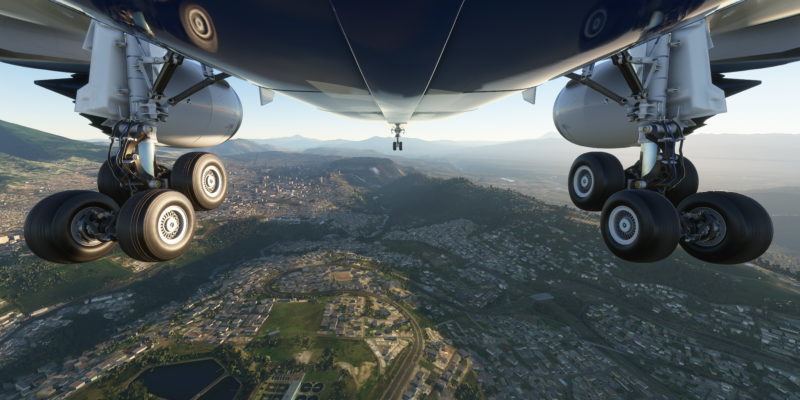 The sky. A place where man previously had no business occupying, yet millions now traverse it per year. Even so, we’re still continuously taken aback by its immense beauty and the sense of freedom that it gives us. This is why Microsoft Flight Simulator is so important — bringing the skies of our world into our homes. This fascination with flight is truly being flown to new heights.

To really sum up why I’ve personally in so amped to play this new sim, my first word as a child according to my old folks was ” bird.” No, that’s not a joke; I, like so many others, have an intense love of flight. Thus, it seemed only natural that I would end up getting hooked on simulators by about the time I was a toddler.

Fast-forward 22 years later, and I’ve clocked in countless hundreds of hours thanks to flight sims. From FS2002 to Century of Flight and the infamous X, where the series has remained stuck at for nearly two decades. Now, we have the next-gen Microsoft Flight Simulator. If the series has ever been more worthy of its tagline “As Real as It Gets”, then it’s with this entry.

The real world comes to your home

Cruising over the beautiful waters of Eleuthera Island in the Bahamas.

It goes without saying that Microsoft Flight Simulator is pushing new boundaries with its visual presentation. Aside from the gorgeous aircraft models, the real showstopper is the world right below you. Traditionally, every flight sim prior has relied on basic, flat textures to cover the planet, as well as simple, auto-generated buildings to represent civilization. Now, though, we have a full-on, completely dynamic virtual recreation of planet Earth in its near entirety.

Powered by the satellite imagery of Bing Maps and 3D map modeling tech from BlackShark AI, the world of Microsoft Flight Simulator offers a near 1:1 representation of real life. Cities and towns both large and small are finally represented in such detail that we really haven’t seen before. If you can recognize your own area from looking at a map, then you can navigate this high-fidelity world that Microsoft Flight Simulator has to offer.

To test this, I took flight over various islands of my own tiny country, the Bahamas. Even in a sparse place like this, the results left me with the biggest grin planted on my face. My home island of Grand Bahama, a place of a mere 30,000 people, is represented in a way that I could recognize. Buildings that I know such as restaurants, apartment complexes, resorts, and yes, even my own house, are all there.

Additionally, zipping over high-detail areas, known as photogrammetry areas, offer an even grander experience. For instance, I’m very familiar with the state of Florida and I’ve always enjoyed admiring its many lakes and grid-planned communities. Here in Flight Simulator, that same marvel of engineering and planning can now be realized right here in my home. Cities like Orlando and its various amusement parks look nearly picture-perfect, and even the smaller, back-country swaths of land like River Ranch are exactly as they should be. 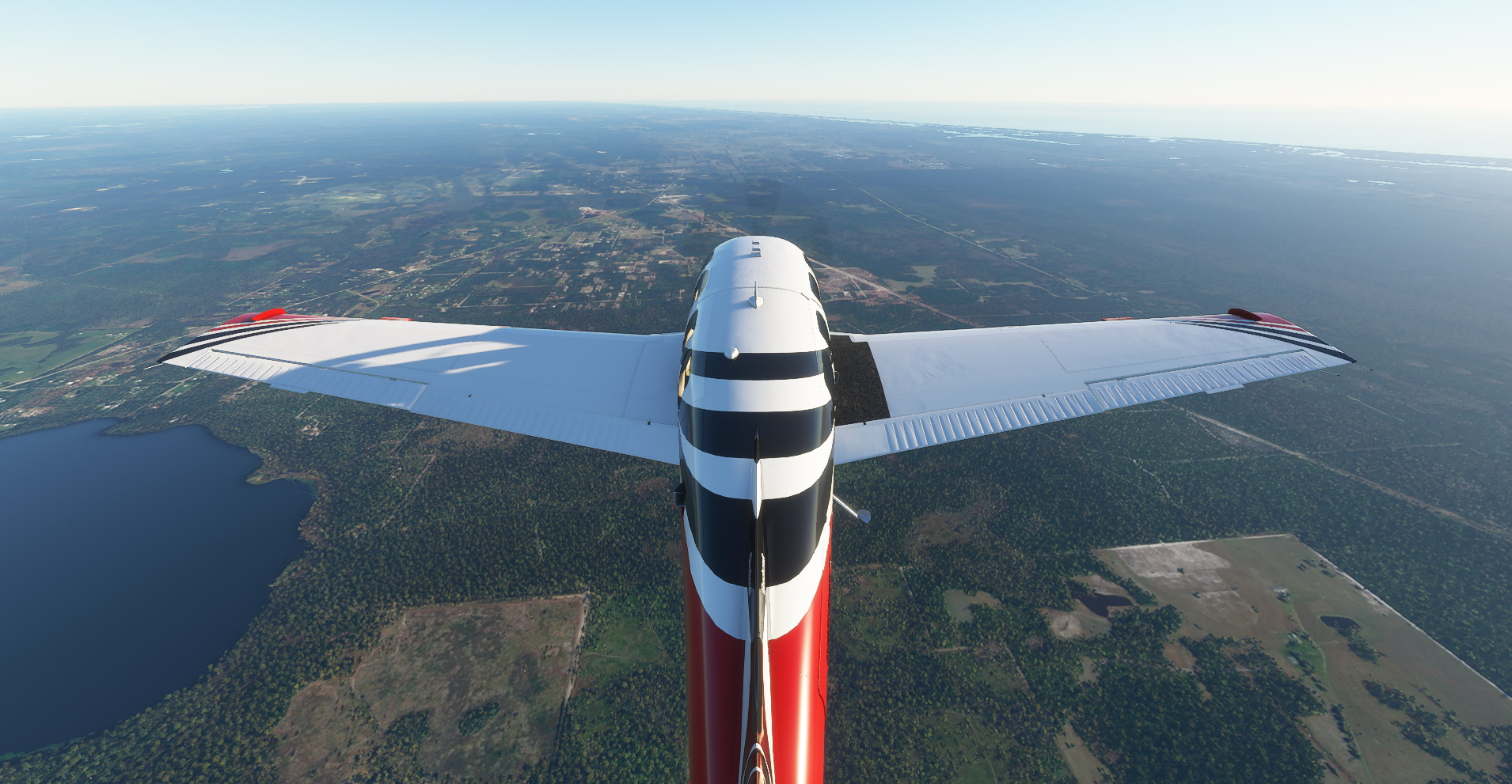 Just about everywhere looks beautiful when this is the viewpoint.

That said, if you get exceptionally close, you will see a few oddities such as unfinished 3D models and satellite imagery that’s a bit wonky. But, when you sit back and consider that this one simulator allows you to explore just about every nook and cranny of the known world, it’s pretty easy to forgive these occasional hiccups — especially when it’s all dressed in the beauty of the game’s graphical engine.

Microsoft Flight Simulator not only eliminates the need for most scenery add-ons, but visual enhancements also need not apply. The lighting engine and special effects are on full display here. Little details like heat exhaust from a plane’s engines make me chuckle, and larger details like the way clouds have an effect on the color of the sky and surrounding scenery have just left me gawking at my screen. Global illumination, light scattering, ambient occlusion — whichever effect and terminology you want to name — it’s present in this title. No matter the time of day, no matter the weather or area, Flight Simulator looks like a work of art. 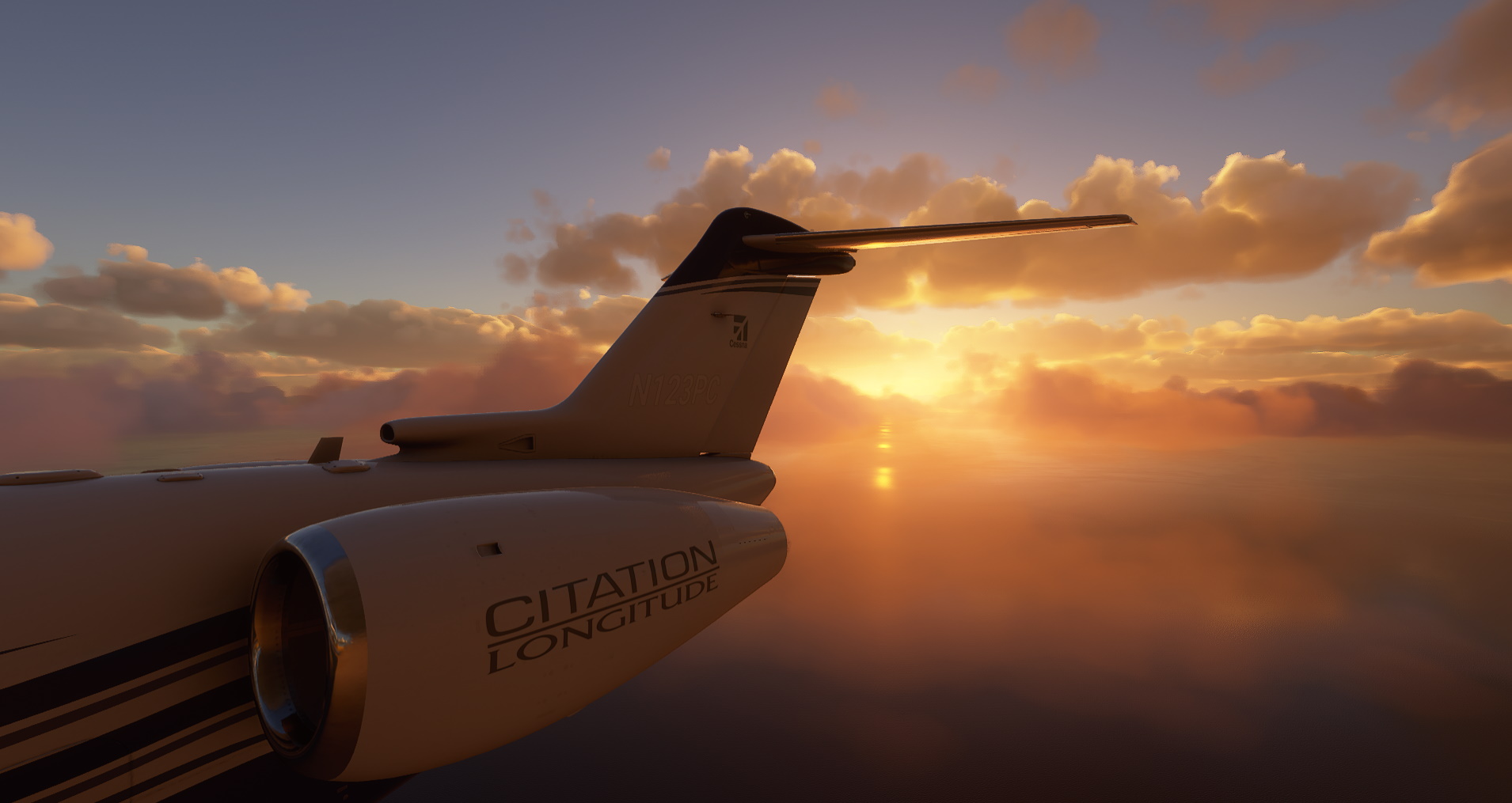 A Citation off the coast of Lima, Peru. I’ve seen the sunsets there and they look JUST as beautiful as this.

As should be expected, to power all of this comes at a cost. My mid-range Acer Nitro 5 laptop is brought to its knees by this sim. At higher altitudes in smaller aircraft, hitting 60 FPS is no problem. Understandably, higher density areas at low altitudes can bring things down. At any given moment, the sim hummed along within the 30-40 FPS range — a performance target that most simmers are familiar with.

To be frank, there were times when it chugs, but that’s because the sim was gracious enough to label my machine as “High-End” during the initial setup. I’m sure if I knocked a few settings down a notch, things would improve. Still, just look at this image below. This isn’t a moment I’d want to add or take away from.

Piloting an aircraft is easy or as hard as you’d like to be here in Microsoft Flight Simulator.

While the lot of us have been focusing on the visuals, some would really want to know how the actual flying is. I’m happy to report that after trying quite a handful of the aircraft, Microsoft Flight Simulator does feel really good. It blows past the on-rails mechanics that FSX had and falls about in line with the likes of modern competitors like X-Plane 11.

To be blunt, X-Plane 11 is still the more technical and arguably “authentic” of the two from a flight model perspective, but that’s only because the super complex add-on aircraft have yet to be released for Flight Simulator. Still, in terms of default aircraft, I really like what’s on offer here. While there is a staggering amount of general aviation compared to airliners, they all look, feel, and sound good.

The weather has a really cool effect on each airplane. The wings of a giant like the Boeing 787 flex under pressure. Meanwhile, a smaller Beechcraft Baron will be jostled and bumped by the turbulence. It’s oddly satisfying to see a plane drift, bounce and sway as it maneuvers through the air, reminding you that you’re just zooming through the atmosphere. This is a far cry above past entries of the series, where aircraft sort of just hung about as they flew.

In the cockpit, while there are a few buttons and switches that have yet to be wired to anything, everything you need and expect to use is quite functional. Little things like the inability to open doors are a bit of a pet-peeve.  For now, what’s really my biggest gripe would be the twitchiness of every aircraft’s rudder system; it’s just way too sensitive. Also, the autopilot can be a bit wonky as well. Regardless of aircraft, it has a haphazard behavior where sometimes it works and other times it doesn’t. 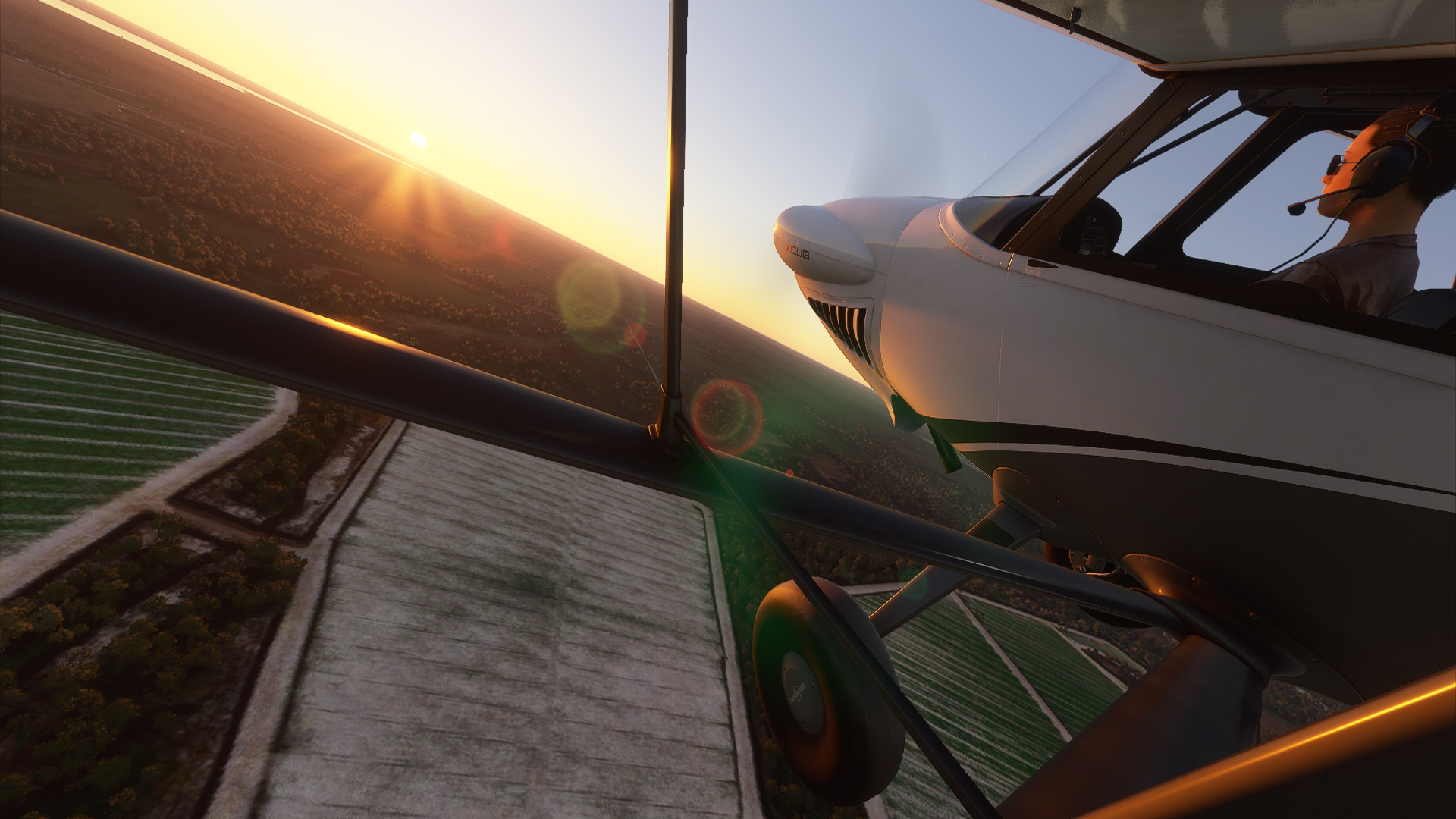 The autopilot system and rudder controls need some tweaking, but nothing some patches can’t fix.

Thankfully I haven’t lost a plane because of that, but it has made some landings and other sections of flight too ugly for me to willingly show. When everything does work, which as it stands is about 80% of the time, it’s a real joy to take to the skies and see a world that’s actually recognizable. And with that all said, this is still a product that will have official support for the next several years. So, all things considered, this really is just the beginning.

These are the hard questions: Microsoft Flight Simulator worth all of the immense fanfare? Has it really spent all this time in hiatus to be worthy of a comeback? Will you get your money’s worth?

My answer is, why are you even asking that? Of course, they’re all a “Yes.”

If you’re someone familiar with the genre, then I’d say getting it would be a no-brainer. No other simulator past or present comes out-of-the-box in this good of a state. For once, the “vanilla version” really is the bees’ knees. Even if you’re a newcomer, this really is the best place to start. Other simulators like X-Plane 11 are not that forgiving to the casual player. But, Microsoft Flight Simulator can be as easy or as technical as you want it to be. You can literally press a button and turn everything on, or you can go knob by knob and button by button if that’s more your speed. 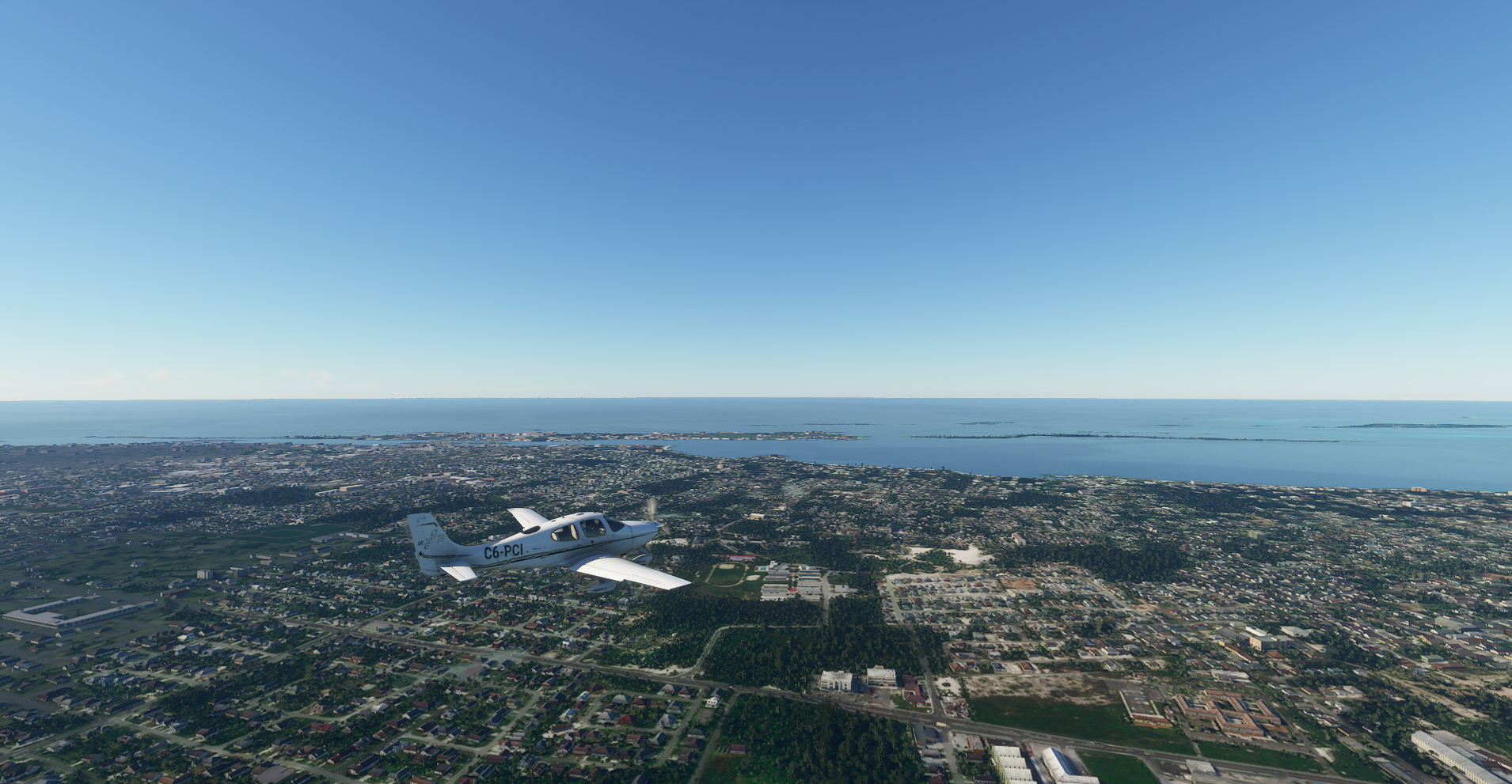 This new generation of Microsoft Flight Simulator has been a long time coming, but the wait has most certainly been worth it. After all my years of virtual flying, I didn’t expect to be smiling like how I did all those years ago when I first found this world at 3 years old. It’s good to be back.

Microsoft Flight Simulator is, by all means, the most complete out-of-the-box package of any flight sim ever. Its advancements have pushed the genre as a whole to an entirely new standard with the promise of ongoing support solidifying its rank as the defacto flight sim for the years to come. While it has its quirks, this really is "As real as it gets".

Final Fantasy XIV wants your screenshots for its anniversary

By Michael Feghali6 hours ago
Reviews