The next expansion for Warframe is almost here, and everyone will be invited to take part of the story. Yes, everyone, including those on the Nintendo Switch this time. Warframe: The New War is a story-driven expansion, bringing cross-play and cross progression for every platform. It was revealed in full during TennoCon this past weekend, along with a 30-minute gameplay demo.

Warframe: The New War will launch for all platforms at once, bringing cross-play and cross progression. If you’re a PC player, that means you can be matched up with those on console via matchmaking. The platforms supported include PlayStation 4, PlayStation 5, Nintendo Switch, Xbox One, and Xbox Series X|S. With cross progression, you’ll be able to move from the office to the couch, or take your Tenno to go on the Switch.

Developer Digital Extremes gave everyone a first look at the new expansion in a lengthy gameplay trailer. The story-focused campaign is certainly not what I was expecting out of Warframe. I’ve played the game before, slicing and dicing through hoards of Grineer while sliding around on my ass. But it has been a while, and The New War looks like a fascinating new take. It puts you not in the role of your own chosen frame, but that of three other stars. The cinematic gameplay trailer opens up with Veso, a Corpus engineer, before moving to the Dax warrior named Teshin. They, along with a Grineer soldier named Kahl-175, are the playable characters of the story. 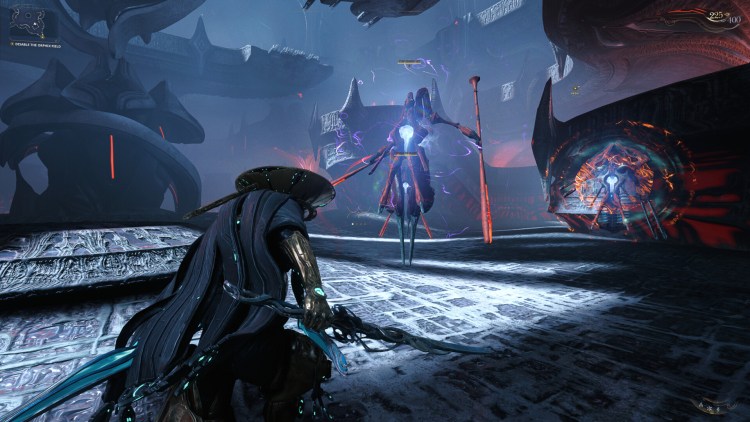 Digital Extremes is being careful not to disclose too much of the story behind Warframe: The New War. But the gist here is that an ancient enemy known as the Sentients have returned to the Origin System, and only the combined might of the factions and Tenno will be enough to stop the invasion.

“Spoilers in Warframe are a closely guarded secret,” remarks Rebecca Ford, live operations and community director of Digital Extremes, in a press release. “For The New War, we want players to be able to catch up on the Warframe storyline, which means we’ll be balancing new content reveals and spoilers as best we can!” said Ford. “This year’s Relay event felt like a real moment, even during rehearsals. I’ve enjoyed many Warframe reveals but to see players relive some of these very personal story moments together, from all over the world, was special.”

The developer is also keeping mum on the exact date we’ll experience Warframe: The New War. However, Digital Extremes is promising that it will launch this year.

Spritfarer developer opens up in documentary by The Escapist