After teasing it for the past couple of weeks, Frontier has now outlined the meaty chunks at the heart of its forthcoming Elite: Dangerous ‘Powerplay’ update.

Said chunks are to do with galactic powers, their role in the universe, and player’s abilities to ally with those powers. Once allied with a given power, people will be able to guide their strategy, take part in special objectives, rise through the ranks (with special perks and bonuses) and, ultimately, have an impact on the balance of power in Elite: Dangerous.

There are said to be “a number” of powers to join forces with, each with their own figurehead, political leanings and methodologies. Some will favour warfare, while others might want to dominate through trade. There will presumably be mining corporations and exploratory organisations too (since that would just make sense, and cover the range of activities players can engage in.)

Here’s an example, in the form of Senator Denton Patreus. Click for a larger version. 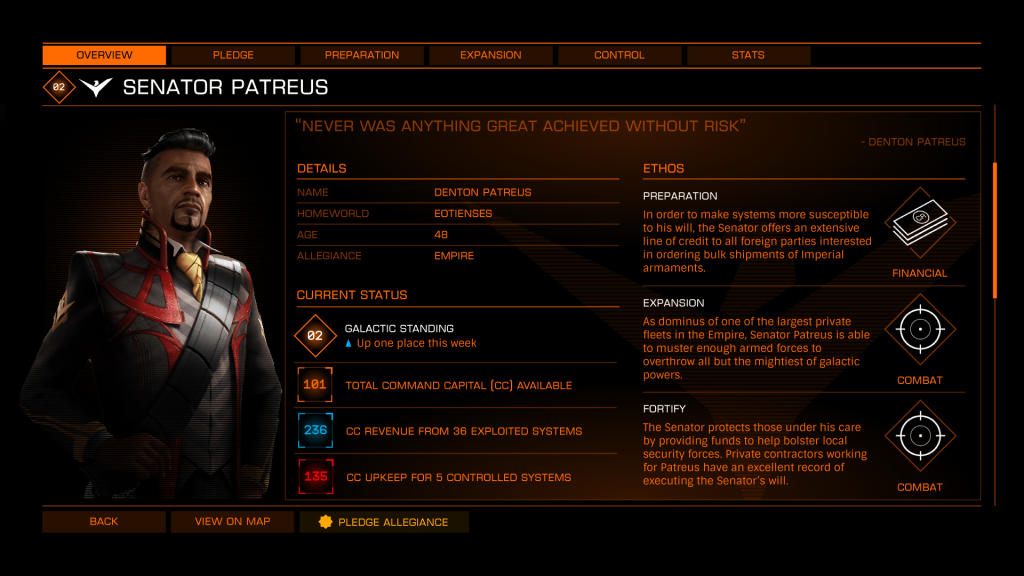 Powerplay will add a new tab to the galaxy map, showing the current state of play between all the various powers. Each ship’s UI will also have a new set of screens, offering an overview of similar details.

According to the newsletter: “All week long players can perform actions to undermine enemy control over systems, fortify your territory against rivals attempting to undermine you, or prepare unoccupied systems for conquest.” Targets of a potential hostile takeover will become hotzones, where rival powers fight for control through battle, trade or other means.

Taking part in such things is, of course, an entirely free choice. Players can continue to be lone galactic wolves with no allegiance, or sign up for a power but only make limited contributions. However, if you wish to dedicate yourself to a certain faction, rising through the ranks will give you a greater say in that power’s actions. “The most valued pilots will have a lot of say in where their Power goes next,” says Frontier producer Michael Brookes.

Here’s an example of the Powerplay decisions screen. 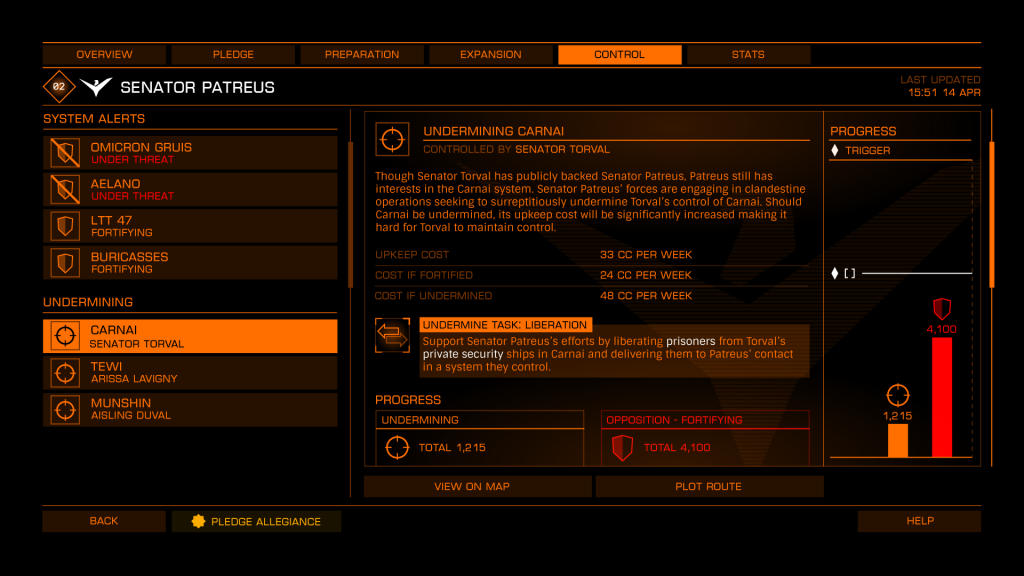 The newsletter states that the number of powers in the universe will ultimately rise to a maximum of twenty, and players will have a hand in which of the minor factions make it to the top. “As [minor] forces establish a foothold across a handful of systems, they may rise to become Powers.”

Leaving a power to join another that’s on the rise is possible, but counts as defection. It’s likely that your former friends will want to take revenge on your treacherous actions.

Also worthy of note is the detail that “The Pilots Federation waives all penalties for engaging invaders in combat during times of war.” So anything goes during fights with rival powers.

Powerplay is a free update and is scheduled for release in May. The update will also bring changes and improvements to missions and mining.