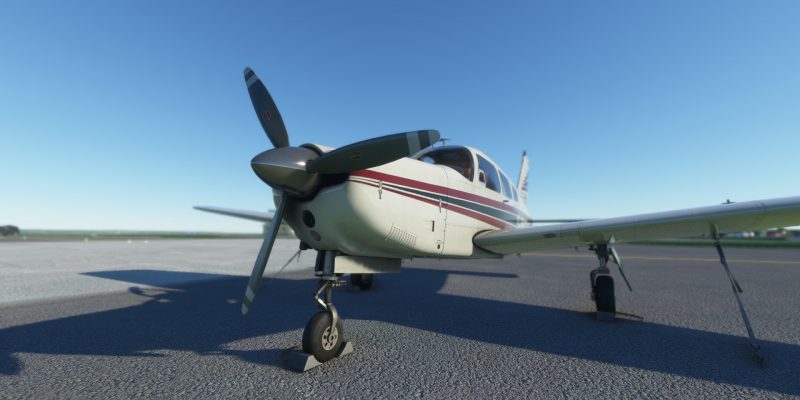 Just Flight, a company that has been producing content for flight simulators for several years, has finally entered into the world of Microsoft Flight Simulator with the release of its Piper PA-28R Arrow III. This is the second company to produce the Piper Arrow III for the sim (Carenado being the other) in the last few months, speaking volumes on the popularity of the aircraft.

The list of included airplanes in either of the three editions of Microsoft Flight Simulator is substantial. But, if you’ve had the sim for some time, you might be itching for something new. While the freeware community has already produced some exceptional projects, there will always be a group of core simmers who value payware aircraft over anything else. And, that’s understandable.

The fact that you’re reading this piece shows that you’re likely one such person. That said, after taking Just Flight’s Piper Arrow for Microsoft Flight Simulator out for a jaunt around the British islands for a few hours of general aviation touring, I can say that this old workhorse is quite the stallion to tame. 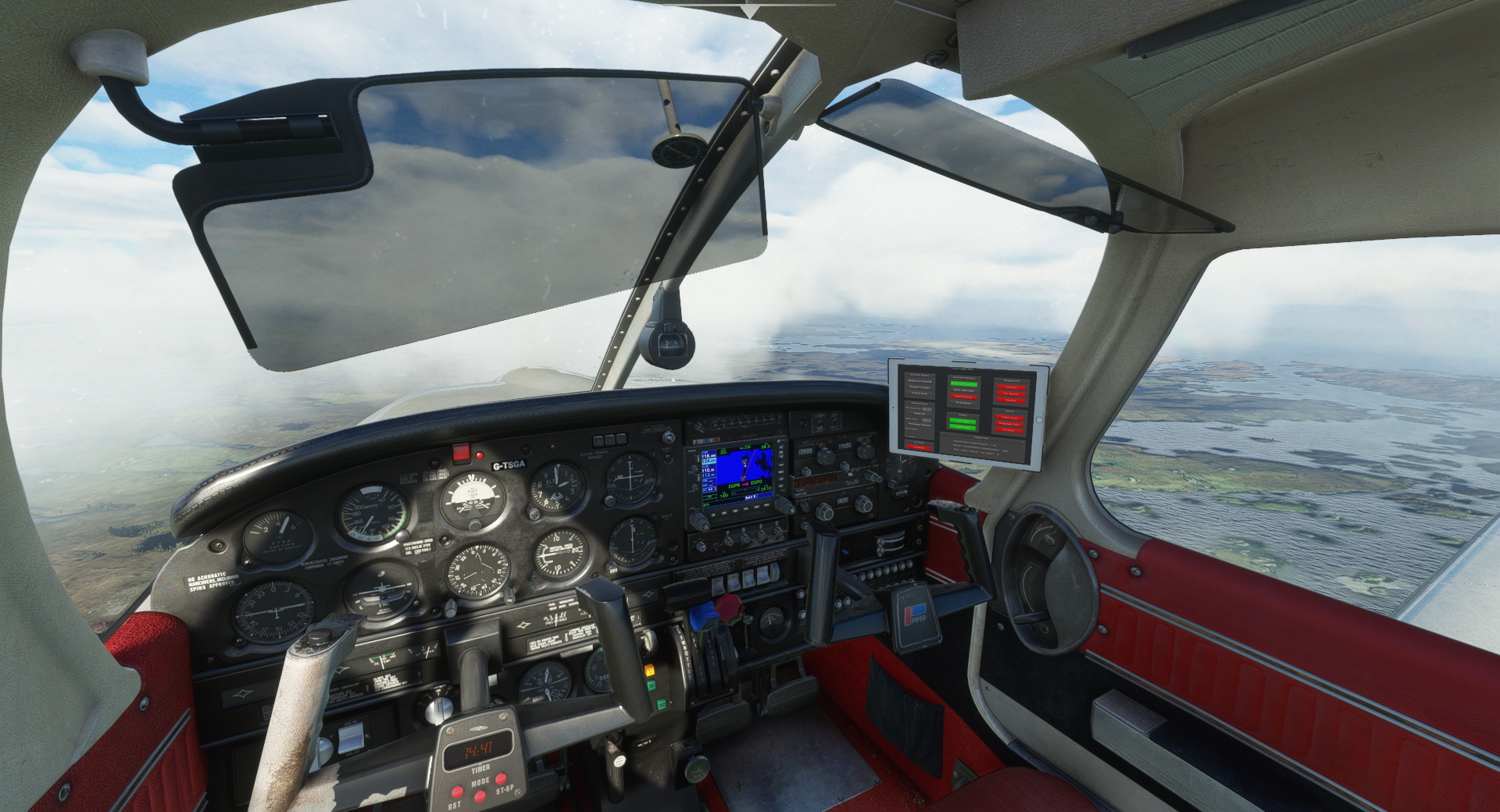 Before we even get into the air, I need to draw attention to the exceptional attention to detail awarded to this plane. Just Flight’s designers conducted research using an actual Piper Arrow III in order to produce this virtual model. And it shows. Its exterior looks stunning with its high-resolution textures. The PBR (physically based rendering) materials make excellent use of the new lighting effects employed by Microsoft Flight Simulator.

Just Flight has also gone the extra mile with the Piper Arrow III. The team included little details like optional tie-downs, chocks, and a tow bar for a dash of additional immersion while you’re on the ground. Another treat is that the passenger and cargo doors can be opened; something we still can’t do on any of the default general aviation (GA) airplanes. This attention to detail carries on into the aircraft’s interior.

The heavily weathered surfaces of the Arrow’s cockpit again show that it’s based on an old but reliable workhorse. The rugs are chewed up and the captain’s flight yolk looks like it can tell some serious stories. This is a far cry from the clean; pristine look that all of the default aircraft have and a welcomed change of pace considering that any Arrow today is several decades old. 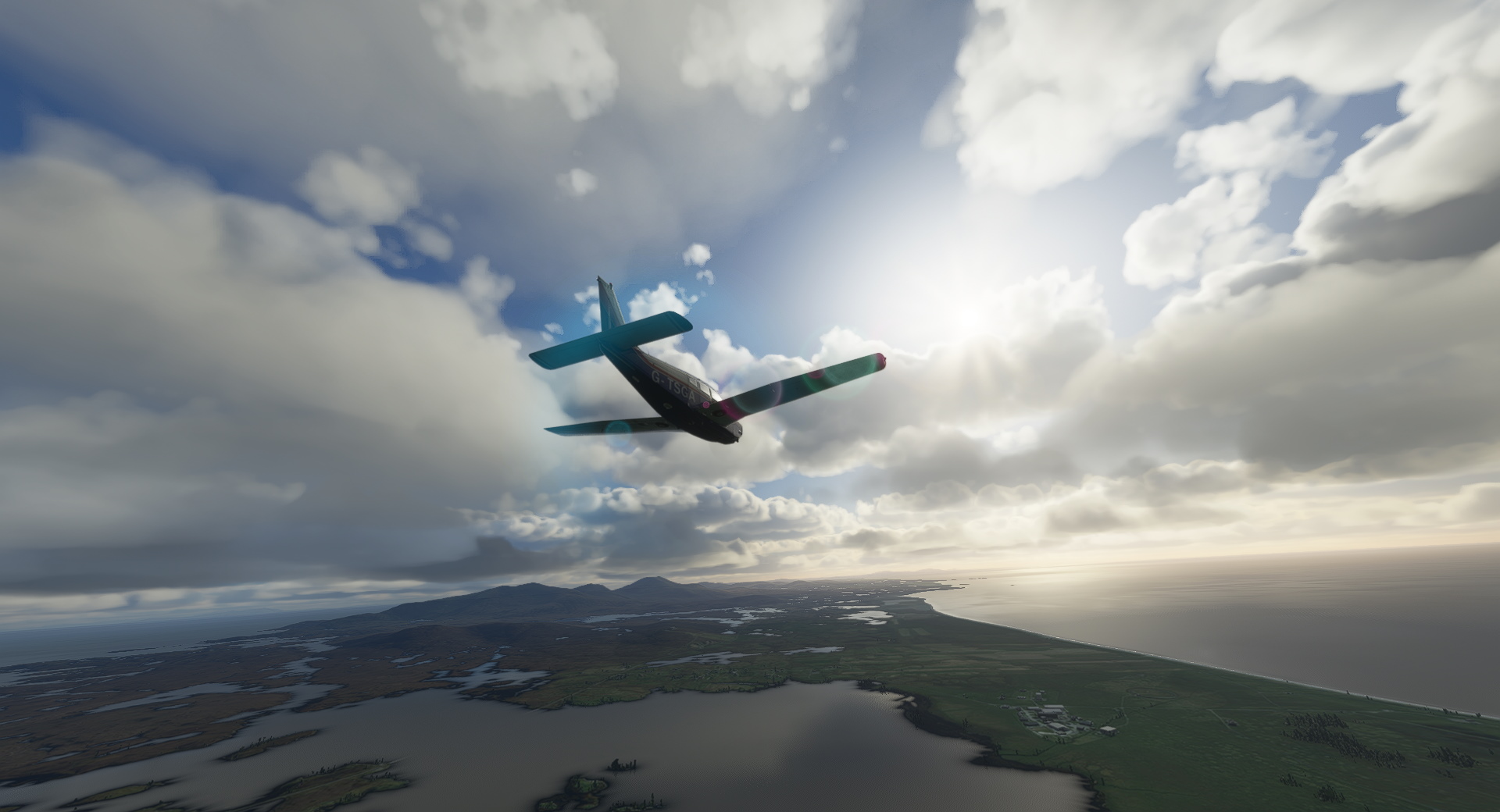 All of the buttons, switches, and knobs are totally functional in the Arrow’s cockpit — no “INOP” pop-ups here. On top of that, there are nice touches present. You can lower and raise the sunscreens at any angle you want, and the mini window on the pilot’s side is also interactive. To digress for a bit, opening the aforementioned window in-flight results in an awesome whoosh of wind blowing into the cockpit. It sounds exceptional, especially when wearing headphones. Even just the plane’s overall sound pack is top quality, with authentic engine audio along with creaks and squeaks of its old parts adding to the immersion factor.

Considering the age of the Piper Arrow III, its avionics are incredibly dated compared to the majority of the default aircraft in Microsoft Flight Simulator. There’s no glass cockpit with a Garmin 1000 that can synthesize the terrain. No sir, the Piper Arrow III is known for being a good instrument trainer, and you better believe you’re gonna have to rely on them in particularly hairy situations. These simple gauges are relatively easy to understand once you know what they’re all saying, so newcomers who are willing to put in a bit of extra research should enjoy this plane.

The Arrow’s simplicity carries on into its implementation of an autopilot system. It’s incredibly basic; it can follow the line you set up in the GPS, but it still needs a bit of a helping hand at times as it may veer off course when you’re not looking. There’s also an altitude hold feature, which I’m still not sure exists in the real aircraft or just an extra thing Just Flight added for the sake of it. It works, but you have to climb and descend to your desired altitude manually. 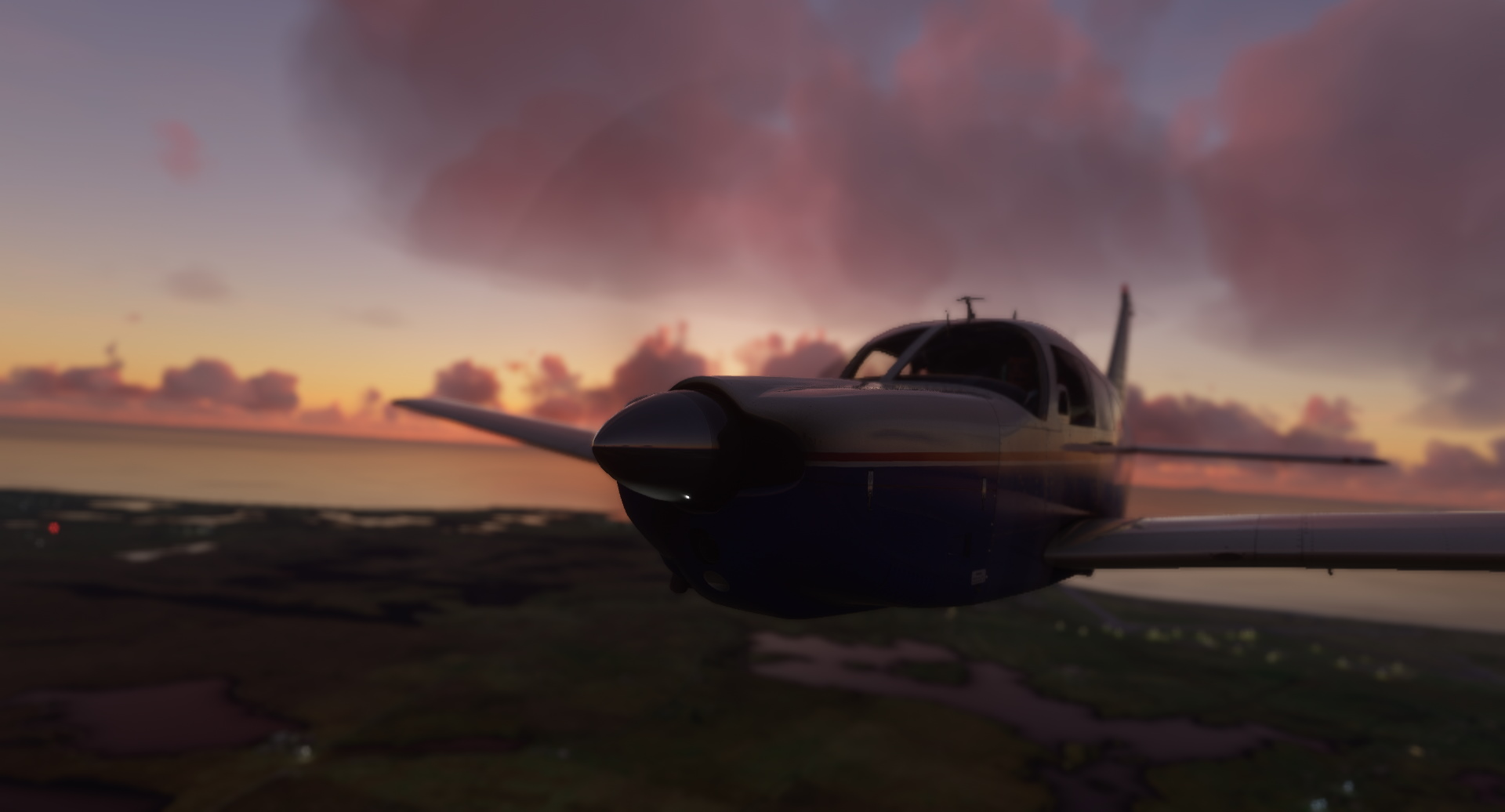 The most modern feature in the cockpit of the Just Flight Piper Arrow III is the EFB (Electronic Flight Bag),  which is basically an iPad that’s mounted to the cockpit that you use to control various features. This is what allows you to open and close the doors, use the ground equipment, as well as quickly perform some actions like setting the aircraft up for start-up and take off. You can also use it to get some digital info like the plane’s speed, altitude, and remaining fuel as opposed to staring at gauges.

The GPS module can also be switched on the fly here: there’s the Garmin 100, 430 and 530. I’ve been sticking to the 530 the most since it’s the closest thing to “advanced.” Although, it’s still primitive compared to any of the GPS systems you’ll find in the default aircraft. The GPS 100 doesn’t even have a map!

As you can tell, Just Flight makes it pretty simple to decide what level of complexity you want your experience with the Arrow to be at. You can go full analog and hand-fly this bird the whole journey, or make use of the digital tricks to just cruise with ease. That said, “cruising with ease” has been kind of hit-and-miss in my experience. 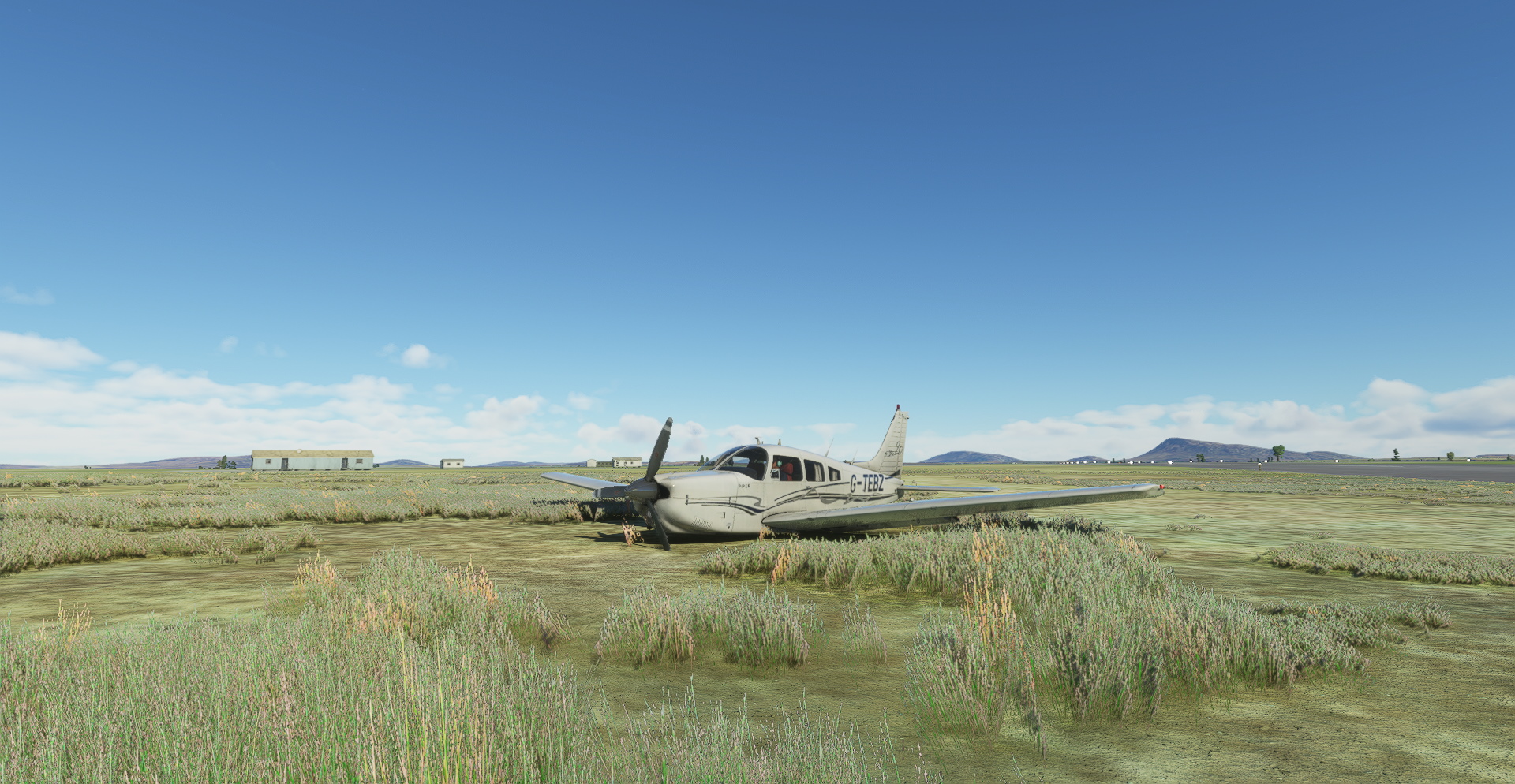 The Arrow handles legitimately well; it’s a straightforward flight. However, it does have some quirks. For one, this is by no means a fast bird. In a strong headwind, I can barely get up past 100 knots. With lower winds and at extremely low altitudes (1,000-3,000 feet), it can putter up to about 140 knots. The 175-knot cruising speed that it sports in the aircraft selection menu is something I’ve only achieved when descending rapidly, so perhaps that was a typo on Just Flight’s part.

I alluded to the autopilot system being a bit sporadic earlier, and it is. I can possibly chalk it up to getting used to the aircraft, but it still seems to be a bit more temperamental than any of the default planes. There was even a flight where enabling it sent the plane into a roll and a dive, something that used to happen with some of the default aircraft. Other hitches include the altitude hold causing the nose to point upward after a few minutes and nearly causing a stall — though this was just one time.

On another occasion, my engine failed less than a mile away from landing, and my gears wouldn’t deploy (I have random failures turned off, by the way). I had to perform a belly landing. In yet another instance, after taking off, the aircraft’s gears refused to retract. The model also seems to be even more touchy with high winds than some of the default aircraft, but this is one thing I can chalk up to being more of an issue with the sim itself. 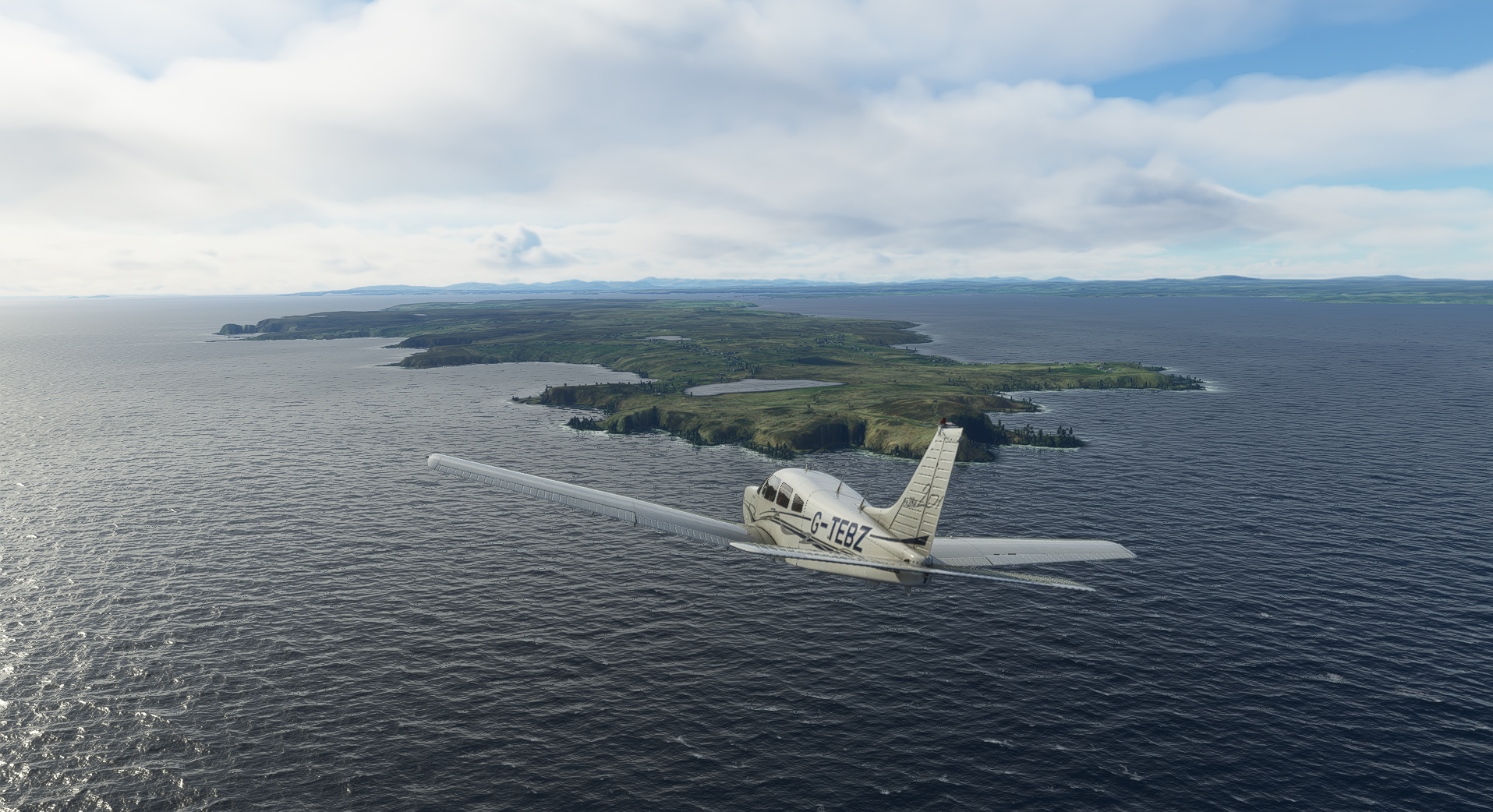 …But still a doll when it behaves

Looking at this laundry list of oddities, it might seem like I’ve had a lukewarm experience with the Just Flight Piper Arrow III for Microsoft Flight Simulator. While it hasn’t been as steady of a shot as expected (pun intended), I’m by no means writing this aircraft off. When everything is nominal, it’s a cool little bug to take around town. While it’s certainly much better for super short hops, you can dare to take it on a multi-hour journey so as long as its quirks don’t kick in.

With a bit of a sweat-inducing $44 USD asking price, I can say that Just Flight’s Piper PA-28R Arrow III is overall a good aircraft, but with some quirks. Whether or not you decide to shoot for it at that price is purely dependent on how much you want a more “realistic” general aviation aircraft. 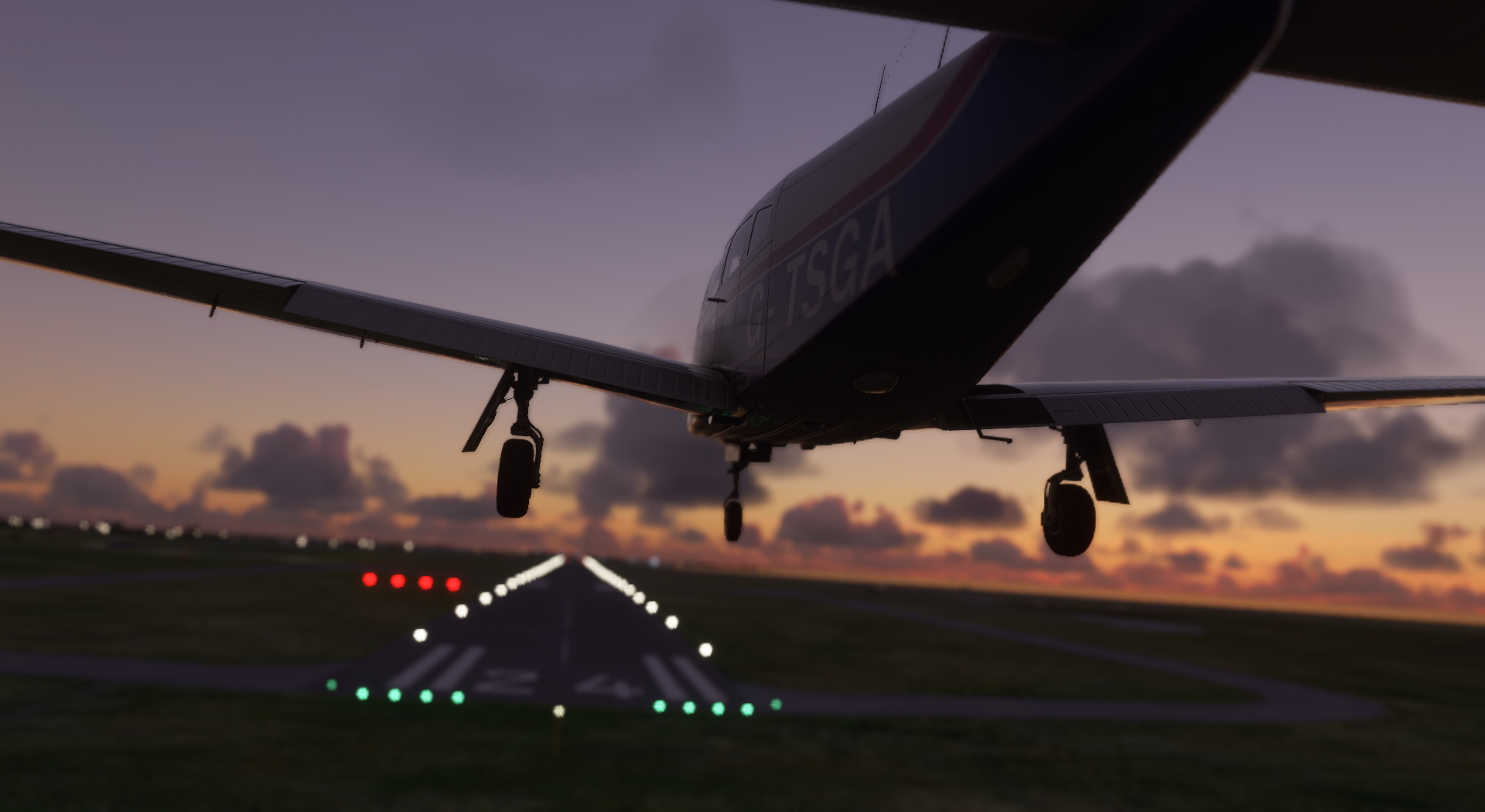 Compared to the default offerings, I didn’t find myself being overly wowed by Just Flight’s Piper Arrow III for Microsoft Flight Simulator. Really, I just find it to be a neat alternative to flying the same handful of my usuals. But, if Just Flight can iron out the rough edges, then this would be even more of a solid offering.