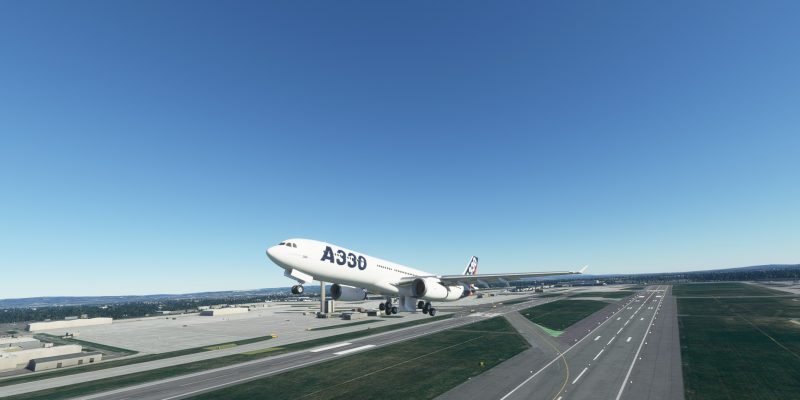 UPDATE (3/3/2021 @ 5:59 PM) — Another member of the Microsoft Flight Simulator community, “tyler58546″, has released a compatibility mod for this Airbus A330 mod that makes it compatible with the A32NX add-on. It can be obtained from FlightSim.to.

As the months continue to tick away since the initial release of Microsoft Flight Simulator, hardcore sim fans continue to wait with bated breath for the build-up of support from the community as it relates to new freeware add-ons and mods. There’s already a decent selection, but what’s lacking sorely is a pool of fresh aircraft. That’s understandable, considering the amount of time and effort it takes to create them, especially for free. But, already there are groups dedicated to providing new birds to the masses for free, and one of them is called Project Mega Pack. As of today, the team has released its latest project: the Airbus A330-300 for Microsoft Flight Simulator.

This new freeware aircraft is a custom-built model that features its own cockpit, custom Rolls-Royce engines (along with an accompanying sound pack), and accurate aerodynamics and flight behavior. That said, it does still use some systems from the Airbus A320 (like in real life). For that reason, if you happen to have the much-loved A32NX mod installed, then you’d need to remove it in order for the new Airbus A330 to function properly. As team leader “Clink123” confirms, the A330 is compatible with the A32NX, but the A32NX is not compatible with the A330 due to it overriding some core gauge files. If you don’t intend to fly with the A320 much after installing this new add-on, then removing the mod shouldn’t be too much of an inconvenience. The Project Mega Pack team is currently investigating a way to have both installed side-by-side without causing conflict.

The new add-on works just as you’d expect. The usual control surfaces and features like the engine blades, flaps, ailerons, lights and landing gear are all functional and well animated. The cockpit is well detailed, though not every system is functional at this time; the ones that matter are intact, however. This release is still considered to be a “beta” version, so more updates will be steadily rolled out as time goes on.

Project Mega Pack’s Airbus A330 for Microsoft Flight Simulator should serve as a solid alternative to the default A320 for medium-long haul flights. It’s much larger and has a longer range, making it more comparable as the Boeing 787 in terms of use-case (though it’s not nearly as advanced). Seeing that the latter aircraft is only available to Premium Deluxe owners of Microsoft Flight Simulator, then the A330 should certainly fit well in your collection for a large airliner that can serve as an alternative to the default Boeing 747 if you don’t have access to the 787.

The team has made sure to include some additional liveries for the A330 that include airlines from all over like Air France, Air Canada, Delta, Lufthansa and Lion Air—just to name a few. That’s a separate download, however.

In order to gain access to the plane and/or its liveries, you’ll need to visit Project Mega Pack’s Discord server. A link on their main website will be going live at a later date.

In addition to the Airbus A330, Project Mega Pack is also working on bringing the Boeing 737-800, 747-400, and MD KC-10A Extender over to Microsoft Flight Simulator. The team did port over the default Mistubishi CRJ-700 from FSX a few months ago, but that has since been removed and is being reworked. What is available now however is the Airbus A321-200, another port-over from FSX that’s being upgraded for Microsoft Flight Simulator.