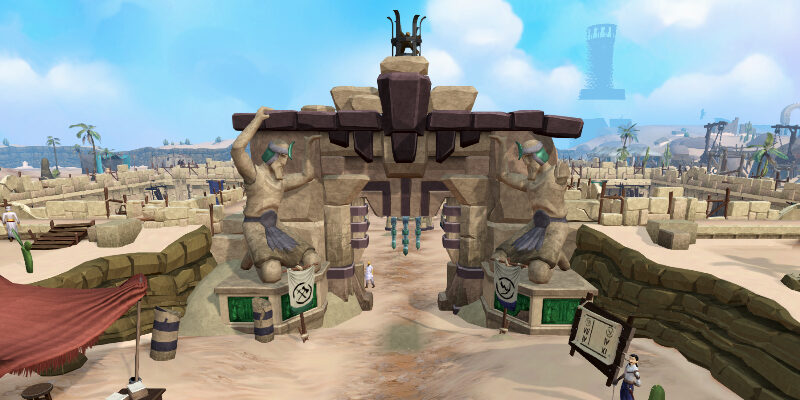 Real-world trading and gold farming have been a problem in RuneScape ever since its release twenty years ago. Developer Jagex has punished players for engaging in these activities for some time but is now implementing stricter penalties. Details of these new measures against players who buy gold were posted in a developer blog on the RuneScape website titled “Game Integrity: Real World Trading.”

Previously, Jagex focused on handing out bans primarily to gold sellers. These are the people who farm gold in-game and then sell it to other players in exchange for real money. However, following today’s change in stance these stricter rules will extend to gold buyers too. Under these new rules, both parties involved in any rule-breaking transactions will be considered equally guilty.

Clamping down on real-world trading

At least at a surface level, real-world trading doesn’t seem too problematic. What’s harmful about a few RuneScape players wanting to ease up the grind and buy gold? Unfortunately, the reality is that gold farmers have a very negative effect on the game’s economy.

Gold farmers use bot farms to farm gold as efficiently as possible. These farms consist of large numbers of fully automated accounts running on scripts that perform specific activities that earn gold over time. Some of RuneScape‘s largest bot farms number well into the thousands of accounts running at once.

These bots significantly devalue skills, bosses, and events that would otherwise be good moneymakers for regular players. This is because they flood the market with the drops or rewards provided by these activities. An increase in supply without an equivalent increase in demand drops the value of any rewards earned.

Jagex has decided that banning the sellers alone isn’t enough to tackle this problem. In the blog, it states that “buyers fuel demand – and higher demand means more sellers, more bots to remove and more nefarious activity.” In other words, Jagex is punishing RuneScape players who buy gold in order to reduce the demand for gold farmers to take advantage of. Jagex has been contacting suspected accounts today to issue a final warning. Any further offenses will result in permanent bans.

Death of the Duel Arena

Banning gold buyers isn’t the only step Jagex is taking to overcome real-world trading. In the near future, it will also be removing the Duel Arena from both RuneScape and Old School RuneScape.

The Duel Arena is a popular PvP minigame where players can fight each other for in-game stakes. The idea is that two players can have a friendly contest and put some wealth on the line to make things more interesting. However, this doesn’t work in practice.

Whilst Jagex considers the best way to remove the Duel Arena temporary measures have been put in place to control the aforementioned issues. Moving forward, players will only be able to stake up to 50 million gold per duel. But by early 2022 it hopes to completely replace the Duel Arena with a “brand new experience that’ll be part of the ongoing Elder God Wars storyline.”