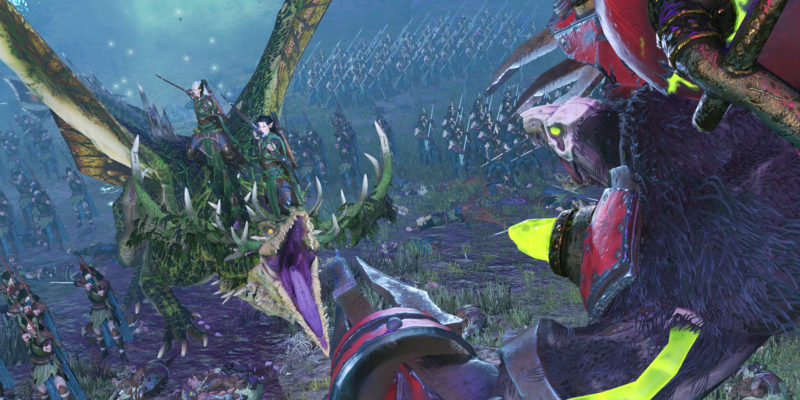 The next Lords Pack DLC for Total War: Warhammer II is finally here. The Twisted & The Twilight sees a showdown in Naggaroth between Throt the Unclean of Clan Moulder and the Sisters of Twilight who lead the Heralds of Ariel. If players pick the Skaven, they can use Throt’s Flesh Laboratory to augment units. Conversely, the Wood Elves gain new and improved items from Lord Daith.

Still, much like previous Total War: Warhammer II DLC releases, we do need to know if The Twisted & The Twilight is worth grabbing now. Likewise, we need to take a look at the Wood Elves rework and the FLC lord Drycha.

As mentioned earlier, Total War: Warhammer II – The Twisted & The Twilight pits the forces of Throt the Unclean against the Sisters of Twilight. Lore-wise, this is quite unlike Creative Assembly’s previous offering, The Warden & The Paunch. That DLC followed Grom the Paunch’s invasion of Ulthuan, the High Elf island that Eltharion the Grim sought to protect. That incident was even mentioned in Warhammer Fantasy Battles‘ lore. As such, The Twisted & The Twilight is more of a “what if” scenario, a turbulent tango between two factions.

The first, Clan Moulder led by Throt the Unclean, is filled with Skaven monstrosities and creations. Throt is also flanked by his greatest creation, Ghoritch, a Norscan berserker who has been fused with a rat ogre. The second faction is known as the Heralds of Ariel and is led by the Sisters of Twilight, Naestra and Arahan. The formidable twins plan on defending the Witchwood of Naggaroth and, eventually, awakening Ariel herself. Both Ghoritch and Ariel function as legendary heroes in the game and they level-up normally. 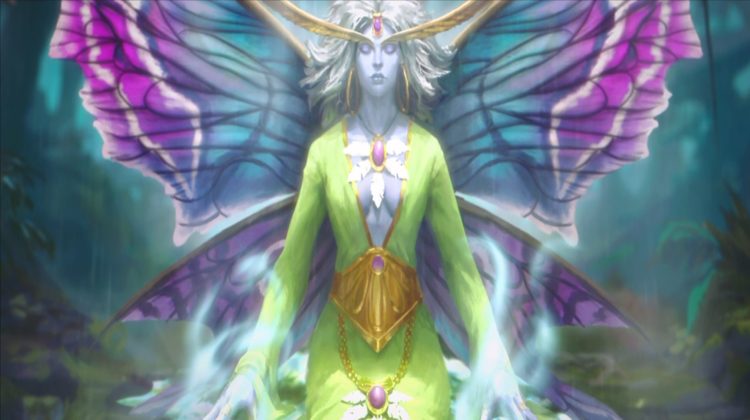 I’ve gotta hand it to Creative Assembly here because Throt the Unclean is absolutely fun to play as. His unique mechanic, the Flesh Laboratory, allows him to infuse Skaven units with various mutations and buffs.

A little bit of RNG is involved, too, as mutations could cause instabilities. When a unit becomes unstable, they’ll obtain some penalties which can be tough to offset. The most common is their replenishment, making them degrade a lot faster until they die. 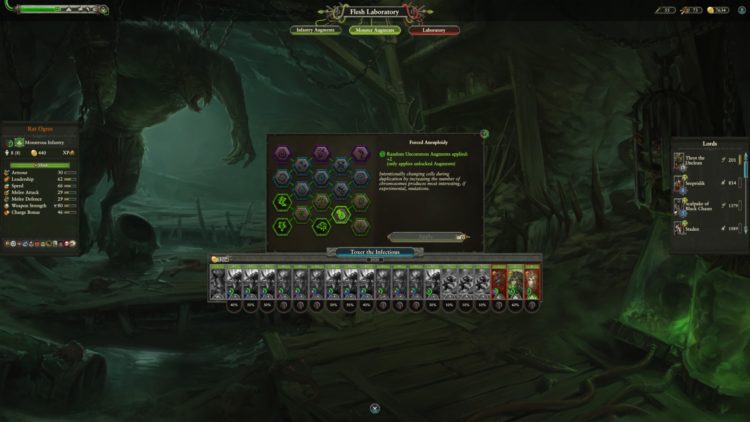 Still, you don’t have to worry too much because you can sacrifice these units to gain Growth Juice. At certain thresholds, the accumulated Growth Juice allows you to obtain extra units from the recruitment pool. These include Wolf Rats, Brood Horrors (giant rats), Mutant Rat Ogres, and Hell Pit Abominations. Likewise, a new hero type, the Packmaster, confers more boons.

All in all, Total War: Warhammer II – The Twisted & The Twilight makes a monster-heavy Skaven army extremely viable when led by Throt the Unclean. The experience is highly entertaining and vastly different from how you’d approach campaigns as Clan Pestilens (poison and plague focus) or Clan Skryre (artillery and weapons teams). 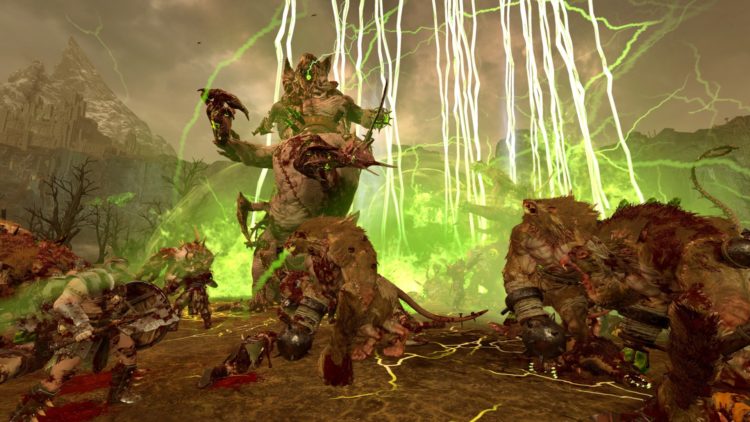 Unfortunately, I can’t say the same for the Sisters of Twilight. The faction’s unique mechanic involves the Forge of Daith, allowing the twin maidens to gain rewards from the legendary Elven smith. Every 10 turns, Daith will let you select a gift (which is usually a green item).

Moreover, after you’ve won a battle, Daith lets you choose whether Naestra or Arahan receives a blessing. If you pick Naestra, an item in your pool gets its rarity upgraded. Alternatively, picking Arahan will turn that item into a unique/purple version. This enchantment is only temporary, lasting just five turns. 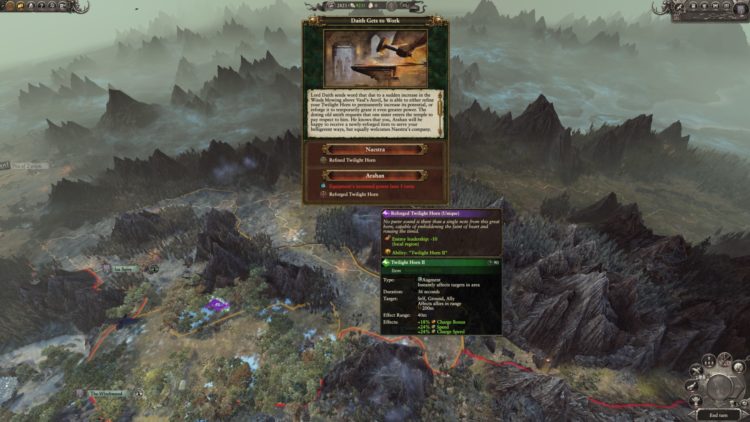 The downside is that this system feels a little passive and tacked on. At best, you’re just looking at dilemma pop-ups and event notifications. Very few of these actually affect your overall progression in the campaign or your armies. For the sake of comparison, Prince Imrik had more unique mechanics, and he’s an FLC lord.

Anyway, I do wish there were more events involving Ariel since you’re playing as a faction called the Heralds of Ariel. The sad part is that trying to get Ariel to appear and attempting to heal a couple of forests to start the final battle turn into a tedious waiting game. 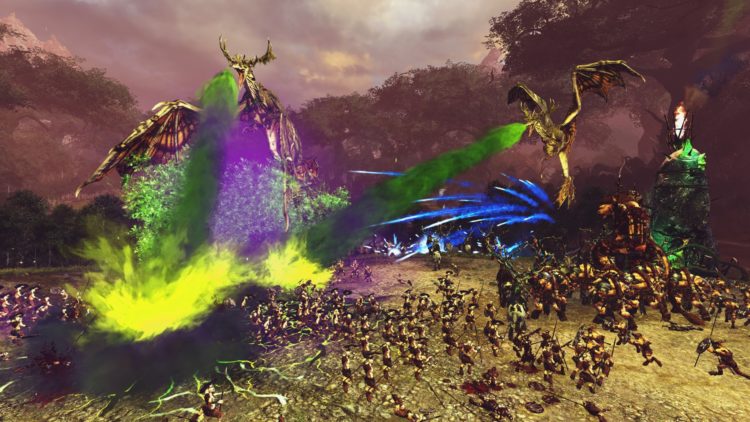 Drycha and the Wood Elves rework

A couple of key factors we have to talk about are the Wood Elves rework and the addition of Drycha, the FLC lord. Granted, these aren’t technically part of Total War: Warhammer II – The Twisted & The Twilight. The Wood Elves rework is free to all players. As for Drycha, you need to own the Realm of the Wood Elves DLC from the previous game to unlock her (she’s only playable in the Mortal Empires campaign).

In terms of reworks, the one for the Wood Elves has both upsides and downsides. The changes to Amber, the healing of forests and controlling of heathlands, and traversing the campaign map via the Deeproots system are all wonderful tweaks and updates to a long-neglected race. However, as cited earlier, healing magical forests becomes tedious. Additionally, you could find yourself playing whack-a-mole with random rebels and forest encounters when you’re stretched too thin (and the Wood Elves’ economy doesn’t help matters either). If you simply play defensively while sacking and razing nearby territory, you’d just bolster other factions that’d capture weakened or ruined settlements

As for Drycha, you’re looking at a faction leader with a smattering of expendable Wood Elf units. But, the bulk of her army will be made up of dryads, treemen, and even wild beasts. Likewise, she’s got Coeddil as a legendary hero to bolster her forces. Her mechanics actually feel more unique than what Naestra and Arahan have. 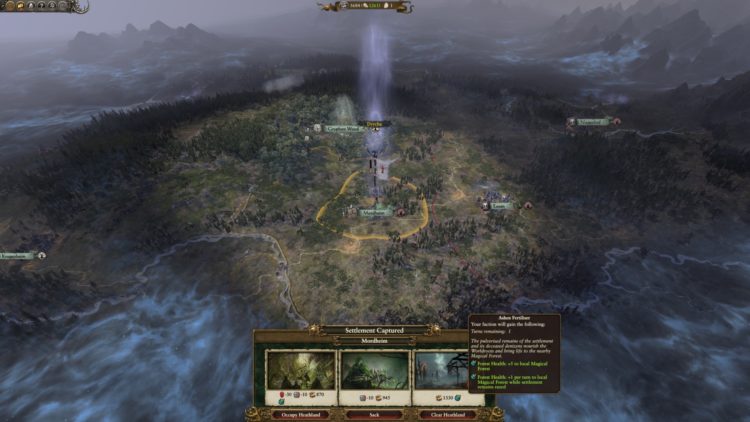 That brings us to what exactly Total War: Warhammer II – The Twisted & The Twilight provides. For the most part, you’ve got a very enjoyable campaign as Throt the Unclean. On the other side of the coin, you’ve got the Sisters of Twilight, and their faction’s just underwhelming. As with previous Total War: Warhammer II Lords Pack DLCs, there might be instances when the two leaders aren’t evenly matched — one tends to trump the other. Examples include Grom’s Cauldron and cooking recipes one-upping Eltharion’s Warden’s Cage mechanic, as well as Markus Wulfhart’s legendary hunters’ quests being more engaging than whatever Nakai’s supposed to do. This is evident in this DLC, too, since going from a Clan Moulder campaign to the Heralds of Ariel feels like a step down.

In the end, however, Total War: Warhammer II – The Twisted & The Twilight won’t set you back by a lot. Plus, it manages to give you a great campaign as Throt the Unclean and the Skaven of Clan Moulder. Sadly, if you want to experience the best of what the Wood Elf rework has to offer (even if it’s a little rough around the edges), then the Realm of the Wood Elves DLC provides the most bang for your buck. 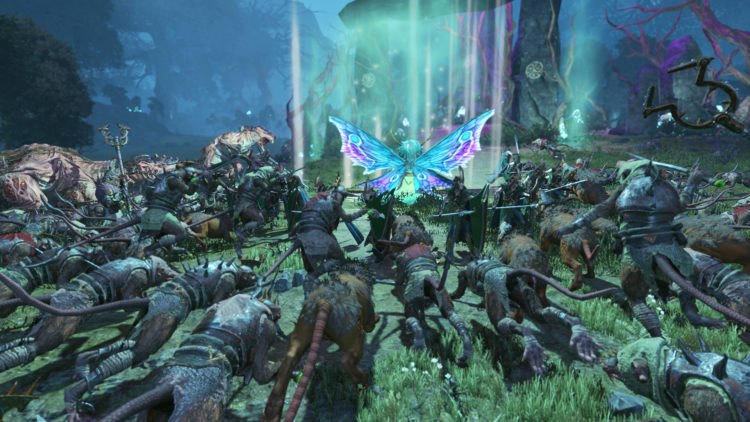