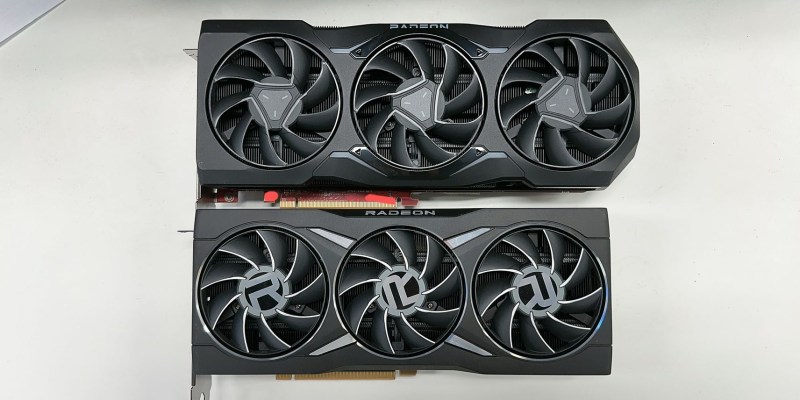 On Thursday, November 3, we’ll finally get to see the full reveal for AMD’s Radeon RX 7000 Series based on the RDNA 3. The presentation will showcase the reference designs by AMD, specs, performance benchmarks, new features, and hopefully prices. Fortunately, we get a nice little preview thanks to HXL on Twitter that appears to be legitimate.

The leaked photos contain two snapshots of the graphics card design next to the prior gen RX 6000 Series. One photo is an overhead view of the fans, while the other is a sideview to show cooler depth and the like. The photos appear legitimate, and fully consistent with AMD’s own sneak preview from earlier this year during the Ryzen 7000 Series reveal.

We can easily see some similarities to the RX 6000 Series, which served as the point of reference and inspiration for the successive design. Just like how cars seem to get sleeker each gen, it’s the same deal here. However, it’s important to note the various characteristics that demonstrate this design is clearly updated to look and perform better.

AMD expanded the size of the Radeon RX 7000 Series cooler design to be longer, and perhaps a hair thicker. It’s hard to judge from just photos, and the sideview of the cooler can be deceiving as well. This is where the improvements are evident. The prior gen design received criticism for the cover plates that obstructed some of the cooler airflow. This has been effectively done away with around both the edges of the shroud and the power connectors. This should help to keep the new cards running cool, which will also be necessary if power consumption is up this gen.

Since power connections are trending in the news thanks to Nvidia’s RTX 40 Series 12VHPWR adapter failure reports, it’s also worth noting that AMD’s apparently powering these cards with the traditional dual eight-pin design that will work with existing PSU cables.

We’re just a few days away now from the official reveal of AMD’s Radeon RX 7000 Series graphics cards. We’ll provide updated analysis shortly after. As a final note, do remember these photos are unofficial for now and should not be fully regarded as fact.

How to build the best Modern Warfare 2 VEL 46 class