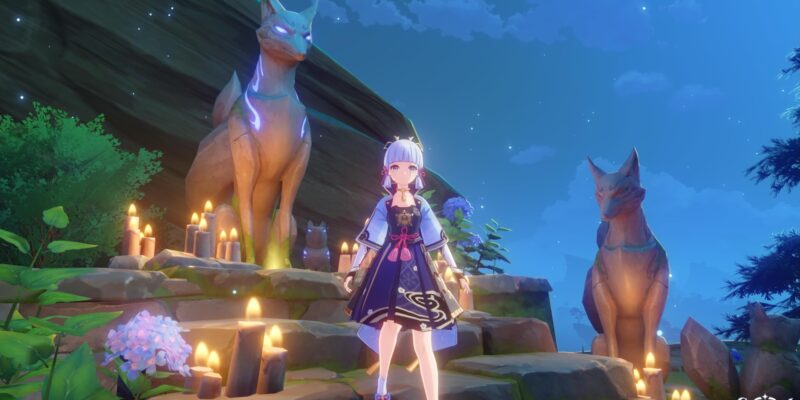 Once you’ve cleansed the corrupted area in Konda Village, Kazari will ask you to go to a new location called the Abandoned Shrine. It’s just northeast of Konda Village. You can either follow the pathway leading to the burnt fields near Mt. Yougou or use the Grand Narukami Shrine fast travel point to glide down. Here’s our Genshin Impact guide to help you with the Sacred Sakura Ritual in the Abandoned Shrine, a sidequest that also rewards you with the Memento Lens gadget.

Earlier, I mentioned that a lot of strange things are happening in Konda Village. Well, prepare to see more spooky stuff in the Abandoned Shrine.

Here, you’ll find a lot of odd instances, especially when you consider the Mysterious Shadow puzzle in this area. 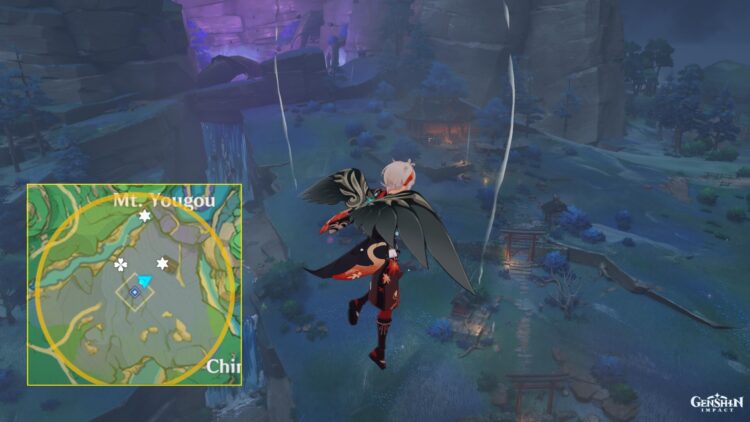 Simply put, the Mysterious Shadow is a specter of a shrine priestess. First, interact with the initial ones that you see (you’ll notice that they’ll disappear).

Then, check out the giant Sky Fox statue. You’ll be told of these clues: 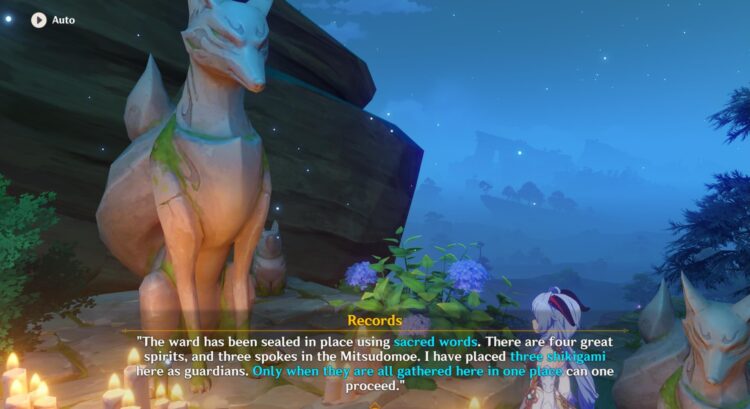 The guardians refer to the Mysterious Shadow ghosts. There are three, but they tend to have additional copies:

With all three Mysterious Shadow specters gathered, you can interact with the glowing marker to receive a fairly lengthy note. 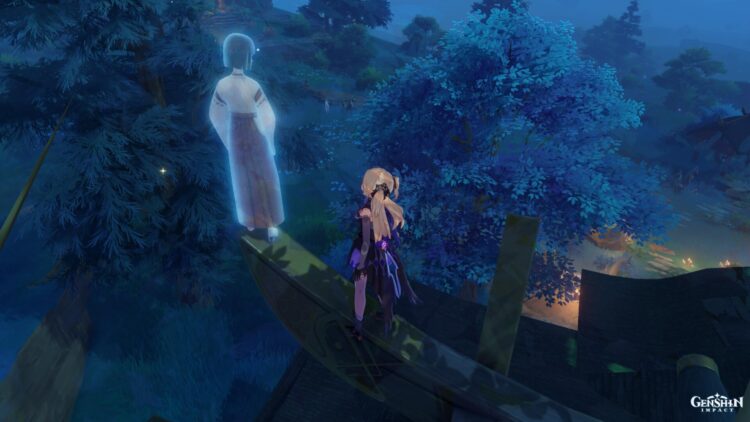 Your next task is to head to the Grand Narukami Shrine. One of the priestesses here tells you that you have to discover what the three important phrases are. To do this, she hands you the Memento Lens gadget.

Return to the Abandoned Shrine and equip the gadget. You’ve probably noticed several small fox statues with a bluish glow. These are called Earth Kitsune. When you activate the Memento Lens and focus on a particular Earth Kitsune statue, it’ll reveal a particular secret or memory.

Try to use the Memento Lens on the Earth Kitsune here: 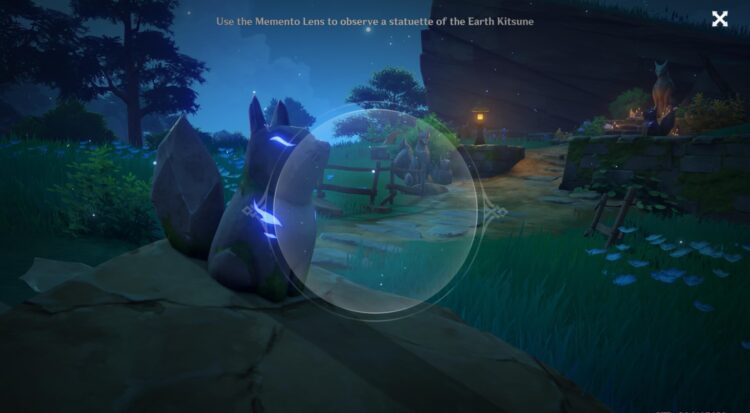 When you’re done replaying the memories, you’ll learn of the sacred words. Interact with the giant Sky Fox statue and reply with the following: 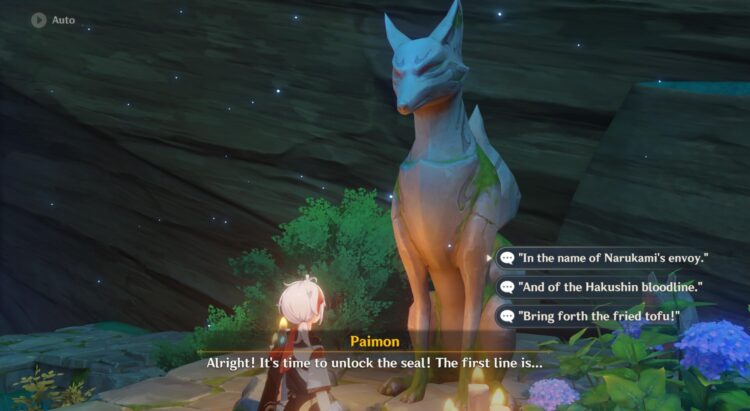 The Sky Fox statue will hand out the ward that you can use to cleanse the corrupted area. So, where is it exactly?

Well, simply head southeast and fall down the cliff (if you haven’t collected it yet, you’ll find an Electroculi here as your marker).

Use the Rust-Worn Key that you picked up in Konda Village to open the locked gate. 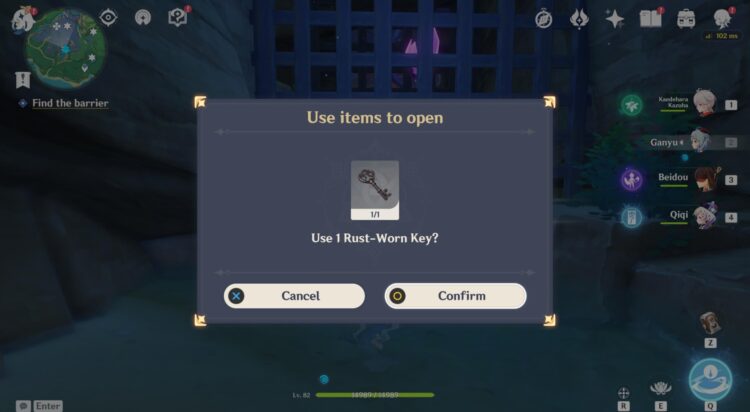 The decayed area in the Abandoned Shrine has its own unique pattern: 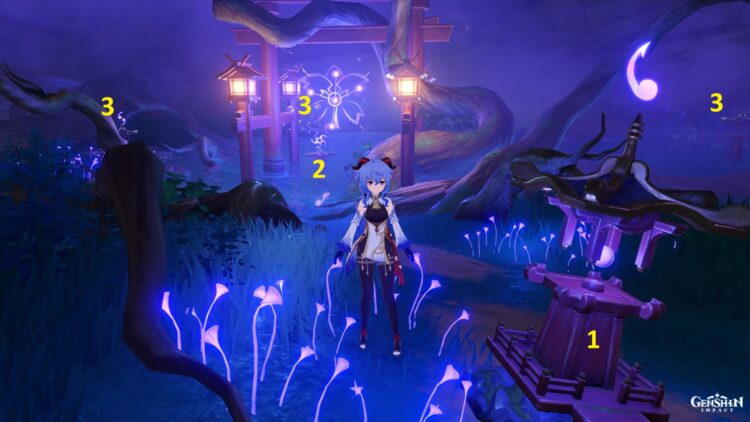 After making the correct changes, click on the main switch to pray and activate the laser. This will spawn another one of those elite Nobushi samurai. Kill it and Kazari will pop up. Once again, she’ll thank you for your help. But, that’s not all, she adds that there are three more corrupted areas in Inazuma, all part of Genshin Impact‘s Sacred Sakura Cleansing Ritual quest chain.

These can be found in Chinju Forest, Kamisato Estate, and Araumi. The last one, Araumi, is actually fairly important. Since you now have the Memento Lens, you can use the gadget to delve further. It’ll then reveal a secret passageway to the underwater teleporter and domain near where you fought the Perpetual Mechanical Array. 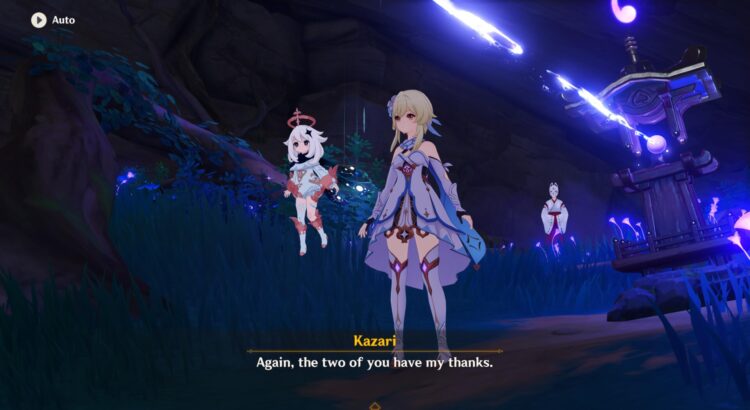 Recompile is like life as a computer program, which involves giant spider viruses