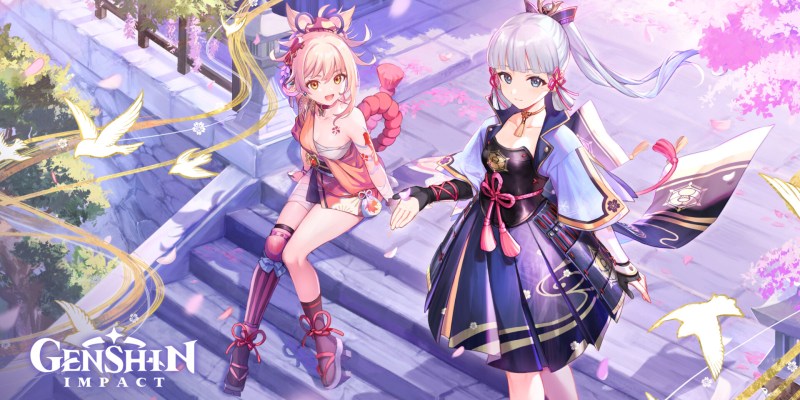 The version 2.0 Inazuma update of Genshin Impact is, without a doubt, the biggest one yet. Your journey continues ever onward as you explore a massive region, the game’s own depiction of Japan. You’ll solve numerous puzzles, discover countless secrets, pick up various collectibles, meet characters such as Ayaka and Yoimiya, and push the story further. Here’s our Genshin Impact Inazuma guide and overview to help you with the version 2.0 update known as “The Immovable God and the Eternal Euthymia.”

Kazuha was the first character from Inazuma to join your roster via wishes. Now, in Genshin Impact‘s version 2.0 Inazuma update, you have a chance to obtain Kamisato Ayaka thanks to her featured banner known as “The Heron’s Court.” The scion of the Kamisato Clan tries her best to aid people despite the tyrannical rule of Baal, the Raiden Shogun and Electro Archon. You can learn more about Ayaka in our character build/weapons/artifacts guide. Likewise, we’ve got a Sakura Bloom farming guide to help you with her ascension material.

Once Ayaka’s banner ends on August 10, we’ll see the arrival of Yoimiya. This girl loves fireworks, and her arrow shots are explosive to boot. A 4-star character, Sayu, will also be part of Yoimiya’s banner. 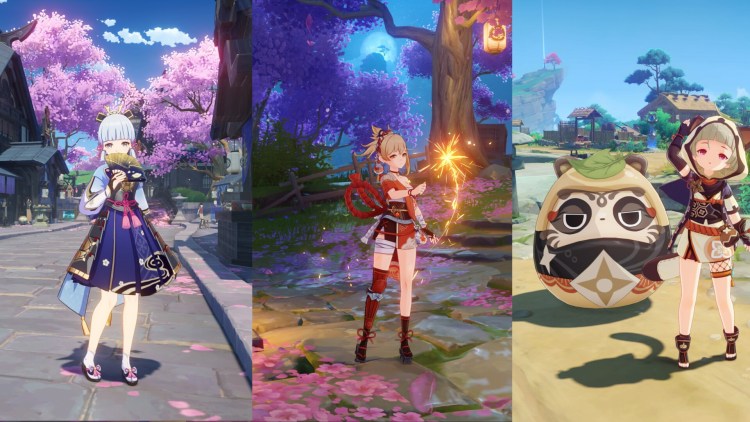 The continuation of the Archon quest and other stories

Your arrival in the region will be filled with intrigue as you learn more about the Raiden Shogun’s Vision Hunt Decree. The first act of the Archon quest takes you on a long trek across Narukami Island leading to a meeting with Ayaka and Thoma.

Past this point, you’ll help out Ayaka in the “Grus Nivis Chapter” story. Likewise, you’ll have a run-in with Yoimiya in the “Carassius Auratus Chapter” mission. When you’re done with these, the stakes get higher in the second act of the Archon quest. Rival forces are arrayed against each other, setting the stage for a major conflict. 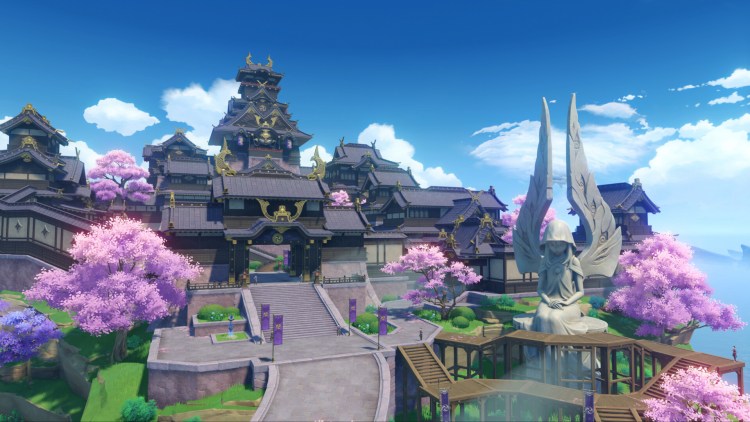 Mind you, the aforementioned quests aren’t the only ones that you’ll contend with. That’s because there are no less than three important sidequests in the Inazuma region. These actually lead to new 4-star weapons that you can craft: 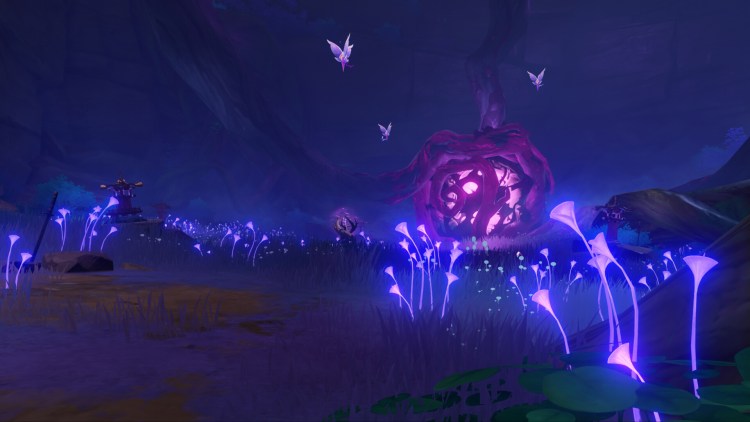 One of the new farmable bosses in Genshin Impact‘s version 2.0 Inazuma update is the Perpetual Mechanical Array (found on Narukami Island). This robot has many transformations. It can turn into a sword, a laser-shooting cross, and even a rocket that homes in on your location. It drops the Perpetual Heart which happens to be another one of Ayaka’s ascension materials.

Next, there’s the Pyro Hypostasis (found in Kannazuka). This crystalline entity has various abilities and you need to use elemental reactions to drop its shield. Your reward for beating it is the Smoldering Pearl, Yoimiya’s ascension material. 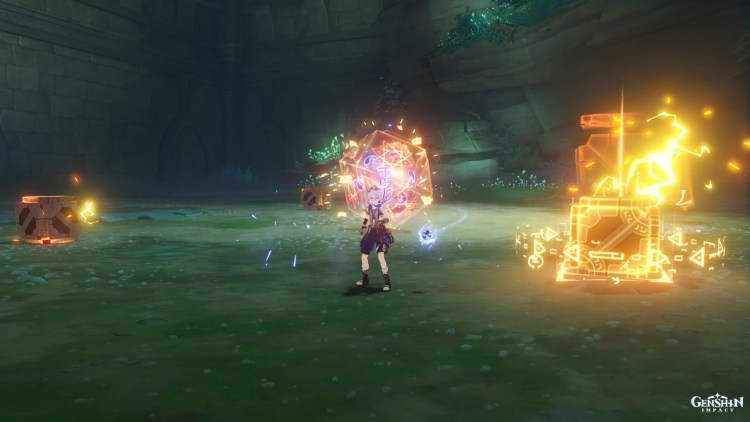 Then, there’s the returning Maguu Kenki (now located on Yashiori Island). This mechanical samurai still has the same attacks and you can farm it for Marionette Cores. Maybe you still need to level up Kazuha or prepare for Sayu’s arrival since she also uses this material.

Speaking of new creatures and entities, this version adds new types such as the Fatui Mirror Maidens, annoying Ruin Sentinels, various kinds of Nobushi samurai, and Electro-based versions of existing enemies (i.e., Thunderhelm Lawachurl and Electro Whopperflowers). Oh, and you might come across several dancing Tanuki, as well as special types of Electro Seelie that zip and dash all over the place. 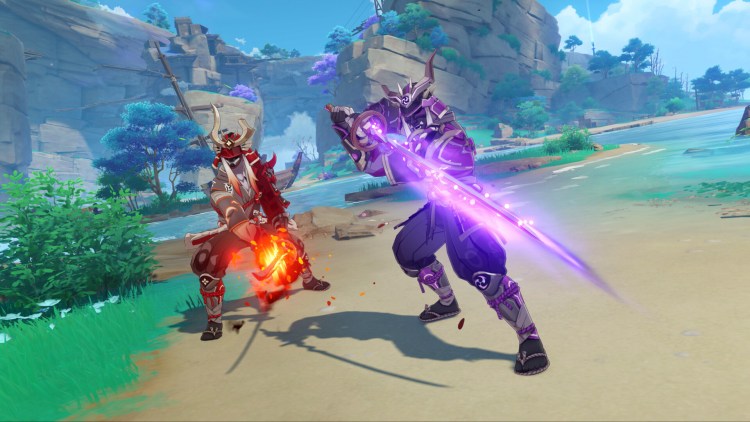 As for dungeon delving, Inazuma has six new domains. Some are accessible from the get-go, while others require you to solve nifty puzzles. Two of these domains, the Court of Flowing Sand and Violet Court, will provide you with weapon and talent leveling materials respectively. Meanwhile, the Momiji-Dyed Court nets you two new artifact sets: 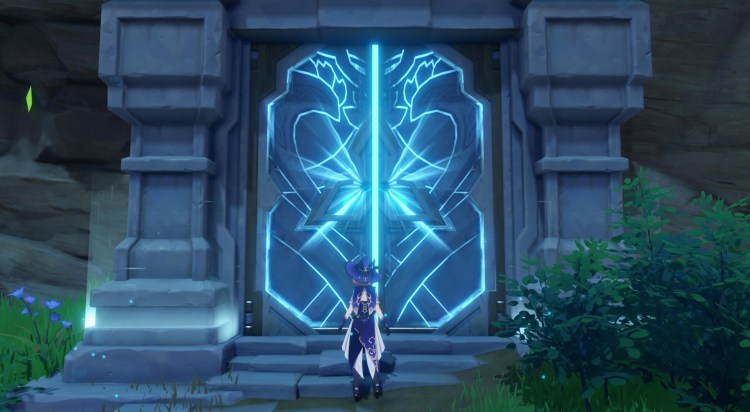 A key mechanic in Genshin Impact‘s version 2.0 Inazuma update is the use of Thunder Boughs/Electrograna. This buff allows you to pass through barriers, survive damage-over-time effects from the environment, and use grapple spots in mid-air. Because it’s tied to the sandbox progression, you’ll actually be able to obtain perks from the Sacred Sakura Tree to boost the effects of the Electrograna.

Likewise, the Traveler is now able to wield the power of Electro by interacting with a Statue of the Seven in Inazuma. Eventually, you’ll find Electroculi scattered everywhere. These floating crowns can be collected, and some are quite hard to find. They’ll let you level up Inazuma’s Statues of the Seven and, in turn, you’ll obtain primogems, Shrine of Depth keys, Electro Sigils (for the Sacred Sakura Tree), and constellation upgrades for the Electro Traveler.

Oh, and since you’re in a brand new region, you can progress via the reputation system and the bounties/requests. Exploration is very rewarding, and you’ll probably roam around looking for Luxurious Chests in Narukami Island, Kannazuka, and Yashiori Island. 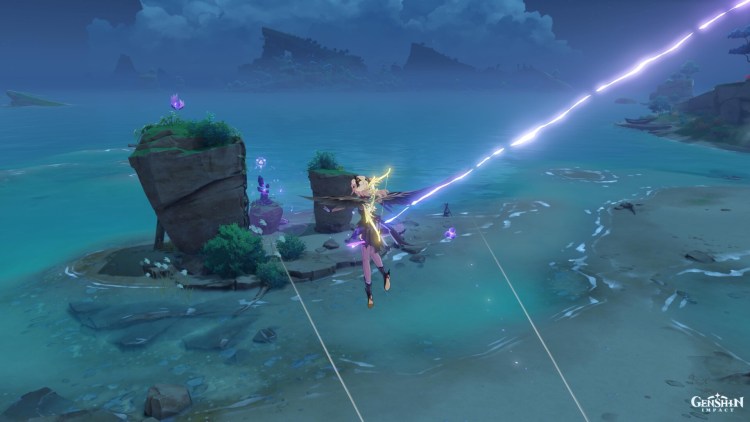 The event that’s currently running is called the Thunder Sojourn. You’ll be using the aforementioned Electrograna mechanics to grapple and zip through the air, or charge crystals that cause devastating explosions. The event shop lets you pick up numerous items, but the main reward is a free Beidou.

As for tweaks and improvements, one of the most important additions is the Epitomized Path mechanic. It allows you to select a 5-star weapon that you’d like to obtain via Epitomized Invocation wishes. If you don’t get the one you wanted, you’ll earn Fate Points to guarantee the item as a drop later. Mind you, the feature itself is helpful, but it can also tempt you to spend extra. The update also includes stuff such as gardening tools/plants for your Serenitea Pot abode, a means of obtaining Artifact Strongboxes, and more. 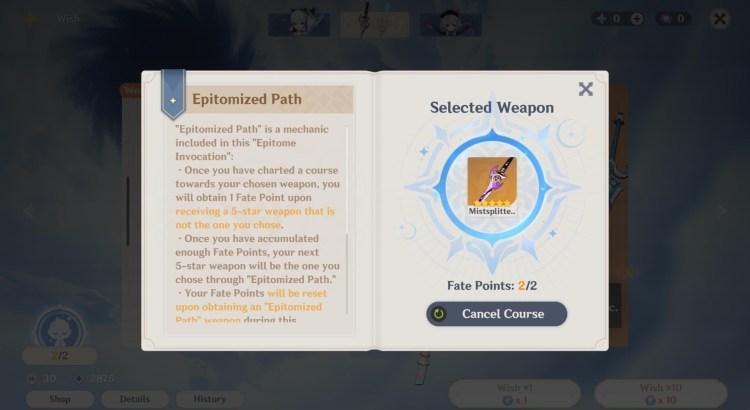 Inazuma is yours to explore to your heart’s content, and you’ll probably savor every moment. Right now, it’s expected that this version will last until the final week of August or the first week of September. Once we enter version 2.1, you can bet that Genshin Impact has more in store for players.

We know that the Raiden Shogun, Sangonomiya Kokomi, and Kujou Sara have been officially unveiled, so they might be available in wish banners in the upcoming version. We also have to consider characters such as Thoma, Yae Miko, and Gorou who’ve already shown up in quests. 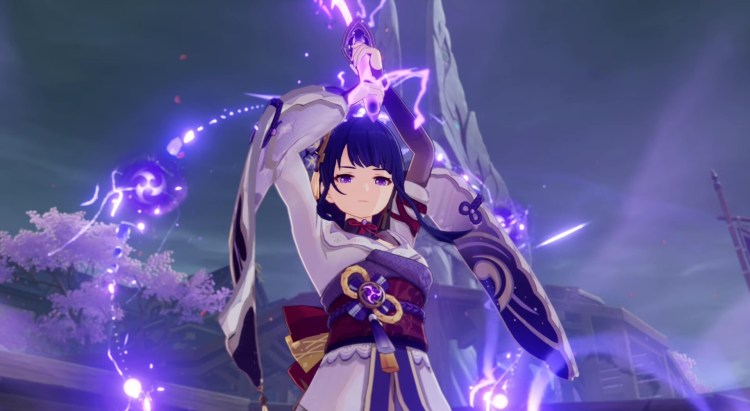 Lastly, we’ll get a surprising crossover: Aloy from Horizon Zero Dawn will be a free 5-star character. Those who are on PlayStation 4 and PlayStation 5 can acquire her via in-game mail once version 2.1 starts (other platforms need to wait until version 2.2).

Still, those who own a PS4 or PS5 (but don’t play Genshin Impact on these platforms) can link their miHoYo and PSN accounts, log on to their consoles to grab the in-game mail, and switch to their preferred platform to use Aloy there. It looks like I’ll be dusting off my old PS4 just so I could have earlier access to Aloy despite predominantly playing on PC.

"Everything I do is in the service of life, not death. That's why I'm here with you."#Aloy
Savior From Another World
Nora Huntress
Cryo
Nora Fortis

Can you play solos in Warzone 2? – Answered