Slowly but surely, you’ll familiarize yourself with Valheim‘s world and its mechanics. Eventually, you’ll get to farm bronze (via copper and tin), as well as fine wood and core wood. Here’s our guide to help you out.

From the basics of crafting with your Workbench to creating your starter gear set, Valheim‘s progression is gradual. Heck, given the nature of the game’s sandbox, you might even hold off on exploring the unknown since you’re having too much fun in the Meadows biome.

Eventually, though, you’ll end up fighting Eikthyr, the game’s first boss. With the stag defeated, you’ll get the hard antler material so you can craft the Antler Pickaxe (10x wood, 1x hard antler). With the Antler Pickaxe, you’ll be able to mine rocks to get stone (useful for crafting sturdier buildings). But, if you want to obtain bronze, you’ll need to find copper and tin first.

Both copper deposits and tin deposits are found in the Black Forest biome. For the former, head deep in the forested region and mouse over some mounds with a greenish tinge. You’ll notice that these are copper deposits.

Copper deposits are huge mounds, so you can expect lots of resources once you’re done mining the whole thing. Note 1: Lugging around tons of ore would be bad for your character’s back, so I suggest saving up on coins so you can purchase the Megingjord belt from Haldor. Likewise, you can open Valheim‘s world map, click on an icon, then double-click on a spot to place a marker. These markers would let you remember ore deposits in case you need to return later.

Note 2: In addition to the above, ores and their smelted counterparts, including copper and iron, cannot be brought along when using a Portal.

Note 3: Ore respawn rates can be downright perplexing. In fact, it might be better to farm lots of nodes in your current world, then load a new map seed so you can start mining in a brand new realm. Although you can bring your character’s inventory, including the Antler Pickaxe, you’ll need to explore and look for ore deposits once more. 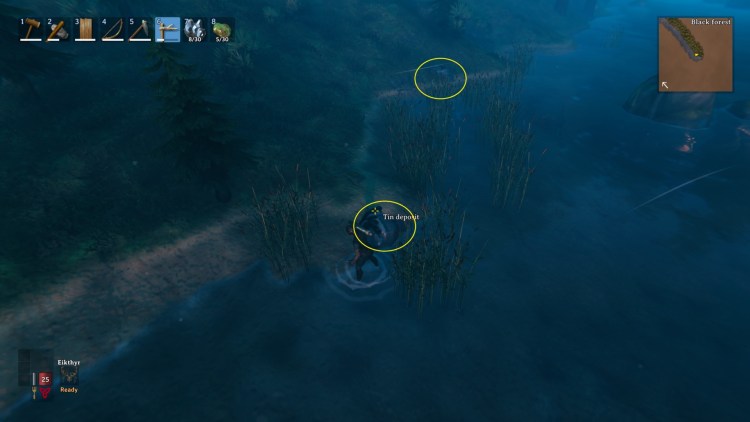 Smelting time and building a Forge for bronze

The copper and tin ores you’ve acquired would be useless unless you can turn them into materials that can be forged. To do this, you’ll need the following build near a Workbench: The weapons and armor pieces that you can create via the Forge can last you all the way to Valheim‘s endgame. For now, though, consider crafting a Bronze Axe.

This weapon is used to chop down more trees:

Note: If ever you encounter trolls, you can have them rampage around the area. They’ll end up destroying trees and you can pick up the resources without having to chop them down manually.

Anyway, these materials are used for some really decent weapons, furniture, structures, ships, and even the Cultivator which lets you plant seeds and grow crops. Gathering these new types of wood, as well as bronze from copper and tin, will become a common activity as you enter Valheim‘s mid-game progression. Valheim guide — Where to find Haldor and coins