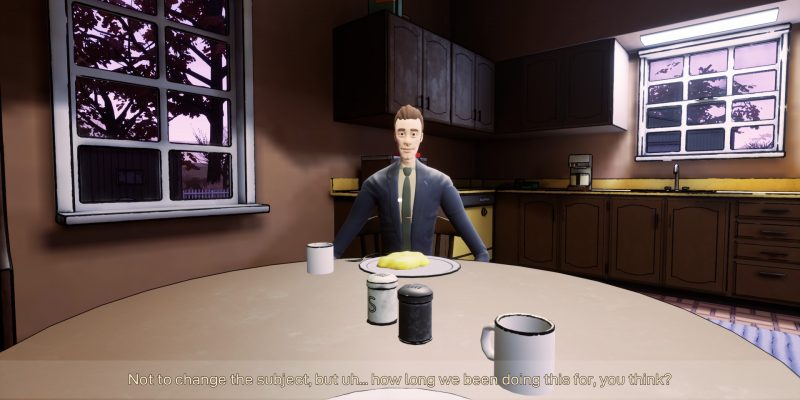 Most narrative games are “walking simulators.” It’s not uncommon to come across first-person games where you mostly sit and listen to engrossing conversations. Adios is only about 75 minutes long, and doesn’t have much to offer on traditional gameplay. But its dialogue is well written and interesting, and the high-concept plot structured around the game is fairly inspired. Even if it’s unlikely you’ll get your mind blown. Adios may have been better as a movie, but hey, it works regardless. As long as you aren’t trying to cook dinner.

Adios takes place through the eyes of a character known only as The Farmer. The story is set up around that old trope of the mob disposing of dead bodies by feeding the remains to pigs. Yeah, grody, isn’t it? The game opens up with a scene where you’re doing just that! The other major character, known only as The Hitman, has stopped by in a van loaded with suspicious meat. Together, the two get to throwing the “meat” into the pigpen, alongside idle discussion. But The Farmer doesn’t want to do it anymore. He wants out. And that can only mean one thing.

There lies the thread that’s central to Adios‘ rising action. The Hitman would like The Farmer to continue with their arrangement, as he’s still got plenty of years ahead of him. But The Farmer has decided it’s time to go. What follows is an uneventful, somber final day in the life of a man who no longer wishes to do wrong, as he explains everything about his existence to the man who will end it for him. The game is mostly punctuated by fully voiced dialogue brought to life with quality performances. But the two men also have their discussions during a few minigames and tasks. The heaviness of the game’s themes seems odd when contrasted with the cartoony visuals and silliness of the minigames, but there’s still plenty of emotional weight to be found here. 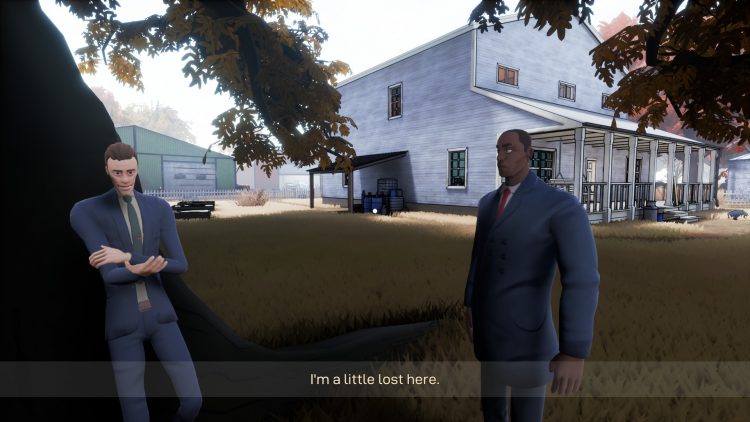 Adios‘ structure is straightforward. Sometimes a scene will occur automatically, while others will require approaching a marker somewhere on the farm. The farm itself is large-ish, containing a home, several buildings, and a long pathway to a lake. At a couple of points, players are tasked with selecting the order in which some of the scenes play out, but that makes no difference. You’re occasionally given dialogue options, but many of these can’t be selected. They’re things The Farmer honestly thinks. The thing is, he just can’t bring himself to say them. It’s a painful yet effective way to honestly convey his thoughts and feelings.

The different scenes in Adios often focus on specific tasks and minigames. At one point, The Farmer and The Hitman play a game of horseshoes. Other times, you see them milking goats or shoveling manure. At one point they even shoot skeet. None of the minigames are particularly noteworthy, but they help demonstrate the mundanity of The Farmer’s existence. They hammer home why he might not be so keen to keep living this way. You even get to go fishing. After catching several fish in a row, the game lampshades how redundant it all is.

The oddest thing that Adios does comes in its last moments. The final task involves preparing dinner. You’re just supposed to press a timer in the kitchen, which will start the final section. Of course, that isn’t at all obvious, and I ended up attempting to actually cook a meal, as there are a pan and pot on the stove, as well as meat, carrots, potatoes, peas, and an onion to be found. I cooked the steak easily enough, only to learn that none of the other ingredients could be manipulated, which led to me throwing food around in the kitchen for several minutes. It was an unnecessarily goofy way to experience the denouement of Adios. 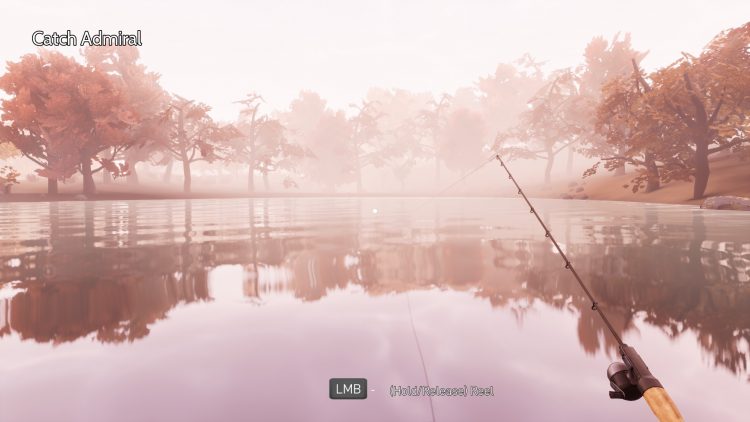 Visually, Adios gets the job done. The game has a nearly cel shaded look to it, almost comic book-esque in terms of presentation. The farm itself is nicely detailed, with the outdoor areas faring better than the indoor ones. The best-looking spot is undoubtedly the lake and the connecting road leading back to the farm. For an indie game, the reflections on the water are fairly convincing and serene, which adds a lot to the peaceful quality of the fishing sequence. Seeing the fall colors on the trees overhead makes for a relaxing stroll as you steer a man towards his fate.

Character models are understandably the roughest aspect. The animals appear somewhat strange, with the horse looking particularly unnatural. Thankfully, the goats and pigs are better. But humans are the hardest. Adios only has two human character models — The Hitman and his associate Sol, who we only see during a single scene where The Farmer relays interesting information on American chestnut trees. But the character models aren’t all that expressive, coming across as doll-like and a bit surreal. When that’s presented alongside the believable conversations and heaviness of the game’s themes, it can break the immersion a bit, as can the sparklingly sterile interior of the Farmer’s house. The guy’s a pig farmer, but his house looks like the inside of a Pier One.

Regardless, Adios is successful at using the medium to tell its story, which I found to be emotionally resonant and effectively arranged. At just 75 minutes, it doesn’t have much to bring anyone back, but it’s long enough to convey everything it needs to. It’ll take a bit longer to thoroughly explore the farm and get all of the achievements, if that’s of any interest. Hoping against hope that we can make up for our mistakes and the consequences for making them in the first place are necessary components of the human condition. Much like this game’s brisk runtime, sometimes it’s better to know when to go out. Some slightly different choices in the art direction would have been in the game’s favor and the awkwardness of the last section dulls the overall impact, but it’s worth checking out all the same. 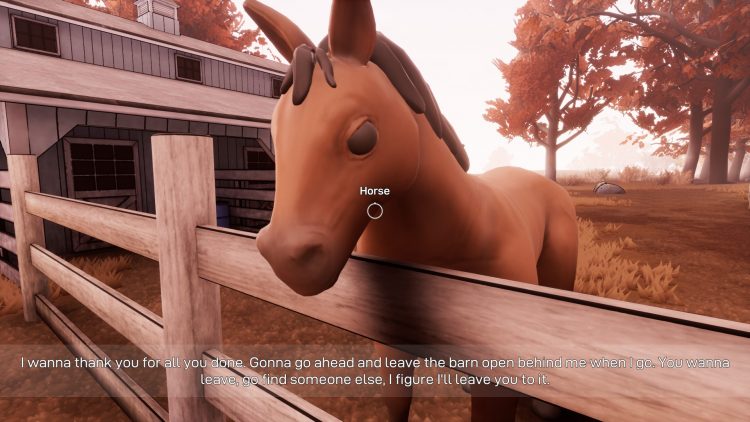 Adios is brief and mostly concerned with dialogue, but it's a thought-provoking piece of interactive fiction, even if the visual style clashes with the narrative.