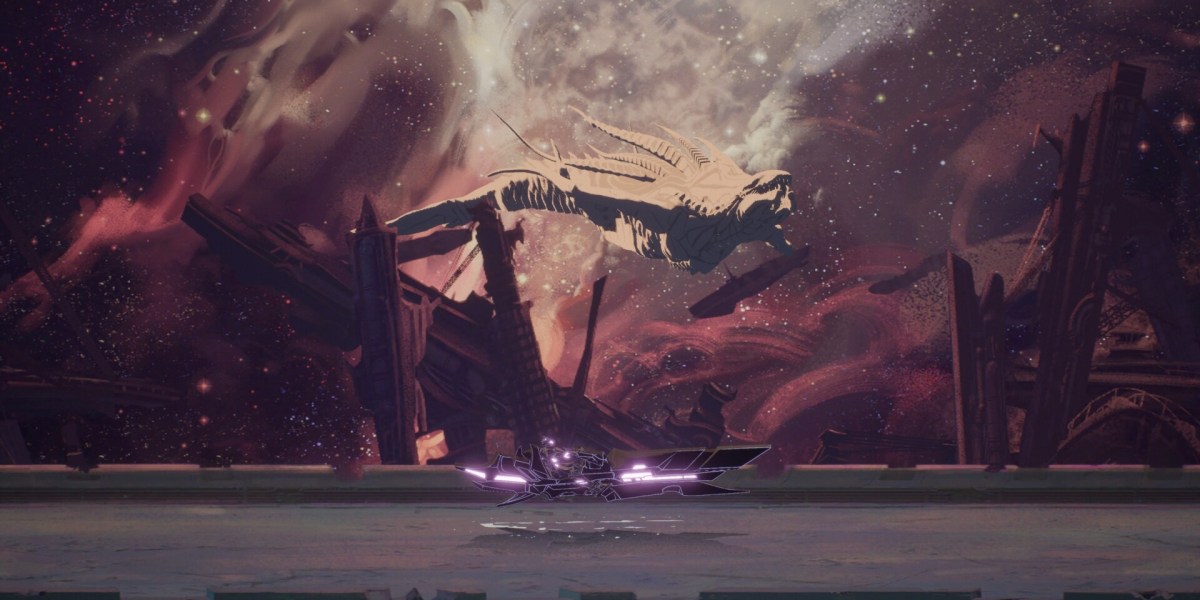 I absolutely have to mention Aeon Must Die‘s circumstances before diving into it as a game. To put it simply, Limestone Games’ head has been accused by most of the game’s dev team of multiple abuses, which resulted in most of the team leaving the studio months ago. If you buy this game, know that the people who actually made it aren’t likely to benefit from it, especially since they refer to the game as having been “stolen.” Still, it’s a creative title with some great experimental concepts, although not all of those work out or make for a fully compelling experience, especially as the difficulty level rises.

Aeon Must Die is basically a single-player fighting game. Unlike nearly every other fighting game in existence, the story is actually the most interesting thing here. You play as a combination of a former emperor named Aeon and a member of the “Starspawn” race. Aeon is a malicious, vengeful being that was forced to possess the body of a member of the Starspawn race, after being betrayed by one of his closest confidantes. The plot concerns Aeon and the Starspawn sharing a body while attempting to either make peace with, or eliminate, Aeon’s former generals, depose the traitor Ivory, and return Aeon’s empire.

There are complications, however. Aeon Must Die grants players a maximum of nine lives called “purpose.” If you lose all of these, the Starspawn effectively gives up and allows Aeon to take full control. Doing so means that failure has no further penalty, but the story becomes locked on a more aggressive course and you can’t do any side quests. It’s a stunningly original idea that I love for the narrative repercussions, but I kind of hate what it means for the gameplay. For me, at least, it makes playing the game far less compelling, even though I appreciate what it’s going for. 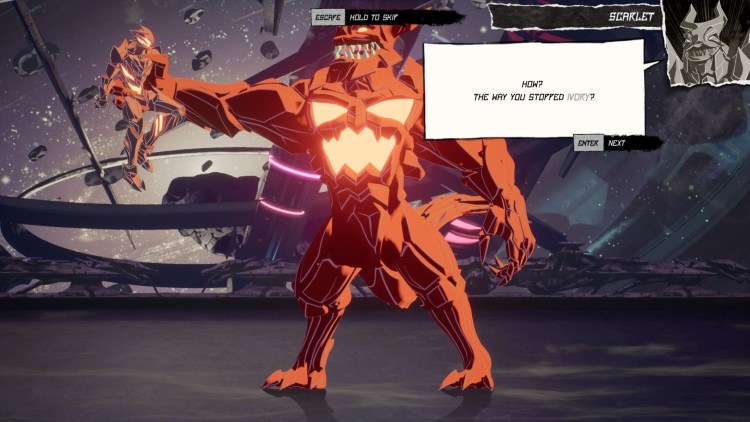 Even death may die

Aeon Must Die is broken up into story chapters, as well as optional ones. Each you complete will earn you a respect point, which you can use to purchase new moves as long as you’ve still got purpose. If you clear a story chapter with a ranking of SS or higher, you’ll get a second respect point. If you run out of purpose and Aeon takes over, all moves are unlocked. Whenever you fall in battle, the enemy that beat you will take your purpose and run. You can challenge them to a revenge match to get it back, which is yet another unique, clever choice that I happened to not like at all from a gameplay perspective.

Pretty much every chapter is broken up into fights against a horde of enemies. Sometimes you’ll fight one strong enemy or a boss, though. In another twist, you don’t have a life bar. Instead, you have two main attack forms — basic hits and fire hits. Basic hits raise your temperature and fire hits lower it, as using them expends that energy. If you go too far in one direction, you’ll either enter overheat or you’ll drain, which sees you enter a burning or chilled state, respectively. Both take some time to break free from.

This is where the rub is: if you get hit while overheated or drained, you lose purpose. So, no, there’s no life bar. Combat is therefore a constant tightwire act as you attempt to keep yourself from going to either extreme. On top of those hit types, you can grab foes, dodge, and parry. Dodging drains you and parrying heats you up, so these two must be taken into consideration. Aeon Must Die is pretty fun for the first several hours. But, this is essentially a fighting game with one character, and it gets old before long. 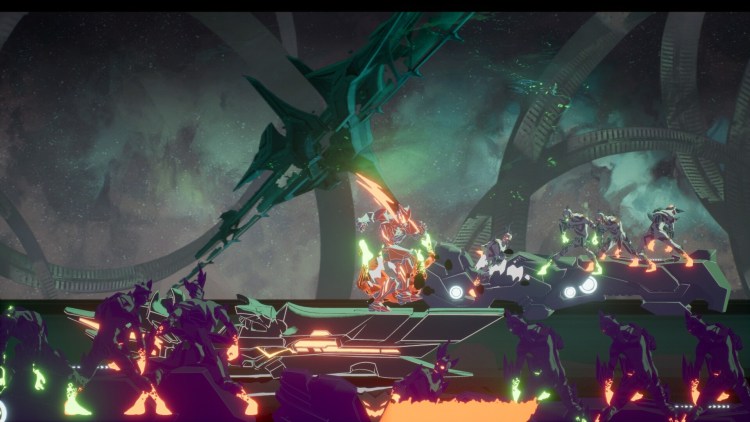 The enemies in Aeon Must Die are designed to compensate for this. Enemies come in red, blue, and green varieties. Yes, one heats you, one drains you, and one can mix and match. Honestly, I find it all somewhat confusing. The game has so many mechanics and so much specific junk to keep in mind that I always felt overwhelmed by everything. On top of all this, beating enemies increases the difficulty of the game, so the more side stuff you do, the harder everything gets. I was fine at first, but it wasn’t long before the game became a giant pain.

The thing about the game is that, when it gets hard, it’s more cheap than anything else. You’ll eventually meet enemies that you can’t flinch, as well as enemies that will always parry you or teleport nearly every time you hit them. Some of these can push you to the death zone in just a few hits. You technically fight one enemy at a time, but the ones waiting in the wings can help them out. You’ll often start fights with barriers on either side too.

What this boils down to is that you’ll sometimes end up fighting an enemy that isn’t safe to hit, in an area with no room to maneuver, while their friends are throwing projectiles at you and placing traps on the ground. Sometimes the levels are dark and you can’t see much of anything. If this sounds fun to you, then great. It was awful for me. I ended up losing fights just because there was so much going on, and I was against such ridiculous odds, that I couldn’t help but get overheated or drained. Many enemies will also hit you right after you enter one of those states, which will end you immediately. 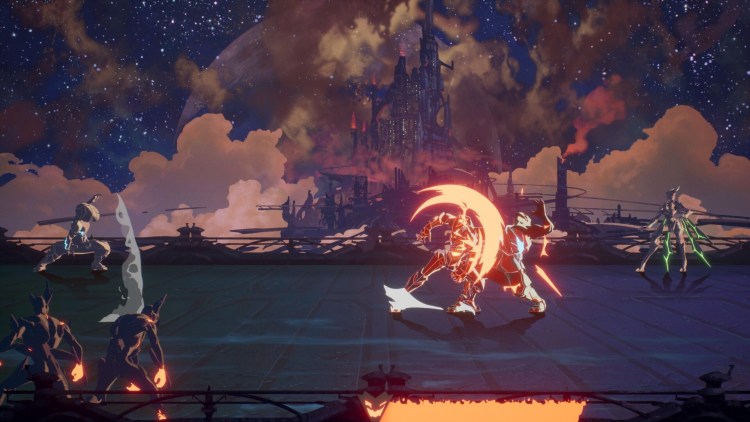 It’s the only thing I’ve got left to do

Matters can worsen when you go to take revenge and get your purpose back. I got caught in cycles that were just like the scenario described above, which only led to me losing again and the enemy getting even stronger, as they get new attributes when they beat you. It’s easy to spiral out of control and lose all your purpose to these. You can rewind back to a specific checkpoint after losing all your purpose, but it can take you quite far back, requiring you to do a significant amount of the game again. It completely killed my enthusiasm.

Aeon Must Die has a lot of great ideas that simply didn’t at all work for me. What started as a creative, unique experience eventually shifted into something hateful and horribly tedious. While I appreciate a lot of what the game attempts, I had a fairly bad time with it. Playing through the game as just Aeon, with all his moves and infinite lives, wasn’t any better either. 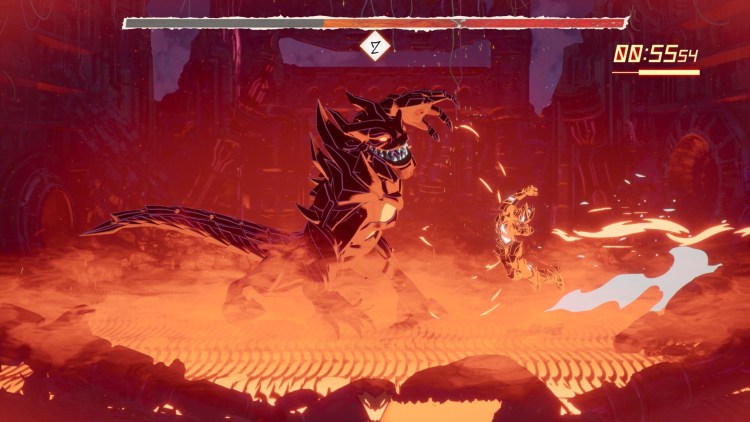 Aeon Must Die has extremely creative ideas that simply don't merge well as a game, resulting in a frustrating experience that gets old rather quickly.