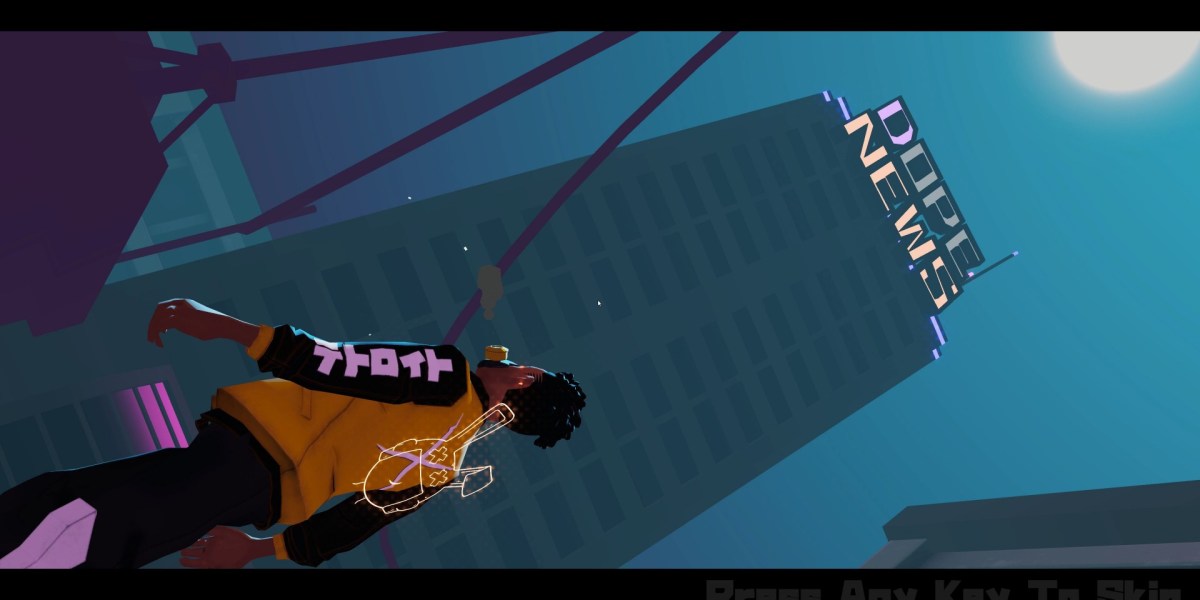 During my days as a young pup in this industry, I spent immense amounts of time reviewing iOS games. Don’t judge; a guy’s gotta make a buck! In my nearly five years covering the platform, I’d become intimately familiar with the “endless runner” genre in every size, shape, year, make, or model imaginable. Since shifting gears to cover console and PC, I’ve dodged them like the plague. Well, at least that was the case until I was introduced to Aerial_Knight’s Never Yield. Does it manage to breathe new life into the flagging genre, or is it just breathtakingly bad?

Calling Aerial_Knight’s Never Yield an endless runner is the biggest disservice I could offer the title. It’s far more than just dashing from place to place. I mean, there’s dashing, jumping, sliding, and even dodging. Still not convinced? What if I told you, it possesses an amazing cel-shaded aesthetic that’s just as fluid and frenetic as it is stylish. Trust me. If it can stave off my ‘Nam flashbacks of its numerous failed predecessors, that means it has to be good.

Like I alluded to earlier, this is very much an action game at its core, with the story revolving around a random guy named Wally. Apparently, the Wal-meister is on the run from the powers that be for some unknown crime. To successfully beat a hasty retreat, he has to use all of his skills to their fullest extent. Now if only he had an idea of what was awaiting him later on in the campaign.

The overarching narrative for Aerial_Knight’s Never Yield comes off rather convoluted and confusing. If I’m being entirely candid, it was genuinely difficult to follow what was going on across the game’s 13 stages. Some of the questions I found myself kicking around in my head included: What the hell is going on here? Does the story feature two of the same character, appearing at different points in a single timeline? Are these parallel Wallys trying to capture or aid each other? Who wins the final battle, and why isn’t it playable? 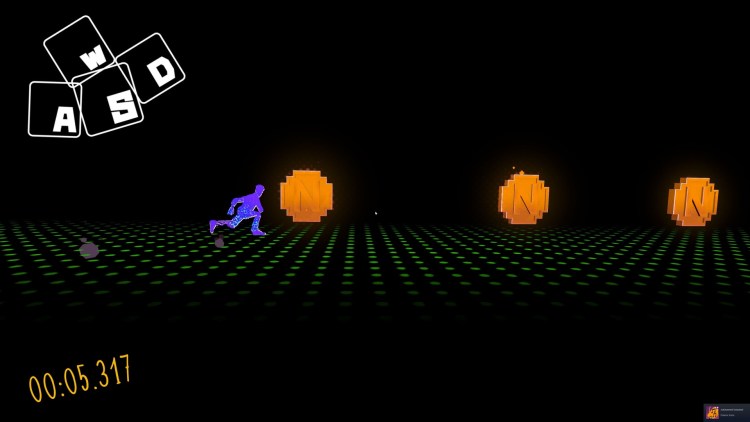 Even after rewatching all of the cutscenes after the fact, I still have very little clue as to what the hell is going on. Fortunately, the storyline itself had very little bearing on the actual gameplay. Instead, we’re all treated to action and animations that are extremely frantic, yet shockingly smooth. While you’re, quite literally in most cases, running for your life, there are momentary bullet-time/quick-time sequences that occur every time a new movement needs to be executed.

Go with the flow

The blend of the momentary slowdown and the pulsating backing tracks lulled me into a Zen-like state, something that allows you to turn off your brain and give in to the moment. This is a very similar sensation to playing through any of the incarnations of the Rez series. Yes, I know that sounds slightly ridiculous. However, when you factor in how the soundtrack ties so closely into the gameplay, every input begins to feel melodic. It’s almost like you’re an active participant in the score.

When playing at the highest difficulty, the aforementioned momentary slowdown doesn’t happen anymore. Ironically, the removal of this feature almost ruined the experience. Having to stay on edge was a completely foreign concept up to that point. It was downright off-putting after growing accustomed to the previous pace of play. 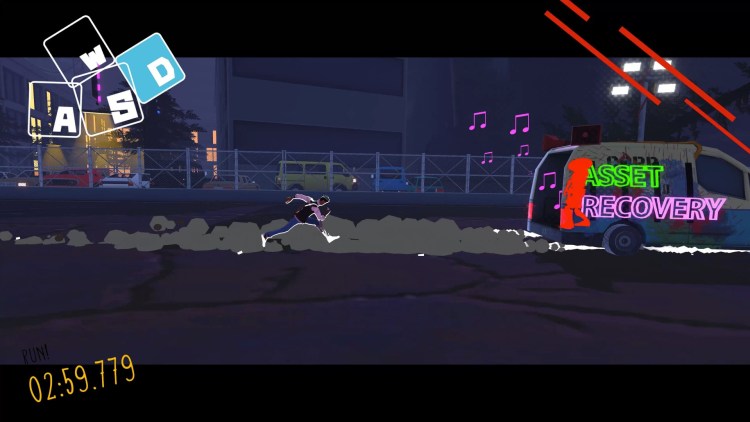 I’m a huge fan of Aerial_Knight’s Never Yield’s minimalistic art style. In this case, the minimalism extends to both the color palette and overall visual detail. Interestingly enough, between the overall gameplay pacing and the cel-shaded aesthetic, it almost whitewashes much of the visual detail away. Yet, when I went back and rewatched my gameplay videos, I was genuinely caught off guard by how detailed the character models and environments were, with the benefit of the pause button.

Another example of this minimalism is the extremely limited number of ways to interact with each obstacle. At most, two different ways exist to clear challenges, and a vast majority of them can only be conquered a single way. These obstacles take the form of items that need to be jumped over, through, or under, and are repeated continuously. Mercifully, traversal is lightning quick. Otherwise, the asset reuse would prove far more prominent and obvious. 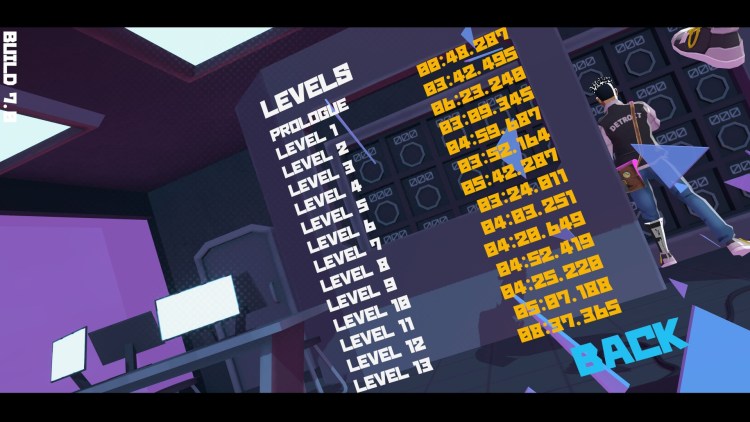 All of Wally’s movements are extremely timing-centric. At lower difficulties, and earlier on in the campaign, the proper timing windows are fairly lenient. However, as the stages progress, it feels like those windows begins to tighten up a bit. After jumping to the highest difficulty, these windows become even more claustrophobic and remove advance warning of upcoming obstacles to boot. Your experience will vary greatly across the three difficulty levels.

These differing experiences help to further augment Aerial_Knight’s Never Yield’s replayability. Part of the reason variety is so critical is because the core campaign can be conquered in under ninety minutes. Additionally, you can collect and equip fourteen alternate costumes over the course of the narrative. That said, I managed to collect all but three outfits on my first playthrough, so it’s hard to say how much this will extend your experience. 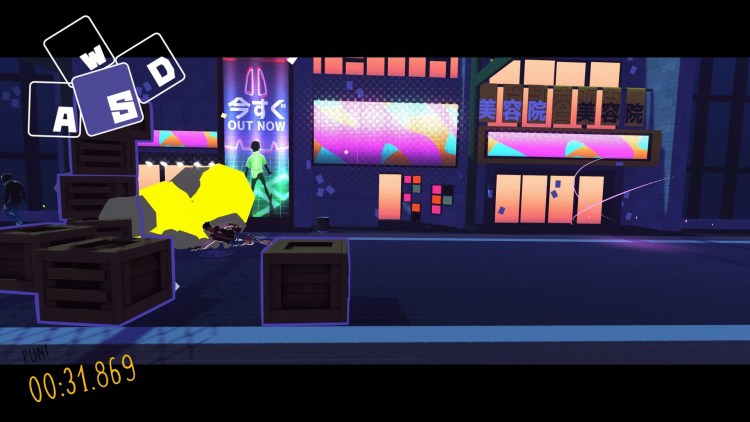 If I had one major beef with the game, it would have to be a lack of any form of multiplayer. To be clear, I’m not suggesting having multiple people competing against each other in real time. Instead, I was thinking about the fundamental mechanics of many other modern games, such as online leaderboards. It’s no fun to solely compete against yourself, so this would introduce a global audience to try and top. Hell, it wouldn’t take much to build this functionality out further, allowing for those on your Steam friend list to receive high score challenges. Obviously, this addition would hardly be groundbreaking, but it could inject immense amounts of extra replayability, with minimal modifications to the core experience.

I thoroughly enjoyed my time with Aerial_Knight’s Never Yield. It’s a visually arresting, fast-paced experience that blends chaotic gameplay with a stellar score. Its runtime and replayability seem a bit sparse in my book, but that’s something that could hopefully be fleshed out through future updates. Here’s to hoping there are plenty more races in store for all of us.

This delightful sprint is both beautiful to watch and engrossing to play. Aerial_Knight's Never Yield is a fantastic hour and a half long sprint, that features an outstanding score and plenty of narrative surprises interwoven throughout. Now, if only we had a flow-chart to follow the actual storyline...

Phasmophobia developer is planning on bringing Yōkai to the game soon