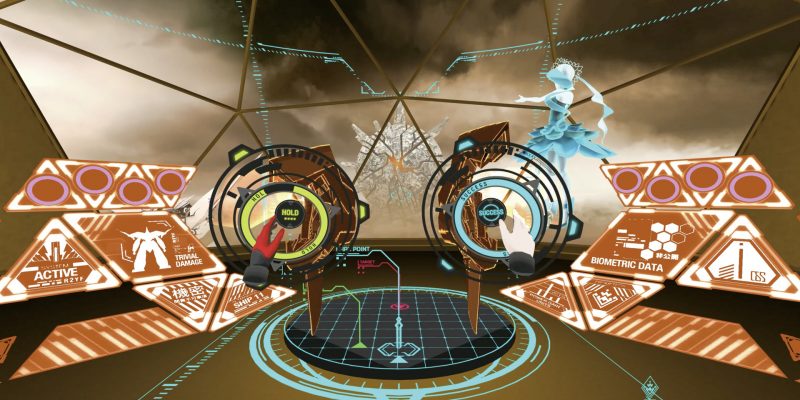 Virtual reality gaming has proven to be a shockingly versatile medium. What was once thought of as the haven for shooters and on-rails action games has evolved into a platform that can deliver experiences that were never even imagined 20 years ago. Thanks to this shift in perception, we are now seeing games like Altdeus: Beyond Chronos taking center stage. But is it possible for a title to exist in the middle ground between gaming and animated film or novel?

What would a futuristic Earth be without monolithic beasts, hell-bent on extinguishing the flame of humanity? In this case, the beings vying for the planet are hulking organic creatures named Meteroa. You’re a member of Prometheus, an elite, mech-infused defense force, filling the role of a manufactured human by the name of Chloe. Fortunately for you, at this point in Earth’s history biomechanics have evolved to the point that artificial humanity is almost considered to be proper homo sapiens.

Getting to know the team

The rest of the Prometheus squad is a ragtag bunch of odd individuals, all of which slot into pretty stereotypical roles. Julie, a non-combatant member of the team, specializes in the scientific exploration of the Meteroa. Just know that she has scientific tendencies that follow more along the lines of Otto Octavius than Louis Pasteur. On the opposite end of the sanity spectrum is Yamato, who is a young, ambitious pilot, that could also use a heavy dose of maturity. Lastly, Aoba is the tactical head of the team that leads from behind a desk, rather than the deck of a mech.

Several other additional characters including AIs, military leaders, and the like, all make appearances throughout the campaign, but none are more crucial than the character of Coco Kokonoe. Coco is a young girl who is suffering from a debilitating condition that causes all of her human functions to slowly break down. Early on in her deployment, Chloe is in charge of caring for Coco, which acts to bond these two characters together. I don’t want to give too much of the story away. However, I will note that though the inclusion of Coco initially feels out of place, over time, she proves to be even more crucial than the likes of Chloe. 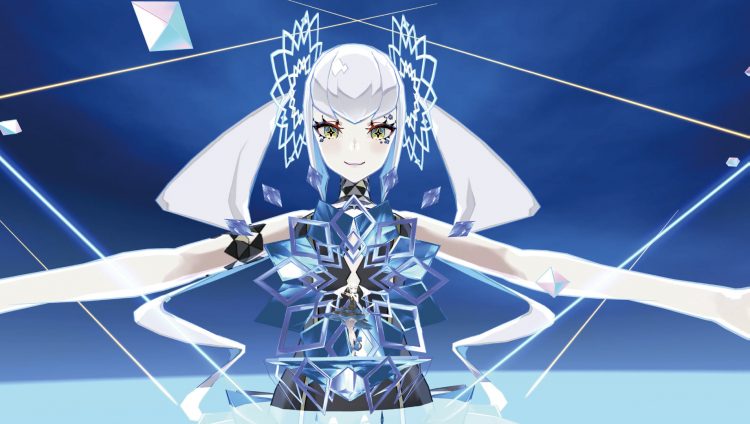 To understand Altdeus: Beyond Chronos is to be confused. Yes, I realize that sentence makes virtually no sense out of context, but hear me out. Altdeus is a narrative-driven experience that evolves with every decision made. There are countless moments where you hear a piece of dialog or internal self-narration and think to yourself, “what in the bloody hell does that mean?” Most of the time I simply blew off these weird interactions as potential localization quirks and proceeded onwards with the story.

Only upon replaying the same scenes again, after completing my first go-round with the campaign, do these seemingly nonsensical ramblings become clear. Many times, these comments will be a moment of self-reflection or character winking down the proverbial lens at the viewer. I don’t think it’s much of a spoiler to say that replaying through scenes plays a pivotal role in the overall exposition. There’s even a story mechanism used to explain these multiple replays, but I don’t want to spoil that aspect of the experience. Just know that if you’re confused, use that as your trigger to pay closer attention. It will pay off in the long run. 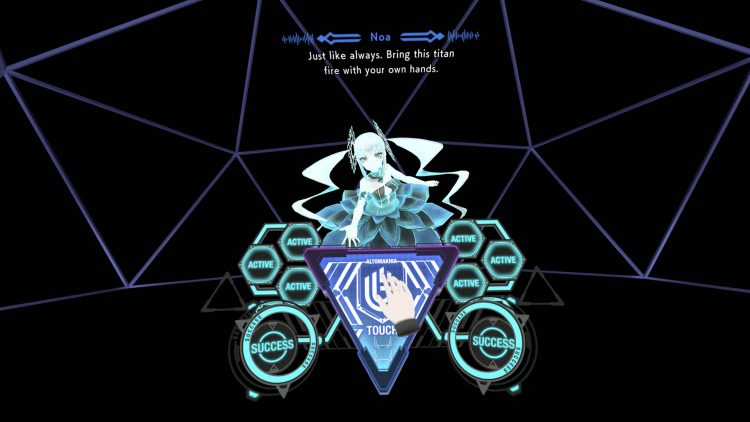 Each time around the horn there will be new scenes that are added to the storyline. This new content is driven by dialog choice options, as well as successes or failures in the rare battle or puzzle. Along the same lines, new dialog trees are provided upon replay. These additional options can further build out the opportunities to further explore this alternate interpretation of Earth’s future. You should take the opportunity to dig into each character’s back-story because their motivations will certainly keep you guessing.

If you’ve been reading between the lines of this review, you may have picked up on the fact that I’ve never used the term “game” or “player” when describing Altdeus: Beyond Chronos. This was very intentionally done because I don’t think this should be considered a game. Essentially, this is a lightly interactive VR experience that allows very limited opportunities to interface with the action. Depending upon the playthrough, you may participate in a couple of different battles, but that isn’t anywhere near as exciting as it sounds.

Battle sequences amount to a handful of glorified quick time sequences, where you have to digitally press buttons. Otherwise, you’re just observing the action from the deck of your mech. Seriously. That’s pretty much about it, aside from the exposition dumps that also take place in between the different steps in the battle. Supposedly you’re piloting a mech, yet you have literally no control of the machine whatsoever. So long story made painfully short, you get to participate in fights the same way that the Secretary of Agriculture is a member of the United States cabinet. I mean, sure, they are in “the room where it happens.” But are they crucial to the process? The short answer is: probably not. 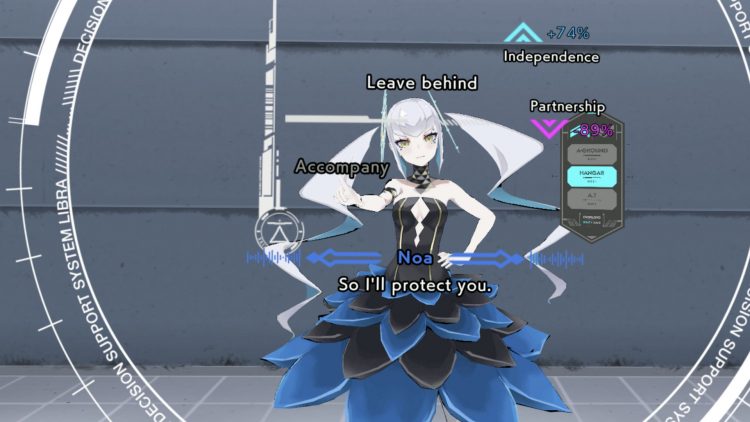 A vast majority of the experience of Altdeus: Beyond Chronos is spent in conversation. Now, don’t get me wrong. Calling it “conversation” is fairly generous, considering that a majority of the story happens around Chloe as opposed to it happening to her. There are usually a couple of opportunities in each scene to select from a handful of potential dialog options, to progress the story. The problem is, the possibilities that you have to choose from don’t definitively spell what binary decision is being made.

There were numerous times where I looked at the available two- to three-word dialog descriptions, attempting to discern which was the actual “right” answer, only to pick completely incorrectly by total accident. While this isn’t a huge deal, considering you get the opportunity to experience each sequence numerous times, it would’ve been nice to get a bit more detail as to what I was selecting. Instead, I was left feeling like control of an already limited experience is being ripped away even further. 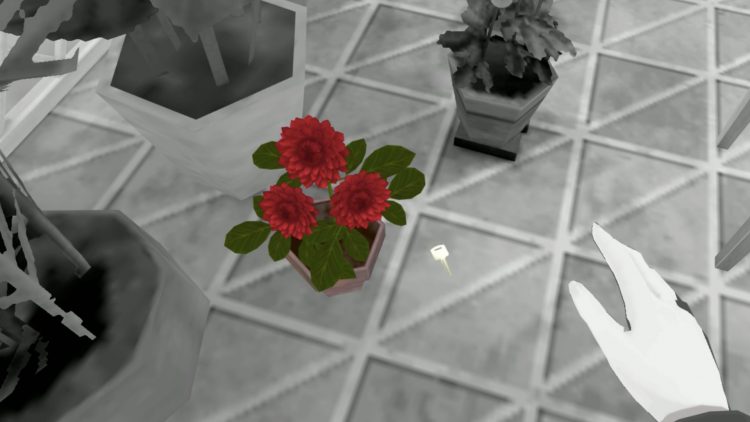 One of my biggest beefs overall was lack of immersion, despite everything existing in a VR space. What had the potential to be genuinely awe-inspiring was instead, rather generic. Across the entire campaign, there are only a handful of different settings, which are reused for scene after scene of exposition dumps. Worse yet, most settings were completely devoid of interactive elements, which defeats the purpose of the medium, entirely. It was honestly more akin to watching a film on a stationary IMAX screen than anything of the virtual reality variety, which ultimately proved to be rather disappointing.

Normally, the dialog would progress by pressing the trigger on either of the motion controllers. This would then advance the conversation by a sentence or two, most of which you were barely involved. However, if you pressed and held the trigger, this would then unlock the free-rolling dialog, where you can just sit back and watch, while simultaneously further driving home the fact that this was more an interactive film/novel than an actual game. After all, nothing says “all-consuming VR action” like watching other people talk, am I right?

The ceiling for Altdeus: Beyond Chronos was sky-high. However, what could have been an interactive tour de force is instead, a rather repetitive chore of an experience, that completely loses sight of the medium’s strong suits. If you’re a narrative nut, this will certainly scratch the itch, but if you’re going in expecting massive mech battles, plan on being very disappointed. This is an experience where you will get out what you put in, and that isn’t necessarily a good thing.

As long as you go into the experience knowing what to expect, Altdeus: Beyond Chronos has the potential to be genuinely entertaining. However, on the scale of interactivity, this really doesn't qualify a game. The inability to take full advantage of the VR platform ultimately seals it's fate as nothing more than an acquired taste that will prove to be off-putting to many.