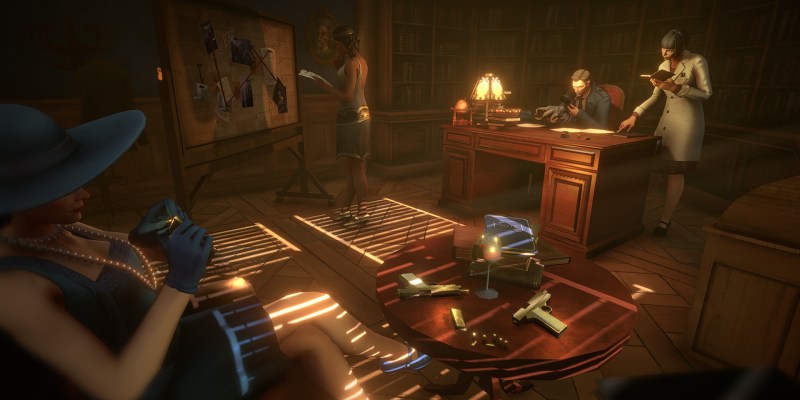 Arkham Horror: Mother’s Embrace is a video game adaptation of Arkham Horror, a board game that was released in 1987. Given the name itself, it also uses themes that are central to H.P. Lovecraft’s Cthulhu Mythos. Granted, I wasn’t able to play the board game at all (I don’t think I’ve ever seen it in stores here in the Philippines). However, I’m very familiar with Lovecraft’s works and adaptations in various media.

Since Arkham Horror: Mother’s Embrace also has turn-based tactics for its combat system, it was right up my alley. Unfortunately, certain flaws (not just monsters) manifested themselves as I progressed further.

Arkham Horror: Mother’s Embrace starts out by telling you of the occult and otherworldly powers that are watching our world. A strange meteor was observed in the sky, and a certain Professor Tillinghast seems to have some ideas as to its purpose.

The first scenario in the campaign (which also serves as the tutorial) leads your investigator to a meeting with Professor Tillinghast. She chides you and makes comments as you explore her mansion. Eventually, you realize that she’s been dead for some time. This sets the stage for a romp that has you uncover a sinister plot. From there, you’ll visit Miskatonic University to learn about her research and, much later, you’ll explore Arkham Asylum along with the streets and swamps of Louisiana.

The locations are a treat for fans of Lovecraft’s works, as there are plenty of nods and references. Moreover, the story is fairly easy to follow and, in typical Lovecraftian fashion, you can count on a number of dark rituals and ominous warnings that provide a foreboding tone and atmosphere. 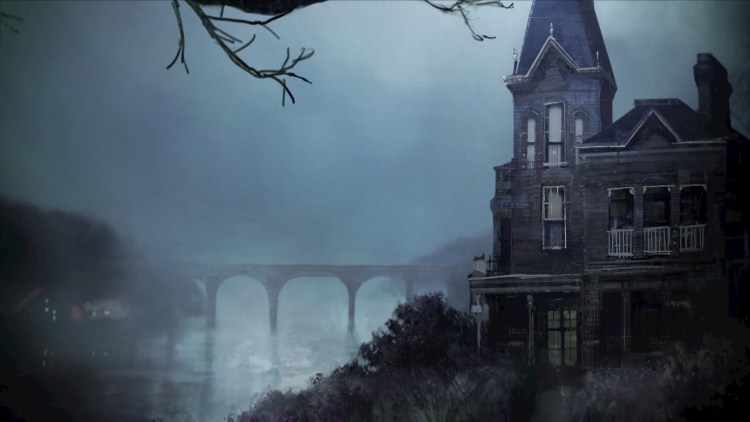 Send in the investigators

Arkham Horror: Mother’s Embrace has seven investigators to choose from. Each one has his or her own perks, combat viability, investigation capabilities, and traumas. For instance, “The Professor” Harvey Walters has a perk called “Mentoring” which increases the range for all magic-based and projectile-based attacks done by the group. He also specializes in “search-type” investigations. Although he’s fairly weak when it comes to melee attacks and initiative (when he’s able to take his turn during combat), he tends to have average capabilities for ranged and magic attacks.

Meanwhile, “The Gravedigger” William Yorick has a perk called “Pact of the Act,” allowing him to resist negative status effects. Compared to Walters, he’s good with “physical” actions when conducting an investigation. Yorick also has high initiative and is strong in melee, but he’s average when it comes to magical and ranged attacks.

With these selections in mind, you might imagine a campaign that proves to be fruitful, engaging, and full of many twists and turns. Sadly, Arkham Horror: Mother’s Embrace tends to have a run-of-the-mill progression. 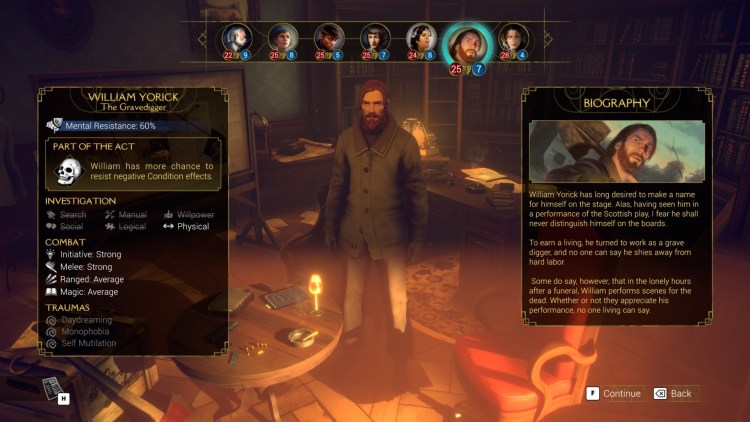 While you search for clues in various locations, the investigators will be presented with different choices. Examples of these actions include picking a lock, lifting a box, examining a body, shaking an object, opening a container by force, or patting down a character.

The options are governed by a certain specialization (i.e., the aforementioned “search” and “physical” actions, as well as others like “social” and “manual” tasks). Unfortunately, the information remains opaque and unclear. On one hand, you could pick something that seems like a “willpower-based” action (with an investigator that specializes in the same thing). But, it might also end up being the wrong one.

Arkham Horror: Mother’s Embrace doesn’t explicitly tell you of any success or failure rates when presenting you with these selections. Oftentimes, it’s as though you’re bumbling around in the dark. Worse, incorrect choices, failures, and taking additional turns in combat increase the Mythos Clock’s ticks. 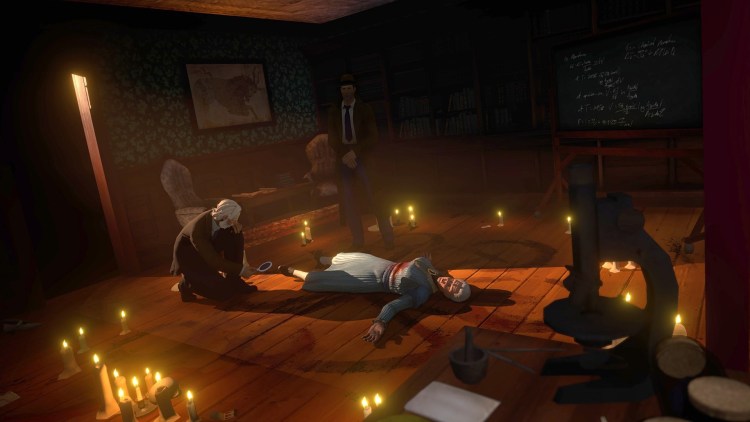 The sanity system and traumas

The Mythos Clock is a feature on the upper-left corner of the HUD. Once it’s full, your party can be afflicted by certain status effects, or a “sanity check” occurs. Should characters fail that sanity check, they lose a point. If a character’s sanity is fully depleted, one of their traumas will become active.

A trauma is a status effect that will persist throughout multiple investigations. The only way to cure this is to bench a character for a particular chapter and use them again later on. Oddly enough, the investigator screen doesn’t even mention what each trauma does. That’s another example of the game’s lack of concise, user-friendly information.

On paper, the sanity mechanic sounds decent. In practice, however, the poor explanation of investigation choices, the “right” versus “wrong” options, and the lack of success or failure rates all feel like hindrances. It’s as though my characters were just incurring one debuff after the other, so I had to let them stay on the sidelines while bringing others with me. 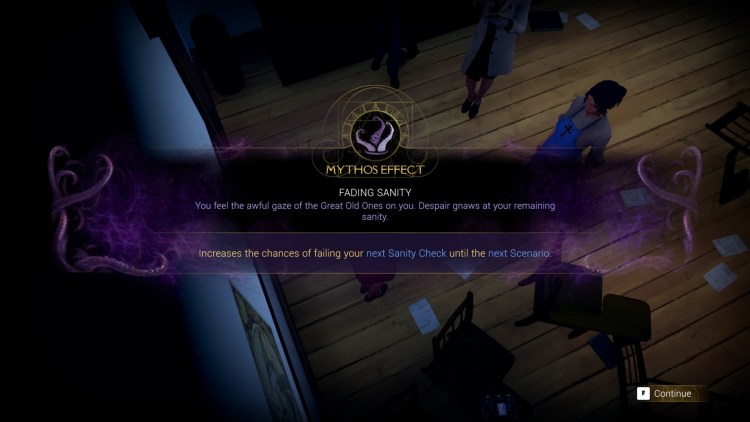 The aforementioned issues are compounded by the combat system in Arkham Horror: Mother’s Embrace. While long-time turn-based tactics/strategy gamers will be familiar with these concepts, this title doesn’t really offer anything new or fresh. You have your usual attacks, action point requirements, overwatch, a “refocus” (wait) command to boost initiative, and so on.

The biggest downside here is that firearms/projectile weapons easily trump melee and magic usage. Characters that use melee weapons first need to get close enough to use them on a target (you can’t click on a distant enemy to make the character automatically move and attack). Furthermore, it seems that the AI will always go for whoever is closest (even hostiles that use firearms), making melee combat very risky. As for magic, certain ritual books (when equipped) allow people to cast spells. The problem is that you’ll mostly see options that can debuff or those with a wild “miscast” chance that damages a teammate.

Overall, combat feels very basic. The investigators you bring along hardly seem unique in battle and, as such, only offer their distinct expertise while exploring or checking out objects. Finally, you’ll need to take note of weapon durability, as repeated usage will lead to a broken item that can no longer be used. It’s yet another hassle that’ll annoy you the further you progress in the game. 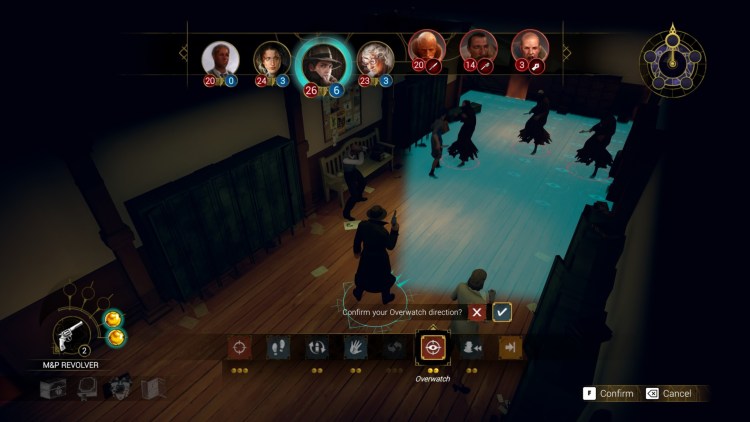 All out of Lovecraft

You can finish Arkham Horror: Mother’s Embrace within eight to 10 hours (a lot faster if you just ignore the clues on the side). Then again, it’s possible you may encounter several bugs and issues like I’ve also experienced during the course of this review. My problems included my main investigator getting stuck after checking a clue, as well as getting stuck because other NPCs moved next to them (and I had no way of getting out of a corner). There were also a couple of puzzles that made me scratch my head since the solutions felt completely unrelated to the clues I had gathered.

As for other technical woes, there’s a lot to unpack here. The graphics are fairly average and unspectacular. Heck, the graphics settings don’t even get saved whenever you relaunch the game, and there’s a “very high” preset that’s not included (the options will switch to the lowest category instead). Characters have clunky, stiff, and wooden animations. Meanwhile, the voice acting sounds bland and cheesy (the dialogue doesn’t sync with the speakers’ expressions). 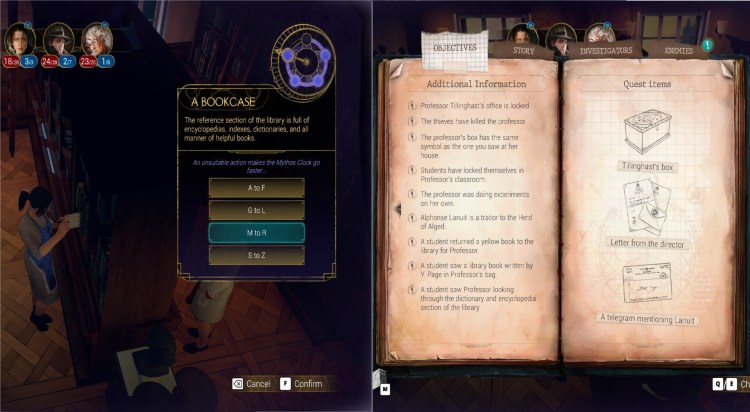 Speaking of clunkiness, the controls also need a lot of work. Movement is sluggish, dragging items to inventory boxes can be janky, and you can’t even change your keybinds. There were also item and object descriptions that were missing. Since only the code (i.e., “object_description_room”) shows up, you’re left wondering about what you actually need to do.

With all these technical issues and gameplay-related shortcomings, Arkham Horror: Mother’s Embrace just presents a tedious and unspectacular experience. There doesn’t seem to be any replay value whatsoever unless you actually wish to undertake the same frustrations once more. 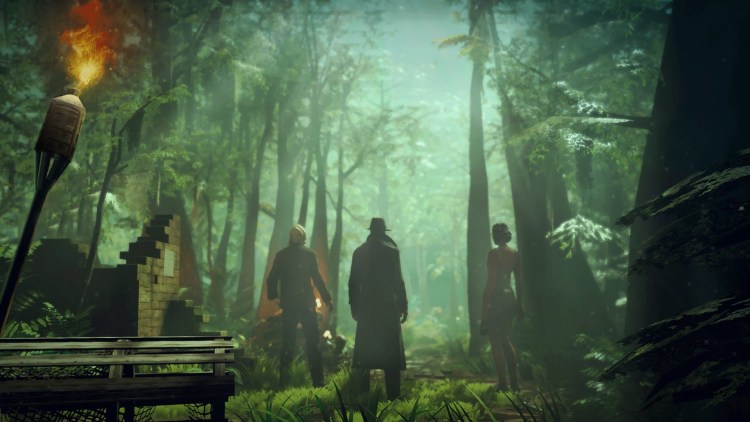 A title that's based on H.P. Lovecraft's Cthulhu Mythos and a board game from the 80s, where you explore clues and engage in turn-based battles.
4.5

Arkham Horror: Mother's Embrace suffers from a bland and unspectacular combat system, a questionable sanity gimmick, and a litany of technical issues that are too glaring to ignore. Although it's an adaptation of a board game, you might as well call it a "bored game" due to the tedium and frustration you'll experience.

Legends of Ellaria is now out of Early Access, but is it worth it?

By Dani Maddox5 days ago
Reviews