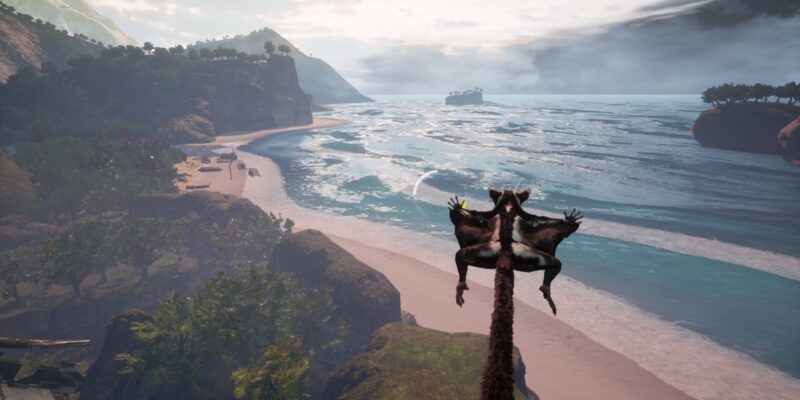 I don’t think I’ve ever reviewed a game quite as buggy, broken, and ill-considered as Away: The Survival Series. The worst part is that the idea’s great on paper. Exploring a beautiful island while gliding around as a sugar glider could have been an absolute joy. Instead, this game is as short as it is disappointing. I was asked not to play the exploration mode until launch day due to an incoming day one patch, but it’s still so broken that it’s practically unplayable for more than a few minutes at a time. Away? Yes, you absolutely should stay away.

Away: The Survival Series gets off to a promising start by introducing a family of sugar gliders. If you’re not familiar with the adorable little buggers, they’re gliding possums that are mostly found in certain parts of Australia. They’re super cute. You play as a 6-month-old sugar glider as he follows his mother, who carries his baby sister on her back. But a vulture abducts them, so it’s up to you to follow it across the land and save your family. The plot is ridiculous and has set pieces such as sneaking through an underground tunnel past sleeping rats and jumping from tree to tree in a burning forest.

Also, vultures feed almost exclusively on carrion, so I’m not sure why that bird was chosen as an antagonist. Even a vulture that eats live prey wouldn’t carry them around alive and place them in a nest for hours. It makes no sense. Away: The Survival Series also takes place in a post-apocalypse where all the humans are dead. It’s all dumb. But the game is actually narrated quite well, even if multiple voice lines sometimes play simultaneously. It’s a mess. 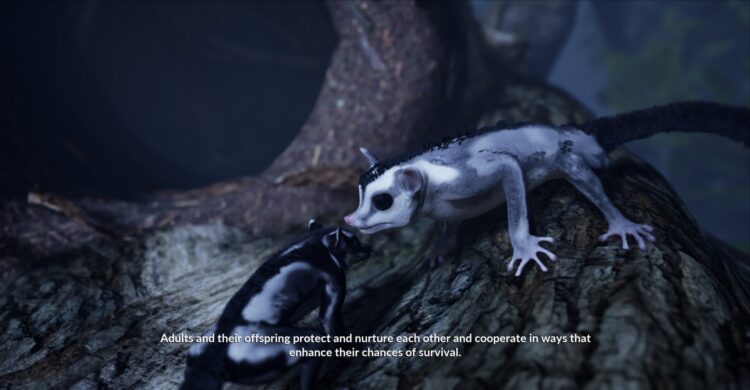 Away: The Survival Series is divided into story and exploration modes. The story mode, where you play solely as the sugar glider detailed above, took me about four hours to get through. In those four hours, I was bored and wished it would hurry up and end. Not the best look. Playing as a sugar glider could definitely be fun — in another game, I mean. The controls here are just awful, the camera feels clunky, the movement is awkward and clumsy, and the jumping is floaty. It’s extremely hard to be precise. The game attempts to get around this by simply having you aim at geometry and automatically jump to it by holding a lock on button before jumping.

It isn’t uncommon to get stuck in the environment. Landing in certain places will cause the sugar glider to glitch and be unable to move. Other times, you’ll walk into a space and then not be able to walk out. The sugar glider can also climb trees, which makes the controls so much worse. Whatever it is you want the sugar glider to do while climbing a tree, chances are he won’t do it. Attempting to walk out on a limb will see the controls get flipped around, and whether or not it’ll respond to inputs is up in the air.

The gliding is also quite poor. It’s horribly imprecise and gliding between things just doesn’t feel good. Also, while walking on certain objects, the sugar glider has a tendency to just fall straight off for no reason. I can’t remember the last time I played a game with such miserable controls. The story mode mostly sees you following the vulture, which means you’re just going to be turning on the game’s instinct vision and following the crummy line it draws. The level design is messy, often being too nondescript for its own good. It leaves breadcrumbs in the form of glowing mushrooms to compensate. 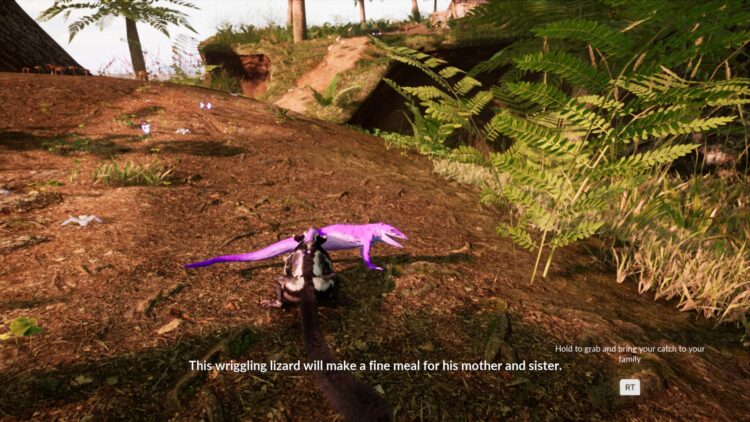 And the hits keep coming. There’s the janky combat, pitting you against spiders and snakes, among a couple of others. The sugar glider can dodge to either side and lock onto foes to tackle them. It also needs to eat constantly. Not eating will deplete its health, but you respawn with half health and half fullness upon death, so it doesn’t matter. Away: The Survival Series autosaves, or you can create manual saves, but one point my autosave bugged and just sat at a loading screen indefinitely, requiring me to manually close the program.

I actually had to revert to a manual save, as it would do the above every time with that autosave. The story mode also has a bunch of awful stealth sections. You have to hide from foxes, wolves, and gators at certain points. Oh, and a giant spider. If you’re not in cover, they see you automatically and eat you within a couple of seconds. It blows. These basically boil down to trial and error. There are also sidequests you can do from nests, but I only remember seeing nests two times in the entire story.

As bad as the story mode is, though, the exploration mode is so much worse. The idea is awesome: you play as a spore that can possess any living creatures. Once you possess one, it gets noted in your collection. There are also rare ones to find that I believe you can swap to at any time. Too bad this mode was broken for me. It crashed after several minutes of playtime every single time I tried to play it. On top of that, there’s nothing to do in this mode other than look around for animals to possess. 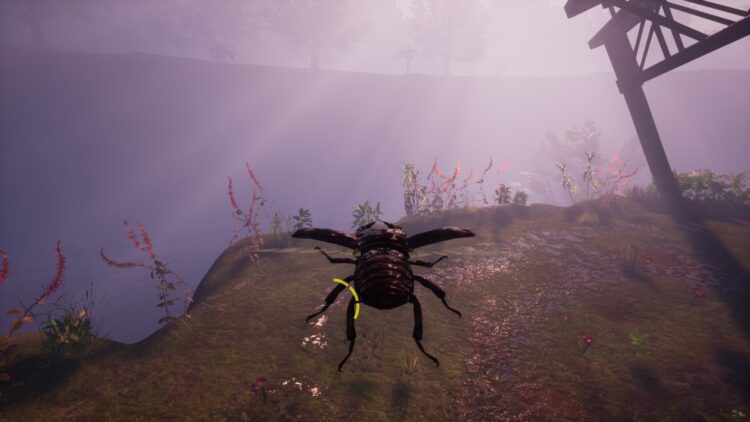 Once you possess an animal, it can’t do anything. And there are far fewer animals walking around the map than there should be, so it’s mostly you walking or flying in stretches of nothing while looking for something to possess. The spore can fly around freely, at least. One time, the spore was killed by a spider and just laid on the ground. Hostile animals don’t typically consider the spore an enemy, so this was very strange. I had to switch to story mode and then switch back. Another time, I possessed a lizard. It teleported around until the game crashed. The animals, unsurprisingly, also mostly control terribly. Most of them that I saw were somehow worse than the sugar glider.

Away: The Survival Series is the worst game I’ve played this year. If I have to say something positive, the textures and colors can be pretty at times. But the game’s performance is awful and even things such as the lighting gets messed up and rapidly switches between multiple times of day. This is an extremely buggy game with clunky controls and very little to offer anyone. It was nowhere near ready for release and you absolutely shouldn’t play it. The cuteness of the sugar gliders be damned.

Away: The Survival Series

Buggy, broken, and boring, Away: The Survival Series is awful all around.

A Juggler’s Tale review — No strings on me

By Joshua Chu3 hours ago
Reviews