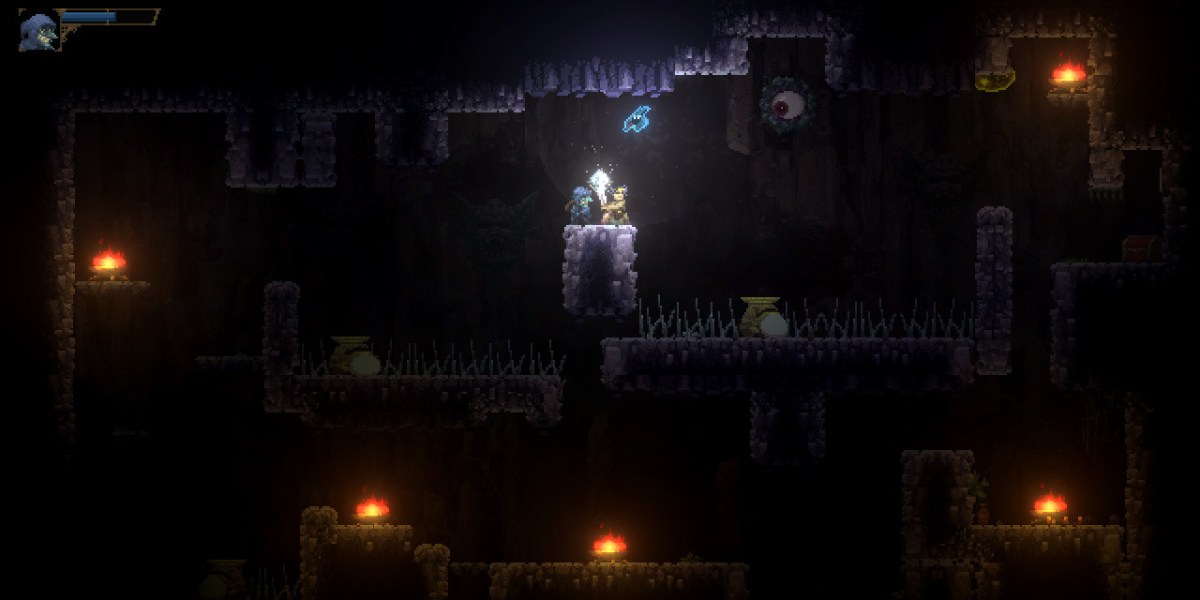 Occasionally I’ll come across an indie game that just isn’t harboring the attention it deserves. In the case of Unspeakable Pixels’ new Metroidvania, Batbarian, that couldn’t be more true. When you search for it on Google, it autocorrects you to search for ‘barbarian’ instead. And that’s a great shame because it’s going to make finding this game difficult for many who may be interested.

So you can consider this review both a piece of critique and a plea to consider trying Batbarian out. And considering how great Batbarian is, this game rising in popularity would be plenty deserved.

The gameplay loop is built upon combat, platforming, and puzzle-solving. At the forefront of Batbarian’s puzzle design is Pip. Pip is a radiant, magical bat who produces a natural light source wherever he goes. This light source can be used to power various aspects of the world.

Our protagonist is armed with several types of berries that can be used to manipulate Pip’s behavior. The standard berry has Pip chase it briefly before returning to your side. Another berry sticks in place, keeping Pip from moving for a short while. There’s even a berry that Pip can’t stand, which can be used to make your bat friend attack and expose otherwise immortal enemies. 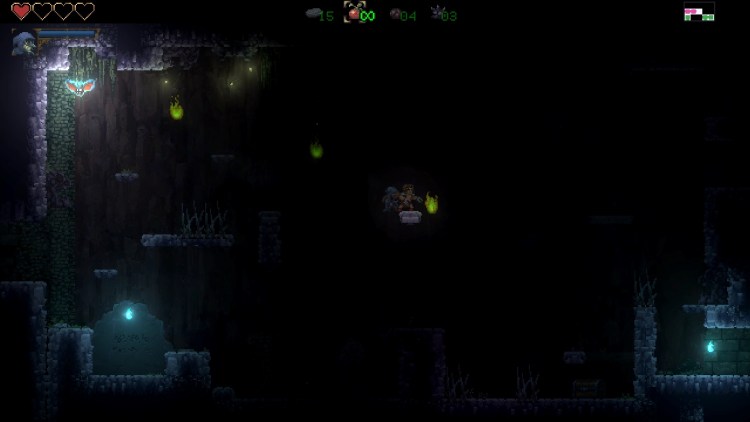 Pip is your primary source of light. This means that when he flies off to do his own thing, you are literally left in the dark.

Some of the game’s puzzles turn the focus toward physics-based solutions. These include pushing blocks to trigger pressure plates or to create a convenient platform to jump on. As someone who has a great fondness for puzzle design in games, I can tell a lot of care and thought went into these.

It’s no exaggeration to say that the puzzles found in Batbarian are just as well made as genre classics like Portal 2 and Limbo. That’s especially impressive when you remember that puzzle-solving isn’t even necessarily one of Batbarian‘s primary genres.

As for Awareness, it’s an intangibles stat that impacts a variety of different aspects. Most notably, it increases the size of the light sphere that naturally emits around you. This can help you see better in dark areas which are far from lacking in Batbarian. Early on, many rooms are very dark so you’ll find yourself relying on both your Awareness and Pit often. 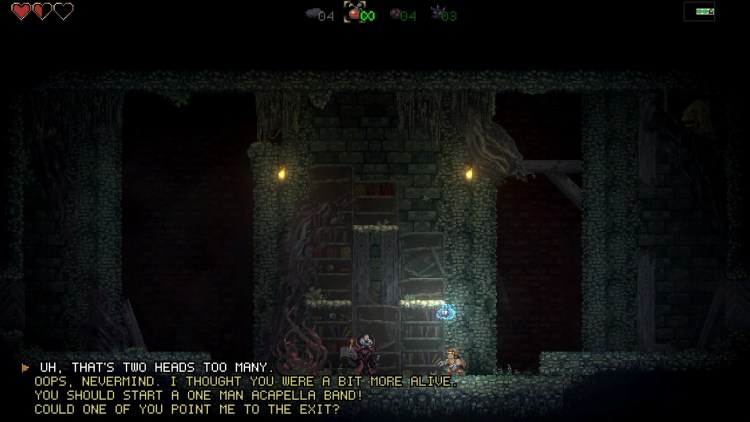 Given the darker art style, you’d probably expect Batbarian to be a more serious game. But the reality is it’s filled with funny one-liners and humorous interactions galore.

A slightly disappointing aspect of Batbarian as an RPG is its absence of equipment. You can find miscellaneous ability upgrades that help permanently boost your stats, but there are no weapon drops. I can understand why it wasn’t included, but it does leave Batbarian with a somewhat overly simplified progression model.

On the bright side, if you care more about narrative than other typical RPG aspects, Batbarian has plenty to offer. Throughout its 20-hour story, there’s a ton of funny interactions and dialogue that fits well within the game’s overall design. I think putting comedy in a game is risky as it can bomb hard if done wrong. But in Batbarian‘s case, it’s lighthearted and encouraged me to push on to see more of it.

Accessibility is a wonderful thing

Whenever I take a roguelike or Metroidvania on for review, I usually have to mentally prepare myself. Having played through Hollow Knight and Rogue Legacy, I was fully prepared to have my ass kicked by Batbarian. But then I saw it: in the menus was a wonderful setting that many games overlook — the ability to make the game easier.

Somehow the topic of making a hard game easier to play is controversial in this ‘git gud’ gaming culture of ours. I consider myself a core gamer who has played just about every competitive multiplayer game on the market. But you know what? When it comes to singleplayer I just don’t have it in me to try hard and get all frustrated anymore. 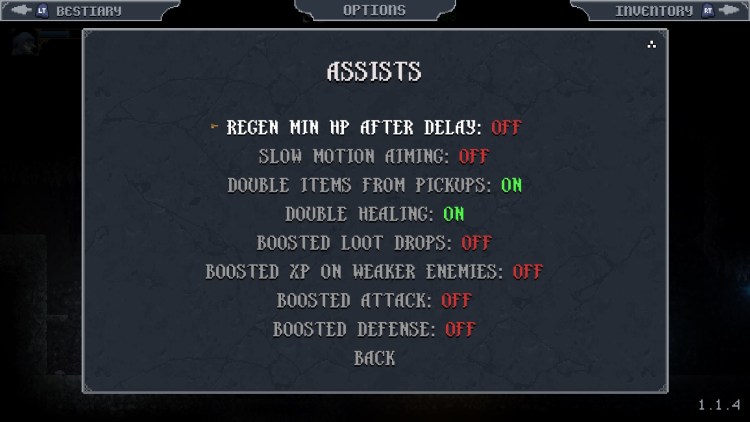 Don’t be put off by Batbarian‘s Metroidvania front. Thanks to the assists menu anyone can enjoy this game.

Having the option to make Batbarian easier is a blessing. When all of the assists are disabled, Batbarian turns into a typically difficult Metroidvania. At the forefront of this difficulty is the combat which primarily relies on prediction and quick reactions. Health pick-ups can be sparse so avoiding as much damage as possible is essential. Your attacking options are limited to either your basic sword attack, your allies’ magic, or sending Pip in.

Speaking of allies, throughout Batbarian you will meet and recruit several teammates. Their powers vary from things like magical attacks and bomb-throwing, making them more useful for specific encounters. However, you can’t just spam their ranged attacks to avoid going in yourself as they need to recharge their ability over time. Therefore you should consider them a backup plan to help avoid the more troubling enemies. All of this works well and ensures that there are always multiple ways to approach and win every battle.

The pixel art style Batbarian implements is hardly unique but has become a popular choice amongst indie developers for a good reason. It looks great, it ages well, and it’s relatively cheap to do. I can’t comment on the financial side, but visually speaking, Batbarian is a nice-looking game that draws clear inspiration from many ’80s classics.

My expectation was that the dark visuals would clash with the contrasting light-hearted comedy. But this isn’t the case. Surprisingly, they work well together and, if anything, help Batbarian offer a unique experience. Honestly, I’m glad it doesn’t take itself too seriously. There’s more than enough gritty, dark games out there already. 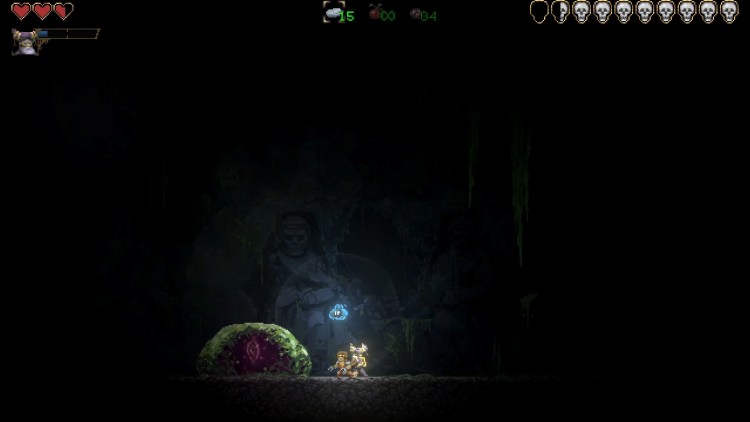 As for performance, it’s as expected. Just like most other pixel art games made in 2020, there are no frame rate issues to report. Batbarian runs at a locked 60fps which isn’t extraordinary nor problematic. As a PC gamer with a decent rig, I always like to be able to hit 144fps to get the most out of my monitor, but I can live without it here. This isn’t something like a precision first-person shooter. Batbarian‘s 60fps is perfectly playable, so it’s hard to complain.

I’m delighted to see more and more developers make fully rebindable controls the norm regardless of genre. It’d be easy in a game like this to just offer a handful of presets and call it a day. And yet Unspeakable Pixels went the extra mile and offered the ability to bind whatever button or key you want to whatever action. More options are always appreciated. Whilst on the topic, Batbarian is also comfortable to play on both a controller and keyboard so feel free to use either.

If it isn’t obvious by now, I really like this game. It’s a great shame that I have a bad feeling that Batbarian could become another indie game that will be forgotten to time. It deserves so much more because, minor design oversights aside, the sheer passion and effort on display here is nothing short of admirable. You can tell that Unspeakable Pixels has poured everything into Batbarian.

So if there’s anything you take away from this review, I want it to be a willingness to give Batbarian a chance. I’m not claiming this is a revolutionary Metroidvania but it’s a hell of a lot better than its limited initial reception would have you believe. The combat is fast and fun whilst the supporting puzzle and platforming elements are well put together. Considering the acceptable price, and amount of engaging, humorous gameplay on offer, you can’t go wrong.

Batbarian: Testament of the Primordials

A wonderfully crafted Metroidvania that should have genre fans plenty excited. It's blending of combat, platforming, and puzzling keeps the gameplay fresh and varied throughout its entire 20-hour story. It may not be the most revolutionary game ever made, but it does what it set out to do very well.

The Signifier review — The hand that feeds

By Jason Rodriguez11 mins ago
Reviews