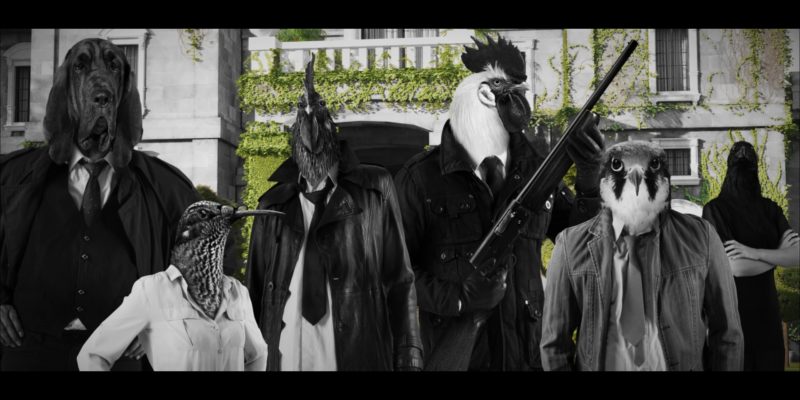 It’s easy to discount Chicken Police on account of its gimmicky premise, but animals and intrigue are the future of noir. There’s an unmistakable charm to the game that lures you in and holds you hostage until the credits roll. It features all the noir staples: hardboiled detectives, alcohol abuse, excessive monologuing, and a whole lot of racism — err, speciesism. The spirit of the genre lives in every frame, but it’s the game’s unapologetic style that transforms the experience.

Chicken Police is a stunner in every sense of the word. Everywhere you look is gorgeous black-and-white imagery drowned in film grain and vintage filters. Loitering in the streets are a set of old photographs come to life. Each character is a based on real models — their photos rigged and animated. This 40s worship is uniform across every facet of the art, making for a cohesive visual feast. The animal heads are a surprisingly fitting addition; they take a nostalgic, expressive look that adds to this mystifying quality.

The audio experience is equally impeccable. The city ambience and moody jazz are absolutely intoxicating. There’s nothing quite like the sweet sounds of reckless city driving while smooth tunes keep you company indoors. A wide range of raspy and smooth voices exchange clever, trope-y quips to complete the soundscape. Despite the dialogue density, Chicken Police is fully-voiced, with a strong lineup of voice actors bringing these characters to life. 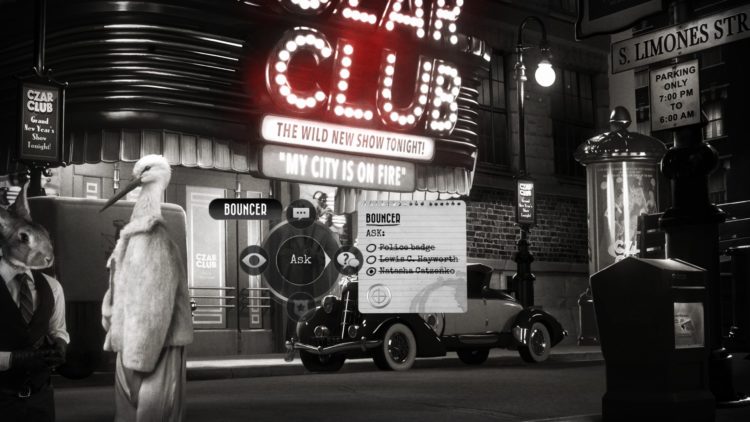 A night on the town.

The writing is crispy, campy, cheesy, but exceptionally smooth. The entire game is punctuated by the protagonist’s short monologues, pulling from a mosaic of inspirations. Characters banter back and forth, chaining together punchlines, jokes, and references. They’re united by their silver tongues and respect for noir archetypes. The cast is your typical spread of conniving, morally ambiguous tough guys and mysterious, seductive women. Each one deceptive and nuanced in their own ways, reflected in your many interactions with them.

Much of its humor and characters belong to the outdated social era it draws from, and replacing humans with animals doesn’t always remedy that. As a result, I can’t imagine everyone falling in love with its writing as I have, but a certain grace can’t be denied. Nonetheless, its quality storytelling goes a long way in building up a genuinely tense, captivating mystery. Its twists are satisfying and well constructed, while its simple gameplay succeeds in building enormous amounts of tension.

Months out from his retirement, seasoned cop Sonny Featherland finds himself shoulder to shoulder with Clawville’s most dangerous once again. He contacts his old partner, Marty MacChicken, who’s a touch too eager to jump back into the fray. The plot features a top celebrity, a powerful gangster, and a string of threats and murders — all the trappings of a classic mystery. But, the veteran cop is not the trigger-happy thrill seeker that his partner is. Chicken Police centers its gameplay on tough choices and quick deductions. 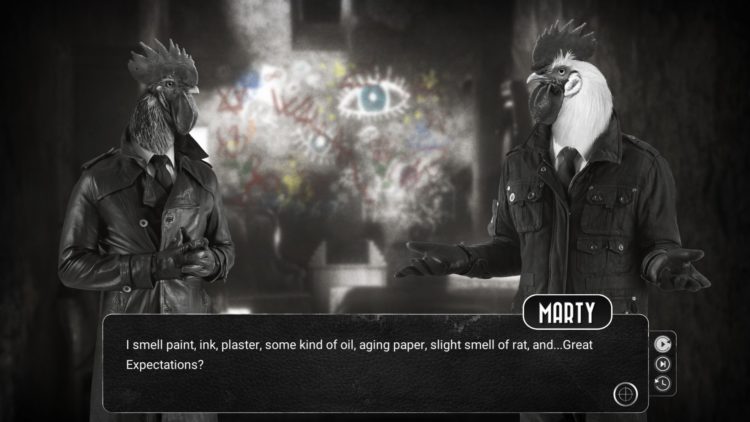 The dynamic duo in action.

The game promotes a cathartic, casual experience, with a comfortable challenge every now and again. Much of it consists of exploring the city’s hotspots, mingling with the locals, and prodding them for information. These point-and-click and visual novel stylings drive much of the gameplay. There’s plenty to interact with, and plenty the duo has to say about everything. I found value in taking my time to soak in the sights, sounds, and silly comments. Chicken Police’s worldbuilding endeavors are to be admired, given the sheer amount of detail in every environment and conversation.

Combing through the details isn’t all for personal enjoyment, however. Characters interactions often see a climax in the form of a questioning session, where the target and Sonny verbally spar. You’re given questions to ask — some putting you on the target’s bad side, and others earning their trust. Each questioning minigame gives you ten chances to extract the truth, later grading you on your performance. It’s here where characters’ complexities come to light. Every character is given three similar traits, with one conflicting trait to throw you off guard.

With so much to learn and track, prepping for questioning was like preparing for a test. Of course, with the game being about chicken cops, that information was easily retained. Towards the end of each breadcrumb trail, Sonny turns to the classic cork board to Frankenstein himself a hypothesis. Despite Chicken Police’s linearity, I never felt restricted by the options I was provided. The game does a fantastic job feeding you the right information at the right time. I always arrived at the solution exactly when the game wanted me to, and so every solution was intrinsically rewarding. The game’s design respected my problem-solving abilities. 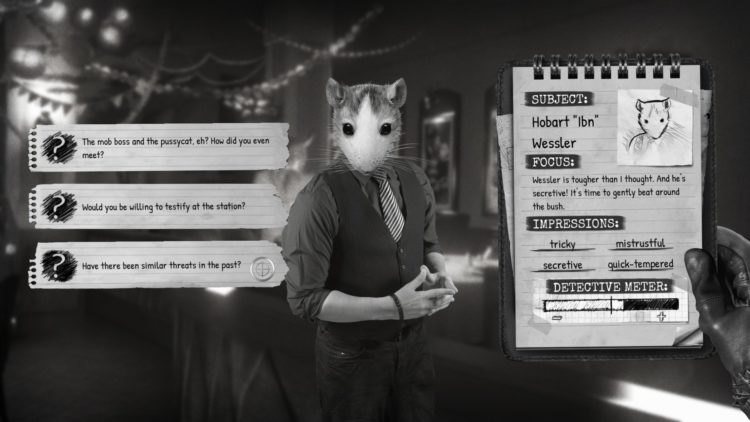 A few questions before you go.

In an effort to break up the monotony, the odd puzzle or arcade shooter minigame was snuck in at various points. While I was less than enthusiastic about many of them, the change in pace was greatly welcome. They help to highlight standout narrative beats, even if they were carried by the strength of their novelty alone. Chicken Police clocks in at 5 hours, making it difficult to knock it for packing said hours with extra variety.

Chicken Police, however, does spend a lot of time weaving subplots that never lead anywhere. Interesting character details are paraded around, then swiftly forgotten. Certain motifs make numerous appearances, but ultimately fizzle out and amount to nothing. While the game ends on a strong note, I can’t ignore that tinge of disappointment over those loose ends. Overall, each of the five chapters are precise and focused, but there’s plenty of room for more stories. A potential follow-up would have plenty to build upon, and grander mysteries to explore. 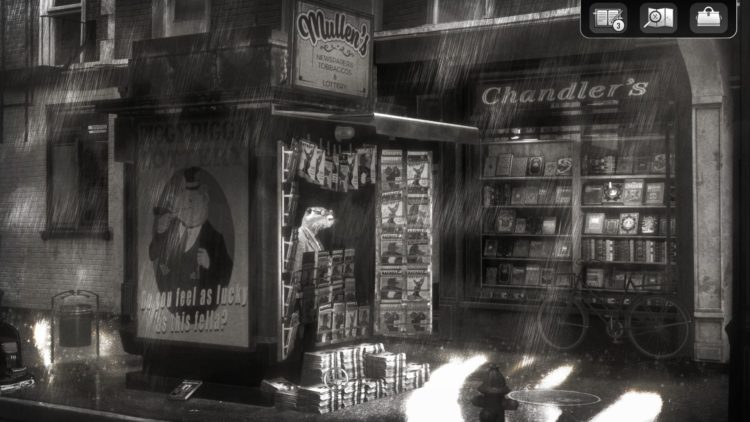 So many stories to tell.

I was pleasantly surprised by Chicken Police. It’s a gem of an indie game, and my pick for the most unexpected release of the year. It draws from a healthy pool of inspirations including classic film-noir, Cowboy Bebop, and Hotline Miami. The game is well-written, well voice-acted, with unparalleled aesthetics. The decision-making and puzzle-solving is nothing to write home about, but within the context of the narrative, the gameplay suits Chicken Police beautifully. It’s a casual experience fueled by a gripping mystery.

A slick noir mystery with an intoxicating atmosphere and unmatched aesthetics. Combined with its sharp, campy writing and an intriguing storyline, Chicken Police is an indie gem that shouldn't be missed.