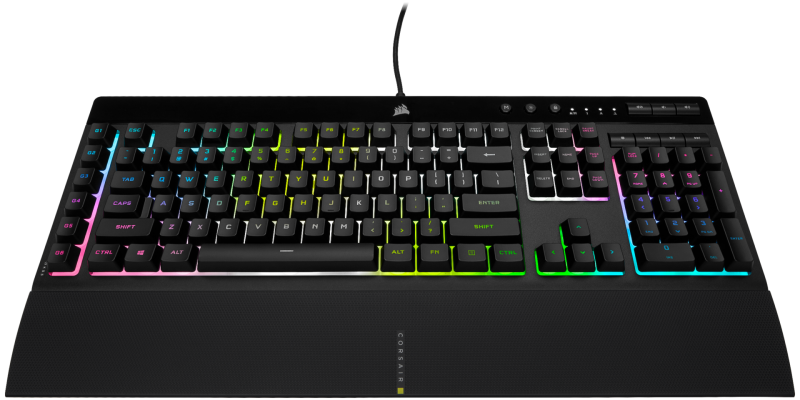 I should start this Corsair K55 RGB Pro XT review by saying that I haven’t used a membrane keyboard since I was in the first or second grade. My family had an old desktop we all used, and while I don’t remember exactly how that keyboard felt, it was much different from the mechanical boards we’re used to nowadays when thinking of a “gaming keyboard.”

The K55 RGB Pro XT, although a gaming keyboard, does not feel like one. It absolutely looks like one, though. With its brilliant RGB and all-black body, that’s without a doubt. But in practice, this keyboard’s great for more than just gaming. It’s a regular typist’s dream, and it will likely become the only keyboard I use.

Gaming On A Cloud

The first thing you’ll notice when you use the K55 RGB Pro XT is how quiet it is. Thanks to its rubber dome keyswitches and plastic chassis, this board is remarkably quiet. There’s no annoying “ting!” that comes with each keystroke, so you won’t be keeping anyone up with your noisy keyboard, and nobody in your Discord call will hear you mashing a button for a QTE. That’s not to say the keyboard is silent though. Instead, it produces a nice, satisfying “clack” with every press.

Regardless of why you’re using the K55 RGB Pro XT, whether it’s for gaming or typing up an email, you’ll feel like you’re typing on a pillow. Its keys are soft to press thanks to the membrane behind them. You won’t get any finger strain from typing, even after hours. For gamers, that means a little less stress on your WASD fingers.

Where you won’t find too much comfort, is in the K55 RGB Pro XT’s palm rest. It’s advertised as a “soft textured” rest, which is an incredibly strange way to describe a piece of hard plastic. The palm rest isn’t plush and doesn’t offer any real comfort. It’s the palm rest equivalent of a park bench, in that it’s better than nothing. Compared to my usual keyboard, the Razer Blackwidow Elite, and its plush palm rest, having my hands rest on this piece of plastic felt like a significant downgrade. If you want though you can just leave the palm rest off, as it’s detachable. But again, a sub-par palm rest is better than none at all. 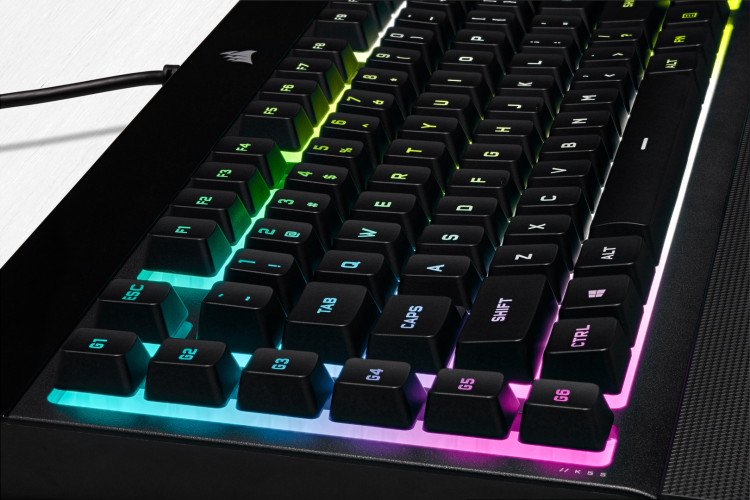 The K55 RGB Pro XT’s layout is where things start getting dicey. This is a massive board, with Corsair describing its form factor as “Extended full-size.” It earns that title too, coming in at a massive 19 inches long and 6.58 inches wide. Comparatively, my Razer Blackwidow Elite is a full 1.5 inches smaller length-wise than the K55 RGB Pro XT.

I do have to praise Corsair’s engineers for one, tiny modification in the keyboard, though. There is an indent on the rightmost side of the CAPS key, something that when I first used the K55 RGB Pro XT, I found strange. But in practice, it’s a brilliant little change. If you fumble your inputs (like me), you could sometimes end up pressing CAPS in-game instead of the A key. Thanks to this tiny indent, it’s much harder to press CAPS by accident. Again it’s not a massive change, but one that I greatly appreciated.

As for the K55 RGB Pro XT’s gaming performance, well, it’s wholly unremarkable. In fact, it’s what should be standard. Inputs are responsive, with no noticeable delay at all. It polls at 1000Hz/ 1 msec, which is the standard, so you shouldn’t expect anything out of this world or disappointing. If you’re looking for a gaming keyboard with a higher polling rate, check out our review for Corsair’s K65 RGB Mini.

It should be noted, though, that if you like to game on mechanical keyboards as opposed to membrane, you’ll have to go through a bit of a process to switch boards. The K55 RGB Pro XT connects to devices via a USB 3.0 Type-A jack. That’s right, no USB-C here, so you won’t be able to hot swap keyboards. That said, I’ve played a lot of Call of Duty Black Ops: Cold War on this board, and the experience has been just fine.

The K55 RGB Pro XT comes packed with extra features that some users will find helpful or entertaining. The first, and most obvious addition are the six buttons located on the leftmost side on the board. Labeled G1 through G6, these are the keyboard’s dedicated macro keys. You can address a series of inputs to each key, giving users access to six macros right at their fingertips.

However, I hardly ever used the feature since the games I play (first-person shooters and RPGs), don’t really necessitate macros. I did bind a couple of them to common commands used in writing (control + A and control + C for instance), but that was about it.

While they’re not useful to me, and I would much prefer a version of this board without these keys, I can see how they could be useful to other users. RTS players can bind a series of commands to one key, and content creators can use the keyboard’s built-in Stream Deck integration to switch scenes or input streaming commands. However, I believe the average user would rather have a keyboard that’s an inch smaller instead of six extra keys. The K55 RGB Pro XT also comes with brightness and windows lock buttons. Standards on any gaming keyboard with RGB. 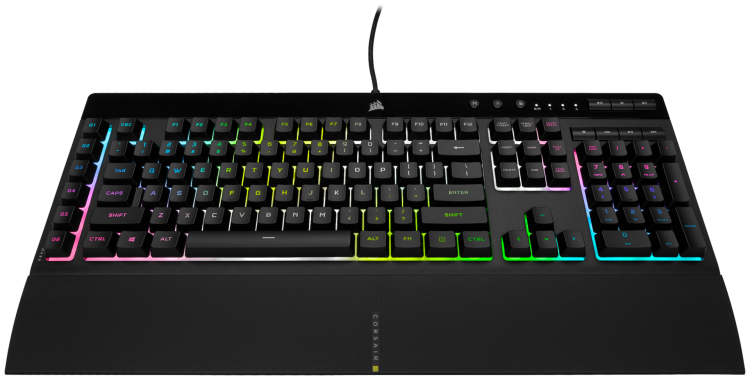 As its name implies, the K55 RGB Pro XT comes loaded with colorful lights. Each key has its own individually lit backlight, and every light is individually programmable through Corsair’s iCue software. The limits to how this board can be lit up are your imagination. If you’re like me, though, and just want a nice rainbow to wash across your keyboard, it’s never looked better. The per-key RGB and membrane combined make for some incredibly vivid lighting effects. That’s something you may not get with the K55 RGB Pro, a cheaper version of this board that features 5-zone RGB instead of per-key.

However, when I initially plugged in the K55 RGB Pro XT, iCue had a rather difficult time detecting it. As it turns out, I had an outdated version of the software. However, when prompted to update, it wouldn’t. I had to uninstall and reinstall iCue, which requires a system reset, to have my keyboard detected. If you’re thinking about picking up this keyboard, do yourself a favor and download the latest version of iCue before going to the store.

Big performance in a big package

While Corsair’s K55 RGB Pro XT is the biggest keyboard I’ve ever used, it’s also one of the best. As someone that writes a lot (like I am right now), the K55 RGB Pro XT offers a premium experience. Typing on this keyboard is an absolute dream, and while I’d rather have a softer, higher quality palm rest, I can look past it for the delight that is typing on such a responsive membrane keyboard. After work, I don’t even have to worry about switching to a more responsive board. The K55 RGB Pro XT gets the job done, living up to its “gaming keyboard” title.

Of course, it’s not a perfect board. While I regularly used a full-size keyboard before receiving the K55 RGB Pro XT, I couldn’t ignore the extra inch in length taken up by its six macro keys. If you don’t have a lot of desk space for this behemoth of a keyboard, it simply isn’t for you. That goes double if you plan on gaming. It’s almost guaranteed that your mouse will slam into the side of the board.

If you do have the room to spare though and can put the K55 RGB Pro XT’s macro keys to use it might just be one of the best all-around keyboards for the money. It’s satisfying to type on, offers a competent gaming experience, and comes with outstanding RGB lighting. Priced at just $69.99 USD, the Corsair K55 RGB Pro XT is a fantastic keyboard offering a premium experience that won’t break the bank. Corsair is setting a standard for keyboards with this price point. I’ll be impressed if any other manufacturer can do better.

The Corsair K55 RGB Pro XT is a standout keyboard with very few flaws. It offers a premium typing experience all while being a solid keyboard for gaming. While it's too large for the average user, anyone with the desk space and reasons to use its macro keys should consider the K55 RGB Pro XT as their daily driver.