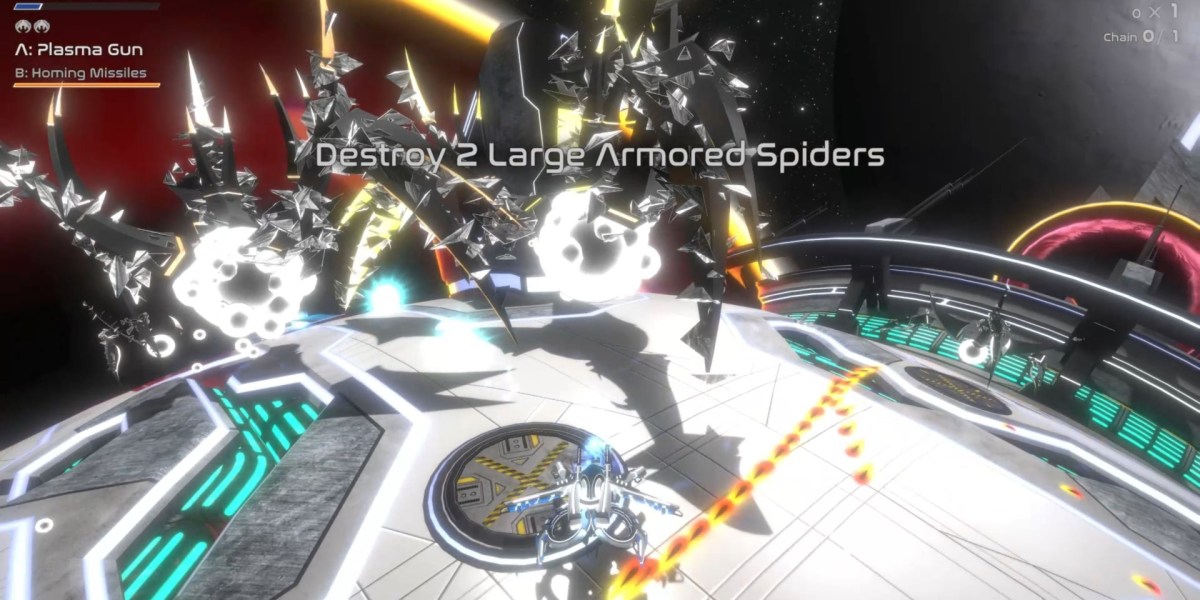 If you look back through the annals of arcade-centric shooters, I feel as though there are two distinct eras: “Before Geometry Wars” and “After Geometry Wars.” The title helped put the twin-stick shooter back on the map for console fans and kicked off a renaissance of neon-hued shenanigans that continues to this day. Following in the familiar footsteps of Super Stardust HD, the newly released Curved Space looks to finally shave off a slice of the arcade gaming pie.

Try to think of a twin-stick shooter that isn’t futuristic or firmly entrenched in the science fiction genre. Go ahead. I’ll wait… With that in mind, Curved Space seemed almost predestined for interstellar combat. You play the role of pilot, performing some ill-defined mission, in a relatively unoccupied location in space. At some point, after you complete the initial set of tutorial stages, your ship is ambushed by two of, well… you.

Having a facsimile of yourself sneak up on you may sound unrealistic, but let’s not lose track of the fact that you’re also flying a futuristic spaceship. The doppelgangers appear to be parallel universe versions of yourself. Although you have your own shit to worry about, you end up lending these hapless schmucks a hand. It doesn’t take long to realize that your newly materialized compatriots have very different motivations for jumping dimensions.

Throughout the campaign, you have the chance to make decisions about supposed branching paths in the narrative. The issue is, under most scenarios, you still end up needing to complete all of the available options anyway. It ultimately was only the illusion of choice, when in reality the overlap between paths is pretty damn similar. Eventually, there are a couple of legitimate forks in the narrative, but it felt like the gameplay never really changed in any substantial way. 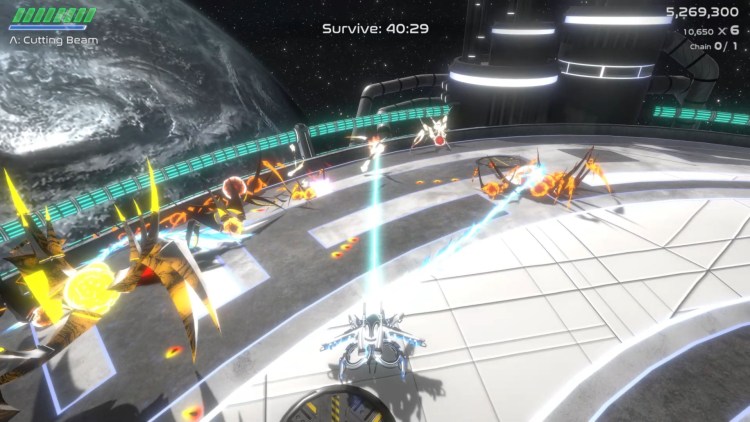 The action itself plays out on a series of different heavenly bodies. Utilizing an anchored over-the-shoulder third-person camera, you’re extremely close to the action. The ship you pilot throughout the campaign is also anchored Super Mario Galaxy-style to each stage’s surface. The amount of explorable space on each station or planet is limited, as they’re usually designed to loop around on themselves like a super deadly Mobius strip of explosions.

Speaking of death, you will be dealing it… a lot. The one area where the design team didn’t skimp on was the vast armory at your disposal. If you can think of a weapon, Curved Space likely has some permutation of it. I mean, there’s a whip cracking attack like you’re the Indian Jones of slaughtering space spiders! Alongside standard blasters, shotguns, rockets, and lasers, there are a few other treats that I don’t want to spoil. 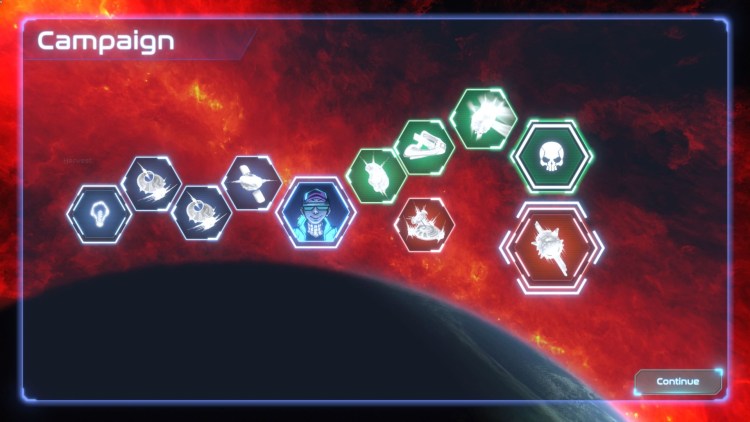 When you’re not trying to blast adversaries back to the stone age, you can also use a tether to perform a series of different tasks. In some scenarios, you can use the tether to chain a series of enemies together. If you manage to kill a single member of a chained set of enemies, it will create a cascading effect that harms or dispatches everyone in the chain. Another use would be latching on to certain enemies to leech energy from their ship to power yours. Lastly, a common mission objective is to chain the opposition to posts sticking out of the ground. The planet can then leech their energy to replenish itself.

An aspect of the design where Curved Space legitimately excels is the moment-to-moment combat. The fluid twin-stick action is on full display and it impresses. Just don’t try to use the PC control scheme. It legitimately took me five minutes of futzing with the sensitivity, only for me to give up and plug in a controller. With the sticks under my thumbs, I found that it felt very reminiscent of the previously mentioned Super Stardust HD, leaving me legitimately entranced for the better part of an hour. 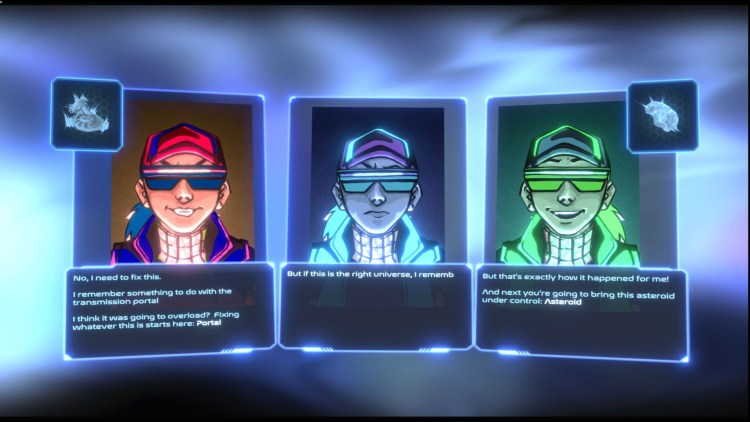 Though Curved Space had quite a few options on the arsenal side of things, the same cannot be said for a majority of the remaining design. It felt like the enemies were damn-near exclusively of the space arachnid variety. Sure, the interstellar spider came in a couple of different forms and sizes. But aside from a couple of one-off models that were used sparingly, there wasn’t much else to fight against.

Curved Space’s boss characters suffered from a similar monotony. All you needed to learn was how to tackle each character type (of which I think there were less than 5 variations) and repeat the identical tactic for every stage it appears. You will also get very familiar with the “gather energy for the planet,” “stand your ground for X minutes,” “Kill the giant-sized unit,” or the “only kill a single unit variety” mission types, because that is about all you’re going to get to play. It felt like each stage repeated this same handful of objectives at every location. 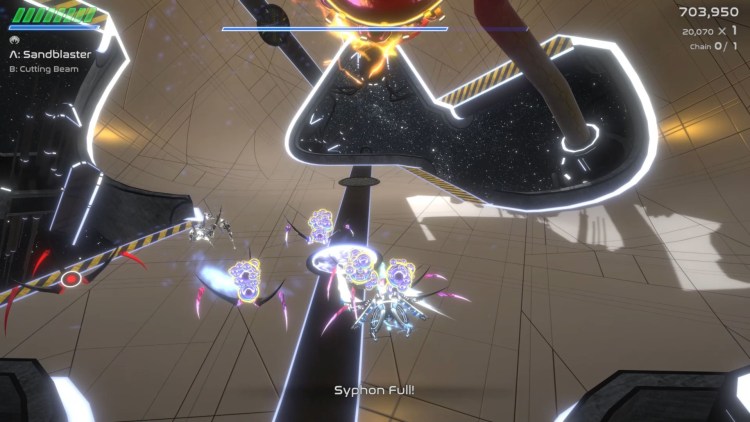 The problem with having so few locations, mission types, or enemies, is that it doesn’t take long for the action to become homogenous. Aside from enemies that would occasionally get bigger or gain more shielding, it was rare to see anything truly new. Fortunately, I was able to topple my first campaign playthrough in just over two hours, so it didn’t overstay its welcome.

I genuinely enjoyed the majority of my time with Curved Space. That said, it was hard to shake the feeling that I was trapped in an infinite loop, playing the same damn thing, over and over again. The lack of stage, enemy, and boss variety were among the primary reasons for the continuous Déjà vu. Everything looked and played almost exactly the same, just superimposed onto one of a handful of maps. If you’re looking for a mindless good time, Curved Space will certainly fit the bill. However, if you’re looking for a bit more substance in your shooters, you should probably start your hunt elsewhere.

Despite its strong first impressions, Curved Space lacks the true variety to stand out in the crowd. You will find plenty to enjoy over the span of its brief runtime, but it isn't substantial enough to warrant a replay. Only diehard genre fans need apply.

Phasmophobia dev is planning on a “large overhaul” to the game, VR changes