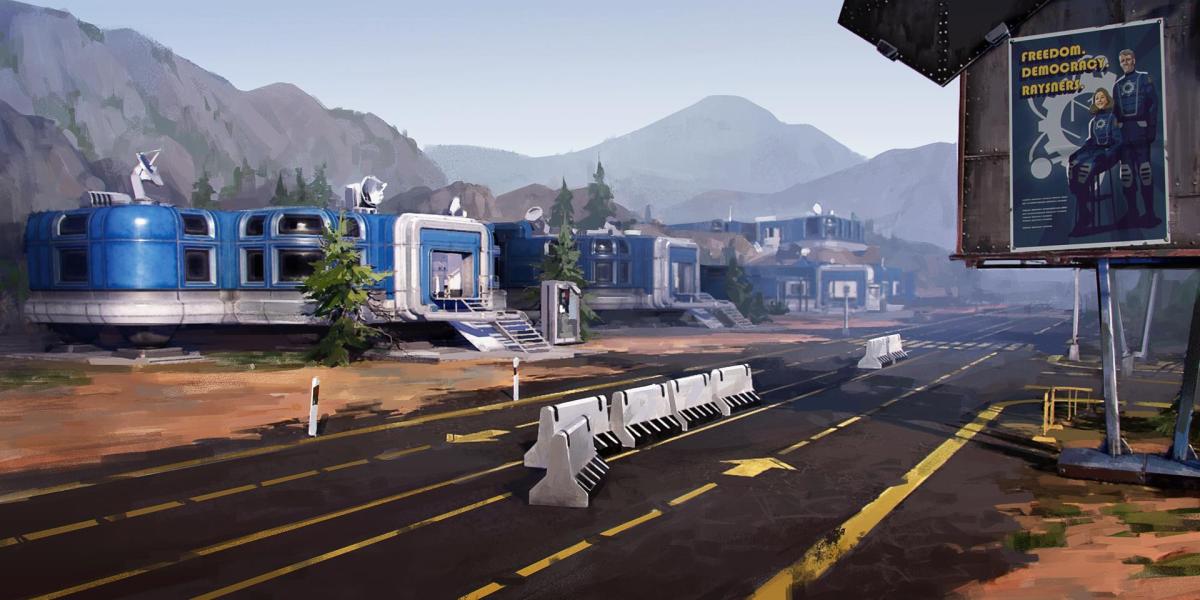 The novel Roadside Picnic was published all the way back in 1972 in the Soviet Union. It was a story about extraterrestrial beings that left behind Visitation Sites filled with strange phenomena and otherwordly forces. Coincidentally, the novel became highly influential, leading to direct and loose adaptations (i.e., the S.T.A.L.K.E.R. series referenced some key elements). Then, there’s Encased, a sci-fi, post-apocalyptic RPG from developer Dark Crystal Games and publisher Prime Matter.

Encased was originally backed by Kickstarter funding before it became part of Steam’s Early Access program in September 2019. Since then, it has undergone a lot of changes and numerous hotfixes. I was able to try out the latest build and, although there were some flashes of brilliance, I also noticed several nagging issues.

The Visitors and CRONUS’ wings

As mentioned earlier, Encased is heavily influenced by Roadside Picnic. At the start, you’re told of mysterious entities that arrived on the planet, leaving only relics of their passing. This site became housed inside the Dome, a superstructure overseen by an organization known as CRONUS.

Once you begin the campaign, you’ll be able to create your character and select the “wing” that they’re part of as one of CRONUS’ employees. For instance, there’s the White Wing which is where most of the scientists go to, and the Silver Wing which is the corporate branch. Then, there’s the Black Wing filled with soldiers and mercs, as well as the engineering and repair-focused Blue Wing. Finally, the Orange Wing is where all the criminals and miscreants are assigned.

As you get set on your journey, you’ll realize that something seems amiss. More inhabitants of the Dome become afflicted by a sickness that turns them mad. Then, just when you thought things couldn’t get any worse, a Maelstrom suddenly flares. 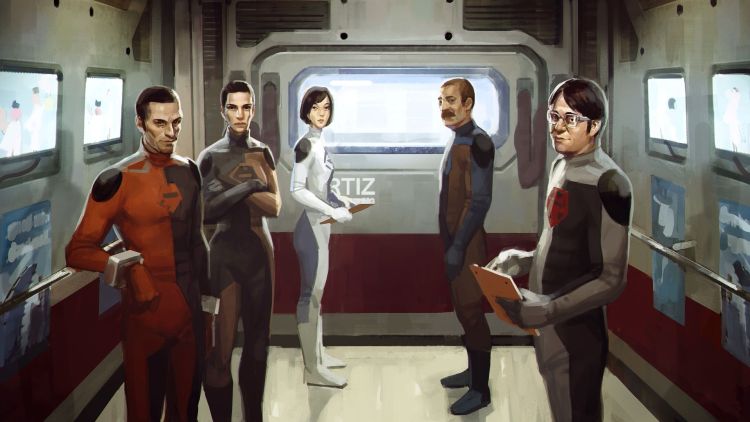 Encased uses nine types of attributes (i.e., Muscle, Deftness, and Psyche), as well as over a dozen abilities (i.e., Light Weapons, Heavy Weapons, Science, Criminal, and Survival). Your chosen wing provides boosts to your character, such as the Silver Wing adding +1 Charisma, +20 Psionics, +20 Speech, and +2 skill points whenever you level up. Likewise, certain dialogue options only become available depending on the branch that you belong to.

As for your active and passive skills, think of these as a combination of the main ability and, in some cases, a governing attribute. For example, having 30 points in Speech lets you use the “Charm” option when talking to certain NPCs. However, the “Intimidation” and “Conviction” responses can only be unlocked if you have six points in the Muscle or Brains attributes respectively. Forget the notion of strict classes because Encased encourages you to create hybrid characters that can have multiple specializations. Then again, I’ve come to realize that putting more points into the Criminal ability is extremely beneficial. You’ll see that many decent gear pieces can only be found behind locked doors or inside locked containers, so this is where the Lockpicking skill comes in. To an extent, you’ll probably want to use the Pickpocket skill on hapless NPCs too. 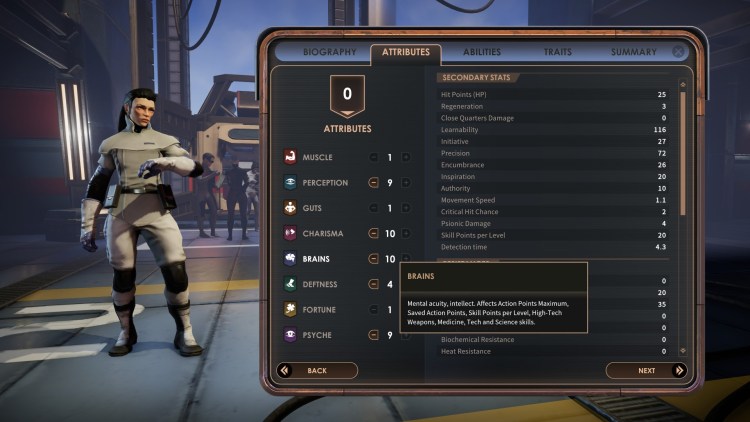 Think of Encased as akin to Fallout and Wasteland, classic CRPG franchises that have become cornerstones of the genre. It’s a story-driven adventure, one where you’ll meet various NPCs who’ll have a lot to say about the world and its inhabitants. Dialogue options abound such as the aforementioned replies based on your chosen wing. You could even choose to bribe or barter with them if that’s what you fancy. Also, there are those that might require an attribute or ability check. For instance, you’ll encounter a group of bandits who are about to rob a gas station. If you pass the speech checks, you could convince or charm them to avoid hostilities. Although there are technically no “wrong” choices, some important decisions can lead to repercussions in your playthrough.

It’s also possible to find companions who are out and about. In my case, I reached the Junktown Slums where I met a White Wing scientist named Katarzyna and an Orange Wing convict named Crump (who, uh, likes to crump and bash people with melee weapons). As far as I know, you’re limited to just two companions, and I’m not really certain as to all the others that could accompany you on your journey. 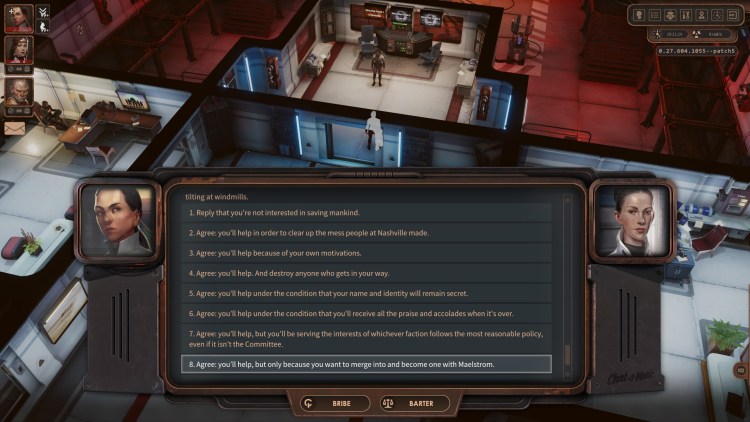 Like other CRPGs, Encased uses a turn-based combat system. If you ambush an enemy or if you get spotted, the encounter begins. You’ll then be able to use your weapon skills or other abilities that have been unlocked. There are a plethora of weapons and contraptions for you to use from pistols, melee gear, and psionic gloves to energy rifles and explosives. It’s even possible to find Servoshells (or Power Armor) to help beef up your defenses. Additionally, you’d be able to activate certain perks like first aid, scanning, or mechanical repairs. All of these cost action points (AP). Even if you didn’t spend all your AP during your turn, you can use excess points to bolster your defense rating or save some extra ones for the next round. Regrettably, there’s no overwatch option which has been a staple in the genre.

Perhaps my favorite part of combat (one that makes it hilarious) is how you could eliminate most foes while sneaking around. Simply activate your character’s stealth, fire your weapon, and avoid the red visual circles of your opponents. Move your character further away if an enemy gets too close, and keep blasting them to your heart’s content. Technically, the battle hasn’t begun yet, which means you aren’t using up your AP. 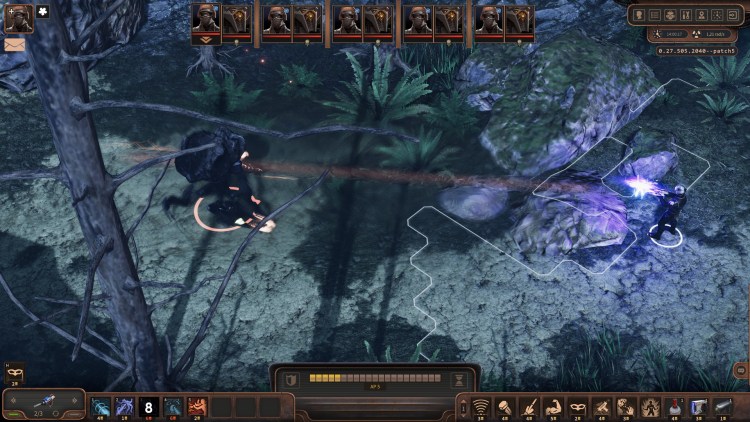 Sadly, I also noticed a lot of issues while playing Encased‘s latest build. From the get-go, I wasn’t too keen on how character creation had attributes affecting multiple facets (i.e., AP is affected by Brains, Deftness, and Fortune). Likewise, I noticed that selected traits didn’t show their bonuses upon finishing the process. An example was when I chose “Bright Mind” which should’ve added bonuses to Brains, Science, High-Tech Weapons, Medicine, and Biochemical Resistance. These increases weren’t present in the final stats screen, so I was confused if they were actually active.

Then, there’s all the clutter. To be clear, I’m a believer in the notion that RPGs should have lots of loot for players to discover. But, there has to be a limit. Otherwise, you’d just waste the player’s time. Encased tends to go overboard here with areas that have dozens of containers, boxes, and objects that you can open. In certain instances, containers and corpses would have random drops. Conversely, some wouldn’t have anything for you to pick up. It gets even worse when you add combat to the equation due to fist and skull icons popping up in the landscape since these represent how enemies were attacked or killed 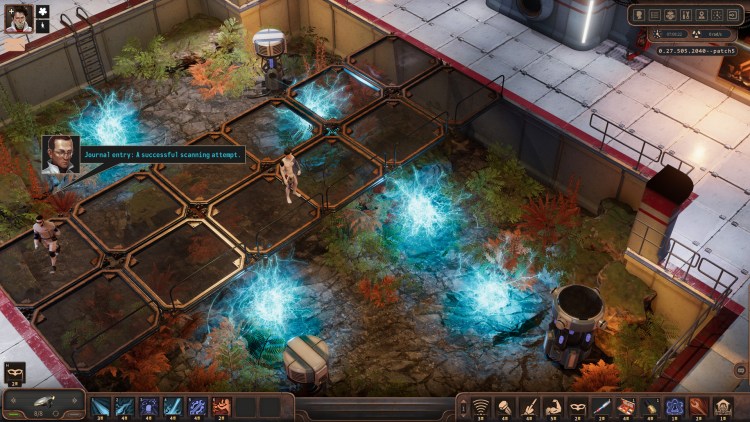 Speaking of combat and companions, your control over them is fairly limited. You can tell them to move to a designated location while out of combat, but there are times when your character also moves with them or they’d go back near you. You’ll need to click on their portraits and tiny icons just to do this, even though just pressing the tab key to cycle between characters would’ve been optimal. It leads to moments when they’d get hit by friendly fire shots while I’m trying to snipe targets.

Moreover, companion weapon skills won’t appear on the action bar if selected while out of combat and they seem to assign points automatically whenever they level up. If you found a pal who’s great with energy gadgets or long-range rifles, that person can’t make use of the stealth-and-snipe gameplay to whittle down hostiles before you’re detected. It’s a very odd decision to make when it comes to the game’s design. 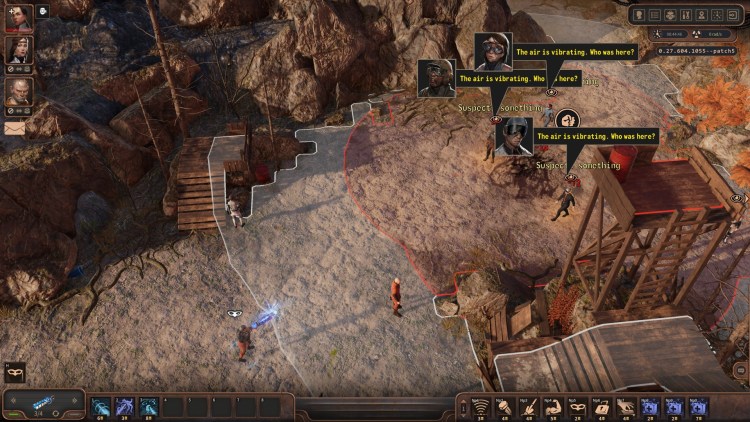 Encased: What can we look forward to?

Encased can feel very rough around the edges and messy at times. There are quests that you can track, but they won’t get marked on the map. Others, meanwhile, could simply bug out (like being unable to interact with a quest giver in the Crossroads after killing all the afflicted). I’ve even noticed a particular bug that prevents you from using keyboard controls after loading your save (you’d have to restart the game).

To be fair, we’re still at the Early Access stage and the developers have promised additional fixes, improvements, and voice-over work. These are sure to add to the atmosphere and immersion of Encased‘s world. Indeed, Encased is a promising and ambitious project, so I hope that these issues are ironed out once it graduates from Steam’s Early Access program in September 2021. 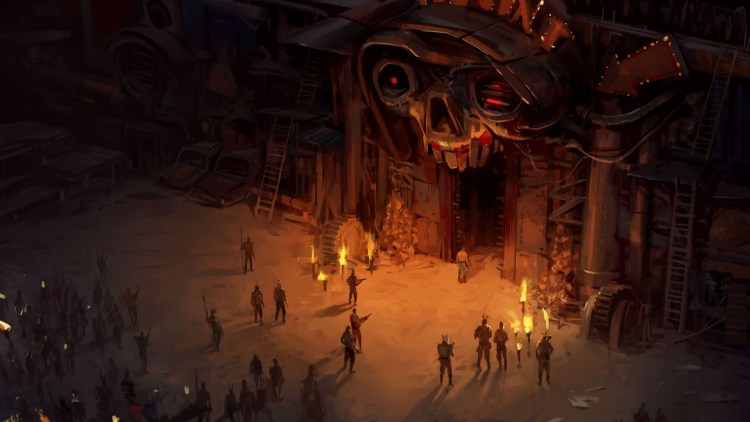 The Beastmen rework for Total War: Warhammer II has been unveiled

By Andrew Farrell14 mins ago
Previews