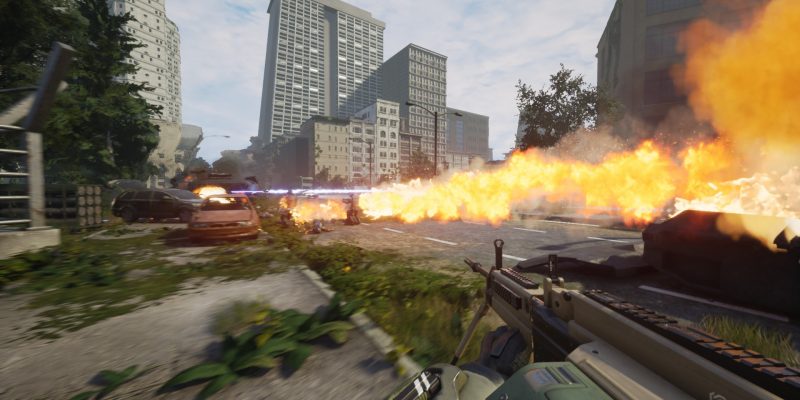 The concept of a hybrid-genre game is interesting. By combining the best traits of two genres that don’t share much in common, it’s possible to create a unique product that differs greatly from its competitors. This is exactly what developer Ammobox Studios is attempting to achieve with its latest title, Eximius: Seize the Frontline.

Eximius is a self-proclaimed FPS/RTS hybrid. It demands the player to use both their first-person shooter mechanical skills and real-time strategy game sense at the same time. It isn’t the first game to attempt this genre combination, but it is rare to see. The most popular example of this sub-genre in action is Natural Selection 2. However, with that being over eight years old, there is certainly a vacancy for a new FPS/RTS hybrid to enter the market.

Given the nature of Eximius: Seize the Frontline,  I think it’s best to review both its FPS and RTS mechanics separately. After all, it doesn’t matter how well these work together unless each are designed well in the first place.

The first-person shooter side of Eximius feels outdated at times. More specifically, it plays a lot like a mid-2000s shooter. The biggest contribution to this feel is the gunplay which lacks complexity as well as those finer details that I feel define a great FPS. 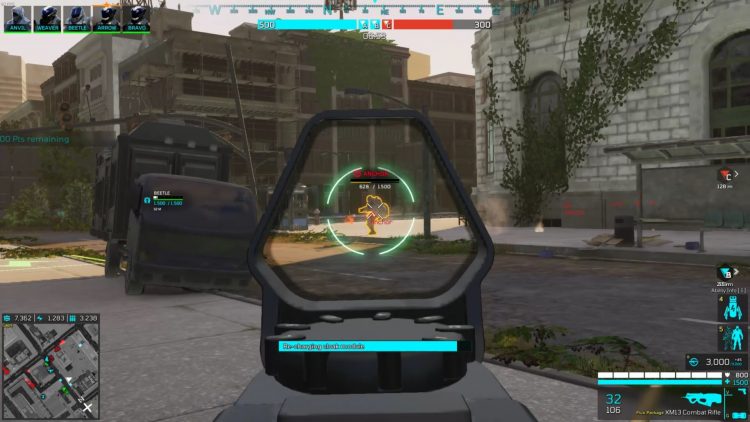 Perhaps AAA shooters like Modern Warfare have spoiled me, but Eximius: Seize the Frontline’s gunplay is bland in comparison. None of the weapons have any serious weight to them. The lack of an aim-down sights animation is particularly unsettling in a modern FPS game. The instant transition between hip fire and aim down sights doesn’t feel natural. To add to that, many weapons have unsatisfying random spray patterns and the gun audio is lackluster.

This is the reason why Eximius‘ weapons fail to differentiate themselves. If the rifle and a sub-machine gun both aim instantly, why bother using the harder-to-control, short-range SMG? That’s not to say I didn’t enjoy using any of the available weapons but it is a little disappointing to see how simplistic the gunplay is. Four of the five players on a team are reliant on this half of the game so I was expecting better. 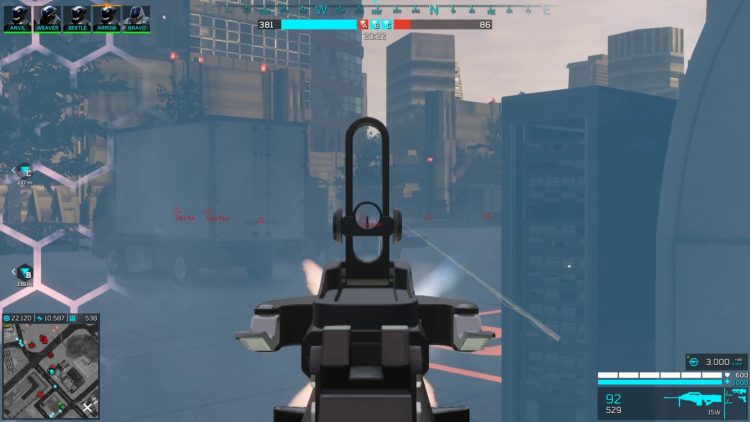 To Eximius‘ credit, it does get some things right. In many large-scale warfare games, it’s common for vehicles to be overwhelmingly strong. To this day I still have nightmares of how scary the attack helicopter was on Battlefield 4. Thankfully, the anti-tank weapons are more than enough to punish any overly aggressive commanders. Furthermore, there are some genuinely interesting weapons that I’ve not seen elsewhere. For example, the Shockwave is a pulse shotgun that can kill targets through walls. With good map knowledge and prediction, using this can result in some fun plays.

Even if the gunplay isn’t great same cannot be said for the battlesuit abilities. One battlesuit allows you to cloak into the enemy’s backline without being seen. From here it’s possible to scout, report back to your squad, and then have them engage more effectively thanks to your intel. Alternatively, an aggressive push onto an enemy objective can often backfire. But with a teammate deploying a shield to create space for their squad this play becomes viable. The way in which abilities interact with each other is akin to a hero shooter like Overwatch or Rainbow Six Siege. It’s a cool dynamic that promotes team play. That’s not necessarily something you’d expect to see in a real-time strategy game.

The strategy half of Eximius holds up better than the FPS alternative. Each team has one assigned commander who is responsible for the strategy aspects of each game. This includes ordering A.I troops around, calling in new units, and managing resources.

The commander can still partake in the FPS half of Eximius. However, when managing their team from the overworld map, their character will stand still completely undefended. You’ll need to either only use this screen when in your own base or get your teammates to cover you. The commander has the most impact on the outcome of a game. The victor of a game is usually determined by whatever team has the better commander. 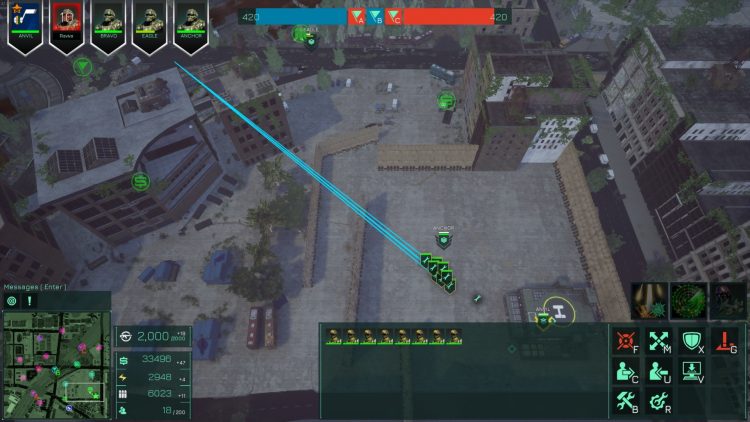 My favorite aspect of Eximius: Seize the Frontline is its sheer diversity of units. From flamethrower tanks to large-scale artillery, the commander has access to all kinds of units. Each unit excels in a certain role and needs to be utilized appropriately. To call units in, you need to build specific structures. These structures require resources that are passively gathered. Capturing resource points around the map speeds up how fast you can gather resources. Each team contests one another for resources, so it’s important to defend these points while also pushing the enemy’s objectives.

The aim of the commander is to accumulate resources, build units, and take objectives. The other four non-commanders are effectively treated as super units that can customize their loadouts to suit their team’s needs. If the opponent has a lot of tanks, a commander could get his teammates to buy launchers in order to avoid spending resources on anti-tank units. I can’t think of any other RTS games that require that level of communication and coordination between players. It’s an interesting mechanic that might even be a solid basis for Eximius to become a competitive game in the future. 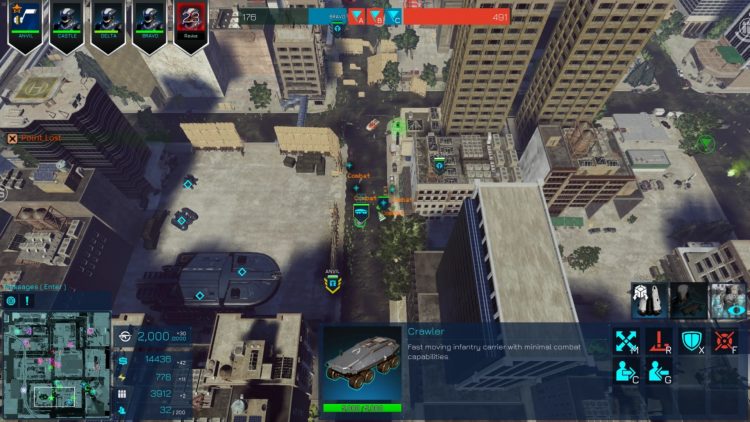 Speaking of communication, Eximius is at its best when you jump online and get a good squad. Having a commander who is willing to issue instructions makes playing both halves of the game more enjoyable. The way in which Eximius is balanced allows for both the commander and officers alike to have a big impact on the game. It’s possible to make up for a teammate’s weakness regardless of your assigned role but games are obviously more fun when everyone is capable and working together.

The single-player Skirmish mode is limited as the A.I isn’t overly interesting to play against. The CPU’s general intelligence has come a long way since beta but nothing can beat playing against a real team. Although as long as Eximius can maintain a decent enough player base I don’t see this being a problem.  I don’t think that the value of Eximius as an offline-only title is great so maintaining a player base is extremely important.

Regrettably, Eximius: Seize the Frontline is not the best example of optimization on the market. This was a problem in several of its Early Access builds, but I had expectations that this would be addressed for its full release. However, playing Eximius for this review has proven to me that its performance shortcoming are still a problem.

When playing at High or Ultra 1440p, Eximius suffers from stuttering and frame drops. Given that it only recommends a GTX 1070, I was confused why my RTX 2060 couldn’t handle it. It turns out that GPU usage can often hit 99% even when just navigating the menus. I’m not sure if this is a bug or oversight but it makes playing on higher graphics settings difficult. 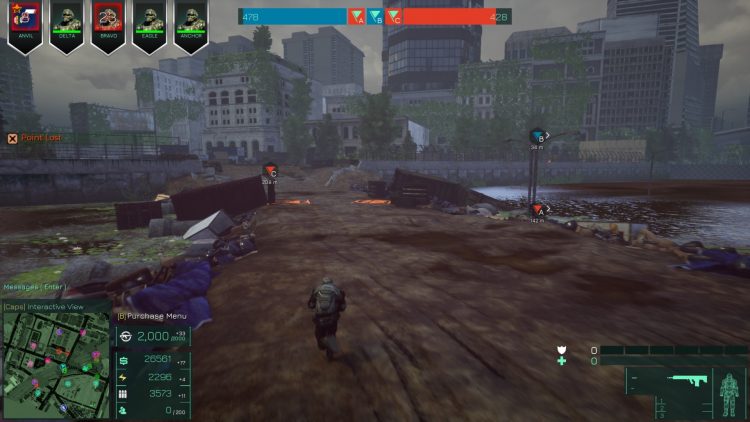 Lowering graphical settings and resolution helps mitigate this but it feels like a waste given that Eximius is a good-looking game. Even when I did drop my settings as low as I was comfortable with, the performance was still underwhelming. At low settings, 1440p, Eximius: Seize the Frontline managed a mostly consistent 60 frames per second. There were occasional dips as low as 35 FPS but these weren’t too common. Although not amazing by any standards, I’d consider that playable.

When dropping down to low settings, 1080p, the performance somewhat improved. At those settings, I managed around 75 frames per second with little to no drops. Therefore lowering settings can produce playable frame rates but gamers with older graphics cards should be wary of these performance concerns. There is no guarantee that some of the most popular, older GPUs such as the GTX 1060 or RX 580 are going to hold up.

Some work is needed

Thanks to the superior complexity and polish, the strategy half of Eximius is better than its FPS counterpart. In many ways, Eximius plays like a real-time strategy game with an FPS tacked-on to it. Playing as the commander is fun enough, but only two of ten players in a game fill that role. The other eight are stuck playing an average FPS that feels like it was made over a decade ago. Playing online alongside a good team does help off-set these flaws but it doesn’t change the fact that there are better FPS games on the market.

The aesthetic and creative decisions made are praiseworthy. When you consider the turmoil the developers have been through to get here, that alone is impressive. If you are looking to invest in an online-focused real-time strategy where teamwork reigns king, Eximius: Seize the Frontline is a decent enough option. Some aspects need work and the so-so optimization leaves a lot to be desired, but there is enough to enjoy assuming you can find some good squadmates. With continued support from the developer, Eximius could become a great game in the future.

Eximius: Seize the Frontline attempts to implement some interesting ideas and design concepts. However, a few technical problems hold back what could have been a great title. Even so, playing online with a good team and working together to grind out a win feels great. So as long as you aren't prioritizing the single-player experience, Eximius might be worth your time.

The best precision AX-50 build in Call of Duty: Warzone