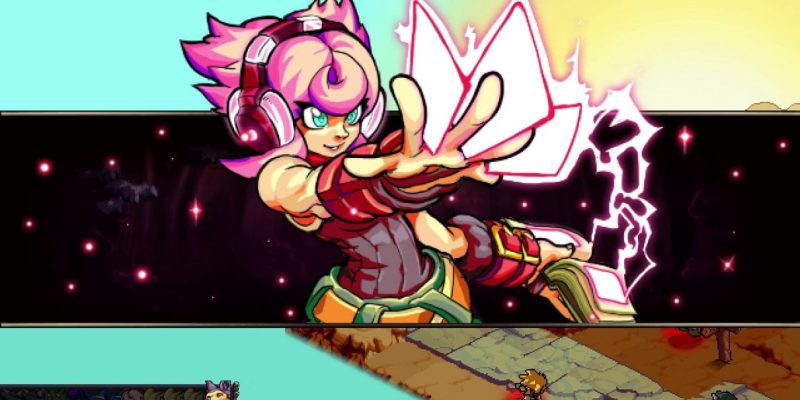 This year’s PC Gaming Show housed trailers for many indie titles, one of which caught my eye. That being Fae Tactics: The Girl Who Destroyed The World. I’m a fan of tactical role-playing games, and its cute art style and charming presentation had me interested. While those elements are still there in the final product, the rest of it, as competent as it may be, doesn’t do much to separate itself from its contemporaries.

The story of Fae Tactics is pretty standard fantasy fare. The world of humans and the fae, spirit-like creatures, collided many years ago which left both worlds shells of their former selves. Fae roam the world alongside humans, and an impending disaster is looming that threatens both.

You play as Peony, your stock starry-eyed, naive protagonist as she travels the land looking for her mother. Joining her is her dog Chico and her bird Payochin. Peony is a witch, which is very rare in this world. As such, witches are discriminated against and seen as signs of ill-fortune. Like with witches, Fae themselves are also a subject of scorn — thus making their cooperation almost preordained.

The story never digs into these subjects any deeper than surface level, though. None of the characters are written poorly, outside of their tropes. 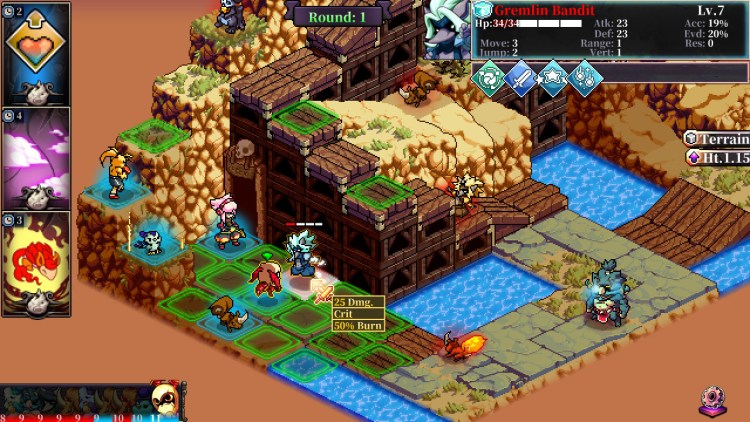 The art style in Fae Tactics is very cute and charming, full of whimsical creatures like trolls, gremlins, and the like. The charm wears off a bit when you realize that there isn’t much more to the art style than what first appears. Characters only seem to have one sprite and one piece of art that appears when they talk or perform actions. The lack of different facial expressions and voiceovers make the characters appear flat when they aren’t expressive and have the same facial expression no matter what.

On a moderately-sized screen, however, when the art is blown up, it gets very pixelated and rough. This wouldn’t be as much of an issue on a console like the Switch in handheld mode, but it really stands out on PC.

Sadly the music also suffers the same fate as the art. While all the tracks in the game are catchy and enjoyable to listen to, there aren’t that many of them. Hearing the same song over and over again, especially when traveling through the same area on a quest, can get very repetitive or even annoying depending on your tolerance. Again, just like with the art, there is nothing bad about it, there just isn’t much of it. 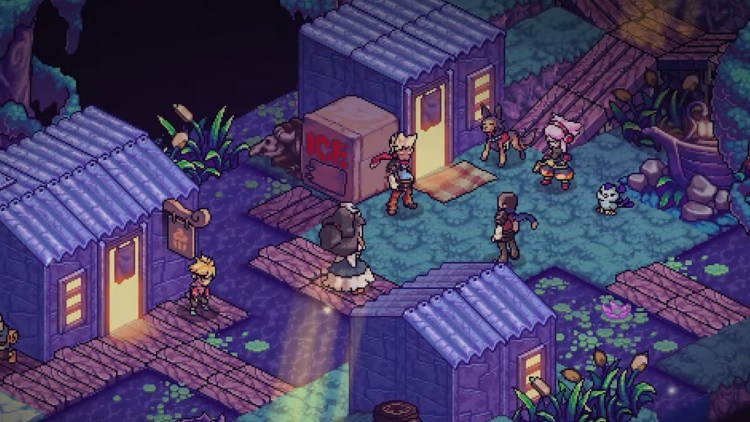 Tactics as you know them

This is a running theme through Fae Tactics and, unfortunately,  the gameplay doesn’t escape the same fate. You move your party on a grid-based map, attack enemies, and support allies. Attacking enemies from the side or from behind increases damage, and enemies can do the same to you. Some of the facets I really enjoyed about the game were the wait spells, assists, and the summon system. If a character only moves and performs no other action, or just stays still, they can use their “wait” ability. This can be anything from increasing their attack, protecting allies, and more. It creates an interesting layer of gameplay where you have to decide if it is worth forfeiting an attack or some other action to bide your time and set up a big play on your next turn.

Once your characters reach level 10 they can perform “ultra attacks.” Every action they perform or attack they receive fills up a meter, and when full, the character can unleash a more powerful attack or assist spell than they normally can. The problem with this is that, once your meter is full, you will always use your ultra no matter what. There is no option to save it and use it tactically. Sometimes you will need to assist an ally to remove them from a trap, or just heal them. Instead, Fae Tactics either forces your ultra on an ally you may not have wanted to use it on or causes you to lose your big attack for the next turn. 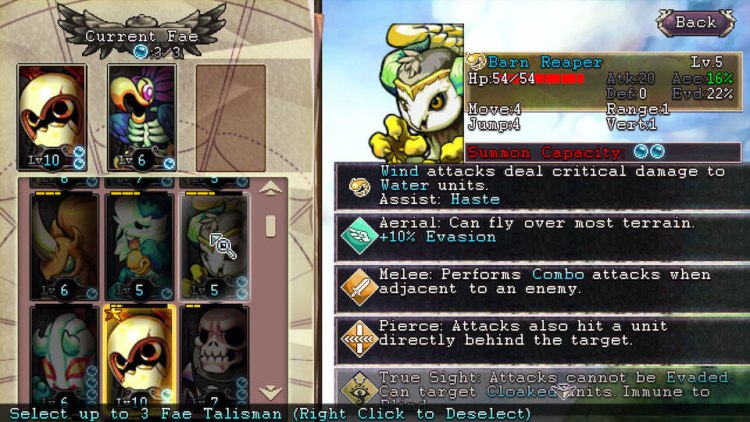 But I want to hang out with all my friends

Instead of attacking an enemy or waiting, you can also perform assist abilities on allies to power them up, regenerate health, and more. This adds another dynamic layer to the gameplay that encourages thoughtful consideration when moving your party and not just mindlessly attacking. Defeating enemies may sometimes drop talismans, which allow you to summon that particular enemy as an ally in your next battle. Your new ‘frenemies’ can be individually leveled up. Depending on the level, switching up your summon line up is an essential strategy to make the most of your actions. You can also perform one of three spells that are equipped before battle and items found on the field can be used to craft items that permanently increase your party’s stats and abilities.

Unfortunately, this is as close as Fae Tactics gets when it comes to unique and interesting mechanics. There are other issues that hold the game back from being more engaging and dynamic. As I said before, you can only have up to three members in your main party, not including summons. However, you do gather more party members as you progress through the game. I really wish that your new allies increased your overall party number instead of having to always leave one or more members out of a battle. In every battle in the game, you are usually wildly outnumbered. Battles often contain around twice the number of enemies, easily overwhelming your handful of allies. Your summoned reinforcements do little to even most odds. 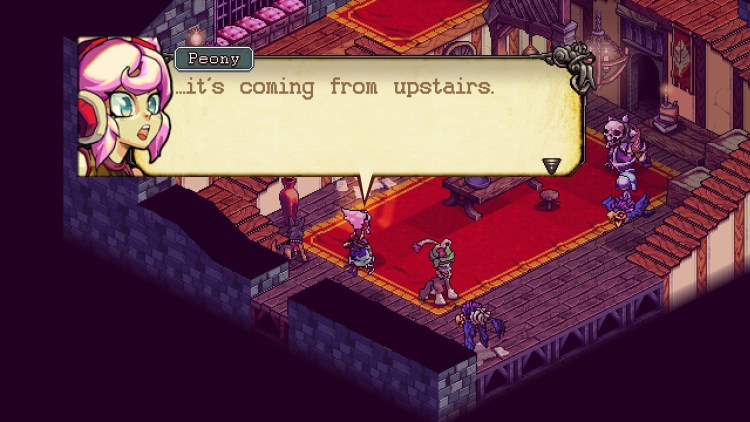 A little less yappening and a little more happening

It is very easy for you to become overwhelmed, but this high enemy count also slows down the flow of gameplay. There is an option to increase the battle speed once, from normal speed to 2x. This still doesn’t make battles as snappy as they should be when you are faced with so many enemies. For every minute you spend controlling your units, two are spent watching enemies move around the map and performing their actions. Which also brings into play another downside to the gameplay — the AI.

There are many battles in the game where you will lose if one of your NPC allies is defeated. When a leader character gets to 0 HP, they are downed. If they are hit three more times, the unit is defeated and cannot be revived. Because you are so outnumbered, it isn’t uncommon for the enemy AI to gang up on a fallen NPC and take them out as you hopelessly watch. Likewise, it also isn’t uncommon to have your NPC ally leave the safety of your group and put themselves in the middle of several strong enemies seemingly asking to be destroyed. A lot of battles can feel like they are less about managing your units than they are about babysitting the NPC, attempting to stop them from running into certain doom. Your actions are limited because of the number of enemies on screen, and you can feel like you’re just spinning your wheels and not progressing the battle. 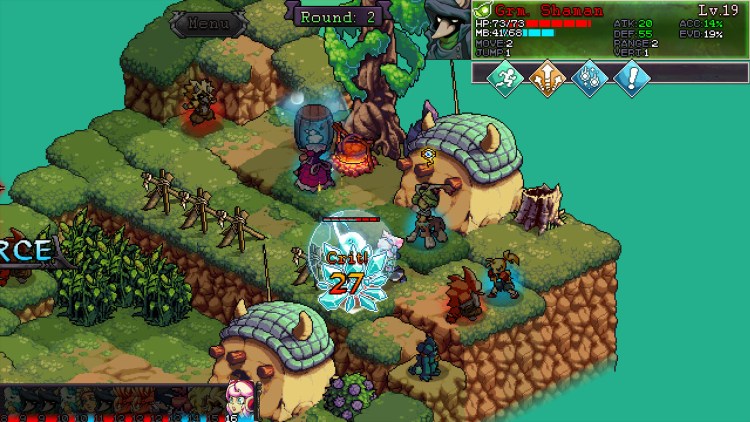 Fae Tactics is hardly a bad game, regardless of its faults. The developers at Endlessfluff Games clearly put a lot of time and care into it, and that shows. The game has a charming art style, fun characters, and an engaging battle system. Unfortunately, undercooked design decisions hold the game back from being as good as it could be, and it doesn’t really add anything new or exciting to the tactical role-playing genre.

If you are jonesing for an old fashioned, no-frills tactical RPG and have the patience for some of the game’s slower or more frustrating elements, Fae Tactics comes recommended. Just don’t go expecting a reinvention of the genre or anything particularly mind-blowing that you haven’t already seen or played before. The team at Endlessfluff Games definitely has talent, and I hope it gets another crack at making a game like this — or even a sequel. I would love to see what the team can come up with after a little more time and with some more experience under its belt.

Fae Tactics: The Girl Who Destroyed The World

A tactical RPG set in a realm where the worlds of humans and spirits known as Fae have merged, telling the story of a witch named Peony.
6.5

Fae Tactics is a game filled with one step forward and two steps back. While its art style and music are charming, they are very limited. Likewise, the gameplay is solid but holds itself back with a few odd design decisions. While not a bad game, it may not be enough to excite fans of the genre.