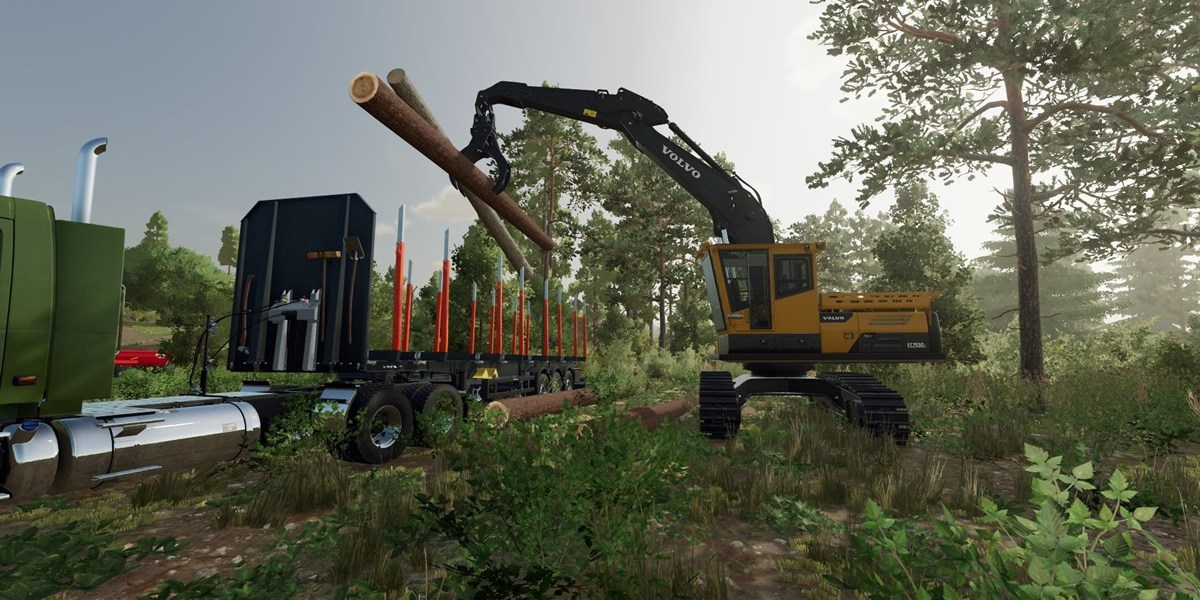 A year has passed since Giants Software first released Farming Simulator 22. Now, just in time for its one-year anniversary, the sim has gotten its first large expansion — the Platinum Edition. Following the series’ tradition of the first expansion introducing a new map with a major new theme, the Platinum release of Farming Simulator 22 keeps things consistent with its introduction of the Silverrun Forest map — and a renewed focus on forestry.

Forestry has been a part of the Farming Simulator gameplay mechanic roster for several years. However, this is the most attention its gotten. But while this is the expansion’s biggest strength, this is also its greatest weakness.

With the new settlement having “Forest” in the name, it should come as no surprise that it’s absolutely bountiful with trees as far as the eyes can see. The town is nestled in a small dip in the land. Forests can be seen looming above as they roll up and down the hillsides that surround it.

The hilly topography of Silverrun makes for an interesting challenge. You’ll often find yourself maneuvering your lumbering machinery (pun intended) through the thick shrubbery and sloping paths that are carved all over the hillsides. Forestry machines, however, are often on the larger side and don’t get up to speed very quickly. Patience and strategy are needed to safely guide machinery to different parts of the map. While handling logs, one must also be sure not to tip over when cutting them or loading them. That said, the machinery you start with is fairly capable of maneuvering around your small plot of owned land. You have access to a tree cutter from Komatsu, and a log loader and small tractor both made by Volvo. The latter two are quite small and old, so they don’t have much horsepower at all. But they get the job done for lighter loads.

You’re also granted a log winch to attach to the tractor, as well as a tree planter. The log winch is used to pull logs out of the forest to a more appropriate staging area for loading. This is one of the new forestry mechanics in the Platinum Expansion. Another new feature is log yarding, which involves transporting logs along a zipline to move them either uphill or downhill. The other new machines in Farming Simulator 22 – Platinum Edition include various wheel loaders, skid steers, log transporters, tree cutters, forest mulchers, and more. Logs can now be loaded into storage containers that to sell via train. Not to mention, so many of the businesses around Silverrun Forest are dedicated to the logging industry.

For instance, some of the production chains that can be purchased include a furniture store, old sawmill, and barrel factory. You can turn your logs into various other products such as prefab walls, planks, and a whole lot more. Overall, the entire pack is dedicated to forestry. And, as mentioned at the onset, this proves to be the Achilles’ heel.

Crawling out of the woodwork

For all of the attention that the Platinum Edition gives forestry, it must be noted that in order to really enjoy its contents, you’re either someone who must already love forestry-related work in Farming Simulator, or you’re just going to have to learn to love it.

Forestry work differs wildly from fieldwork or animal husbandry — which is admittedly great for variety. However, this comes with a few caveats. For one, unlike fieldwork, forestry is pretty much an all-manual array of tasks. Cutting trees, loading them onto a trailer, all of this must be done by the human player. While the NPC workers are (somewhat) capable of completing a round of field duties when it comes to traditional crops, the most you can get them to do for you here is drive an loaded trailer of logs over to a selling point and bring it back. This can save you a bit of time, as you can continue cutting trees during the transport task. However, it doesn’t change the fact that forestry work is remarkably time-consuming.

Just as handling a large field can be a mammoth task, so can trying to fell, cut, and load even just a few dozen trees. You have to constantly move machinery around as space in the forest is tight. Some machines also come as a combo (such as the starter log loader), so you’ll quickly find that using dedicated machines is at least subjectively the better option. Of course, this comes at a staggering cost. Unless you inflate your bank account with loans, it’ll take some time to accrue the funds to build a decent forestry fleet. This is especially the case considering that logs and other wood products aren’t as outright profitable the typical field crops.

So, overall, this entire setup requires more patience, strategy, and effort than a typical farming-dedicated map.

Do what you love, and call it work

Deciding whether or not to venture into the depths of Silverrun Forest are going to require you to really ask yourself if you’re up for the task of learning the ins and outs of forestry. Like with traditional field crops, there’s a strategy to discover with logs. Finding the right kind of trees and learning the best ways to quickly turn a profit with them are all left for you to learn on your own (unless you go ahead and look at guides).

It’s certainly great to have more light being shown on forestry. However, the full-on dedication to it with this expansion will no doubt alienate some people.

If you haven’t cared for forestry up until this point, then you’re better off just sticking to either dabbling in it with the sim’s included base maps, or continuing ignore that the feature is even there. There are only three fields in all of Silverrun Forest for regular crops. 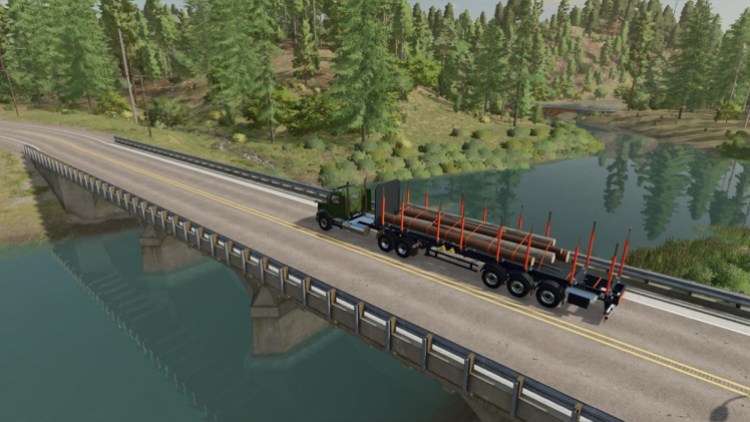 While the fields big, they are all on top of land that must first be purchased before you can even work on them. So, again, you still have to generate funds through forestry work first in order to even have the privilege of buying these fields (and the equipment needed) to work on them. It’s certainly a great strategy, as it will allow you to introduce new revenue streams. But the hill you have to climb to get to that point is demanding.

This all leaves me to feel similarly to how I felt with the Alpine Expansion that came to Farming Simulator 19. Its map of Erlengrat was a beautiful countryside vista, with gameplay almost entirely dedicated to animal husbandry. The balance there also felt off, as it treated farming as more of a neat extra than the main focus. The same conclusion can be drawn here with Silverrun Forest. It’s unbalanced by design, and that can either make it or break it for you. 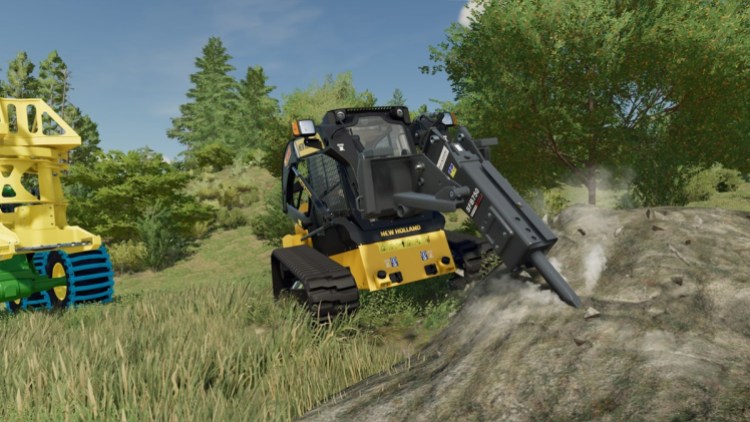 Ironically, Erlengrat is one of the included maps in the standard version of Farming Simulator 22. Thus, the same may very well end up happening again if Silverrun Forest is included as a starter map in the next release of the series. This means that, if you’re on the fence, you don’t have to necessarily buy this expansion to experience it — if you’re willing to be patient, that is.

Nevertheless, this expansion is a good change of pace from the traditional slog of fieldwork. While Farming Simulator‘s wonky physics system continues to rear its slightly unpolished head as it relates to vehicles still feeling a bit too floaty and a little clunky, at least all of the crane mechanics are pretty decent.

With practice, cutting logs, moving them around, grabbing and then loading them onto a trailer can become a solid rhythm.