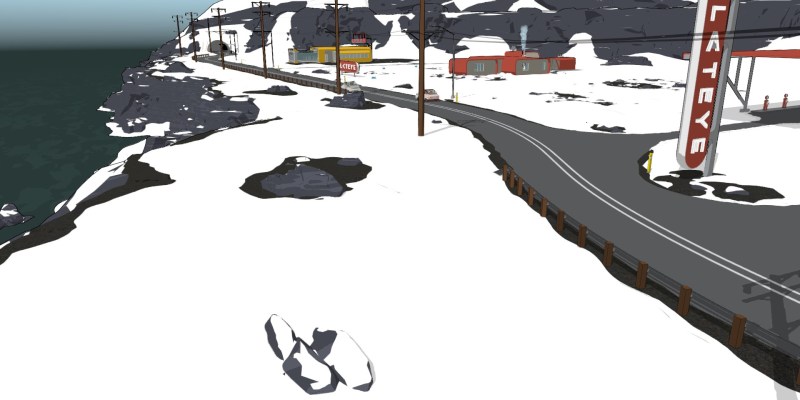 After watching a slow-moving workplace suspense thriller earlier this year, I’ve been looking for that feeling of dread and corporate fear in almost every form of media. While it isn’t the surrealist horror I was expecting, Flat Eye finally gave me that feeling back. It takes the downfalls of technology on humanity and our desire to advance and creates a pseudo-mundane management sim.

So you work for Eyelife and have to manage its Flat Eye Station. You control and order around the clerk of your hire to keep the gas station running smoothly. But from the “tutorial” screen, which played more as a sinister corp employee introduction, it’s clear being a gas station manager isn’t all that job requires.

All in a day’s work

Flat Eye has a Sims-like gameplay flow. You click on objects or people and choose from a small menu of actions. As your clerk moves around the station accomplishing these tasks, a flow bar appears at the bottom of the UI to keep track of what they need to do.

As a manager, you don’t just order the station clerk around — their success is your success. There’s even a mandatory “luck system” that sets very realistic but hard-to-attain goals for each day. You can even gain tech points that allow you to acquire more modules, which boost your station. As you gain the trust of EyeLife’s AI, you unlock the potential for more modules. Failing doesn’t feel like an option despite where your morality may lie. 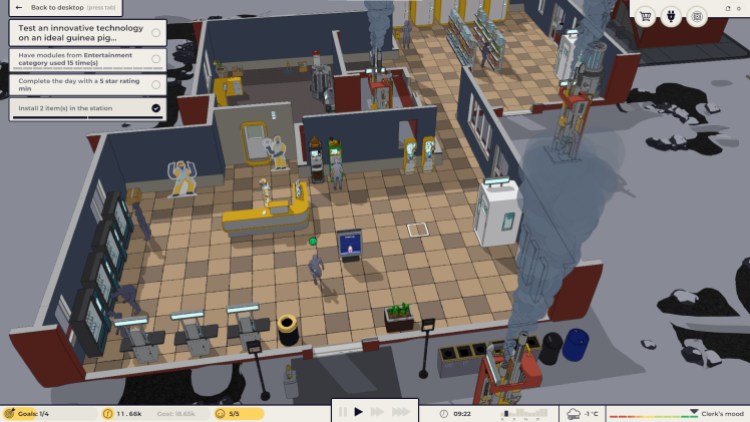 Frankly, Flat Eye is rather simplistic in terms of the actual management gameplay. It doesn’t go as deep into shop and customer upkeep as other games do. You do still manage station modules and a power/resource grid, but that’s all easy to navigate. With a lot of the focus on the narrative, the gameplay, even when hectic, doesn’t feel too full or convoluted. You can easily maintain a shop and pick up the bits of narrative that come throughout the day. As far as the story of the game goes, it’s told in multiple forms.

You have a desktop where you can read transcripts, chat with other managers or supervisors, and run your station from a more hands-off approach (all while watching your station clerk through a hidden camera). Through all of these communications, it becomes clear that despite Eyelife’s employee-first attitude, the main goal of the company is to own and control. Early on, you get a message from the CEO about open communication and how great the company is only for the conversation to end with a notification that “ALL INCOMING MESSAGES BLOCKED BY USER.” 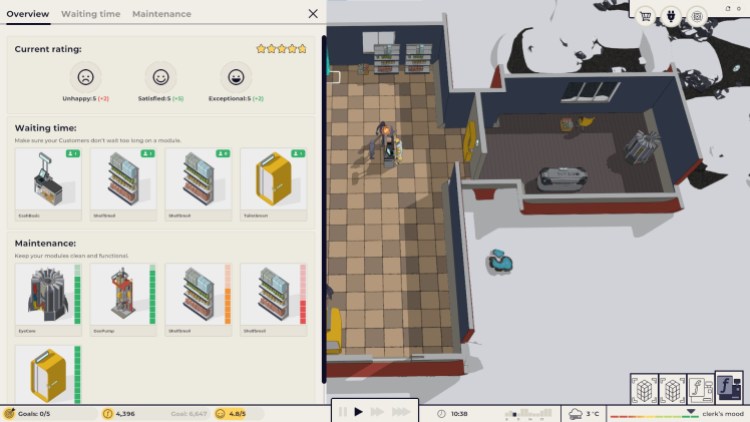 Conversations with other managers feel similarly nefarious. I enjoyed the process of slowly learning more about the company and my role in it, so I won’t say much more. But your role in the game is that of someone who exerts the same oppression that is placed on you. In the chain of command, you fall in the middle and have to decide how far you want to go in your managerial duties.

The most interesting aspect of Flat Eye’s storytelling comes from the premium customers. They’re NPCs that have their own lives, personalities, backstories, and opinions on the way humanity is using technology. Some premium customers seem pretty innocuous, while others are determined to get their point across.

As you add more modules to the station, premium customers will come in to comment on them and the surrounding world. Talking with them could have multiple results based on how you have your clerk interact with them. An early encounter came after I installed a toilet in my station that collected bio-data from customers. That brought out a customer who really challenged my customer service (and by default me and the company AI) on the state of the world and the lack of autonomy and knowledge we really have. 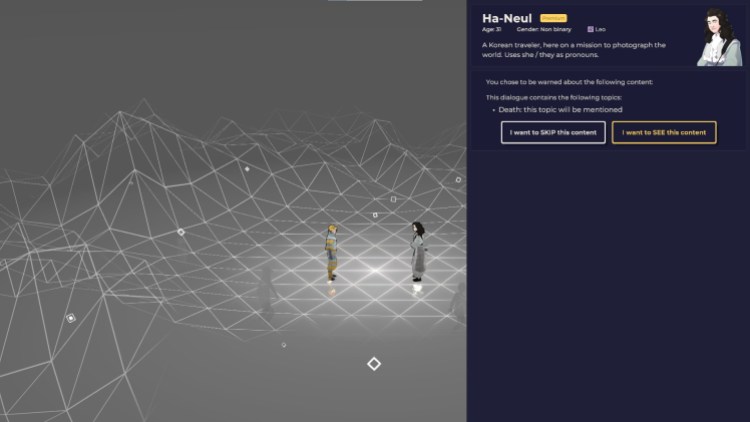 Flat Eye may be a game about sinister technology, but its developers still respect the people playing the game. Naturally, a game like this is going to try and approach serious topics related to human autonomy, fear, pain, and death. Along with a warning on the Flat Eye’s Steam page, a pretty detailed content warning system is included in the game.

You can customize how many warnings you want to get for specific triggers. I played with all content warnings enabled, and without any to provide a gauge of how responsible the game is when handling triggers. I obviously can’t say how anyone other than me will respond, but the warning system is great. There’s a very clear warning about what the content will contain and gives you the choice to see it or skip it. You also have the chance to skip content while in it. It’s in the details, really. 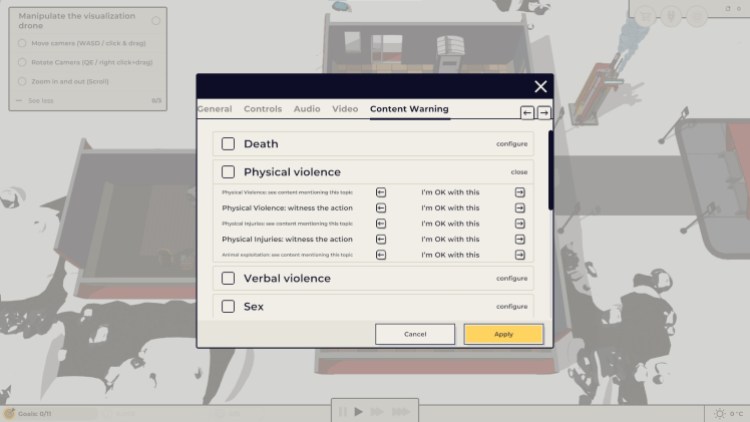 Speculative fiction, even when slightly terrifying, is fun. Unfortunately, oftentimes when it’s technology-based it veers into unrealistic soapboxing. Discussions on how dangerous technology can be have been happening for years at this point and they feel cartoonish in the way they try to create this fear of the unknown future. Flat Eye focusing on technology at a corporate level is what makes it feel grounded and fresh.

Despite some of the extremes the game goes to, a lot of the big-picture stuff feels close to home. In the eyes of a mega-rich CEO, we’re all the same, and we’re all disposable. Instead of feeling like there was a lesson at every turn, Flat Eye portrays multiple sides of the same dystopian dice.

With a subtle art style and in-depth narrative, Flat Eye manages to tell a dystopian story without feeling preachy. While it is a management sim, you won’t find this game as mechanically full or complicated as others in the genre.