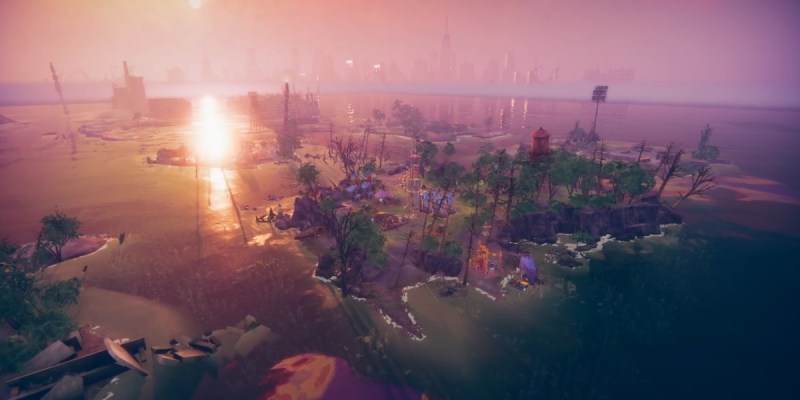 I really wanted to like Floodland. The colony management/city-building sim from Vile Monarch and Ravenscourt seemed right up my alley. With post-apocalyptic themes centered on climate change and humanity’s struggle to survive on a harsh world, it was too good to pass up.

Then, I played it, and part of me started wondering if this was still an Early Access game. True, there were interesting mechanics and familiar concepts. However, there were also confusing moments, unclear information, and an odd lack of a pure sandbox mode.

Floodland is set in the near future. Humanity has failed to counteract climate change and, as such, most of the known world has been submerged under the waves. Pockets of survivors have banded together, and you can select your clan at the start. While they all play similarly, they do have their own unique bonuses that affect certain facets. For instance, the Good Neighbors have a bonus to water filter production, and they can enable night shift so that people can continuously work at odd hours. Berkut-3, meanwhile, has an extra Precision specialization, as well as faster searching and collection when exploring ruins.

As with most new games that I review, I tend to try the prologue with tutorials enabled just to understand the mechanics and see what feels familiar. Right off the bat, I liked how Floodland has search actions that let your survivors pick up all types of resources, as well as upgradable buildings that only gather particular materials. Likewise, it’s as though I need not care about each individual’s needs, as the ideas of happiness/unrest and resource availability are viewed collectively. 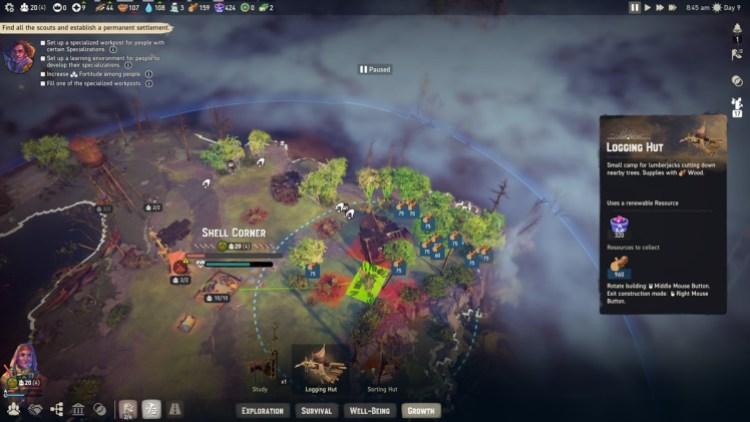 From there, I received a mission to check a radio tower and send out a transmission. This revealed a nearby island with more survivors. Now, it was time to send out an expedition, which was also when things started to fall apart. For reference, the action to send out an expedition can be seen from the radio tower’s tab. I had completely forgotten about this, at the time, when the new objective appeared. As such, I spent half an hour looking for the right tech or building that would somehow let me reach it. The tooltips didn’t provide the necessary information either.

That’s on me. Still, there were certain instances in Floodland where I genuinely did not know what was going on, or what had caused issues. Here are some examples: 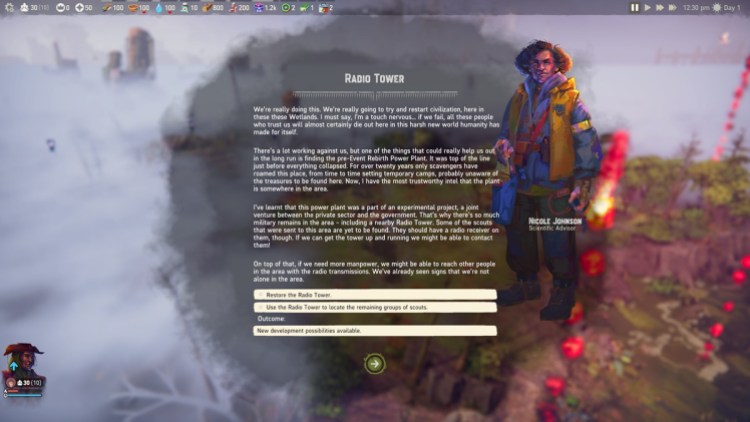 Did I just mess up?

Perhaps one of the most glaring mishaps I encountered early on was right after finding that new group of survivors. I was told that I could return back to the main island, or create a colony by upgrading the storage building/camp there. Expanding seemed like a good idea, and I had the tools for it. Little did I know that it would prevent that second group from being transferred. Had I simply packed up to go home, I would’ve had 45 citizens easily.

Then again, I did attempt to check if I could continue onward. That meant researching additional techs to connect island districts, gathering more resources, and building a couple of piers. But, I noticed one more tech — “Stilt Platform” — that said it could be used to connect districts.

It was the cheaper option, so I started plopping down wooden platforms above the water. Surprisingly, the remaining tiles became red, like something was preventing me from building more of those objects even though I had the resources. I can’t tell if I was supposed to clear sunken rubble (which required advanced tech) or if it was a placement issue. 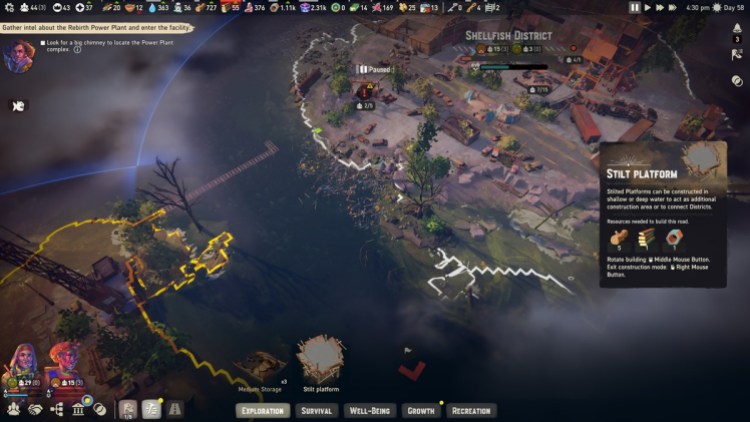 Speaking of techs, Floodland has dozens that can be researched via four branches: Growth, Survival, Exploration, and Well-being. The idea of “teching up” is common in management sims, so I gave this a shot. I prioritized options that increased resource gains and material conversion. Then, I noticed that I wasn’t earning any research points. I knew I ran out of “Old World Relics,” the item needed to gain points. Sadly, all the nearby ruins were devoid of this currency, too.

I had to switch my research buildings to “Academic Debate” mode, which provided points at a very slow rate. Needless to say, I was annoyed at the idea that tech progress could get curbed. If you make poor choices, you’re practically burdened with an unnecessary bottleneck.

I should also cite that some techs didn’t really make sense given the setting. Remember, this is set during modern times, and yet people still have to learn how to create hacksaws, sledgehammers, scaffoldings, and dirt paths. 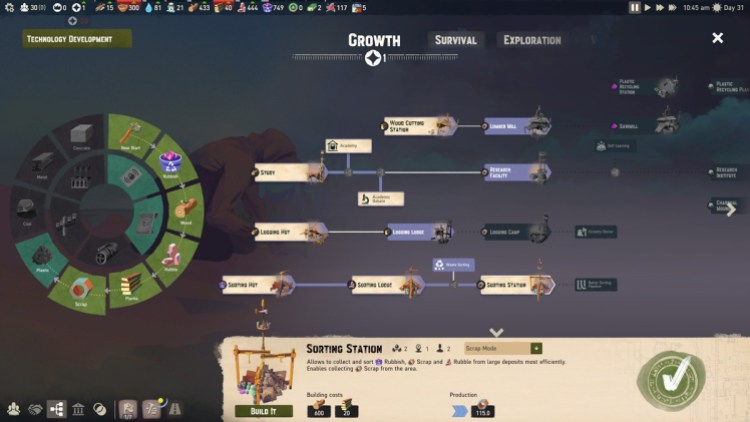 Two more issues became noticeable as I played Floodland. The first was how there’s no clear indicator regarding the reaction of other clans to the decisions you make. It’s as though entire groups would get pissed off by everything from timely speeches based on the laws you’ve passed to finding a doll in a ruined house.

The second is the utter lack of a pure sandbox mode and limited world/seed settings. It’s akin to Frostpunk‘s campaign presentation, yet significantly less engaging. Given the above mishaps I encountered, I restarted a few times just to do an ideal run. I was genuinely shocked when the same missions followed a sequence — i.e., upgrade the radio tower -> send an expedition to find survivors -> contain an epidemic -> pass laws and have recreational facilities -> watch out for monster fish -> send an expedition to find the power plant, and so on.

In these moments, I looked for additional options, outside of changing the difficulty, such as increasing the number of survivors, modifying the size of the first landmass, adjusting shallow and deep water levels, and the like. Unfortunately, these did not exist. As such, it felt as if I was redoing the same runs over and over with little to no variation.

In any case, I’ll continue progressing further in Floodland. While my first impressions are certainly far from positive, I’m hoping that things become more interesting down the line. You can expect our finalized review score by the end of the week. 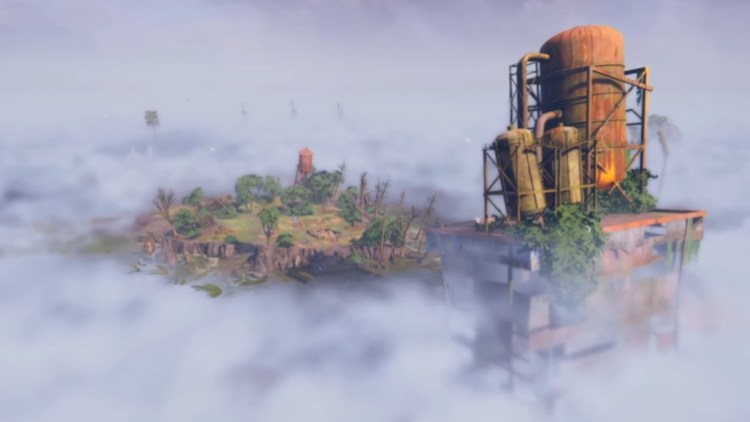 By Dani Maddox6 hours ago
Reviews

By Daniel Pinheiro7 hours ago
Reviews