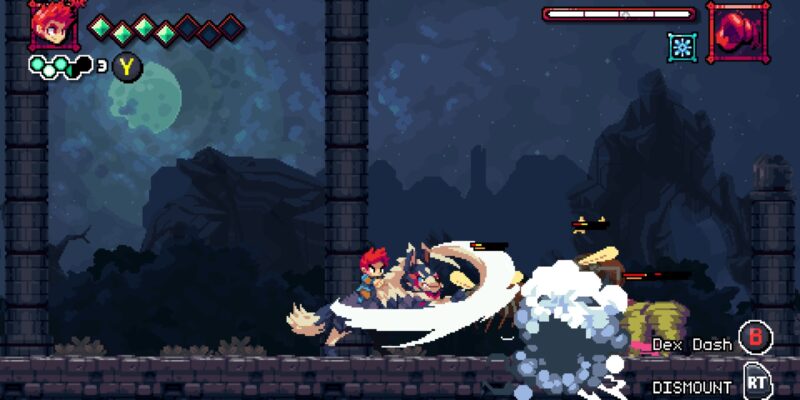 Flynn: Son of Crimson raised over $60,000 USD on Kickstarter before being picked up for distribution by Humble Games. We all love a good success story, but that also, of course, depends on the final game. This one isn’t going to blow anyone’s mind, as it’s short and familiar for fans of 2D action platformers. What does set it apart is the high standard of quality in its controls and level design. The game doesn’t have an ounce of fat, doesn’t like to repeat itself, and has an expertly honed difficulty curve on top of everything. All-in-all, this is a worthy little title that will satisfy those seeking a short, but potent, adventure.

The game has a fair bit of backstory, some of which I gleaned from its Kickstarter page. Flynn is the son of the Goddess Sorrell and a human man. Sorrell is from another dimension and ended up sneaking over against the wishes of her comrade Zealock, who despises the humans and wishes to subjugate and destroy them. He attempts to do so, but Sorrell and her beloved sacrifice themselves to kick him and his kind back to whence they came. But he’s making new incursions and threatening to begin his invasion anew.

It’s up to the player as Flynn to stop his dastardly plans dead in their tracks. Despite all that, there isn’t much narrative here, although the dialogue is up to the task and occasionally funny, depending on what character you’re interacting with. The pixel artwork is strong and does a good job of making Flynn: Son of Crimson‘s areas all feel different. The game takes about five to six hours to get through if you stick to the story, but there are challenge areas you can find for extra currency by locating alternative exits to some levels. 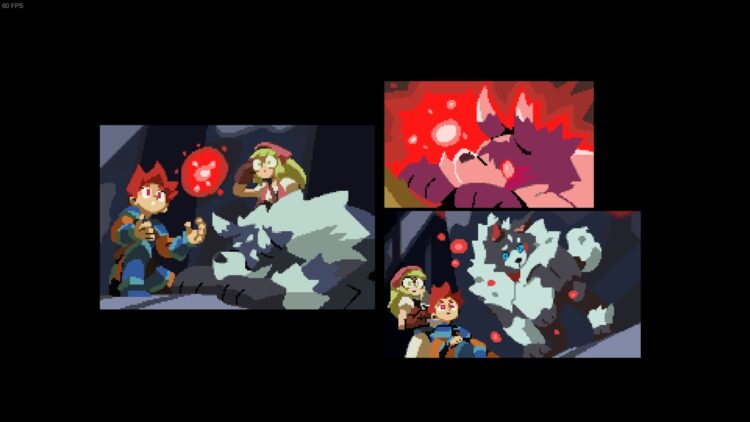 To the next ordeal

Speaking of which, if you were hoping this was a Metroid-like as I was, you might be disheartened to learn that Flynn: Son of Crimson is very much a level-based affair. Flynn does acquire new abilities that allow him to return to a few previous locations to progress when he couldn’t before, but don’t expect to find the levels littered with alternate pathways that open up as you strengthen your character. The focus is here is on tight combat and responsive navigation. Oh, and boss battles, of which there are several, although you’ll be fighting one of them more than once.

You choose levels from a map. Completing a level is ultimately achieved by interacting with a statue of Sorrell at the end, unlocking the next map node. Some nodes lead to separate map sections entirely. The levels themselves are simple side-scrolling affairs where you typically move Flynn to the right, dodging obstacles and battling enemies along the way. At first, Flynn has only a simple wooden sword before finding the crimson sword. Beating successive bosses earn him a crimson ax and crimson claws as well. The two former weapons are slower, while the claws are speedy and have an air combo, which the others lack.

Flynn also has magic, which he can shoot normally for minor damage, or that can be charged to unleash special effects. These are crimson energy, ice, electricity, and fire. Ice can freeze enemies as well as certain spots containing water, electricity somehow de-electrifies shock enemies, and fire can light torches and burn foes. Flynn can also dodge roll, which has a noticeable cooldown to keep players from spamming it. Enemies flash briefly to signify that they’re about to strike and your dodge has plenty of i-frames. 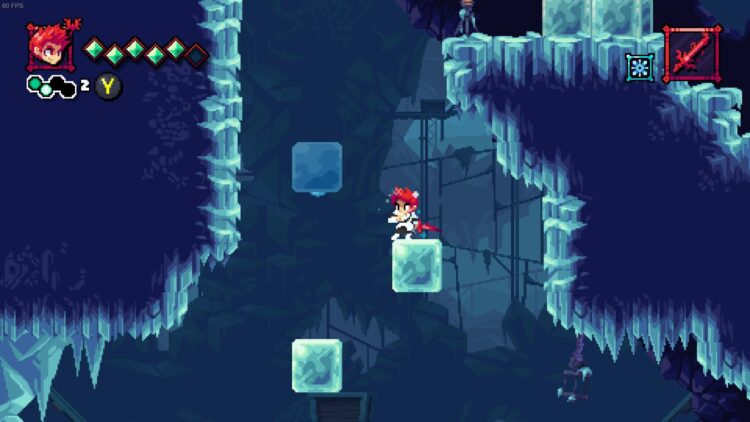 Let me ax you something

There’s a surprising amount of variety in the level design here. There are some auto-scroll levels, others that are focused on combat, some that are platforming-heavy, underwater levels, and dark levels. While moving forward, each level locks and Flynn has to head into a scourged version of the level. This changes things up so much that I never recognized the scourged versions. Several of these feature a giant floating green ax that follows you. Your goal here is always to get to the end of the level and destroy a glowing orb that eliminates the threat.

As you explore the levels in Flynn: Son of Crimson, you’ll come across red and green crystals that can be broken. Red crystals give you red gems, the game’s currency. Green ones refill your healing items in small or large amounts, depending on the crystal. It takes several small ones to give you a single healing charge, but only one large one. Red gems can be spent on upgrades from Loretta, the game’s skill trainer. These add new attacks, more health and healing charges, as well as modifications for the game’s “rage mode,” which you can unleash after filling up a meter. Rage mode gives you increased speed and damage for a little bit. There are also golden trinkets hidden in the levels that can be sold to a collector in the same town as Loretta for a cool 1,000 red gems.

Honestly, I don’t have much negative to say about Flynn: Son of Crimson. The combat is fairly simple, I suppose, and it can be difficult to tell that an enemy is flashing if Flynn’s sprite is obscuring them. I did have trouble in one or two of the dark areas, simply because they were so dark I couldn’t see. I also almost completely stopped using the sword and ax once I got the claws, as they really outclass them. Also, the bosses are neat, but they’re mostly on the easy side. None of them took more than two tries. Yes, the game is short, but I feel like it’s as long as it needs to be, so I have no issue with that. 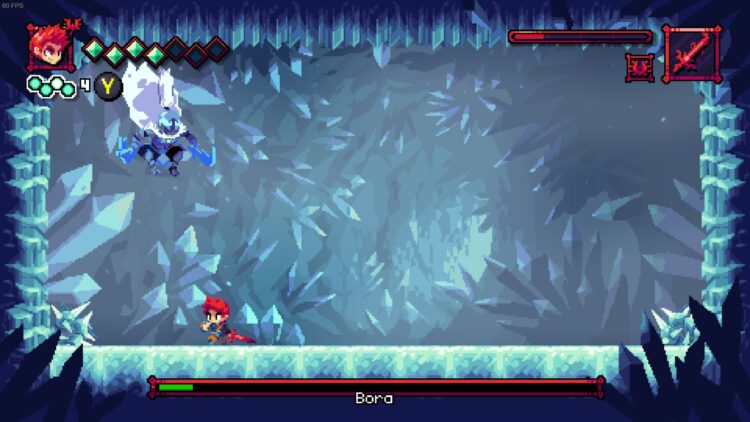 Flynn: Son of Crimson might not break much new ground, but I had a rather good time playing it. The controls and level design are both top-notch and I loved the amount of variety in the levels. I also liked riding Dex, Flynn’s guardian dog companion. I wish Dex had shown up a bit more, as summoning them at statues and riding them throughout the rest of a level was a nice change of pace, but that’s a minor nitpick more than anything else. If you’re looking for a polished, engaging 2D action-platformer, you can’t go wrong with this one.

Short, but without an ounce of fat, Flynn: Son of Crimson is well worth a playthrough due to its excellent controls and great level design.