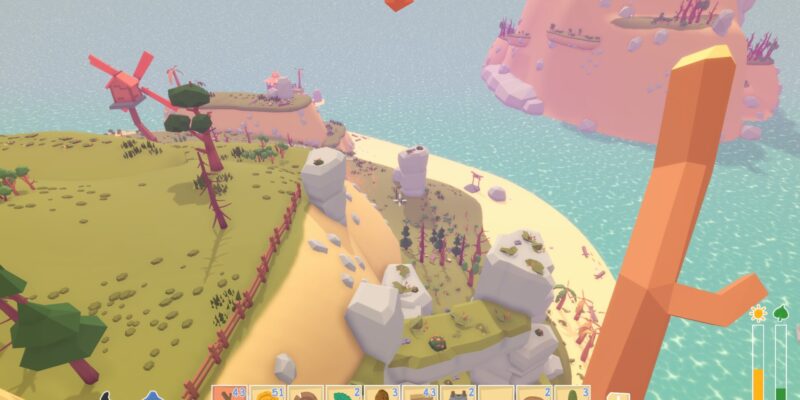 It really is quite enticing when a game asks if you’d like to move to an island where your main goals are to explore and decorate things. Gardenia does things differently than most due to its adoration of verticality and silly hijinks, but it definitely hits on some of the same beats as games like Animal Crossing. It has some issues with signposting, and can be a little too obtuse for its own good, but the island its set on is a good place to spend several hours, provided you like gliding through the air, harvesting resources, and gardening.

Gardenia begins with a brief tutorial before bidding you to take a hot air balloon to the titular island. There you meet Wood Grandpa, an ancient tree with the goal of achieving immortality. He immediately sends you off to go randomly find him some money so he can save up for an immortality elixir. I mean, he’s a tree. He can’t exactly walk around. But not all is peaceful on the island. Someone is littering! It’s up to you to keep the island clean, find out just who is responsible for leaving armor and weapons everywhere, and eat a lot of weird mushrooms. I mentioned the talking tree, right?

Honestly, this game is pretty funny. The dialogue and characters are irreverent and just kind of doofy in a way that had me guffawing. One of the characters is a lady bear with an anger problem. When you first meet her, she beats the crap out of you for no reason. Also, her name is Kimbearly. You’ll meet other characters, such as Foxy, a fox that used to be a secret agent, and Mr. C., a lizard that is definitely not named after the Twin Peaks character. 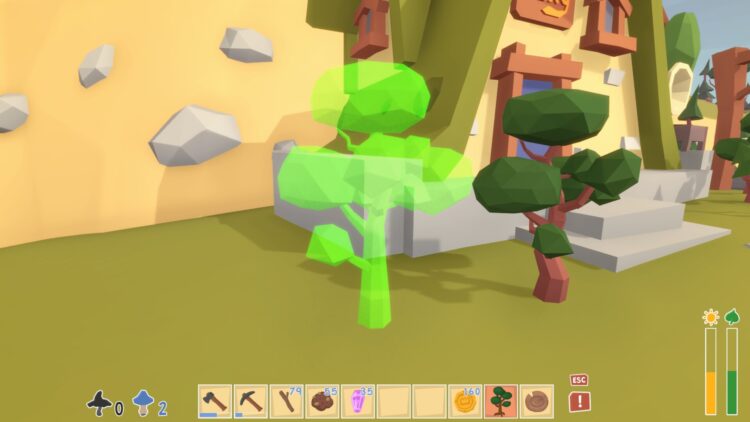 This search goes on

Gardenia has a lot of unique ideas when it comes to doing standard things. There’s technically a day-night cycle, but it’s handled totally different than what I’ve seen before. Instead of being on a timer, it’s tied to your energy. Picking things up, putting things down, chopping trees, mining — these all use energy. Each day starts at the break of dawn and only progresses as your energy is used up. Once almost all of your energy is used up, it becomes night. Conversely, you can run and jump around without interacting with anything indefinitely. I wish I had this power.

For most of the game, waking up is met with information on the garbage quest. Every day, new bits of garbage pop up on the island, causing damage to the plants nearby. Your job is to go pick it all up. If you don’t, it remains until you get it, and you really don’t want to let it pile up. Your main goal is to stop the garbage from being produced, so you’ll need to follow Gardenia‘s questline. As you do quests, a few more inhabitants move to the island, offering more quests.

Sometimes they’ll have you plant things for them, or bring them materials. I wish there were more gardening quests. I was expecting there to be a fair amount of them, but there’s really just one or two, which I find baffling. The biggest issue with Gardenia is that it can be quite difficult to know how to move the story forward. At one point, unlocking a mandatory progression quest required me to buy a recipe for an item, craft it, and then gift it to a specific character. Another quest requires players to find three hidden items scattered around the map. If you aren’t able to find them, you’re just stuck until you happen to stumble upon them, or look up their locations. 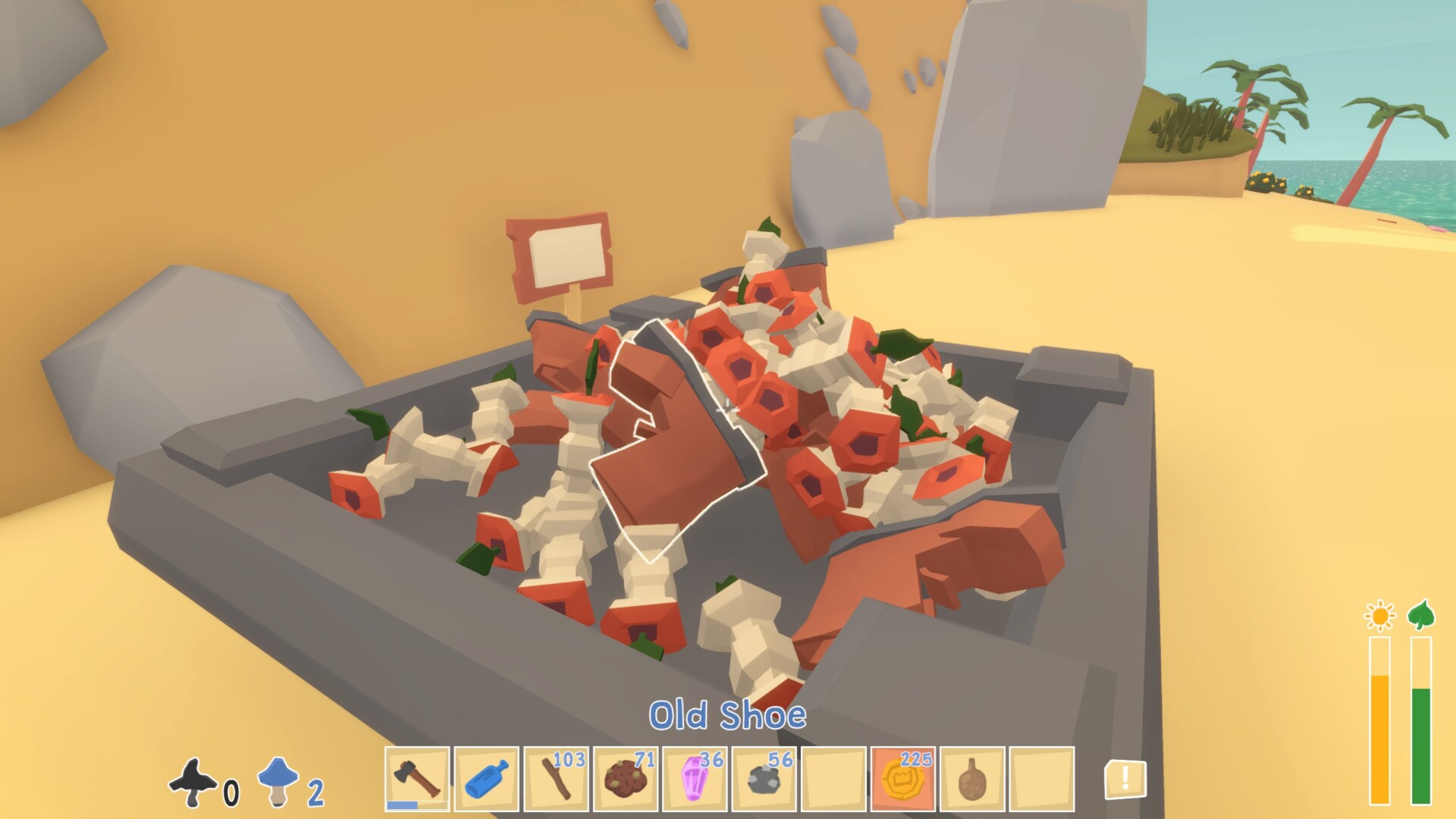 That’s really the main thing that rankled me in Gardenia. Granted, exploring the island is quite fun for a while. It’s far from large, but it has a decent amount to it considering the game’s scope. As you explore, you’ll find blue and black mushrooms. Each blue mushroom gives you an extra jump, while black lets you glide forward. Once you find most of them, you’ll basically be flying all over the island, which makes it feel a lot smaller as the game goes on.

There are treasure chests to find, and gnomes to put around your home for an optional quest. Chests mostly have money in them, but money is fairly useless in Gardenia, and there isn’t much to spend it on. Completing the gnome quest also has a very disappointing reward. You can actually craft the reward yourself, so it’s not even unique. Speaking of crafting, the game has an interesting approach to that as well. There are grey pallets around the island that you’ll have to place ingredients on. Once you have most of what you need, you drop a pink magic crystal on top, and poof, the item is crafted.

Endearingly, this is also how you sell items. Drop them on the pallet, then drop a single coin, and everything turns into its coin value. It’s kind of ingenious. Of course, crafting has some issues. Your recipe list doesn’t tell you what any crafting components are, and if you’ve never found them before, you’ll have no idea what you’re looking at. Some of the components are extremely rare, so this issue cropped up more than once for me. Need a skystone? Better break open dozens of snail shells. How are you supposed to know that? Good question! This has a simple fix, though. The game could have made it so mousing over the components would provide descriptions and info on where to find the items. 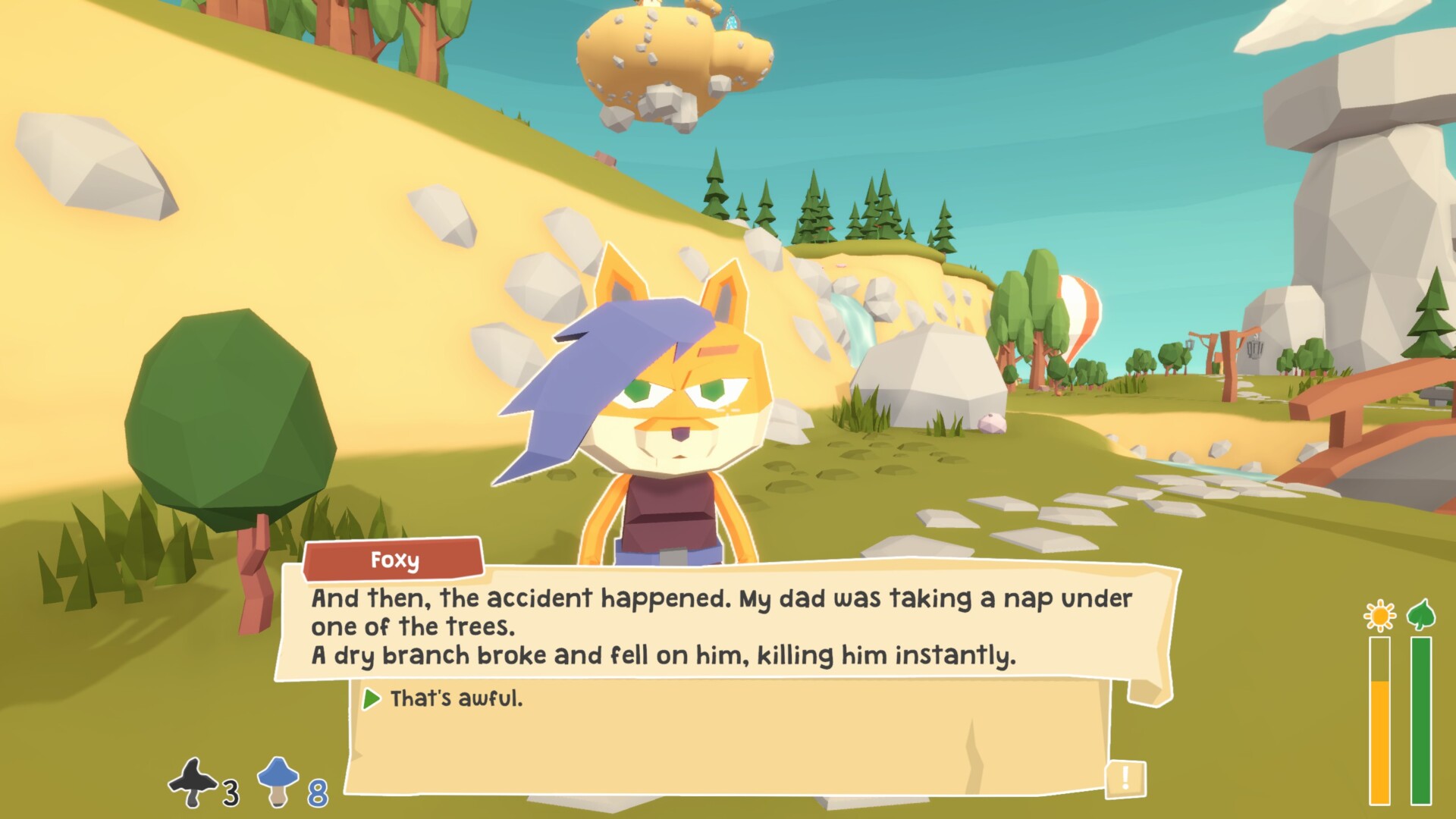 Once you get through the story, all there is to do is craft, harvest, and garden. This is a game I’d mostly recommend to people who like decorating. You can plant trees and bushes, as well as make stone pathways, but there isn’t a ton to it. Gardenia took me about six hours to see everything, but I don’t care for decorating, so how much that’ll add will depend on you. I liked the game overall, but I think a bit more polish in the quests and crafting would make for a better experience. Also, some gardening quests would really be nice.

Cute and mostly entertaining, Gardenia needs better signposting and could have made better use of the gardening aspect.