Gas Guzzlers: Combat Carnage opens with a structural decision so strange that it forms the peak of a dramatically inverse difficulty curve, and casts its influence over the entire first third of the game. As you can no doubt ascertain from the name, and the images dotted around this piece, is a cars ‘n cannons affair, harking back to games like Bullfrog’s Hi-Octane or Vision’s Roadkill; titles which rely on the triple thrills of speed, violence and deadly weapons.

Odd, then, for the first level of Gas Guzzlers to stick you in a hopeless, chugging banger, bereft of any weaponry, with the expectation that you’ll win a basic race against opponents in superior vehicles. Until you obtain a top-three finish on this track, everything (and I do mean everything) is locked away from you. No other cars, no upgrades, no weapons, no nothing. Just this one race, your awful car and the surprisingly arduous task of besting at least five of the seven opposition drivers.

Thank god for being able to switch the selected difficulty level on the fly, because without this ability I may have still been playing that very first race and lining up to give this game the lowest score possible.

Once you overcome that initial hurdle (strange, given the nature of the title, that you can’t simply bulldoze through it), matters do improve. Slowly. After you find triumph in the initial race, Gas Guzzlerssettles into the default structural routine that it persists with until the end of the game.

At any given time, three different race styles will be open to you. There’s the bog-standard race (a pretty boring option, given the alternatives), a battle race in which weapons are permitted, and a special ‘knockout’ race where the slowest participant on each lap is eliminated until only one car remains. Success in each of these race types will earn you money to spend on car upgrades like improved brakes and extra ammo (or an entirely new vehicle), and propel you up the driver rankings.

When you reach the top rank, you’re able to ‘buy in’ to a special three-race tournament (one of each type) that you must win to progress to the next ‘tier’. There, you’ll find new cars, new tracks and a new set of drivers to overcome.

The problem is, all of the new cars in the first racing tier are pretty rubbish. Acceleration is a particular issue for them, to the extent that trying to get up even a moderate incline feels like you’re straining against a large, invisible net. Now, I don’t exactly drive the most powerful car in the world, but even my modest ride can get up hills without feeling like it’s pushing against a wave of stodgy porridge. Mind you, I don’t have a rocket launcher strapped to the roof either.

This crippling lack of acceleration doesn’t really ease up until around halfway through the second tier of cars and, perversely, makes the opening tier of races much more difficult than later tracks. You see, unless you’re playing on ‘easy’ (or lower), one or two crashes in a crappy car will put you well out of the race. The lack of power in your car means you may never catch up, and no amount of guns can make a difference if you’re perpetually out of range.

Crashing doesn’t even have to be your fault. The AI racers are aggressive, happy to shunt you (and each other) into roadside debris and make use of their own weaponry where possible. This is refreshing, because it means not every single car in the race is focused solely on you, but it also means you can be the inadvertent victim of a pile-up. Forcing your way through a crash is solid fun with a fast enough car, but it spells possible disaster if you’re driving any of the earlier vehicles. 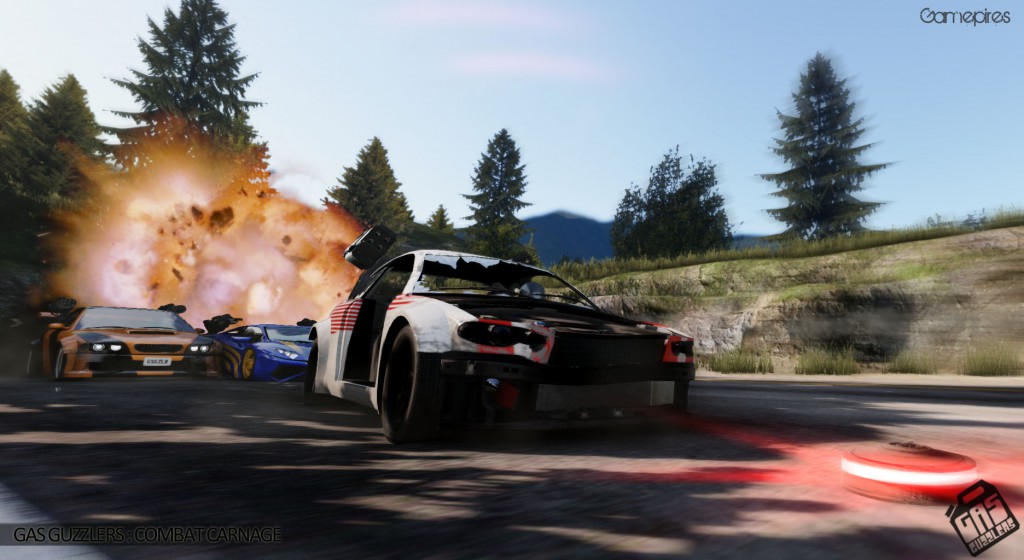 Track pick-ups like nitro boosts can mitigate these effects to a certain extent (and there’s a smart system in place that gives you increments of nitro for causing road-side damage), but the only permanent solution is a better car. A car which isn’t even going to be available to you for another ten or fifteen races.

After reaching the second tier, the inverse difficulty curve kicks in and things become much easier. All of a sudden your cars can get up hills at a pace slightly faster than walking and the weapons available to you can actually hurt people (the first tier of weapons are more disruptive than destructive). At this point, you can probably bump the difficulty back up to ‘normal’ or higher.

Battle and Knockout races become rather more entertaining when everyone in the race has the necessary speed and firepower to compete properly (although seeing the AI cars pull away at higher speeds than you even though they’re in exactly the same vehicle is still irritating). Sitting behind a troublesome rival and blowing them away with a minigun is quite satisfying; as is grabbing some roadway pick-ups and cause havoc with a blanket of landmines and smoke.

Multiplayer might be quite fun too, if enough people were ever around to form a game.

Adding to the carnage is a sense of humour that veers between the crude and outright surreal. Opposing drivers have names straight out of the Bart Simpson crank call hall of fame (no sign of the upstanding I.P. Freely though, sadly), while the garage in which you upgrade your cars has an eclectic selection of musical treats. From 1950s US rockabilly numbers to what sound like Croatian folk songs (and even football commentary), you’ll always have something weird to amuse your aural senses. 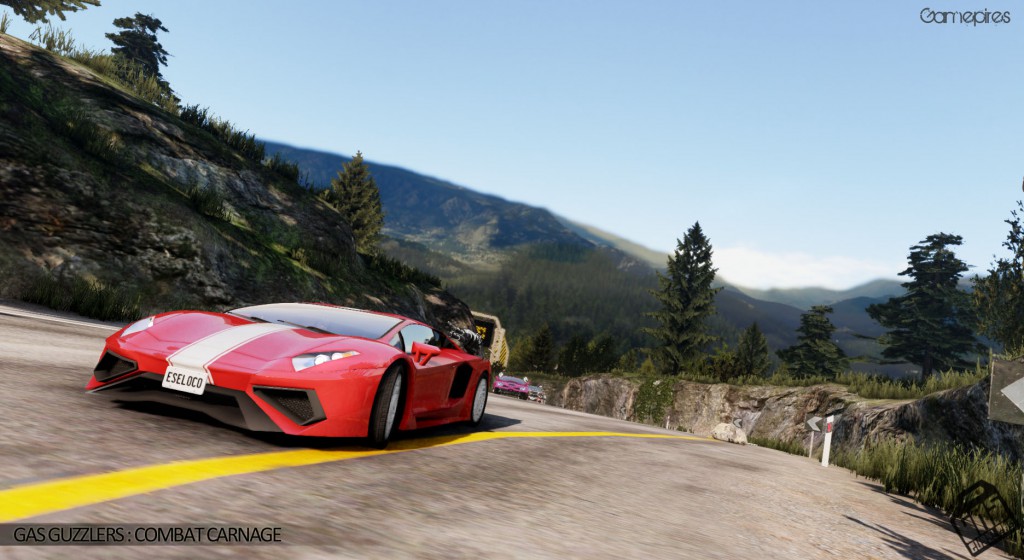 These tunes are much better than the rather generic rock riffs you get mid-race, but at least there you can also listen to your driver do the most outlandish impersonation of Arnold Schwarzenegger ever committed to tape. Alongside unlicensed cars with names like the ‘Lord Crapee’, it all helps add to the slightly unhinged nature of what you’re doing. It’s just unfortunate that the game takes so long to hit its stride (or find its gears, I suppose).

You could perhaps argue that the early purgatory Gas Guzzlers puts players though just makes the use of deadly force that much more satisfying on later tracks, but that’s scant consolation to the people who’ve had to play through it. Once the game picks up speed, it does broadly provide the kind of high-speed explosive thrills promised; but it sure takes its sweet time getting there.

EA Will Be 100 Percent Digital