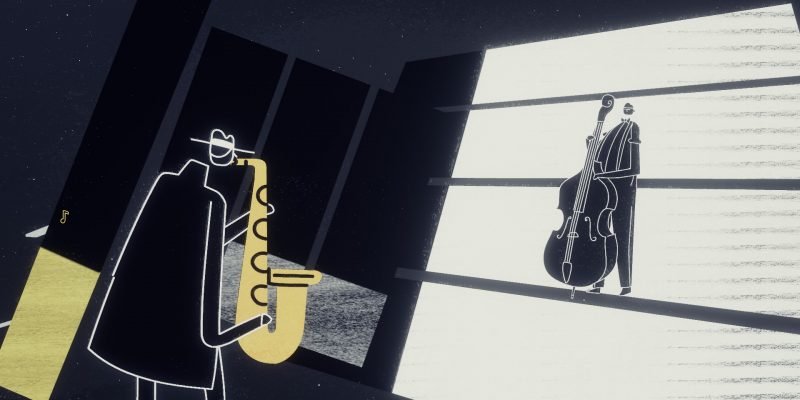 Video games are an excellent storytelling medium. The manner by which most attempt this is fairly standard, often with similarities to film, allowing the player to behave as if they themselves were the camera. Genesis Noir bills itself as a point-and-click-adventure and, while this isn’t wrong, it doesn’t reflect the entire truth. The game uses point-and-click tropes and formalities as a medium to weave together a surreal, avant-garde mixture of strange gameplay sections and improvisational jazz-esque freeform meditations. It’s a uniquely compelling game that will satisfy people willing to absorb its off-kilter sensibilities, although others may have some misgivings.

Genesis Noir begins with a character known only as No Man eyeing a diner amid passerby. The world is simplistic, yet brimming with life. Splashes of color show their specters when appropriate, as reflections of the towering concrete behemoths above dance in the sky. Shortly afterward, he’s whisked from place to place in a dizzying manner before finally finding himself privy to a murder attempt. The jealous Golden Boy, a saxophone player for the Divine Jazz Section, fires a bullet at his lover and bandmate, a singer named Miss Mass. Only, the bullet is the Big Bang, and the three of them are cosmic entities.

No Man’s immediate goal is to save Miss Mass from the Big Bang. The terminology isn’t attempting to be cute or highly stylized à la any Suda51 title. It’s the literal Big Bang: the expansion of the universe as we know it. There is little dialogue throughout Genesis Noir, although even that appears as the climax looms. Each of the game’s chapters are precluded by a bit of descriptive text describing the unfolding events within the context of astronomy. Some will have trouble following along with the game’s threads, as it has the attitude of an improvisational jazz album: appealing if you have the taste for it, but jarring and with few rules in place. 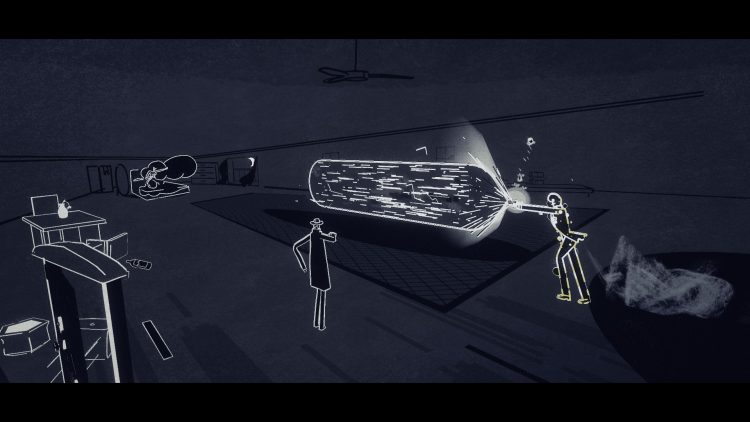 Individual chapters may feel loose and ever-changing, but there’s a definite structure acting as Genesis Noir‘s backbone. No Man is a street-based watch salesman by trade, and he’s able to leap into spots in our universe’s upcoming history by picking singularities within the Big Bang bullet itself. Each chapter requires No Man to accomplish tasks that eventually reward him with a small watch piece. Many will recognize the shape of these pieces as having the same curvature as the Golden Ratio.

The chapters all look and feel substantially disparate. One of the earliest shows No Man from an isometric viewpoint as he plants light and dark seeds to absorb barriers. Other chapters rely on specific mechanics and feature puzzles that have no basis in standard logic. These are typically clear despite the inherent risks that come from this manner of game design. I hardly ever found myself overwhelmed due to their demands. Some can be somewhat tedious, however. One of Genesis Noir‘s puzzles that I was less than fond of required me to arbitrarily connect nodes to try and activate clusters. It made as much sense to me then as that sentence likely makes devoid of context.

Many of the puzzles are of that nature, though. The only option is to try out different combinations to find one that works. Another had me swapping between a growing list of components to find an ideal mate for a similar object with hearts above its head. It was endearingly strange. However, the least enjoyable puzzle in all of Genesis Noir has to be a specific one that tasks players with recreating sine waves using increasingly vague directions for various machines to activate a supercollider. This segment went on for five individual puzzles and I felt it was to the game’s detriment. 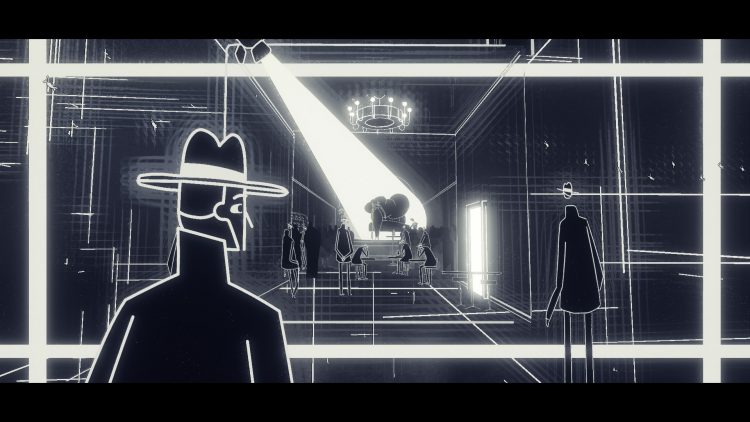 I assumed that Genesis Noir might be a first-person game, but that isn’t the case. It varies between side-view and overhead perspectives, with the occasional instance of cameras with lower orientations. Chapters typically allow for fully 3D movement regardless of perspective, although that simply varies. The game can be played with either a controller or mouse and keyboard. However, being able to accurately click is a massive boon, so I would strongly suggest against attempting the former. Applications for the mouse movement are often novel and practically gesture-based. It’s isn’t uncommon to mimic movements with the mouse to complete certain tasks.

It all works well and the game’s cursor makes it clear what can or can’t be interacted with. But many of Genesis Noir‘s sections contain little to no actual gameplay. It’s not uncommon for a click to accomplish nothing, save for moving the narrative further. This goes into overdrive in the last half hour of the game, where I did little more than hold my mouse in one direction while the camera rocketed backward and forward to show me the bizarre, creative world I was involved in. In many games, I would have minded more. 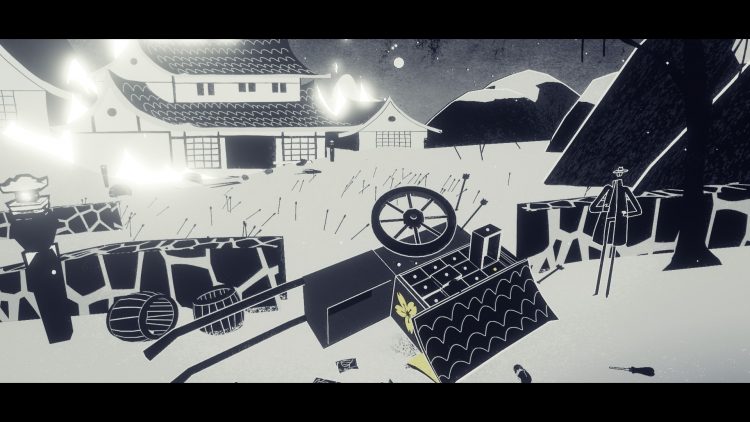 Genesis Noir is absolutely gorgeous. The aesthetic is simultaneously endearing and relaxing. The clash of astronomy and noir are striking and I often found myself gawking at how purely artistic each and every area was. I routinely found myself taking screenshots solely due to the frequency with which mesmerizing shots appeared on my screen. From a presentational standpoint, there is nothing else quite like this game. That extends to the sound design, which is equally striking and bold. If you have to ask, yes, there’s a lot of jazz.

Dancing in the sky

One section of the game sees No Man with a saxophone improvising music with a street musician playing upright bass. It starts rigidly before opening up considerably. It’s a truly splendid segment. Genesis Noir is not a lengthy experience though. Most will see its end in roughly four hours, but I found this to be satisfactory.

Genesis Noir is a strange, highly creative celebration of unusual puzzle mechanics, jazz, and astronomy that come together in a unique, captivating manner. Some sections can drag and a lack of clarity can become an issue, but this is a must-play title for anyone remotely interested in its premise. It may not be lengthy or especially challenging, but its presentation, story, and imparted wisdom will likely resonate with many, just like the freeform Jazz it carries in its DNA. 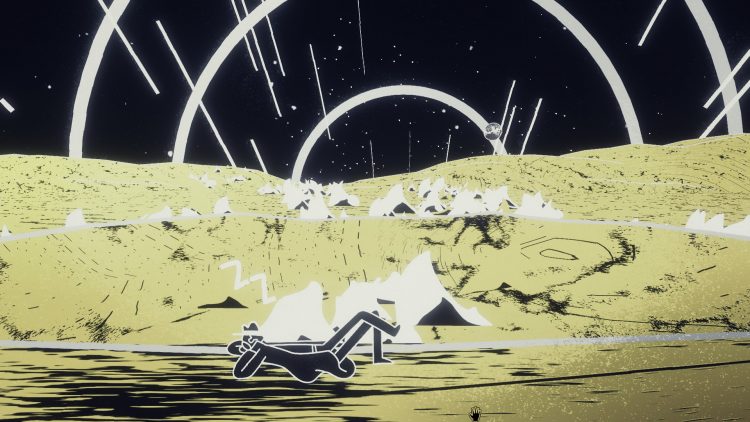 Stirring, artistic, and emotionally resonant, Genesis Noir is quite a unique experience. The puzzles can be tedious, but the game makes up for it with gorgeous art direction and sterling creativity.