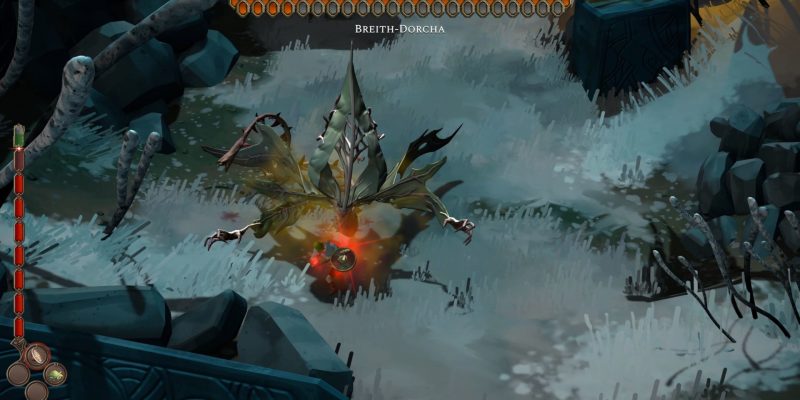 I’m pretty sure that Gods Will Fall is the by-product of throwing the “Souls” and “Roguelike” genres into a blender, just to see what in the unholy hell would come out the other side. Pure and simple. As such, there are going to be countless folks that love it for the challenge, and just as many that hate themselves enough to see find endless aggravation enjoyable. Sadly, there’s likely a third faction of folks who share the gut instinct that I had, voicing heaping doses of, “fuck this shit,” while cursing it with the burning passion of a thousand suns.

Fortunately, if you are trying to review a game professionally, you need to put far more effort than a cursory glance at the core mechanics. As someone who has traditionally gotten my dick kicked in by the “Souls” genre, I certainly had my concerns. Fortunately, once I was able to get through the first few hours of wanting to punch the wall, the experience started to grow on me. You know, like in a life-sucking parasite, kind of way.

The narrative arch reads a bit like a mythical tale, mirroring the likes of the Greek and Norse that preceded them. In this version of history, gods rule over humanity with a brutal, closed-fist of injustice. If you angered these regional deities, you could expect to be dispatched quickly and brutally. Rising in opposition is a band of Celtic heroes, that you control, both collectively as a team and individually in battle. I know that might sound a bit confusing, but trust me when I say it actually makes a ton of sense.

As a team, this randomly generated band of misfits will traipse across the countryside, picking fights with whichever holy entity strikes their fancy. The entire map is freely available to explore, and dungeons can be taken on in virtually any order. Any character can either be captured or killed while attempting to individually tackle each of these uniquely designed stages. Seized units are then trapped in purgatory until they are rescued by a fellow team member. 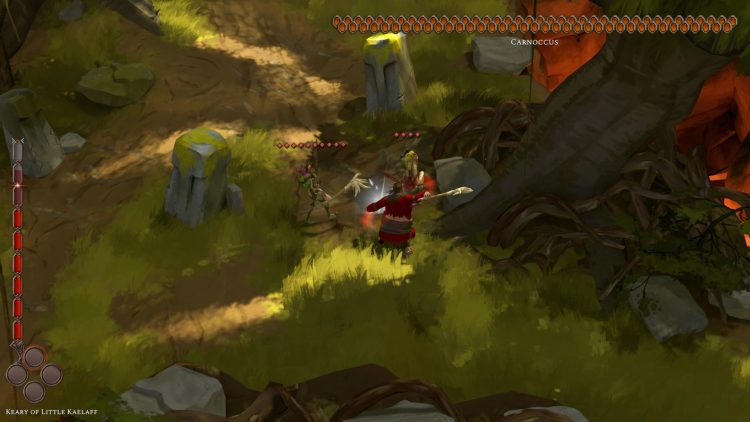 Slaying a god actually has a couple of different results. For one, all team members that have already been captured in that specific dungeon will now be freed. Unfortunately, if a party member falls victim to a finishing move, they are now dead permanently. On the other side of the coin, in Gods Will Fall, the death of a god also can have a large impact on the remaining stages, by both leveling up the abilities of remaining enemies and throwing in additional baddies, to boot.

To help counter the scaling of powers, clearing out a dungeon can either buff or decrease the stats of party members, depending upon what happened in their last run. Teammates will even form relationships amongst themselves, which can also lead to some interesting and unanticipated side effects. For example, if two characters have developed a close bond, if their friend is captured, they suddenly will experience a boost in vigor and/or strength. However, this can also go the other way as well. If a character is scared of a specific god, their stats may temporarily drop while in that one dungeon. Lastly, polishing off a stage will also result in a bevy of new weapons and gear being heaped upon your party, which will once again buff each combatant’s stats even further.

The biggest key to success is paying attention to the vigor bar while in battle. Vigor is essentially each fighter’s health bar, except it can be refilled during combat by successfully landing combos. Once these strikes are registered, the vigor bar will rise. However, these increases are essentially “shadow health” that has to be locked in, to become active. It doesn’t matter if your shadow health is through the goddamn roof. If you haven’t locked that health in, you better get your affairs in order. 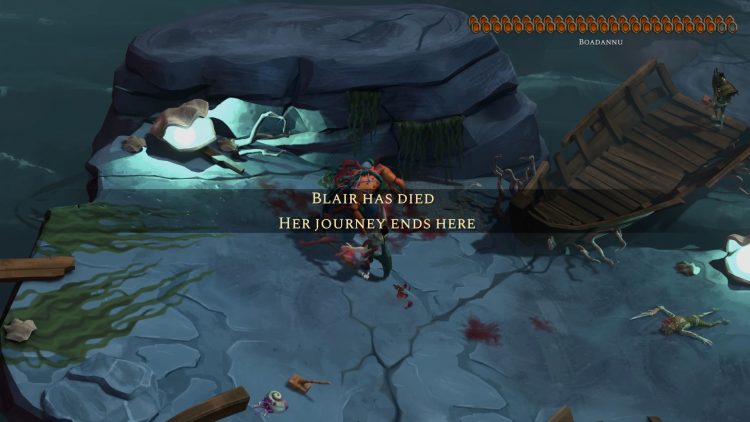 It’s very complicated to describe how I felt while playing through the admittedly brutal aspects of Gods Will Fall. On one end of the spectrum, I found the dungeon crawling aspects of the title to be delightful. Though most adversaries act like they’ve been freebasing arsenic before heading out on patrol, there are a handful of the more powerful units that eventually tone up the difficulty through being big, beefy, hell-raising abominations. The main problem was, it felt like their enemies weren’t actually getting smarter. Instead, they were just getting tougher by having longer health bars and stronger attacks.

The more I became accustomed to my party members and how they wielded their respective weapons, the more I was enjoying the core dungeons. Most times the lower-level opposition were dispatched with relative ease. Though they did admittedly get stronger (notice I didn’t say more difficult) as the campaign went along, I was still able to clear most stages with a full health bar, going into the final boss conflict. 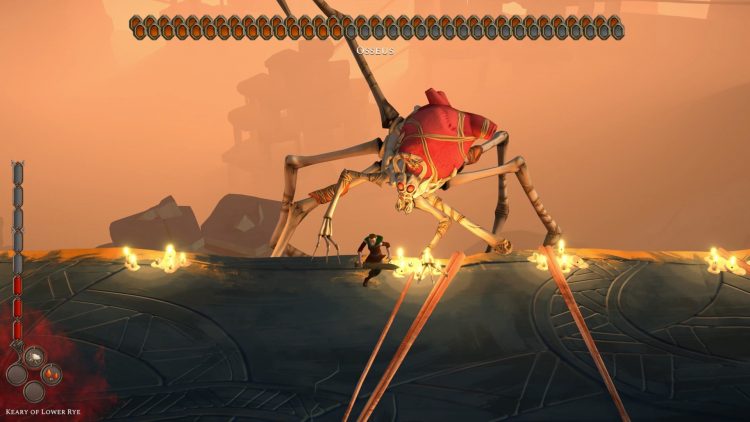 Every map comes to a head, concluding with a knock-down, drag-out brawl with one of the previously mentioned gods, hell-bent on making humanity’s life unsustainable. In Gods Will Fall, conflicts proved to be a sliding scale of bullshit that was purely dependent upon if you were carrying the proper weapon to counter a prospective adversary. I say a “sliding scale,” because regardless of whether you were actually properly equipped for a conflict, every boss character felt like it had a couple of cheap, unblockable attacks, that it liked to spam, the lower its energy bar glided.

Most of the time, as long as you were able to squeeze in a couple of combo attacks between the spamming sessions and then reclaim/lock in your vigor, the effects of these garbage tactics could be counteracted. That said, there were numerous times where I hurled both obscenities and my controller in the general direction of my screen. There is nothing more frustrating and demoralizing than kicking the ever-loving shit out of an entire dungeon, only to be dismantled by a cheap boss in a matter of seconds. 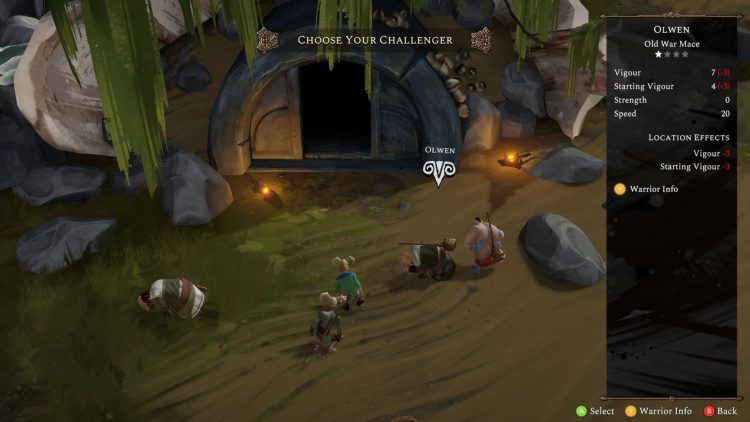 Yet, despite feeling I was being continuously cheated in skirmishes, it only strengthened my resolve. In my life, I can count on one hand the number of times that my personal irritation resulted in more motivation. Normally I would want to run for the exits in favor of something that would offer a bit more positive reinforcement. It feels like Gods Will Fall has somehow hit a sweet spot where I can both hate and enjoy the experience at the same time, which is really saying something.

Personally, I found Gods Will Fall to be a rather watershed moment for my gaming career. By all accounts, this should be a game that I loathed. Yet, after a few hours of banging my head against the wall, suddenly everything clicked. And while there were still infuriating moments of cheap bosses and floaty combat, ultimately, the thrill of finally clearing a massive hurdle was hard to beat. This is definitely an experience where you will get out what you put in. Your mileage may vary, but just know that if it doesn’t “click,” it’s likely your own fault!

Despite a sliding scale of difficulty and cheap boss tactics, Gods Will Fall has the improbable ability to endear itself to those it hurts most. Both masochists and newcomers alike will find something to love in this short, but challenging, Celtic ass-kicker.

G4 is planning to resurrect X-Play, Attack of The Show in 2021