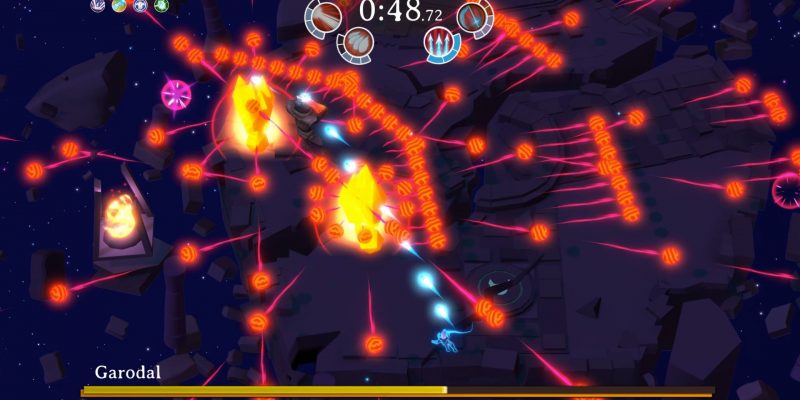 Boss battles have long been known as a tipping point where game can genuinely flip-flop between being good or bad. A good game can be elevated to the pantheon of instant classic if these key encounters are handled well. Unfortunately, the opposite is also true. But what about games that are exclusively made of boss skirmishes? The newly released Godstrike addresses this question head on — in a way that only a shoot ’em up truly can.

In Godstrike, you play the role of a mystical being named Talaal. She is tasked with doing away with a handful of her family, who also just so happen to be deities — and you’re essentially along for the ride. What this ultimately boils down to is a series of some of the hardest boss battles I’ve ever played in a shmup. It was brutal, unforgiving, and downright nasty to grind through, all the while keeping me constantly on my toes.

I will personally cop to this experience being nothing like what I was expecting. Going in, I was looking for long, sprawling, side-scrolling stages, chock full of enemies to dispatch. Instead, Godstrike is singularly focused on boss battles. It’s essentially a boss rush, somewhat in the vein as something like Furi. Though forgoing the traditional shmup formula is a bit atypical, when each boss has three to four evolutions per encounter, there is still plenty of action to sink your teeth into.

What helps set Godstrike apart from the competition is its unique health system. It hinges on the effective use of time, as opposed to the standard dedicated health bar. Initially, you have a bar that tops out at roughly four minutes and 40 seconds. This means that if you managed to avoid being struck by any enemy projectiles, you’d have just shy of five minutes to dispatch the adversary. Once the time expires, you’re down to the last hit. At that point, all it takes is a minor scratch to send you flying into the afterlife. As I mentioned earlier, this timer also acts as a health bar of sorts. Every time you take damage, 10 to 15 seconds are ticked off of the timer. Considering that there is no way to restore time during a skirmish, it becomes insanely critical to avoid projectiles at all costs. And trust me when I say you are going to be doing a ton of bobbing and weaving. This game puts the “hell” in “bullet hell.”

Before each battle, there’s an opportunity to tweak your loadout to equip up to four unique weapons. Every armament that’s equipped decreases the amount of time on the clock. Each of the attacks are mapped to the two bumper and trigger buttons, respectively. It introduces a very interesting give and take, where it’s critical to determine if the benefit of a specific weapon overcomes the hurdle of having less time to complete encounters. Additionally, there are also passive abilities such as damage depleting less time off the clock, reflecting shots at adversaries, or faster movement. Fortunately, activating these passive abilities don’t eat away at the clock in the same manner as weapons. Let’s get ready to rumble

Each match begins with the patented “Borderlands Boss Shot,” followed by a standard boss battle. Despite everything feeling rather “paint by the numbers” as far as shmup boss encounters go, there is one thing that sets Godstrike apart: It’s really fucking hard. To put it into perspective, it took me over an hour and at least a dozen attempts just to complete the goddamn tutorial. The freaking tutorial! I genuinely wish that was a joke, but it’s the honest truth.

These all-out assaults are genuinely difficult to conquer. I will openly admit to not being the best at shmups on the whole, yet these battles were legitimately embarrassing me. The problem was, it never really felt like I was being outsmarted by a boss as much as it was the enemy winning through sheer attrition. Each boss would just wait out the clock before swooping in for the kill. One major beef that I had was with the core design of the game. Gameplay revolves around the way weapons and perks unlock in the story mode. Instead of feeding these items when the player was struggling, they were instead withheld and kept as rewards for clearing a stage. The problem was, if you didn’t feel like the new items were beneficial, suddenly you could get stuck in a losing rut that feels impossible to overcome.

Multiple levels of frustrations got compounded after losing round after round. If I had just given up then and there, I would’ve had a terrible perception of the game. However, all it takes is that one time where the stars align and you finally defeat your adversary. And all was forgiven. It feels that good to win. While progressing through the standard narrative, the story is told through a series of pre-match dialog dumps. If you’re looking for a gripping tale with deep lore, it may be best to look elsewhere. Sure, there is a storyline of sorts, but without the aid of cutscenes to help develop the plot, the majority of the narrative falls a bit flat. But let’s just be honest here, if you’re playing Godstrike for the exposition, you’re doing shmups wrong.

Even if you are good at shooters, I have the sneaking suspicion that Godstrike will give you fits. That said, if you’re able to blow through the campaign without losing any matches, the total runtime would clock in at under an hour. While this sounds extremely brief, let it be known that most players are likely going to take much longer to conclude the storyline. Fortunately, this is also buffered by the challenge and arena modes. These are just campaign stages with the difficulty turned up, but there are up to 10 additional weapons and passive abilities at your disposal.

Despite the gameplay being insanely difficult, there is so much to like about Godstrike. The beautiful presentation, hectic action, and overall lack of remorse will be something you’ll either love or hate. For this reason, it’s hard to completely recommend, unless you are a bit of a masochist. If brutality is your bag, this will be the kind of experience you won’t want to miss.

While it's easy to call a game, "too hard," Godstrike goes above and beyond to savage you. Unless you're willing to put in the time and pain, this will not be an enjoyable experience. However, if you can ride the crest of the difficulty curve, this bullet hell bonanza will keep you coming back for even more brutality.

Balan Wonderworld demo is going to be taken off Steam