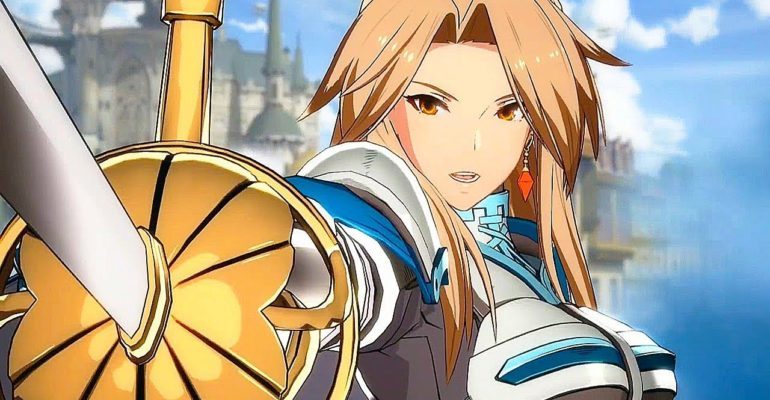 Granblue Fantasy Versus wants to be your new favorite fighting game — even if you’re a complete newcomer to fighting games in general. And boy, does it come on strong. Beautifully presented, easy to get into and eager to please, Granblue Fantasy: Versus delivers its flashy fighting capital-F FUN with a perpetual shit-eating grin and twinkle in its eye. Despite my initial skepticism, I couldn’t help but fall for its cheesy charms. Why, yes, I would like to have a good time.

Anime was always something of a black hole in my geekdom. I don’t have more than a passing appreciation for it and the aesthetic isn’t a big draw for me. But I do know my fighting games, and I have a lot of respect for Arc System Works‘ oeuvre.

On first impression, Granblue Fantasy Versus looks as if Soulcalibur had wholeheartedly embraced its anime influences. But as a new fighting game franchise squaring up to venerable legacies like Street Fighter V and Mortal Kombat 11, the plucky newcomer has everything to prove. So, can this bunch of bishonen and waifu fight as well as they flourish?

When you’re big in Japan 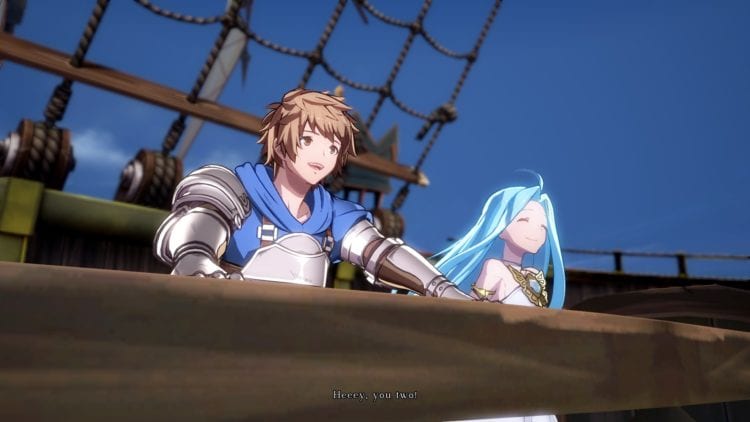 Granblue Fantasy‘s story gimmick is flying on an airship. Not that it matters much here.

Granblue Fantasy may be a bolt from the blue as far as those of us in the western hemisphere are concerned, but it’s a huge deal in Japan. The free-to-play JRPG from Cygames is a hit mobile and browser game with over 24 million players worldwide. Its monetization is typical for this kind of affair, a ‘gacha’ system of random rolls on a slot machine for rewards to grind out in the hope of winning the waifu or weapon upgrade of your choice. Granblue Fantasy is making bank and is ready to expand into a global media franchise, with a tie-in anime series out and action-RPG Granblue Fantasy Relink slated for future release.

The fantasy story of Granblue Fantasy takes place in a world of floating islands in the sky, and centers around a plucky crew of heroes that travel via airship, a classic JRPG trope. But it basically doesn’t matter in this game, so don’t get too excited about kicking anyone overboard in Versus. The important thing about the franchise isn’t so much its story as its stellar art direction and music, thanks to composer Nobuo Uematsu and art director Hideo Minaba, who you may know from older Final Fantasy games. 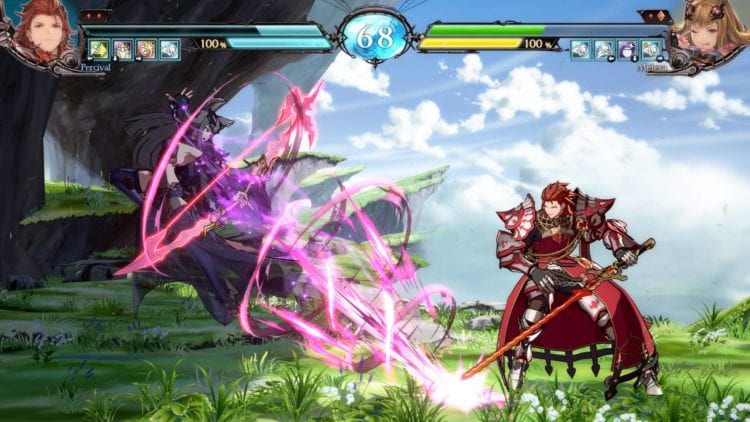 Background details, character design, animations, particle effects – Granblue Fantasy Versus is a feast for the eyes.

Granblue Fantasy Versus shouldn’t be dismissed as a shallow spin-off to cash-in on the mobile audience. Developer Arc System Works is renowned for its flashy, technically complex anime-style fighters such as Guilty Gear and BlazBlue. The studio’s work on Dragonball FighterZ shows that it can do a great job with a license, too.

But this game is a very different beast from the studio’s previous offerings. First thing’s first though, Granblue Fantasy Versus absolutely does deliver on a selling point that both Arc System and the mobile game are known for⁠—it’s seriously good looking.

The art direction of Granblue Fantasy Versus is its strongest feature. Everything from the embellishments of a fighter’s armor, the fluid animation, the splashes of water of puffs of cloud in the background, has had a lot of work put in and it shows. On max settings, this game delivers over the top anime battles like anything, with super moves activating mini-cutscenes. The simple control scheme also means that, despite all the animations and colors flashing on-screen, you won’t lose track of what’s going on. Almost every single character is pretty in their own right, as befits their origins as collectible waifus and husbandos in a gacha JRPG. But they’ve got personality in spades, and that’s what makes Granblue Fantasy Versus a worthy fighting game. 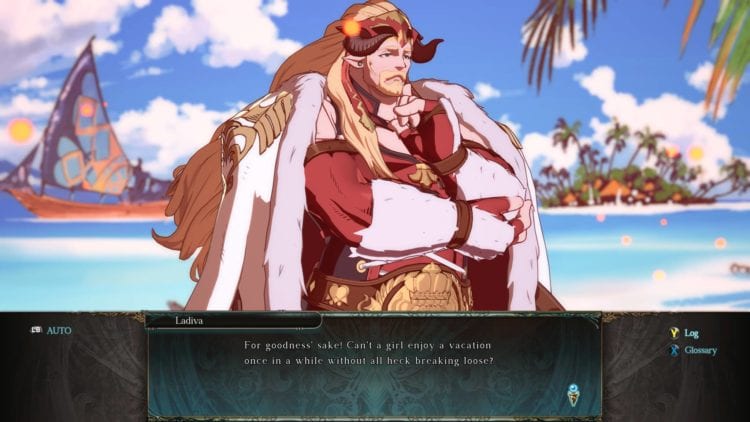 Ladiva, a grappler who thrives on the love of the crowd, is just one of Granblue‘s diverse cast of colorful personalities

I’d always argue that mechanics aren’t the most important factor in a fighting game’s appeal. Really, what makes or breaks these games are memorable characters. You need your Blanka, your Dhalsim, Scorpion and Sub-Zero, Nightmare and Taki. The secret sauce is costume design, fighting style, and making the animations on screen—in fighting and taunting, victory, and defeat—sell the fighter’s personality. At first I was dismayed with the titular Gran, a cookie-cutter fantasy hero with equally generic sidekicks and a boring moveset to boot. Thankfully, the roster has plenty of actual cool people that I can kick his face in with.

Granblue Fantasy Versus‘ flamboyant cast isn’t extensive, but they’ve each got something interesting going on. There’s a doofus trio of brothers who can form an awkward human (kind of) pyramid, a tiny knight with a towering princess crown who stands on crates to taunt her enemies, and a bearded trans wrestler who flexes and works up the crowd during the match. That’s just to start with. Even the most outrageous fighters are convincing and endearing as characters. I think most players will find someone to love in Granblue‘s motley crew. 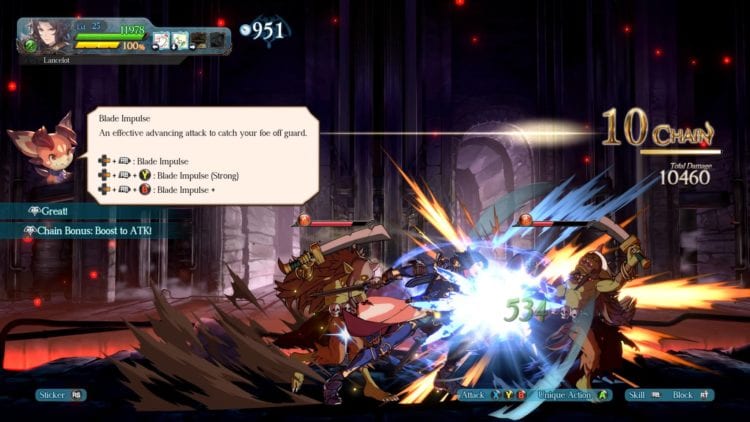 The RPG mode has special missions that train you to best use each character.

One standout feature of Granblue Fantasy Versus is its willingness to onboard fighting game newcomers. This might come from a desire to ease in players crossing over from the original RPG. The result is that the game’s mechanics and tutorial system are fantastic for anyone who wants to learn fighting game fundamentals.

Fighting is based around three basic attacks – light, medium, heavy, that can all be repeated for simple short combos. One button controls each character’s ‘unique’ action. These complement each fighter’s overall style. For example, magic archer Metera relies a lot on range, so her unique is a dash that enables to put a lot of distance between her opponent quickly. Stoic swordmaster Narmaya’s unique switches between aggressive and defensive stances to unlock different specials.

Special moves are also based around one button, which can be modified by a second. The catch is that these abilities have a cooldown. If you activate them by a traditional joystick-style motion, the cooldown is shorter than if you go the easy one-button route. There’s only two super moves per character. Both are relatively easy to pull off and always look great. I blistered my thumbs trying to master Akuma’s raging demon as a pre-teen. But did it have to be that way?

The art of fighting 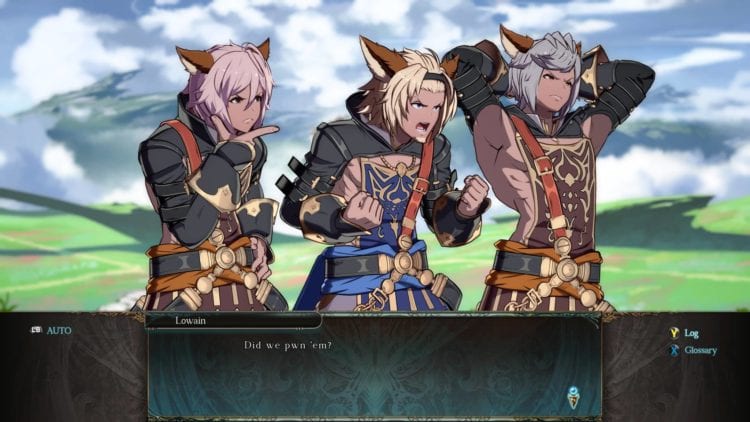 Even the fighters seem to know they’re in a game.

From these simple building blocks, Granblue Fantasy Versus aims to teach you the entire language of fighting games. The tutorial system is one of the most comprehensive I’ve ever seen, explaining elements in-game that players of other franchises have to turn to the community to find out. You get a handle on your combos and moves. Then it’ll cover zoning, mix-ups and even tick throws.

If you have no idea what I’m saying here, then this might just be the perfect fighting game for you. Then there’s how to counter particular characters. And for eager warriors who get bored spending time in school, the RPG mode also sprinkles in character tutorials with the extra incentive of in-game rewards. 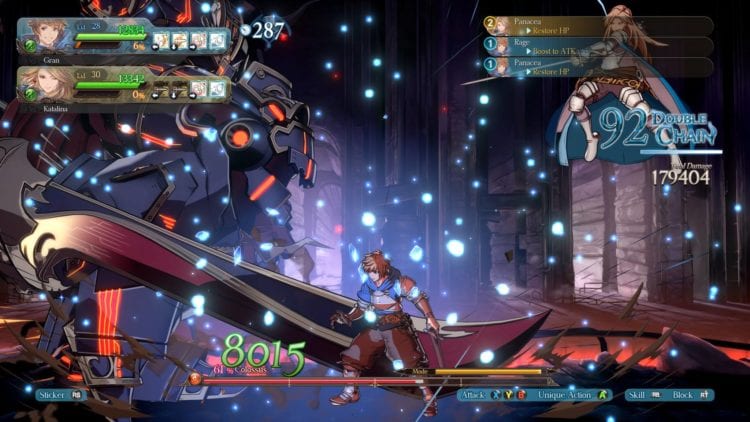 Battling massive bosses is the highlight of the RPG mode, but not the meat of it.

Granblue Fantasy Versus has an arcade mode but the bulk of single-player content is found in the RPG mode. The term RPG does a lot of heavy lifting here. It’s actually a side-scrolling beat-em-up that reminds me of Double Dragon or Tekken Force. You can even team up with a friend or CPU. At first, it’s fun trashing mooks and monsters. Especially as the RPG mode also teaches you how to use each character’s flashiest moves, that can slice through several at a time. The real highlight is the raid battles, which pit you against a super-powered boss with a variety of special attacks.

The regular RPG missions offer almost nothing in the way of challenge, though, and quickly reveal themselves to be a grind. The random rewards are weapons and experience only useful in the RPG mode, or the occasional skin—some bling that you can show off with online. In practice, all the stats and elements in the RPG mode feel like pointless holdovers of the gacha game DNA. Once you beat the RPG quests (and the story is not worth mentioning), you’ll at least unlock a hard mode. It’s worth coming back for a raid with a friend once you’ve tired of fighting each other.

Not all that glitters 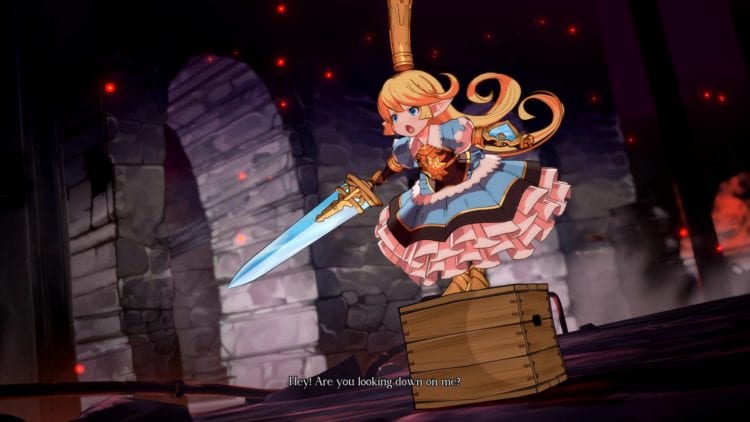 Granblue Fantasy Versus still has its share of shortcomings.

Granblue Fantasy Versus is a great game, and the brash beginner-friendly fantasy fighter definitely deserves a place on the scene. For lovers of the anime aesthetic, it may be the top pick, but I can’t stay it’s the best out there. As much as I had great fun with this game, there are a few flaws that hold it back from being a solid 8.

Some of these are technical, which affected me and other players on PC. For one thing, I was plagued by recurring screen tearing. With no v-sync options in-game, I was forced to tinker with external Nvidia settings to fix this. As far as I know, AMD GPUs are out of luck. The game would also insist on locking my keyboard as Player 2, even with the second controller plugged in.

Online play, vital to the long term viability of a fighting game franchise, also has a few caveats. Steam users are complaining about the delay-based netcode causing problems during matches, though at least for my region (Europe) it wasn’t an issue. More annoying was the waiting, though, though I can only hope that more players are honing their skills for some ranked competition.

My other gripes are with content. I love Granblue Fantasy Versus‘ cast, but can’t help but feel that the roster is fairly light for the price. The RPG mode also has grindy-elements lifted from the mobile template that only pad out the space between the more interesting raid battles. I get that Granblue Fantasy Versus is trying to do something different here, but more love on the traditional fighting game single-player modes, like arcade ending movies, or a survival mode, would go a long way.

This gorgeous anime-style fantasy fighter is great for beginners and fans of 2D brawlers. It's fun, and flashy with genuinely endearing characters. However, a somewhat underdeveloped single-player experience and dated netcode hold it back from being truly top-tier.