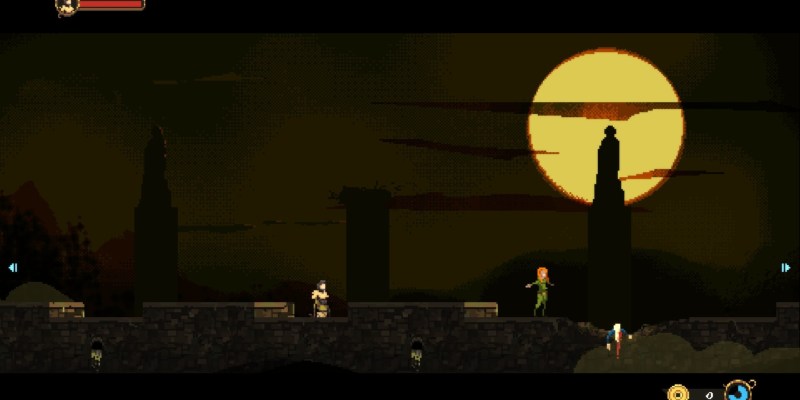 Taking a brief look at Guild of Darksteel makes it seem like a typical side-scrolling action adventure. You might even think it’s a Metroid-like. However, it is neither of those things. Instead, we get a narrative-focused game with repetitive rhythm-based combat where you can’t move, only block and strike. The combat is honestly better than it sounds and the game’s three hour story is compelling enough to get through, but it’s slight and simply doesn’t have enough to it to warrant a purchase from most people. You can certainly do worse, but the simplicity of the game’s level design and the adherence to identical battles hold it back.

Guild of Darksteel is made up of pixel graphics, but they’re honestly kind of ugly. The game’s areas and characters mostly appear muddy and unattractive. The story concerns an immortal warrior wearing Darksteel armor, which grants the wearer infinite life via magic. The tradeoff is that they can’t take the armor off, so I guess they go through life smelling terrible and sleeping badly.  Upon arriving in the domain of a man named Aganon, our hero joins the titular guild and is then given quest instructions.

The story itself is fine and decently written, but it’s not particularly interesting. Weird tentacles from another dimension have been found in the depths, and Aganon wants to closely investigate this other world. There’s not much in the way of compelling beats or interesting characterization here, although there are a few named characters who show up more than once. The game world is also tiny, with many of the areas that make it up lacking any sense of place. There’s hardly anything off the beaten path. Guild of Darksteel is really just a straight shot to the finish line. 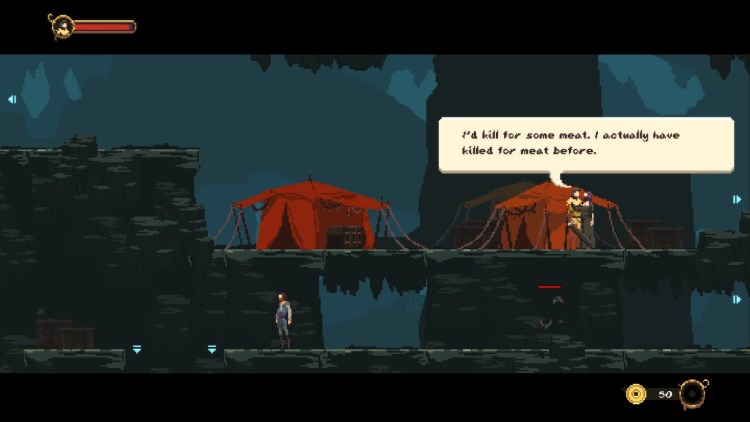 Coins are a sometimes thing

Guild of Darksteel is a 2d side-scroller. All you ever need to do is walk slowly from one area to another. You’re often moving somewhere for the story or finding something for a fetch quest in order to progress. For instance, you’ll often need to interact with a specific NPC and give them an item you’ve found, which will result in you being able to progress further. A few NPCs offer sidequests, but the reward for doing these is so meager that they’re worth no effort whatsoever. All you get is a single skill level up, which you’ll accrue constantly as you fight enemies.

You’ll also be collecting coins, which you’re given two or three times to progress. You only get coins from moving along the story path, though, and there’s nothing to buy anyway, so they don’t even need to be in the game at all. The only thing to do other than the story is grind for skill experience, but there’s also practically no reason to do that, as Guild of Darksteel is mostly extremely easy and won’t give most people a lick of trouble. The only thing that could get in the way of that is the fact that save points are quite far from one another.

If you die, your immortal character is simply ferried back to the last save point you used with all of their items intact. But it can be a pain to walk back to where you were, because enemies respawn and you’ll have to fight every single one that’s in the way. Combat cannot be avoided and you can’t run away, so the only way out is through. As Guild of Darksteel isn’t actually an action game, this is where things can become a bit of a drudge. 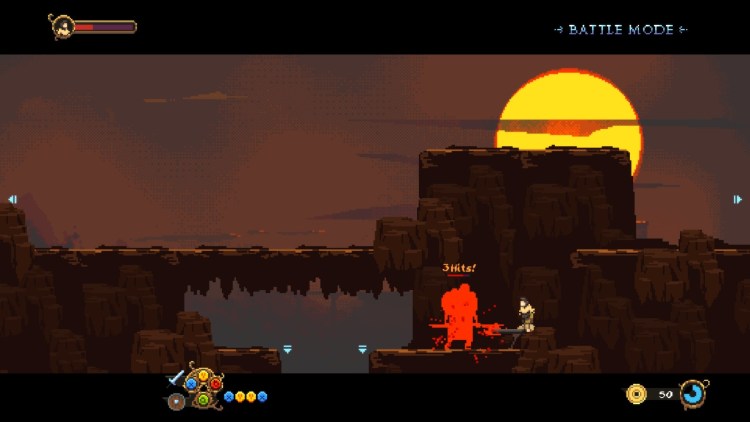 Enemies in Guild of Darksteel walk left and right while mostly sticking to a small section. When you come close enough to one, you’ll enter battle mode. Once in battle mode, you can only block and attack. At first, I found this rather enchanting and a bit unique. Enemies wildly telegraph their attacks and blocking at the right time will negate any damage. Enemies can also block your strikes as well. You attack by using a handful of combos that make use of three buttons that need to be pressed in specific orders. Most of these combos aren’t all that useful, though, and I found myself almost exclusively using two by the game’s midpoint.

Different combos have different uses. Successfully landing one can grant a damage boost to a certain combo type, but no enemies have all that much health to begin with. One of the most useful combos in Guild of Darksteel, bloodbath, heals you the more you level it up. As you dispatch foes, they often drop blue crystal chunks that either fill a quarter of your experience gauge or half of it. Once it’s filled, you can level up a combo to increase its effectiveness. Leveling up bloodbath basically means that you’ll never die unless you screw up massively.

And screwing up massively is quite hard, as individual enemy types always have just one pre-programmed order of moves. For instance, you’ll meet a foe that strikes twice with their sword and then blocks after. This is all they ever do. Once you memorize an enemy’s attack pattern, they will never surprise you, as each instance of that enemy will behave identically. This completely negates any sense of enjoyment or satisfaction that would come with the combat. Instead, it makes it rote and tedious after the first hour or so. Actually having to carefully watch enemy movements and respond in turn would have made this game a lot better. 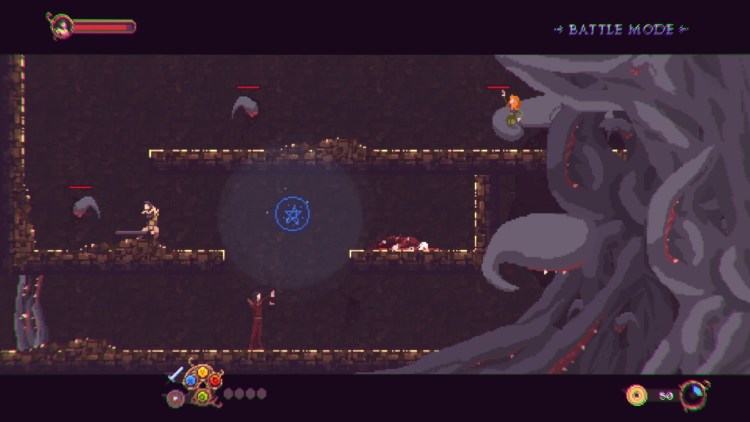 As such, Guild of Darksteel is just okay. It’s a passable way to spend a few hours, but nothing more. The level design is dull and bland, the combat is pointlessly redundant, and the story often seems silly and aimless. I’d struggle to call any of its elements bad, but there’s simply not enough going on for me to recommend the game. If the story or combat had been put together with more effort then that might have been different. At least the attack combos look kind of cool.

Guild of Darksteel is a short, simple game that only takes a few hours to get through. There's nothing offensive or necessarily bad about it, but it's hard to recommend all the same.