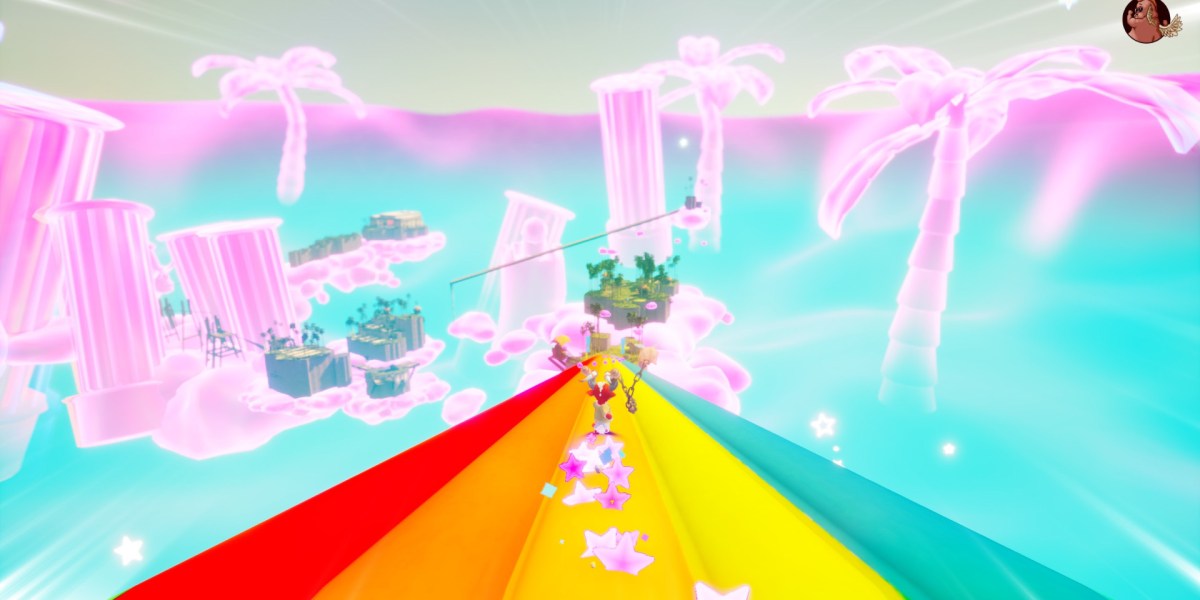 I tend to get very excited when I see that a new cartoony 3D platformer is coming out. Hell Pie is easily one of the best games of its ilk to release in some time (as long as we’re not counting Psychounauts 2). It’s got a good amount of content, sharp design, great controls, plus a strong concept bolstered by its art direction. If you’re looking to explore colorful worlds with a satisfying movement system, then there’s not much excuse to miss out.

Hell Pie kicks things off with a demon named Nate sitting at his office desk. He answers his phone one day and is immediately greeted by Satan, prince of darkness or whatever you feel like calling him. Yes, I know that “satan” is just the Hebrew word for “adversary,” but people give you looks when you point that out. Satan’s birthday is coming up and he intended to call his chef and instruct him to bake a special pie for the party. But he got the number wrong. He then instructs Nate to take care of it, so the little dude sets off on a diabolical adventure.

After meeting with the chef, he’s told to go out and source the ghastly ingredients for Satan’s birthday pie. Unlike nearly every 3D platformer that typically releases, Hell Pie is very much in the vein of Conker’s Bad Fur Day. There’s swearing and offensive humor aplomb. Some of the content here can be quite sacrilegious, so anyone concerned about that should steer clear. Although, they probably don’t tend to play games with “hell” in the title anyway. Hell Pie can be quite funny, although it’s also rather puerile at times. Still, it all works very well with the game’s tone. It’s nice to have another irreverent 3D platformer after all these years.

Along came a spider

The game kicks off in a hub world that’s really a suite of offices in hell. Although, there is a supermarket. As Nate, you need to collect ingredients and then give them to the chef. Once you give him enough, he’ll give you access to another elevator where you’ll go get even more. The game is centered on four decently sized hub areas full of collectibles, with lots of exploration to be had.

You’ll go to a chain of tropical islands, an area famous for its restaurants, a dense jungle, and one last place that I really don’t want to spoil. The world design is excellent, and it’s a blast to run around, grab things, and fight enemies. Three of the four areas also have a few large levels each that you’ll head into for ingredients. One has you infiltrate a human slaughterhouse, complete with conveyor belts. A particularly funny level sees Nate going through a giant waiting room to see a doctor by stealing number tickets from patients to get through doors. Hell Pie is consistently clever and doesn’t let up.

Of course, having enjoyable levels in a 3D platformer wouldn’t mean much if the movement and platforming weren’t up to snuff, but Hell Pie also succeeds here. Early on, Nate is partnered with an abducted cherub named Nugget who is then chained to him. Pretty dark. Your attacks are primarily based around swinging Nugget on his chain. You’ll also jump and double jump to get around, but the most unique addition here is that you use Nugget to swing around like Spider-Man if he didn’t need to attach to buildings.

As you explore, you’ll find many cans of meat candy. After Nugget eats these, you get a skill point that’ll enhance Nate’s abilities. These are quite transformative much of the time, as you can basically increase the number of swings Nate has per jump from one to five. You’ll also add a couple of health points and new moves. By the end of the game, Nate becomes a parkour powerhouse, which the last hub does a marvelous job of accommodating. The other main collectibles to discover are tiny unicorns. Once you find enough of these, you can sacrifice them at statues to give Nate a new set of horns that each have a unique ability. These are pretty much exactly like Hat Kid’s hats from A Hat in Time.

Speaking of which, the most useful one are the sprint horns, which, yes, function exactly like Hat Kid’s sprint hat. I will say, the other horns aren’t usually super useful. The last set of horns is quite expensive and I had to do a fair amount of extra searching to find enough unicorns to afford them. When I finally acquired said horns, I was disappointed by how profoundly useless they were, despite having a ton of potential.

Naturally, you’ll also find general collectibles that act as currency, primarily used to buy Nate and Nugget new outfits. You can also find additional outfits in suitcases out in the hubs. The outfits are variable and pretty great. There’s even one that dresses Nate like Pumpkin Jack, which is rad. It’s worth noting that Hell Pie is a good deal better than his eponymous game, though. There’s a good chunk of content to work through here, too. I found all of the ingredients and bought all of Nate’s skills, which took eight and a half hours altogether, which is pretty good for a game made by just a few people.

I do have a couple of issues with Hell Pie, but they’re semi-minor. Sometimes I feel like the chain swing isn’t as responsive as it should be, and losing all momentum and plummeting when you swing into a surface is never fun. There’s also a level in the second hub where you’re running from a boss a la Crash Bandicoot, which is the only part of the game that I’d describe as awful. Aside from these, though, you’re not going to find many other 3D platformers that succeed as wildly as Hell Pie does. If you’re even somewhat fond of the genre and enjoy some edgy humor, this is a game that’s more than worth picking up.

Hell Pie is an entertaining, colorful 3D platformer with a lot to offer to genre fans.

Mojang announces NFTs are ‘not permitted’ in Minecraft