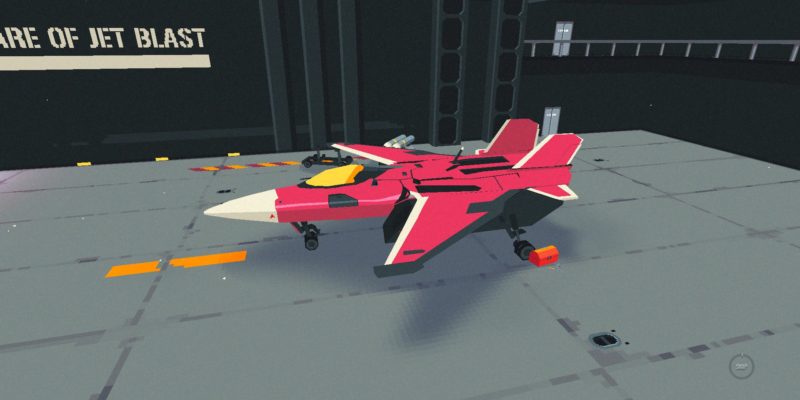 The path to gamerhood is paved with arcade shooters. A lifetime of classic shoot ‘em ups and browser browser-based bullet hells have cursed us with a discerning eye for quality in the subgenre. Peppering planes and procuring points has grown quite stale, believe or not, but Jet Lancer promises more variety. And, it delivers, at least where it really matters.

What could you possibly do to rejuvenate one of gaming’s oldest, most storied genres? Developer Code Wakers found its answer not in innovation, but in character. Jet Lancer draws from its thousand and one influences to generate a smorgasbord of incredibly stylish, high-octane gameplay moments. Chief among its many inspirations is mecha, which informs its visuals, gameplay, narrative, and beyond. It’s an experience that’s absurd in all the best ways, even if its futuristic dogfights don’t introduce anything new. 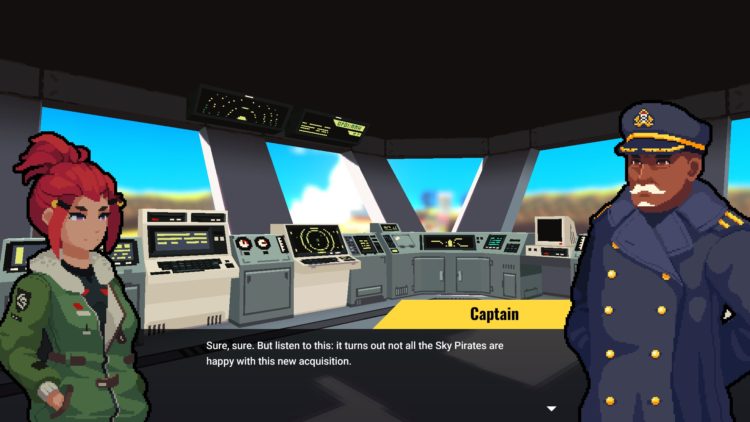 Inside the cockpit of an experimental fighter plane is where you’ll be spending most your time, assuming control of ace pilot Ashlyn. Ash is just one member of the motley crew of misfits that take center stage. It’s rare for an arcade shooter to place so much emphasis on its narrative, but much like its cast, Jet Lancer isn’t about to fall in line. Dialogue is delivered via text boxes between and during combat operations. While the fairly rigid mission structure doesn’t provide the most optimal framework for delivering a story, sharp writing and grandiose combat encounters certainly get across the point.

High-flying, 2D ship shooting has been done a million times over, but Jet Lancer’s simple and striking pixel art offers a fresh coat of paint that brightens up the battlefield. Its diverse soundtrack complements the game’s myriad set pieces and story beats with equal success. Every explosion is a celebratory firework — crunchy, colorful, and makes every kill immensely gratifying. Like Luftrausers before it, every action and outcome that follows is satisfying to the senses and rewarding to master. 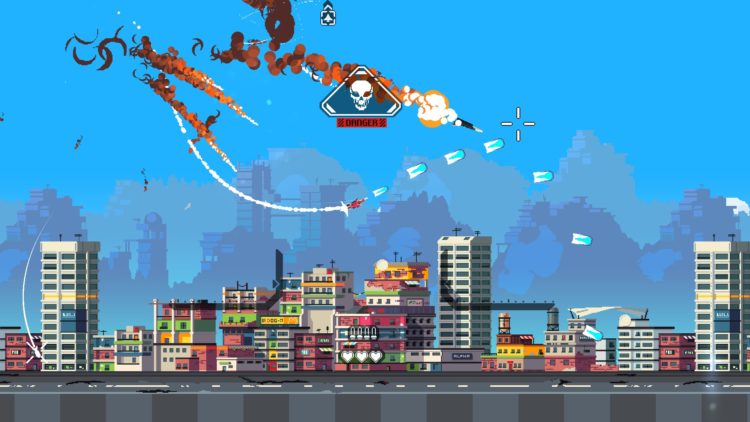 Dogfight with a view.

There’s flying, there’s shooting, and then there’s unleashing endless barrages of missiles against unsuspecting foes. As expected of an otherworldly, experimental super plane, Ash flies fast. Controlling the plane takes a bit of effort, especially when faced with the constant threat of smashing into the ground or zooming out of bounds. The afterburner cranks the speed up an extra notch to escape the most persistent of planes, but is prone to overheating after prolonged use.

Combining tight maneuvering and the afterburner opens to the door to a host of tactics that you owe it to yourself to pull off at least once. Nothing beats the thrill finessing enemies into nosediving straight into the ocean. The ship’s primary fire is a classic machine gun that gets substantially harder to line up targets with as enemies quickly get smarter. New enemy types are faster, more agile, and know how to find their way into your blind spots. 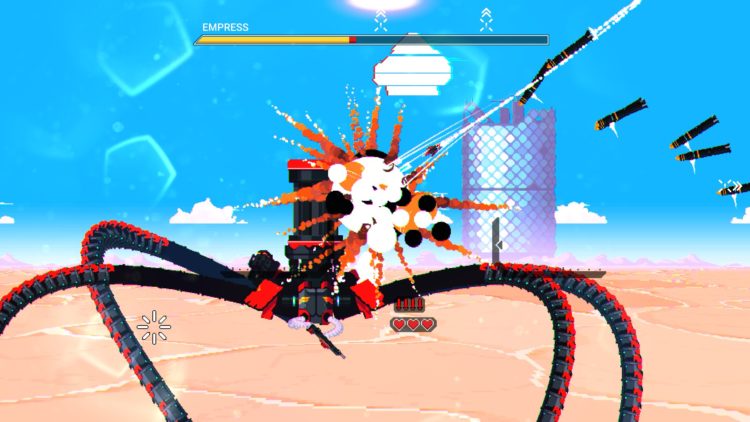 Dealing with spiders the proper way.

To deal with such pesky annoyances, a secondary fire launches missiles and other explodes to get you out of any tricky situations. Likely, this is what secures you the most kills. A charged fire is your final ability, wiping out screenfuls of enemies. Before, however, of its lengthy cooldown.

As you clear operations, you unlock new weapons and upgrades for your fighter plane to modify not only your combat capabilities, but your difficulty as well. Downing bosses unlocks new secondary and charged fire alternates straight from your favorite sci-fi movies. The plane also takes four upgrades from a much longer list of options, unlocked by clearing operations. Certain upgrades automate more challenging tasks, others reduce your plane’s capabilities in exchange for boosts in other areas of combat.

Between operations, you’re treated to an additional dimension courtesy of Jet Lancer’s 3D overworld. Though there’s nothing but plain plains and barren waters, the change in perspective is refreshing. It’s largely a quick gimmick but I can’t deny a certain level of charm. From the overworld, you can drive the plane carrier to new operations, or try for better scores on the game’s 40(-ish) levels. 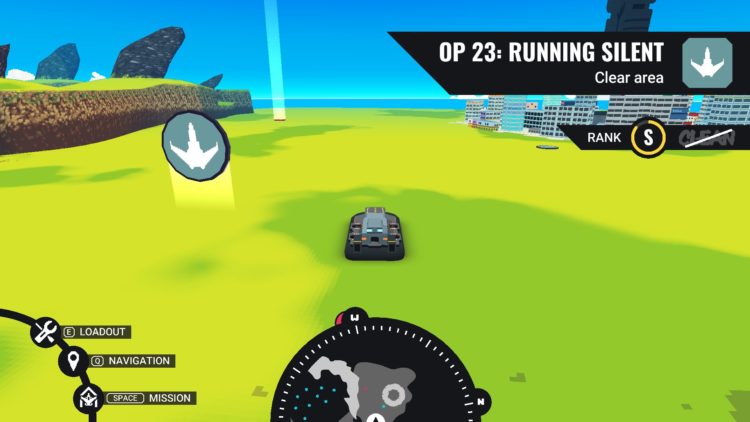 Each operations should burn no more than a few minutes, provided your piloting skills are in tip-top shape. Certain operations, particularly score attacks, took me a number of tries before I could snag that clear. Regardless of type, aggression is the key to success; offense is absolutely the best defense in Jet Lancer. Despite the attempt at operation variety, most demand the same strategy: hunt down active enemy planes, avoiding the actual objective in the process.

Boss battles are the true highlight of the experience, featuring the only machines that could hope to compete with you in flashiness. While not necessarily difficult, especially when dodge roll continues to work miracles, their vicious and unique attack patterns give you more to consider when engaging them. Many lack the mobility of a supersonic jet as well, meaning that taming your plane and mastering the art of the bombing run becomes more important than ever. The few faster bosses push your maneuvering skills to their limits.

For extra challenge, Jet Lancer offers New Game Plus which amps up the enemy count and introduces trickier enemy types earlier on. Take on every combat operation a second time with all your upgrades. For those (read: me) struggling to adjust to the increased difficulty, or in need of some accessibility options, the game lets you adjust parameters like health, invincibility frames on dodges, and more. There’s not traditional, fixed difficulty options, instead allowing players to modify their experience through plane customization and adjusting parameters. 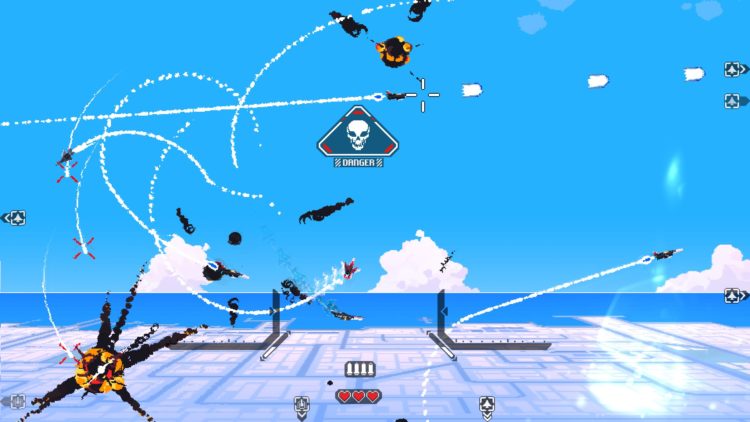 There’s something innately therapeutic about taking to skies to save the world from belligerent AI planes. A few operations a day might be exacting what the doctor orders. Jet Lancer’s moment-to-moment gameplay is, besides from being a feast for the senses, rewarding and enthralling. Although its varied objectives don’t translate to varied playstyles, the fast-paced, aggressive nature of the game is more than enough to entertain. The first playthrough clocks in at around four hours, but with New Game Plus and high scores to collect, a pilot’s job is never done.

Jet Lancer is a souped up arcade shooter made for quick bursts of adrenaline-pumping aerial action. For those raised on Saturday morning cartoons and after-school arcade sessions, Jet Lancer is a childhood pipe dream come to life.