At first glance, developer PQube’s Kitaria Fables looks to be another Stardew Valley-inspired RPG. It shares a lot of the genre mechanics established by Stardew such as farming, mining ores, and upgrading equipment. But beyond the familiar gameplay loop, that’s about where the similarities end.

Whilst Stardew Valley is more of a farming lifestyle simulator, Kitaria Fables is undoubtedly an action RPG. Combat reigns supreme, and most of the game’s progression revolves around killing monsters. Because of this, it’s likely that Kitaria Fables will appeal more to fans of combat-oriented RPGs like Monster Hunter than farming sims like Stardew Valley and Sun Haven.

Our story follows Nyan, a soldier from the capital. He and his partner Macaron have been sent to protect a nearby community in Paw Village. The village practices magic, which is an art banned by the kingdom long ago. Nyan learns about magic and decides to use it to fight the monsters and strengthens his kingdom’s chance of winning. However when higher-ups in the kingdom catch wind of this, problems begin to arise.

Don’t expect Bioshock levels of writing from Kitaria Fables, but the overall narrative is enjoyable. You can tell this game was created with younger and casual players in mind, and honestly there’s nothing wrong with that. It’s a light-hearted story that doesn’t need to be taken too seriously. 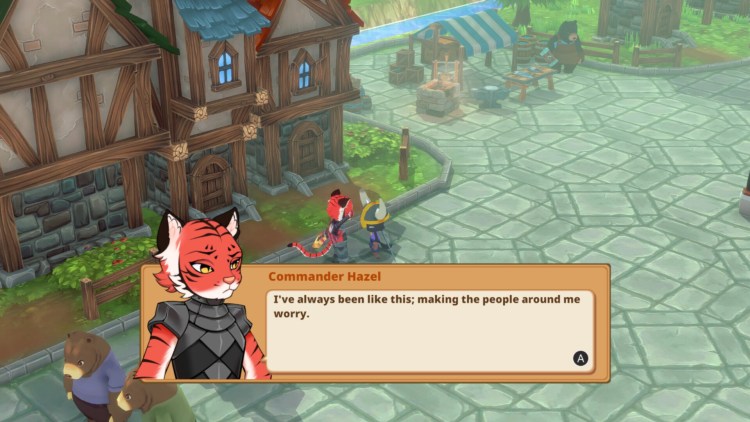 In saying that, if this is supposed to be a casual game, then the lack of direction provided is questionable. There are multiple points during Kitaria Fables‘ story where I found myself getting lost. Not lost on the map, but rather stuck with no clue what to do next.

During quests, the game does a good job of providing enough details in the quest description to figure out where you have to go. Yet, after finishing a quest there’s usually little to no hint. If you’re lucky, the next quest will unlock instantly. If you’re not, then have fun wandering around the whole map looking for the provider of your next quest. 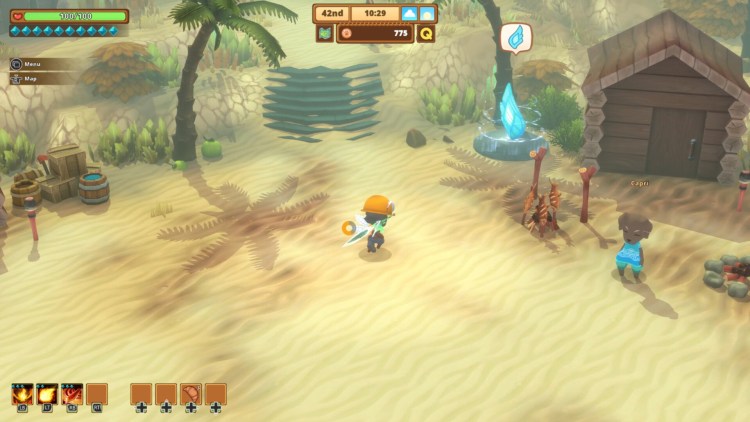 To make matters worse, a lot of the interactions in Kitaria Fables are time-gated. More specifically, certain quests are only given out at day while others are only handed out at night. Kitaria Fables make no effort to inform you about this. It’s possible to walk past the NPC who should give you the next quest without knowing, as they may only offer it during a different time of day.

I understand the desire to push players to explore your world, but the way this is implemented in Kitaria Fables just isn’t rewarding. As a player, I want the world to encourage me to see more. Instead, Kitaria Fables forces this on you by not providing enough information. It’s frustrating, and definitely took away from an otherwise fun story.

With combat being such a huge focus of the gameplay, it’s important that it feels just right. The main premise of combat in Kitaria Fables is to deal damage while dodging incoming attacks. Nothing unique by any means, but this design is a tried-and-tested method that has worked many times before.

The dodging half of the combat requires you to perform successful dodge rolls. This is effectively a more forgiving, family-friendly rendition of the typical roll-to-dodge system seen in other difficult action games like Enter the Gungeon. It’s all about seeing the enemy attack and moving out of the way. Simple, but it works well enough. 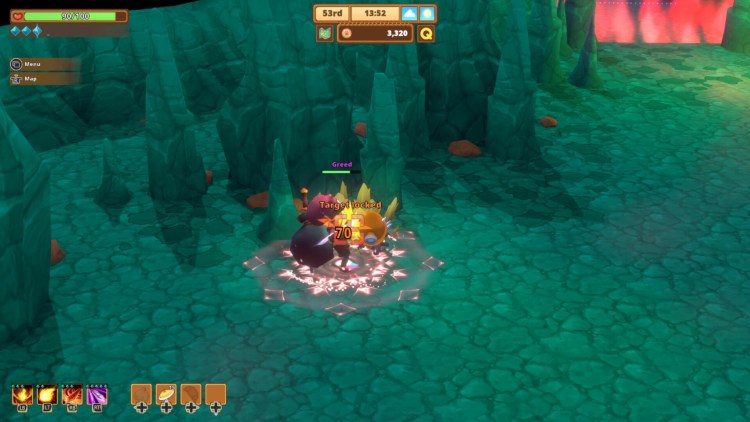 Dealing damage relies on the use of a sword, casting spells, or firing a bow. The sword and bow both have a basic attack that charges mana on successful hits. This mana can then be spent on casting magical spells and other combat abilities that hit especially hard. I found that the most effective strategy for most fights is to poke at a distance with a bow and then use the stored mana to cast spells.

Melee is perfectly usable, but puts you at unnecessary risk. Most enemies have predictable long-range attacks that can be dodged with a quick roll. But at close range, these attack patterns vary more, making it likely that you’ll take damage. I think it would have been nice to see different damage types vary in effectiveness based on an enemy’s weakness. Without a weakness mechanic, combat gets rather repetitive. Once you’ve figured out a go-to strategy, there’s little motivation to try anything else.

Put your back into it

A good chunk of the difficulty in Kitaria Fables comes from its hefty grind. Although the combat itself isn’t overly difficult, some monsters will still destroy you if underprepared. To work around this it’s important to improve the weapons, armor, and tools used.

However, most substantial upgrades require an awful lot of grinding. For example, getting the Immortal Sword requires both a Forest Guard Sword and 75,000 Paw Pennies, the main currency used in Kitaria Fables. 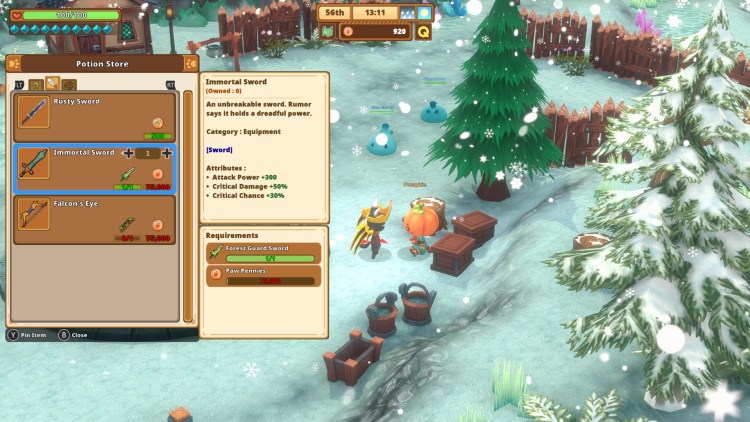 The Forest Guard Sword can only be acquired via a golden chest located at the Mountain Tunnel Entrance. This requires a Gold Key, which itself needs three Gold Ingots, 10 Ironstone, and 1,000 Paw Pennies. It’s five ore per ingot, so you have to mine 15 gold ore. Ironstone can only be acquired as an uncommon drop from orcs and golems. Based on my testing, it takes around 30 kills to acquire 10 Ironstone.

And then the real grind begins, as farming 75,000 Paw Pennies is going to take some time. The best method is probably to sell rare boss drops, which requires farming one or two bosses over and over until you earn enough. Farming can be used to make some extra money on the side, but this isn’t as profitable as it probably should be. 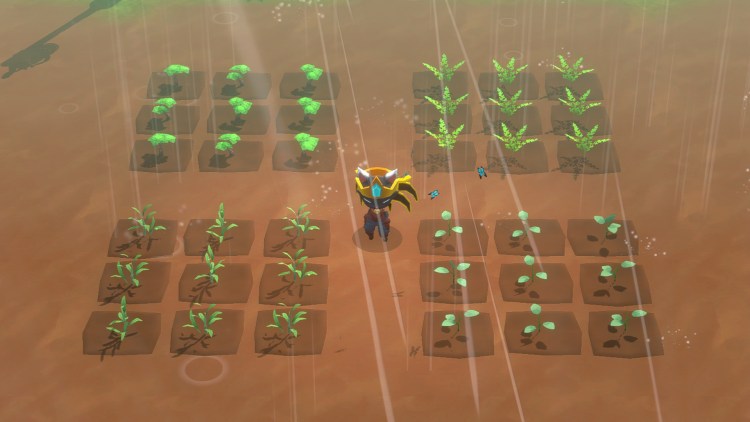 Even after finishing that grind, all you’re left with is a strong sword. There’s still an armor, helmet, and accessory slot that requires a similar level of grind to upgrade to the same level. The result of this gameplay loop is that I spent more time grinding out equipment than completing quests.

Technically, the combat mechanics make it possible to never take damage, so I guess it’s possible to skip upgrading entirely and just fight with weaker equipment. This would result in some boss fights being miserably long, though, so I don’t recommend it.

Kitaria Fables takes advantage of a characteristically indie art style. It’s cute and simple, with PQube opting for colorful visuals over high-definition textures. Being only a three-person studio, anything more ambitious than this would have likely backfired. I think it looks good and fits the game’s overall spirited feel. 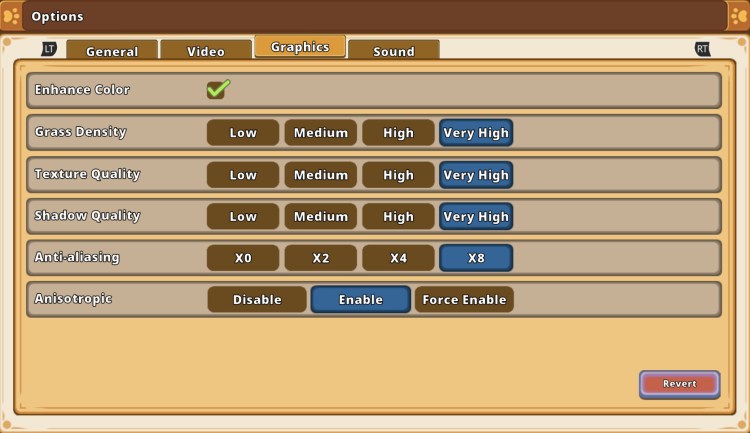 As for performance, on an RTX 2060, Kitaria Fables managed a constant 120 fps at 1440p and max settings. Of course, an accessible indie game like this can run well on a far weaker machine. The developer’s recommendation of only a GTX 960 suggests that this should run on just about any modern PC.

Kitaria Fables is a solid game given its small development studio. Its lighthearted and fun story, coupled with its enjoyable combat, make it worth playing. The charming visuals also give it that distinct indie feel, of which I can never get enough.

It’s by no means perfect, though. At times the grind gets tiresome and starts to take away from the other parts of the game. Even worse, having to spend half an hour trying to find where the next mission is can genuinely ruin the whole experience. The lack of direction provided at times is frustrating and unnecessary.

When Kitaria Fables works it works really well. But when its issues begin to arise, the experience of playing through it can get awfully frustrating. These unnecessary design oversights detract from the game's clear strengths. Regardless, it isn't bad, and given its relatively cheap retail price, it is probably worth giving a shot.