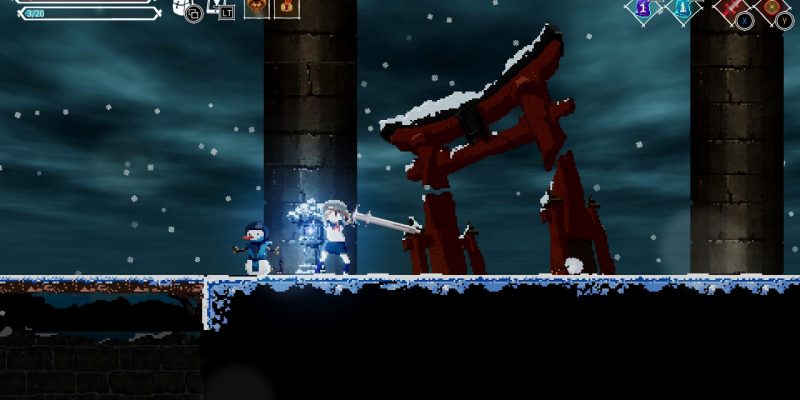 I’m all for Metroid-likes trying something new. Too much of the time they tend to regurgitate familiar ideas. Lost Ruins appears to want to try things differently, with a stronger emphasis on survival and careful play. But there’s a problem: it’s simply too afraid to commit, which ends up making the game’s main unique feature more of a passing idea than an actual focus. The visuals are pleasing, plus I do appreciate some of what the game attempts. But it’s also short, weighed down by poor combat, and surprisingly reliant on elements lifted from Castlevania: Symphony of the Night.

When you first start a game in Lost Ruins, it’s quick to tell you that this is a survival experience. And that appears to be true for the first half hour or so. Enemies do a lot of damage and save points don’t heal you. You’ll need foes to drop healing orbs or eat food that you’ve picked up. Enemies aren’t around in great numbers, but the almost survival horror-level emphasis on reducing damage and managing your supplies scratches a certain itch. Traps abound, meaning that I was reloading my saves to get through with minimal damage, all the while carefully hoarding important resources.

However, it doesn’t take long for Lost Ruins to abandon this pretense. Early on, there’s an opening in a wall that can be reached while falling. The room contains a weapon that’s powerful enough to dispatch enemies in a hit or two. It’s quite easy to see, and it shows up clearly on the map. Shortly afterward, I rolled into another obvious “hidden” room while moving down an elevator. Once inside, I found an amulet that restored one hit point per second. With just these two items, the danger evaporated. I didn’t have to use them, it’s true. But the fact that they’re even here in addition to them being so easy to find shifts the balance. Plus, those aren’t the only boons the game throws you. 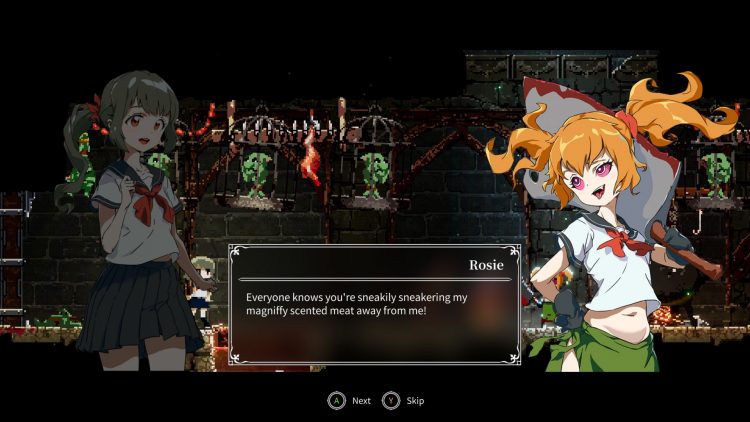 After that, I didn’t see any point in being careful. Not that the rest of the game was a cakewalk, mind you — it’s certainly far from difficult. There’s no invulnerability time after taking damage, so your character can be annihilated in the blink of an eye. Honestly, the vast majority of Lost Ruins’ challenge comes down to “enemies do a ton of damage very quickly.” Even without those two aforementioned items, however, the game doesn’t take all that long to show that its so-called survival focus is misleading. I constantly found food, and there was a stronger weapon to obtain later regardless.

It honestly feels like a missed opportunity to me. With a complete focus on survival, Lost Ruins could have stood out more. Instead, it feels perfunctory. It’s a solid game, but it doesn’t have much to offer over any similar titles. For one, the combat isn’t noteworthy at all. Melee attacks come in two forms: stabbing weapons and overhead slashing ones. The overhead slashing weapons are slow, have poor range, and are just overall tedious to use. The stabbing weapons, on the other hand, are weak and also have poor range. There’s a dearth of weapons available, meaning that you’ll be sticking with the same ones for almost the entire game.

There’s also magic. You can purchase or find spells throughout the game, but MP is just like HP, save for the fact that it never gets restored automatically. Whenever you use spells, you’ll need to refill your MP with items. At least until you get the amulet that works just like the life one, which allows you to use magic more freely. There’s a lot more variety to the magic attacks, but your mana capacity is so limited and spells consume so much MP that I mostly focused on using melee weapons. There simply isn’t a good balance to any aspect of the combat. 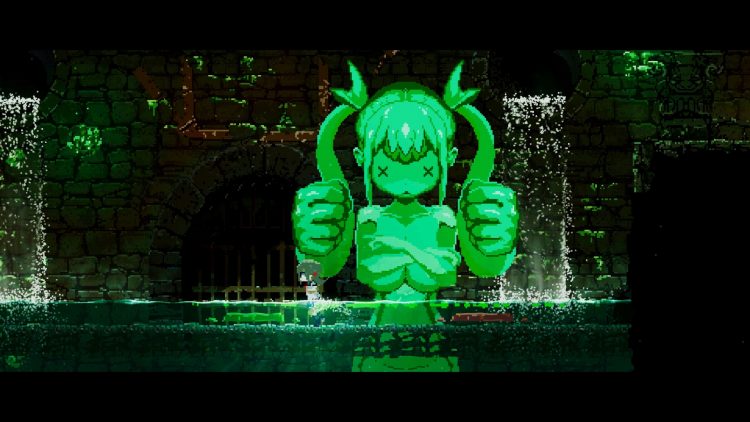 It also doesn’t help that the game world is so small and linear. Lost Ruins takes three to four hours to beat, even if there are a few endings (one of which is locked behind a higher difficulty). There are also additional modes, such as ones that limit what kind of attacks you have access to, so there’s some replay value. But you don’t find new abilities, really, so one of the best aspects of Metroid-likes is underrepresented here. There is some backtracking, though, as you’ll occasionally come across a sort of puzzle that you can’t solve with your current spells, or perhaps you’ll be able to make it through a trap more easily with the right accessory.

There are sidequests in Lost Ruins, but I rarely felt compelled to do them. When I did, I felt that the rewards weren’t worth the effort. The puzzles also aren’t all that interesting, nor is the level design, which leans too hard on generic dungeon corridors. Of course, there’s not much reason to fight enemies, as they drop little of value and there’s no experience system. You can just run past foes a fair amount of the time. At least I enjoyed the artwork while doing so, however. The sprites are detailed and colorful, with some of the bosses being especially impressive.

But the bosses are also home to some of Lost Ruins‘ main frustrations. Honestly, none of them are difficult, especially since you can either use the healing amulet or spam food if you’d prefer. Just like with the normal enemies, almost all of the challenge comes from the amount of damage they do, or simply picking the right item combination. Nearly all of the bosses are monster girls with two phases. Neither phases pose much challenge once you figure them out, but while you’re doing that, the game’s fondness for killing you nearly instantly can get on the nerves. 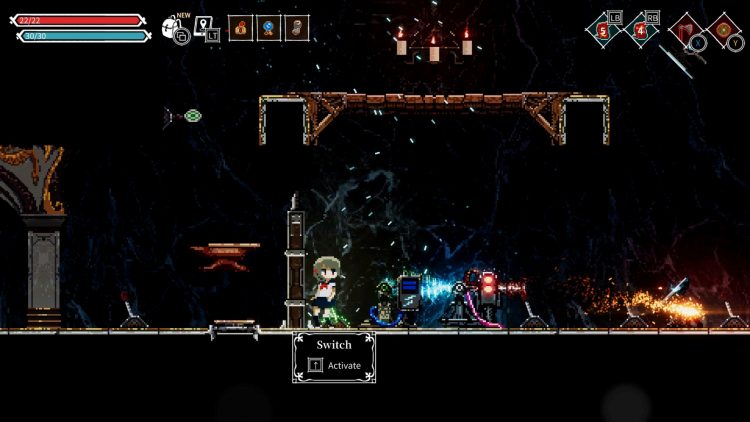 All of the bosses are also wearing schoolgirl outfits and they often transform into scantily clad monster women. Once you defeat most of them, they tend to drop underwear that makes you stronger. Yes, the main character can change into a school swimsuit to move faster in water. At least the character artwork during dialogue scenes is of high quality. The writing is solid, too, as is the English translation.

Ghost in the Ruins

I wanted to like Lost Ruins, but I just didn’t find much to make it worth playing over similar games. It looks great, but it throws overpowered items at you, plus it’s short, simple, has underwhelming combat, and can be lazily puerile. It’s not without its enjoyable parts, but it simply doesn’t do what it needed to in order to rise above mediocrity. There’s nothing bad here, but I don’t think I’ll be going back for more regardless.

The visuals are strong and most of the elements are competent, but this is a middle-of-the-road game that squanders its potential with some baffling decisions.