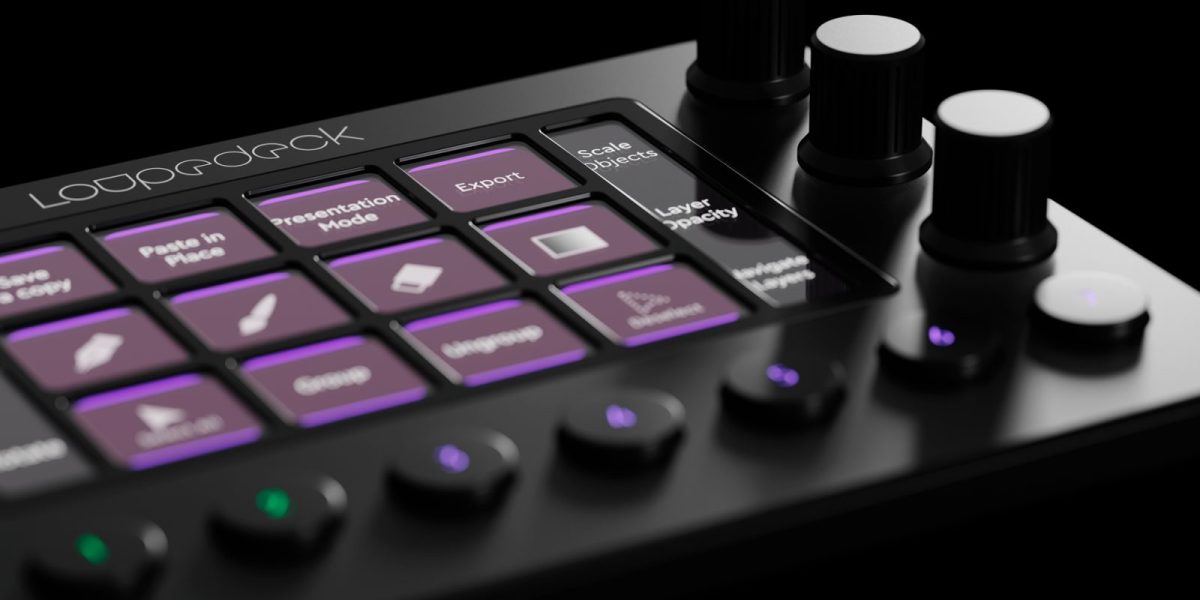 The Loupedeck Live is one impressive piece of hardware. A simple-looking companion console that is anything but, the Loupedeck Live expands productivity in ways that many could only dream of.

Think of it as keyboard macros ramped up to 11. It’s along the lines of the popular Elgato Stream Deck just with much more flexibility, albeit with a higher price ($269). If new ways to interact with your PC is important, then this might be the product for you.

Out of the box, you’ll notice how small the device is for what it offers. The Loupedeck Live sits 1.3 inches (H), 5.9 inches (W), and 4.3 inches (D), and weighs in at 230 grams. Despite it’s smaller size, don’t think it’s cheaply built. It’s a sturdy device that even withstood a 3-year old knocking off a desk about 4 feet to the floor without even a scratch.

On it is a 4.3-inch LCD touchscreen, eight RGB backlit buttons, and six dials with push buttons. A removable USB-C cable is included for connection along with a USB-C to USB-A adapter for those that need it. To use it with your machine, you’ll need either Windows 10,Mac OS 10.13, or higher. Overall, the Loupedeck Live is a bit larger than the Stream Deck, but only about half the size — and price — of the Loupedeck CT.

Once hooked up to your PC, the fun really begins. The device requires the Loupedeck software in order to configure the console and operate it at all.

The software can seem extremely daunting to many first-time users. Whereas the competing Stream Deck software is quick and simple to grasp, Loupedeck’s software takes some time to get used to. 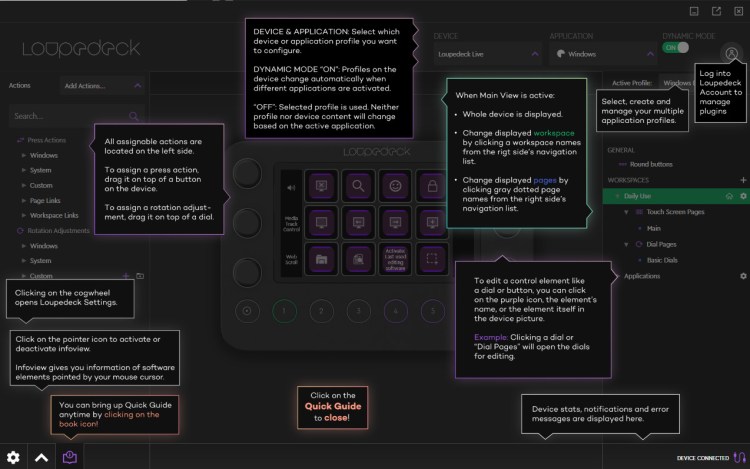 A on-screen guide greets you upon first launch

When you load up the Loupedeck software, an on-screen guide greets you to show you around. You’ll see your device in the center with available actions on the left and workspaces on the right. Your workspace is your layout of custom tasks set using actions. Each workspace can have multiple pages that you can bounce to whenever you want.

Aside from those presets, you are able to add almost any application you’d like to the list to create a workspace for. From there, it’s taking advantage of the ability of the console.

Once you have the software down, the Loupedeck Live becomes even more valuable for almost every task at hand. Each key can be customized for simple tasks like saving a file in Photoshop or switching your scenes in OBS.

For example, if you are working in Adobe After Effects and you want to easily move frame by frame, the dials on the Loupedeck Live allow that to happen. If you want to quickly set your ease in/out animations, you can do that with a tap of a button. When I say it makes things quick and easy, I mean it. Even with concerns going in about the touchscreen, it’s impressively responsive. You can even set a vibration pattern to give you confirmation feedback when you hit a button.

Despite all the features, the Loupedeck Live falls short in a couple areas. First, the lack of customization for the premade actions on the touchscreen is disappointing. Instead of having logos or custom images for the action, you are stuck with text or default icons. If you want to replace it with custom icons, you’ll have to create custom action commands. It’s not the worst thing in the world, but it’s annoying recreating actions already available. 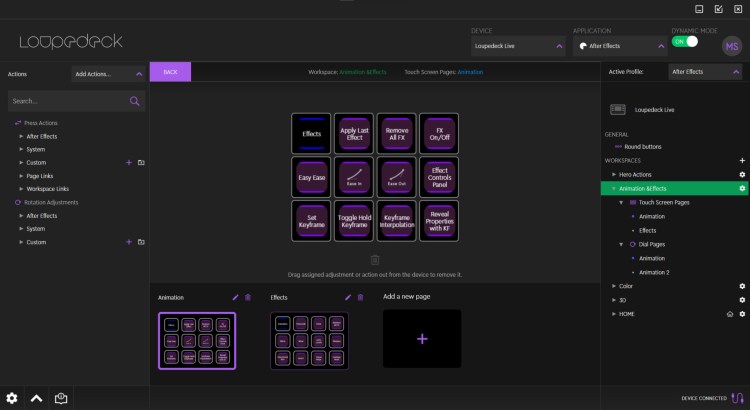 There are plenty of options to choose from for the console

Another issue is the software will swap to a different profile despite you not wanting to. Usually it only happens when trying to use OBS (open broadcast software) or Streamlabs OBS. When you open a game, the software will go back to the default system workspace. You then have to tab back into the streaming software and manually click back into the game. Again, annoying and tedious, but not the worst problem in the world.

Lastly, if you like to use your console for soundboards, the Loupedeck Live may not be for you right now. Instead of just assigning an MP3 or other audio file type and playing it, the Loupedeck software opens an audio player, which will minimize the game or software you are in when you press the button.

Luckily, these issues can be fixed in future firmware and software updates. Until that time comes, however, you may want a different option.

Loupedeck Live: good for many, but not all

Simply put, the Loupedeck Live is a great option for anyone needing more than the basic macros on their keyboard. Whether you are editing videos and need a scrubbing dial or even just want something for quicker shortcuts to open software and folders, there’s really nothing the Loupedeck Live can’t make easier.

Assuming you want to use it for only streaming, you’d be better off elsewhere for now. There’s just a bit too much missing for it to surpass the Stream Deck in that regard.

But if you need the added functionality like the dials and can look past the aesthetic limitations and profile hiccups when streaming, the Loupedeck Live’s value will certainly exceed its entry barrier.

The Loupedeck Live is a great little device for those needing more flexibility while working. For the media editor, it's bordering on the must-have side of the spectrum, but streamers may want to hold off until a few updates are released.

By Jason Rodriguez13 mins ago
Reviews