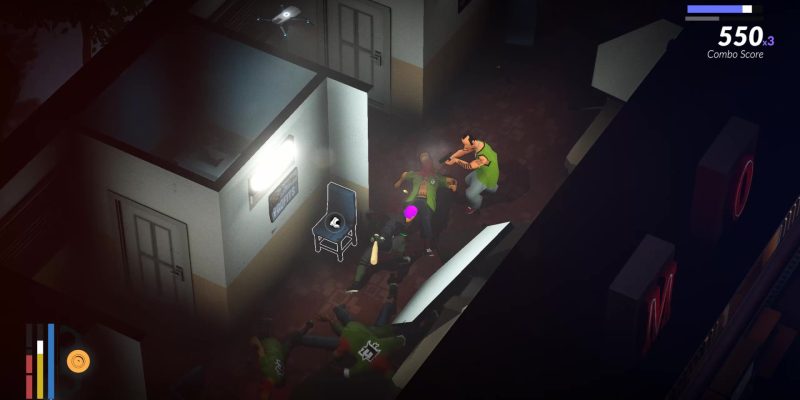 There are few video game genres I find more cathartic than the beat ’em up. I mean, what better way to end a hectic day than to knock around an army of street punks? If you feel the same, Midnight Fight Express is cathartic; the bone-crunching combat, along with the thudding soundtrack are great for winding down. However, don’t expect the game to wow you with innovation.

Midnight Fight Express is like a mashup of the genre’s greatest hits. You fight your way through waves of enemies in the streets, on rooftops, through the sewers, and, of course, on an elevator. The combat is a blend of light and heavy attacks, with melee and long-range weapons. There’s also a more forgiving version of a parry system inspired by the Batman Arkham series. If you’re a fan of brawlers, Midnight Fight Express feels like bits and pieces of just about all of them.

But that familiarity is hardly a critique if that’s what you’re looking for. If so, the game will wrap around you like a warm, comfy blanket. Well, a blanket covered in blood and broken teeth, but hey… it’s still cozy. That’s how I felt running through the game. As a person who spent years raging on streets in one final fight after the next, Midnight Fight Express delivers. 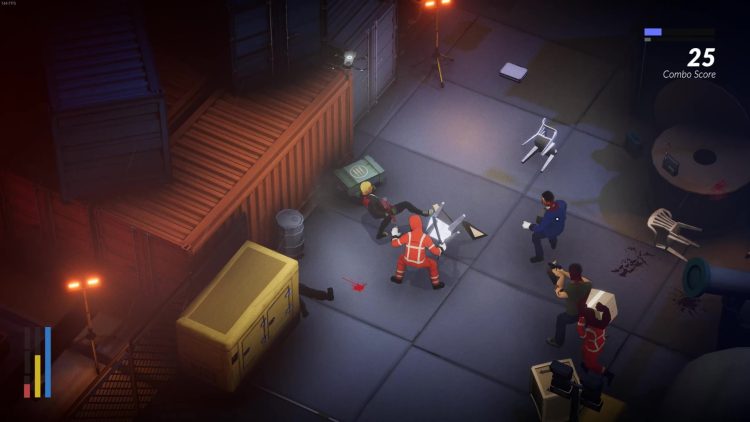 Your killing skills ramp up gradually over time. At first, you start off with some light attacks or a charged attack against blocking foes. But with points you get after each roughly six-minute mission, you can upgrade and learn new skills. The game features six skill trees that cover melee moves, parries, and finishers. As you make your way down, it’s hard not to notice just how deadly you become — nor how fun it is to show off your killer new moves.

You unlock a secondary gun early on, which fires one bullet before needing to recharge. Upgrading it lets you change the ammo type to electricity for a taser-like effect, or a hypnotic bullet to force one enemy to temporarily fight for your bloody crusade.

The skill climb feels good in Midnight Fight Express: not too slow or fast. By the time you’re halfway through the game, you should already be tossing enemies over rails, parrying and finishing with brutal knife slashes, and tossing enemies into groups. Combined with a dodge roll, you’ll find yourself suplexing one enemy before knocking the pistol out of the hand of another. Dodging through the weapon while pressing the grab button puts the gun in your own hand, letting you mow down the next few punks with a death wish. The action gets broken up by a few driving levels, which see you on a jet ski or motorcycle. 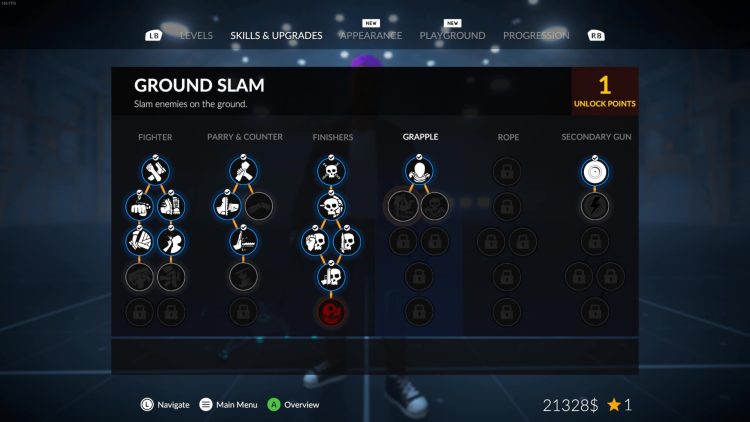 Blood on the streets

Combat is exciting in Midnight Fight Express. From the animations of enemies as they recoil against your heavy blows, to the way the camera slightly zooms in to offer a closer glimpse of a finisher, it feels good to be this badass. And the better you perform, the more deadly you become.

A Rage meter increases based on how well you take out foes. At max, you go into Rage Mode, upping your damage and causing enemy heads to literally explode. Yes, it’s kind of cool. Although, I would have preferred leaving Rage Mode to a simple button press. More than once it activated with only a couple weak enemies remaining, which was like trying to start another bender after the party died and everyone was going home.

Some may compare the game to the recent Sifu, but they’re not completely alike (even though you can kick chairs at people). While the combat animation of MFE is good, it doesn’t quite compare to Sloclap’s kung fu opus. Nor is it as pain-inducingly hard, as Midnight Fight Express‘s normal difficulty is on par with other games in the genre. Well, usually. 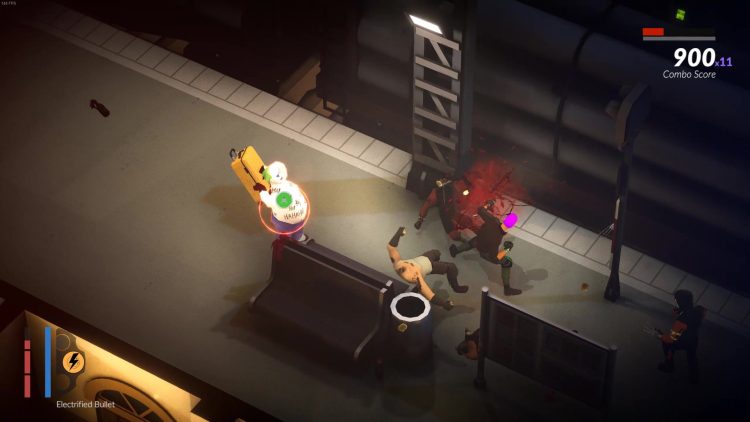 If I would offer any major complaint with the game, it would be the rare moments of unusual difficulty spikes. A late-game boss fight had me raging as he kept insta-killing me with a weapon from offscreen. In an earlier level, I had to fend off waves of angry bikers armed with melee weapons and guns as another rode around on his bike stunlocking me with every nudge. The guy on the bike would slowly circle around, exploding in a massive fireball if he brushed against a wall. I finally managed to survive long enough to get saved by the cast of Hotline Miami — no, that’s not a joke. The game is filled with references, ranging from Fight Club, to Grand Theft Auto, and (of course) Portal.

I know this guy

The references certainly add to the overall familiarity I felt with the game. But, as mentioned before, that’s not necessarily a bad thing. Sure, Midnight Fight Express doesn’t break new ground. However, it doesn’t really need to. It’s the perfect kind of game for beat ’em up fans to burn away some stress.

One thing I did find refreshing was the wide range of varying enemy types. The developer could have easily leaned on the old trope of using color-swapped enemies with juiced-up stats. However, across the 41 levels, you’ll see quite the spectrum of foes under a new boss to track down. You start with the typical street thugs, but soon you’ll find yourself facing down knife-wielding lunatics or dodging fire in the middle of a gang war. Armed Russians naturally make an appearance, as well as killer clowns and even zombies. There’s no getting bored with this roster. 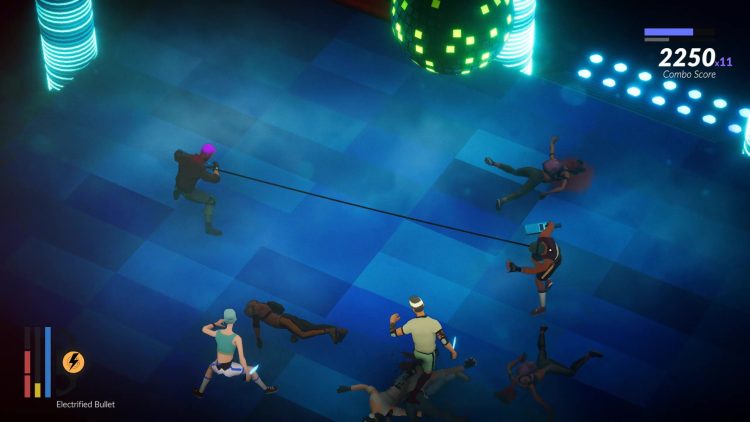 However, I did find myself nodding off a bit to the story. Typically with beat ’em ups, the background story exists to add context to the violence. In Midnight Fight Express, you play as Babyface (fully customizable in an in-game menu) as he’s retelling the story to a couple of cops while in custody. Throughout the journey, Babyface remains silent, relying on a flying drone companion named Droney to chatter away in his stead. The game includes plenty of turns and twists, peppered with the reliable amnesia trope. But it’s mostly forgettable and overshadowed by the thrill of the hunt.

Indeed Midnight Fight Express works best not as a vehicle for drama, but more like a plate of delicious fast food. It’s filling, familiar, and satisfies your cravings for a damn fun brawler.

Midnight Fight Express is a beat 'em up that should feel familiar to genre fans, but does things so well that it doesn't matter. Fast and brutal, the game is a satisfying and bloody journey of revenge.