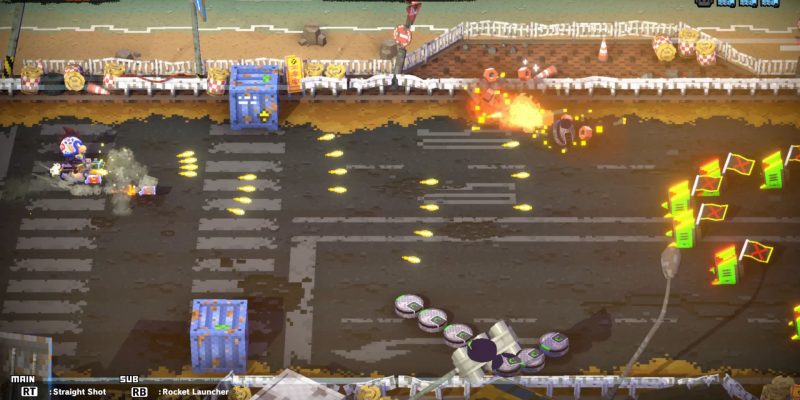 The primate-inspired shooter, Monkey Barrels, is finally making its way to PC after over a year of exclusivity on the Nintendo Switch. Are you ready to shoot the lights out and smoke an assload of home appliances in the process? I genuinely wish that last sentence were a joke, but here goes nothing.

The narrative origin of Monkey Barrels is bizarre to say the very least. A wealthy tech executive named Dr. Echizen Crabbenwold has decided that ruling the markets with an iron fist isn’t enough for him. He always had aspirations that resided more in the diabolical avenue of weapons engineering. While you can’t exactly turn a consumer electronics company on its ear and pursue military contracts, he decided to take a slightly more nefarious route. Crabbenwold instead opted to sneak a battle chip into all of his company’s home electronics products.

After years of waiting as a sleeper cell in homes around the world, Crabbenwold eventually pulls the trigger on his plan to take over humanity. Armed with every blender, television, and microwave in the world, it doesn’t take long before this mechanical uprising has turned all of mankind on its ear. Somehow, they managed to damn near take over the world and wipe out all of humanity in the process. Talk about a bleak outcome. And this is only the pre-roll cinematic!

With all of the pesky homo sapiens now residing under a 6-found mound, animals have taken over the smoking husk that was left in the aftermath. Crabbenwold, on the hunt for new subjects for his most recent experiments, is attempting to now create militarized animals (this is, of course, after he takes over the world). One of the first candidates that he comes across is a handful of primates, who are just happily living their lives and minding their own business. Little did he know that the first critter he kidnaps has a very dedicated set of friends, that will not rest until their friend has returned home safely. 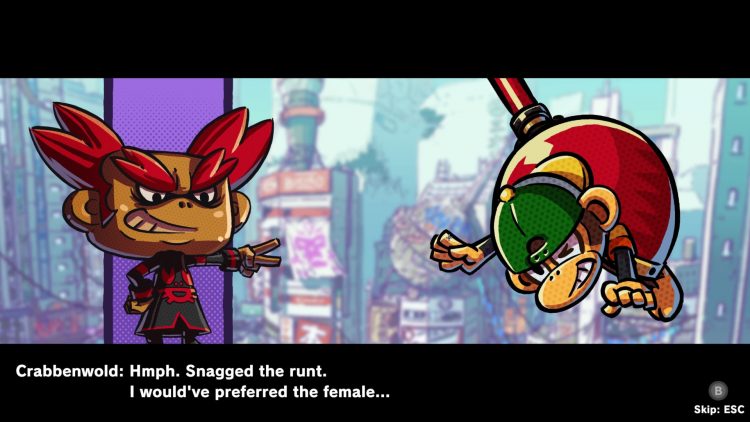 Once the action of Monkey Barrels kicks off, it becomes fairly apparent that the aesthetic used for cinematics and the actual gameplay are drastically different. The hand-drawn art style of the cinematics is put on ice, in favor of a more top-down, traditional shooter presentation. The one catch is that there’s a pixelated filter overlaid on everything but the HUD. I found this to be a fine transition, because it was rather charming and suited the gameplay well. The action, however, left a bit more to be desired.

After selecting weapons, you are set loose on 22 startlingly large stages. Attackers can take on the form of a wide variety of different home electronics. Who knew that microwaves and televisions had the ability to suddenly sprout gun turrets? Don’t worry, it isn’t supposed to make sense. Trust me, I tried. My personal favorite was playing through a level where robot floor vacuums are deadly enough to make your life pretty damn difficult. How a vacuum can harm a primate is a bit beyond me, but that is just the first of many head-scratcher moments in Monkey Barrels. 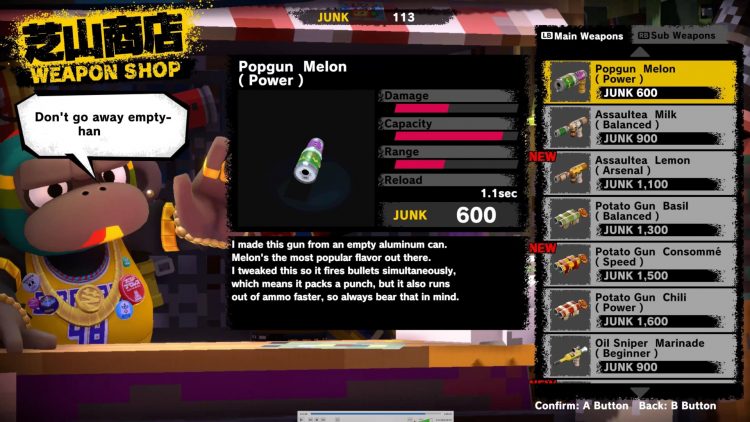 Each enemy only has one way that they can cause damage to the main character, and they have about as much mental capacity as a cinder block. They will simply follow the same path, on loop, with virtually no battle tactics whatsoever. The result is that Monkey Barrels delivers very homogenous experience that I wish had a bit more “balls” to action. Instead of making adversaries smarter as the game progressed, most stages just throw more bots on screen, which has never really sat right with me. In doing so, clearing a map successfully feels more like you are simply getting lucky, as opposed to gaining any sort of skill, or achieving something of substance.

Fortunately, the moment that you hit a progression wall, there is the ability to return to camp and purchase new weapons. Additional armaments are acquired by either purchasing their blueprints outright or gathering them throughout your gun-toting travels. Once they’ve been added to the arsenal, they can be equipped at the start of a stage. I only mention the “start of a stage” part, because that means that if you’ve reached a checkpoint in a stage, updating your firearms will result in those checkpoints being nullified.

Depending upon the weapons being used and your skill level, you can find that stages in Monkey Barrels will vary drastically in length. Some range from as little as seven minutes on the low end, and as long as 25 minutes on the high side. Drag that out for nearly two dozen stages, and you have a rather meaty singleplayer campaign on your hands. The problem is that most layouts and settings appear to be damn near replicas of what had been played previously. 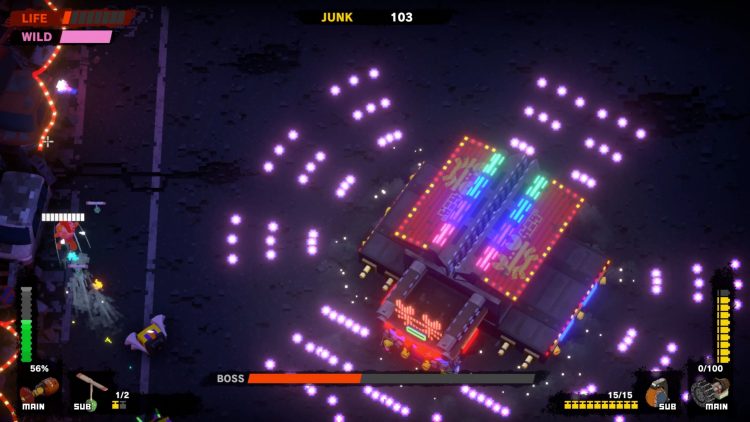 Continuing the trend of things feeling same-ish, let’s go over the weapons. Despite there being boatloads of weapons to unlock, the more powerful versions of each gun don’t feel like they are performing any differently than the supposedly more inferior build. Yes, variety is certainly the spice of life, but if there is nothing to visibly differentiate an upgrade, aside from a stat boost, it becomes far trickier to determine which new guns to purchase. Even adding the ability to compare a potential new weapon to its equivalent that’s already in your arsenal would’ve been a huge step in the right direction.

As much as I wanted to love Monkey Barrels, it lacked the hook to keep me enthusiastically slogging through the campaign. Amusing presentation aside, the gameplay felt repetitive and lacked the incentive needed to keep players coming back from more punishment, round-after-round. If you’re looking for a weighty time-suck, at a moderate price tag, this may fit the bill. Just don’t go in expecting to set the world on fire, unless you are a huge fan of continuous trial and error.

It feels like Monkey Barrels has all of the components necessary to succeed, yet they miss the target ever so slightly. The repetitive stage structure, weapons, and enemies undermine what could have been special, but helps to prolong the overall experience. This isn't going to win any awards for innovation, but at least you will get a lengthy campaign to sink your teeth into.

Warhammer 40,000: Battlesector is coming to PC in May

By Damon Apelt8 hours ago
Reviews