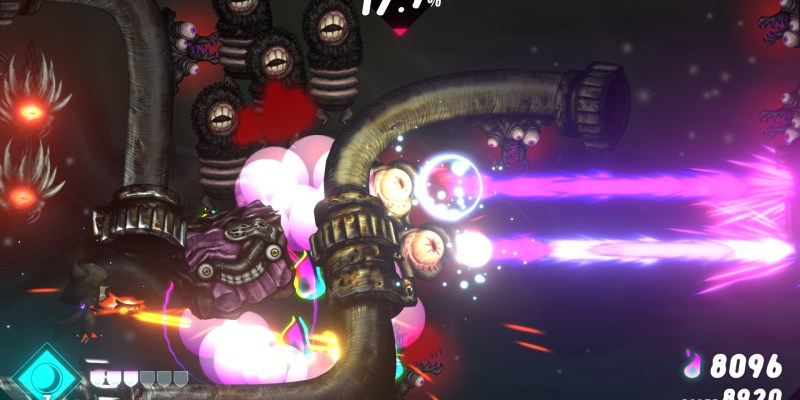 Shoot ’em ups (or shmups) are not known for having many hours of content. Sure, people can dump time into them, but that’s usually due to how much practice they require along with the potential for chasing higher and higher scores. NeverAwake isn’t just a great shmup with a wondrous visual style, it’s also one of the beefiest shmups I’ve ever seen. Some of the levels fumble a bit when it comes to design, and I’m still not sure how to complete certain challenges. But this is a unique, absorbing game for anyone who likes to weave away from bullets and obstacles while frantically firing.

NeverAwake is set within the mind of a young girl named Rem as she lies in a hospital bed after falling into a coma for reasons not initially specified. The game has seven main worlds, each with its own theme. They convey information about Rem’s life, as well as provide context toward why that certain thing is on her mind. Unlocking a new level rewards you with a new diary entry that grants a bit more insight. It all amounts to a fairly honest and touching look at depression, social anxiety, isolation, and grief.

NeverAwake has some high-class production values. Most everything is rendered in 2D, save for the player model representing Rem herself. From the fodder to the more imposing menaces and bosses, enemies are all exquisitely detailed as they glide over nightmarish vistas depicting exaggerated versions of mundane locations. The developer’s previous shmup was very rough and simplistic as far as visuals go. The step up in regard to quality is positively enormous. NeverAwake nails its aesthetic in a way that few games do while tying it all together with its heavy themes in a satisfactory way.

Give me your soul

Each world in NeverAwake has 10 levels, 70 in total. The goal in each is simple enough: when you destroy enemies (or shoot a large pink crystal that moves through the levels with you), multicolored souls show up. You need to collect them until your soul gauge hits 100%, at which point the level will end. Instead of having levels typical of a shmup, each level loops. The longer it takes you to collect all the necessary souls, the more loops you’ll have to contend with. Levels grow in difficulty with each additional loop.

There are no continues; if you bite it, you need to start the level over from scratch. But they’re mostly quite short and rarely take more than a couple of minutes.

You control Rem’s movement with the left stick and shoot and aim with the right. You can also dash and make use of an equipped special or accessory. Rem’s hitbox appears to be her throat, but I’m not positive on that. I wish it was more clearly specified, as that would have been helpful to properly dodge projectiles. But I’m sure someone more observant than myself will nail it down in no time.

Rem’s dash moves her quite far and has a lot of invincibility frames to boot. Getting out of the way can be quite easy. However, you’re likely to crash headfirst into more damage based on where you arrive after dashing. There are a great many special attacks in NeverAwake. You get a specific number of charges and, once they’re gone, you don’t get more unless you have certain accessories equipped. There are three boss battles per world, and you have to damage the boss enough to end each phase. At that point, the boss will drop roughly a third of the souls you need for the level.

A unique approach to difficulty

Difficulty is often a sticking point for shmups. The genre is known for being quite difficult, and NeverAwake is no exception — not technically, at least. NeverAwake handles difficulty quite differently. Instead of having difficulty levels to choose from or a menu with accessibility options, how hard everything is is governed by what accessories you equip. By default, Rem takes one hit and that’s it. But you can equip shield rings that give you armor points.

The kicker is that as you die, more of these helpful accessories will appear. Rem has accessory slots available, and these can be expanded with purchases. You purchase everything from the shop with souls accrued through playing the levels. And you can spend them on accessories, special weapons, or upgrades for both. If you try to not give yourself any sort of bonus via accessories, you can expect NeverAwake to be a very tough game. But if you want the help, accessories will give you a bunch of extra shield points, as well as bonuses that refill your shield when your soul meter is 33% and 66% filled.

Other accessories can alter the power of your shot, refill your special weapons, and grant you additional abilities, such as allowing Rem to acquire all nearby souls three times per level. NeverAwake started getting much tougher towards the end of the second world, but the accessories mostly kept the frustration to a minimum. By the last couple of worlds, though, even they weren’t enough to make the game a cakewalk. You can also choose to overcharge Rem by spending souls on the retry screen to make things easier. I only used this on the final boss battle, which is hard as nails and featured some projectiles that were extremely challenging to dodge.

What dreams may come

The levels in NeverAwake are often memorable and feature some surprising gimmicks. These can be quite interesting, although some were obnoxious. The worst level in the game sees you guiding Rem past walls that protrude. But the game doesn’t give you enough time to react, and the walls easily crush you, which destroys your entire shield. The design in this level isn’t clear, so I was never sure how to get through it. It’s pretty awful. A couple other levels feature an enemy that destroys your whole shield if it so much as touches you, which was far from fun.

Despite these shortcomings, I highly recommend NeverAwake to shmup fans. It took me about five hours to get through, plus you can unlock the eighth world if you complete all the challenges that open up in a world after beating its boss. These are mostly self-explanatory and require you to beat bosses solely by shooting them instead of gathering souls or by filling your soul gauge. But one challenge type requires you to find something in wormholes, and I’m not at all sure how to do this. Still, this is a fantastic shmup that’s well worth the cost of entry.

NeverAwake doesn't just have stellar graphics, it offers up some really special shmup gameplay with a surprising amount of content.