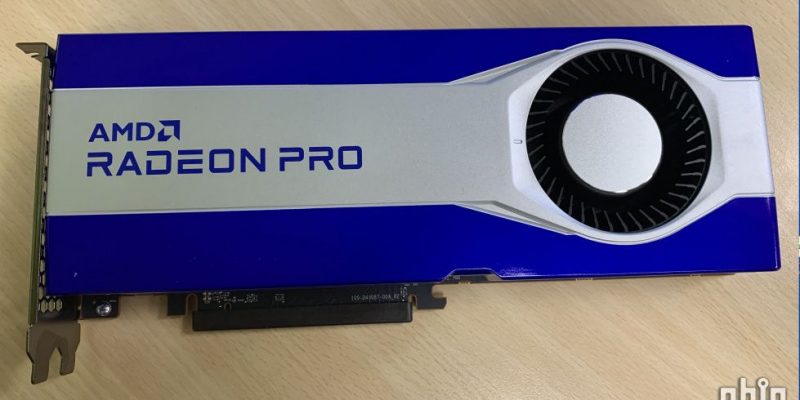 AMD has another GPU coming, and it’s much more colorful than its last one. A leak from the Chiphell forums has revealed a new, mysterious Radeon Pro graphics card. If these leaks are true (they should be taken with a grain of salt just like any other leak), this could be our first sighting of Big Navi Radeon Pro GPUs.

At first glance, it would be fair to believe this isn’t a new card but rather a Radeon Pro VII or Radeon Pro W5700. However, slight differences in the look of the card’s shroud and blower set its design apart. And, seeing how the card is clearly labeled as an engineering sample, it’s still under development. This isn’t some previously released card, it’s something entirely new, and that points to RDNA 2.

Sadly, it’s impossible to tell exactly what the capabilities of this Radeon Pro card are from this leak. Another sticker on the back of the card says that it comes with 16 GB of memory, courtesy of Samsung. However, that’s all we’ve got for now. We can assume, however, that the card is based on the design of one of the extant 6000 Series GPUs.

Will this card hold up against the competition?

Right now, we have no idea when this card may release, or what its MSRP could even potentially be. That being said, we do know what it will eventually be competing against, and it looks like AMD has a tough fight ahead. The AMD Radeon Pro GPU shown in this leak will be trading blows with Nvidia’s Ampere workstation cards. These GPUs are no laughing matter, with the already-released RTX A6000 packing a whopping 48 GB of memory. That card, which costs over $4,000 USD, is Nvidia’s flagship workstation card, and two more with 24 GB and 16 GB of memory are rumored to be in the works. Deathloop has been delayed until September

By A.K Rahming2 days ago
Hardware