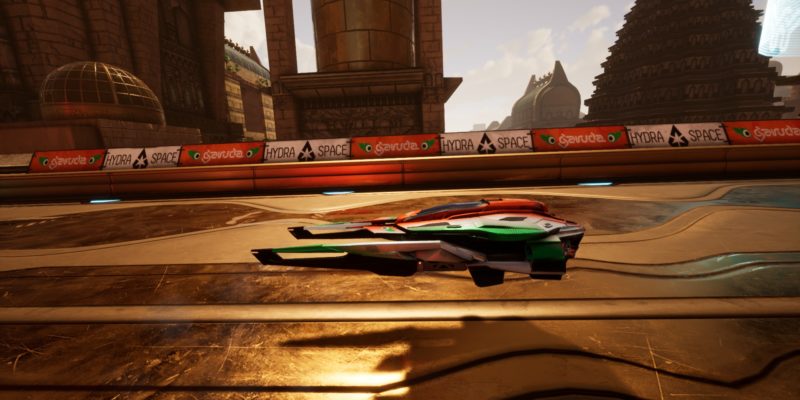 Blazing through anti-gravity tracks at high speed! Taking other racers out with a bunch of weapons! Getting slapped back and forth between two sides of the track while you can’t see where you’re going! Racing in the future sure is exciting. It’s been five long years since fans backed Pacer on Kickstarter. Back then, it was known as Formula Fusion, but they changed the name because they wanted it to be less generic. This spiritual successor to Wipeout has the looks and speed down, plus the tracks can be fun and flashy. But the combat is weak and some of the tracks are just plain awful, diminishing some of the game’s appeal.

If you’re reading this, I refuse to believe you’ve never heard of a futuristic racing game before, which is exactly what Pacer is. You’re dropped into the cockpit of a weird racing pod and must take part in a variety of different event types with the aim of getting the gold, or something. The game is made with some original members of the old Wipeout team from way-back-when and that influence is extremely clear. As this is a racing game, there’s no plot, characters, or setup either. Which is a good thing, as there are no racing games with good plots.

Career modes are often strange in games like this. They’re typically devoid of inspiration and are generally just a series of regular races that are meant to familiarize you with the tracks and gameplay before jumping online. Pacer still does that, mind you, but the career mode is surprisingly varied and fleshed-out versus what I was expecting. For starters, it’s laid out in a somewhat confusing manner that should make sense after a bit of time has passed. It begins with it a few tutorial levels before shoving you into the career structure.

It works like this: you have different speed classes in Pacer that you’ll unlock by progressing, which is familiar. You’ll start out by taking part in a three-race grand prix event where you’re meant to finish in the top three. Once you do, you’ll unlock a set of events. Each set is comprised of three different sponsors with seven events each and each of these sponsors has a certain amount of goals you can choose to complete. At first, you have to select one of the three sponsors, which dictates which craft you’ll be piloting for those seven events. You’ll then be locked to that sponsor until the seven events are completed with, once again, at least third place per event. Once you do that, you can then do the other two sponsor’s events. Completing all 21 of these events then allows you to access the next grand prix.

Truthfully, I’m rather fond of all of this. It’s so much more interesting than just going through a set of plain races, but it gets even better. There’s a good amount of variety to the goals you’re given in these. There are routinely regular races, sure, plus other familiar modes, such as elimination where the racer in last place is eliminated once a timer counts down. But there are also events where you have to compete with the AI to shoot down the most racers. And the weapons you’re forced to use vary. There’s an event where the race is decided by who gets the fastest lap overall. One where you can’t steer your craft aside from air-braking. Another where you have to stay within a certain space or you take persistent damage. There’s almost always something new to see in Pacer, which is fantastic. 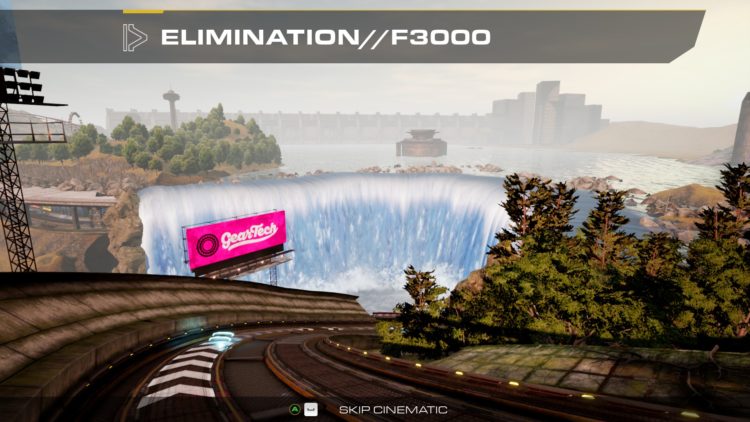 You know the drill here. For Pacer‘s career mode, your craft is selected based on the sponsor, but you can change performance and weapons presets, including custom ones. The high speed one is your best chance of victory much of the time, but sometimes you’ll want a craft with better defense. Other modes allow you to customize your own cosmetics loadout, but I couldn’t get this to work during the grand prix mode in career. As for weapons, each craft can equip two and these can have a couple of mods each, which can vary up your playstyle a bit.

Pacer‘s a futuristic racer, though, so you’ll hold a button down to accelerate as you avoid hazards and try to win events. You can air-brake left or right in order to successfully navigate turns, while pressing both air-brake buttons simultaneously brakes completely. A boost gauge also builds at the bottom of the screen which allows you to, you guessed it, boost. There are boost pads all throughout the game’s 14 tracks, as well as repair and weapon pickups. Every time you get attacked or slam into a wall, you take damage. Losing all of your health makes you explode, so you’ll want to try and avoid that, obviously.

You can only hold one weapon pickup charge at once. Let’s say you have a rapid-fire gun and a rocket launcher on your craft. Picking up a charge will let you either use a clip for the gun or a single rocket. If you fire a single round from the gun, you can’t use the rocket at all. Personally, I don’t like the weapons at all in Pacer. I find that the attack buttons don’t always work and that the lock-on is iffy. It also just doesn’t feel particularly good, and some of the weapons are just way better than others. The aforementioned gun, for instance, is quite useful, while the rockets are awful and miss most of the time. There are also defensive weapons that you can bring with you, such as a tether that drains an enemy’s shield and adds to your own. 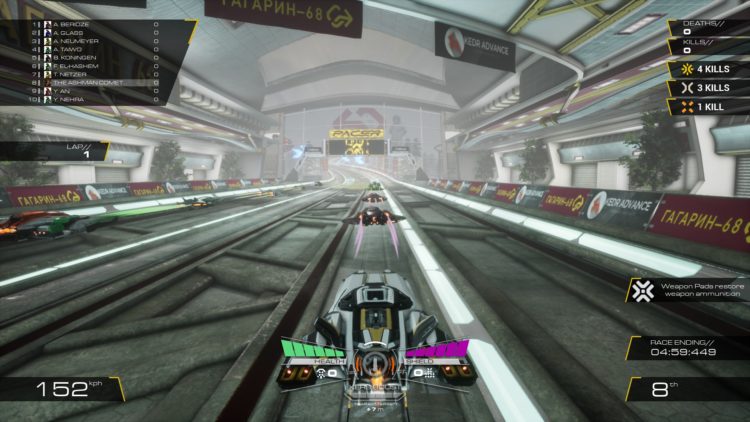 I do not want this

The combat in Pacer just doesn’t blend very well with the high-speed gameplay. The events where you’re trying to destroy other racers for points feel tedious, as it’s difficult to track them and you basically just spend multiple minutes grabbing weapon pickups and spamming attacks while hoping enemies blow up. And it can take a while. Plus, the AI is hilariously bad at fighting during these events. And there are quite a few of them throughout the game’s career mode. It’s also just plain annoying to try and focus on making difficult turns while you’re getting shot to pieces when the AI remembers how to fight during standard events. 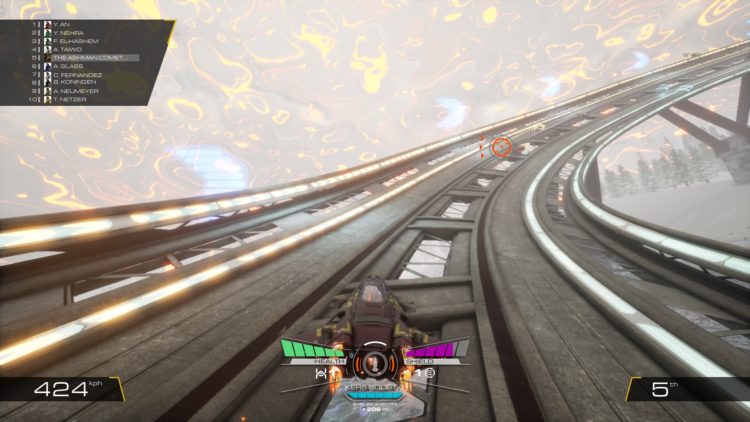 That’s if you can make the turns to begin with. As I stated earlier, some of the tracks are quite bad. For instance, one takes place in a canyon and quickly juxtaposes between left and right turns. Only, the vehicles in Pacer don’t seem to be able to turn that quickly, so the game just turns into pinball as you struggle to control your craft as it bounces off of walls. Then the anti-gravity sections might change perspective suddenly without giving you any idea of what’s in front of you, aka one of the main things you don’t want to happen in a racing game. Trying to fight off enemies while racing on this track is horribly obnoxious. Many tracks are often annoyingly narrow as well, which doesn’t do the game any favors.

Pacer‘s visuals are fairly strong, however. The game runs on Unreal 4 and the tracks are vivid and memorable, plus rather unique, with variable design and standout sections. Of course, you’ll remember some sections just because they’re such a pain to race through. Especially since the air-braking, which is one of your main means of fine control, just doesn’t appear to be fully up to the task of giving you the amount of said fine control you’d want to begin with. The AI in the game is also fairly problematic, due to it frequently being way too easy to beat them, as you’ll often get into first place and then never see them again. Oh, but they race that canyon track with inhuman perfection, of course. 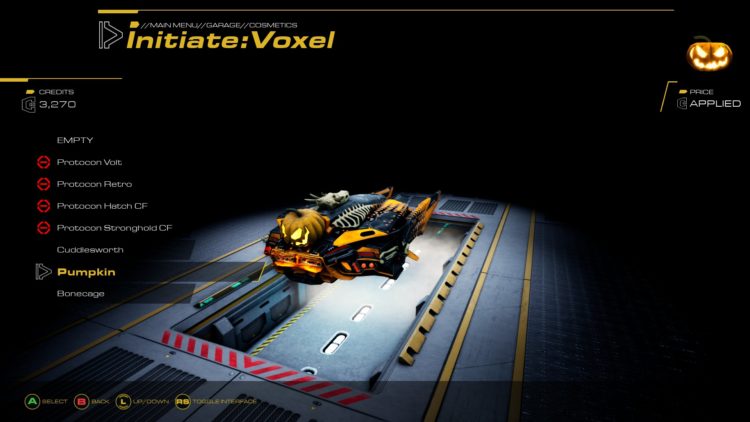 Overall, I like some of what Pacer has to offer. The career mode is surprisingly substantial and variable, the visuals are clear and well-realized, and the sense of speed is palpable. But subpar combat, some poor track design, and noticeable issues with the AI make the game less than it could have been.

Solid in some ways, less-than-desired in others, Pacer is a fairly good futuristic racing game with some caveats.

Watch Dogs: Legion guide — Operative skills and which to look for

The Legends of Heroes: Trails of Cold Steel IV review — A fine conclusion

By Kurt Perry11 hours ago
Reviews

By Will Backus5 days ago
Reviews