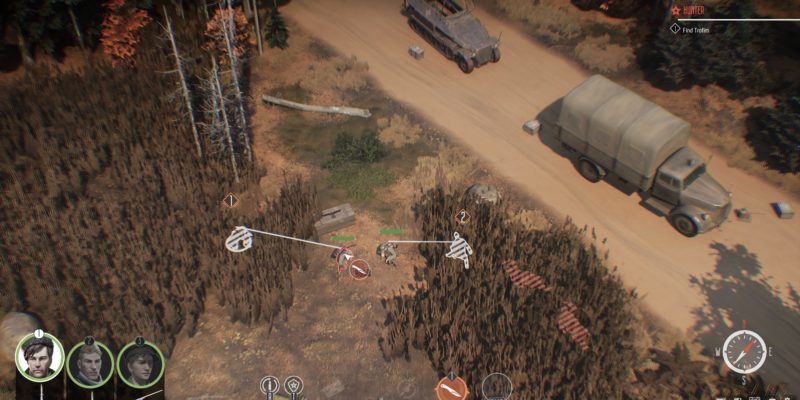 This is a World War II game where you fight as the local people resisting the Nazi occupation – but it’s not set in France! That’s right, baby, we’re finally acknowledging that Soviet partisans existed. The game, appropriately enough, is titled Partisans 1941.

As hinted in the title, the year is 1941. The Nazi blitzkrieg (still very much horse-powered) is unleashed on the USSR. Chaos follows, and many Soviet units are beaten, scattered, or surrounded. Captain Zorin comes from one such unit – and for now, he’s an escapee from a German POW camp. Meeting up with the locals, he’s about to get some resistance action going. In the immortal words of B.J. Blazkowicz, we’re about to be “shooting, stabbing, and strangling Nazis.”

Well, maybe not strangling, that’s unsupported in the game.

Outnumbered and outgunned, but not outstabbed

Typically, your time in Partisans 1941 will be spent controlling a group of three fighters from an isometric perspective that we all know and love from titles like Desperadoes, Commandos, XCOM and countless others. This is a real-time tactics game, but you can also engage in tactical pause mode to easier coordinate actions between the members of your group.

You must remember that you only have three members of your unit with you. Likewise, there are many more Nazis on the map. You always have to strike from a position of power – or ambush. Therefore, tactical pause is invaluable in both setting up shooting galleries to nail as many Nazis as possible before they can fire back and for getting one member of your group to stab a guard while Zorin throws his instagib knife at the next trooper.

Seriously, due to his knife throwing-and Nazi-stabbing skills, Zorin was my Partisans 1941 MVP. 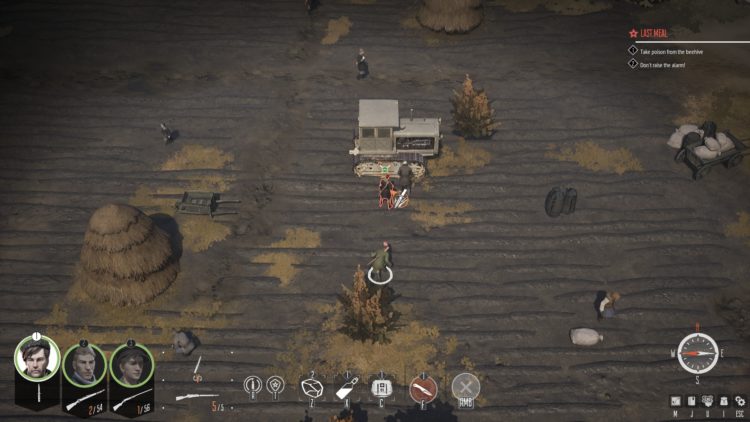 Actually, the knife throwing skill is one of two skills unique to Zorin, Each character has an individualized skill tree, but most upgrades are common if unlocked at different levels.

Everyone can upgrade their ability to handle two types of guns (that’s rifles and pistols for Zorin), though the rest of the spread is a bit more varied. Some partisans are better at stealth – like Sanek who pretends to be just a kid to bypass enemies – while others have a more direct martial bent. In the end, it’s all up to individual preference. You might even choose to never unlock any of the unique skills if, for some reason, you want to miss out on stuff like Valya’s one shot-one kill sniper attacks.

Fighting the war in Partisans 1941

Again, this all depends on your playstyle. Some mission objectives in Partisans 1941 will demand stealth. This may throw a bit of a wrench into the plans of players who like to GO LOUD as fast as possible. Fortunately, you’re left to your own devices most of the time. Personally, I found the stealth route to be easier, if only for whittling out outlying guards before coming down hard on the main group. It’s a bit like Mutant Year Zero in allowing you to thin the herd before getting embroiled in a fire fight.

There are also interactive bits of scenery like exploding barrels or OSHA-nightmare trucks on ramps that can be used to aid you in the goal of killing Nazis. 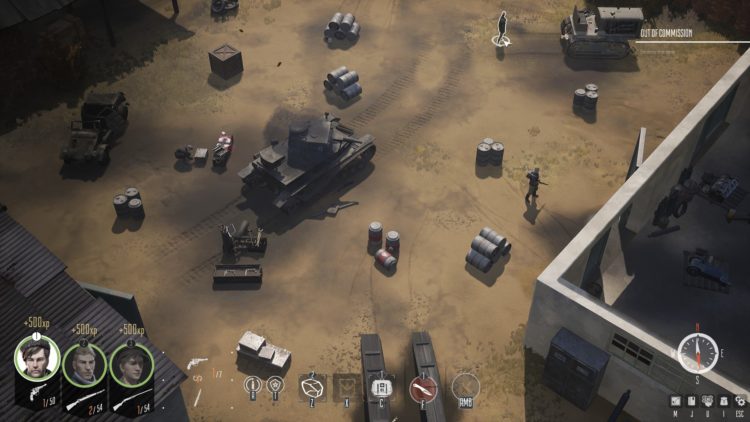 As for when the shooting starts, it doesn’t usually last long. On normal difficulty, neither you nor the enemy will have an abundance of health. So outside of skills that enable you to dodge shots better when moving, it’s all about having good cover and preventing enemies from flanking you – oh, and grenades. The enemy is generally smart enough to get out of their way, but it’s not always the case. Chucking one at a group of fascists is generally a fun opener.

As thrilling as combat is though, it’s not just about sending Nazis to Hell in Partisans 1941. It’s also about scavenging and looting. The enemies have the annoying RPG habit of dragging their weapons and ammo into the afterlife, so you’ll have to be very attentive when it comes to boxes and forest stashes that might be out of the way of your normal attack vector. Luckily for us, pressing “Alt” highlights the interactive bits of the environment, so you don’t have to do pixel hunting.

It’s not called Parisians 1941, you know

You’ll also find food and materials, which are useful for the other half of Partisan 1941 gameplay: the partisan camp. This is where you treat lasting injuries between missions, worry about starvation, send people out on off-screen missions, and generally do maintenance. With upgrades, the camp will allow you to manufacture a bit of your own gear and even improve weapons, with better quality weapons accepting more modifications. This is also where you’ll get local rumors (Nazis are being bad to the locals), news from the front (Nazi war machine is crushing everything), as well as dialogue that pushes the plot along (“We could surely kill some Nazis!”). 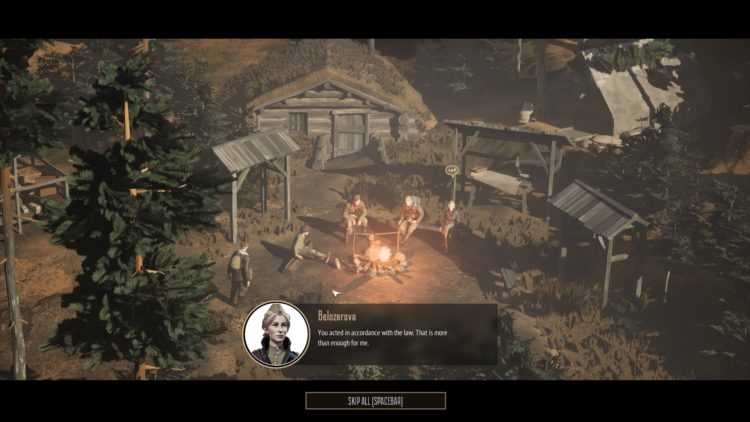 Hot partisan singles in your operating area looking for men that act in accordance with the law!

This camp part is what almost tempts you to make the devil’s bargain. Almost! You see, not everything you can loot in the missions comes from the Nazi military-industrial complex. Sometimes, you’re rooting through the belongings of a peasant. You can take them, but your team will take a morale hit. Generally, I found it not worth it, but it may have something to do with me always sending people on food missions, thoroughly looting everything I find, and also having little in the way of consumption due to knife-in-the-gut being an infinitely renewable resource.

However, even when fighting an enemy as obviously evil and abhorrent as Nazis, you’d expect to still run into a lot of decisions that are morally dubious at best. And Partisans 1941 is almost entirely lacking in those. In fact, this game by a new Moscow-based studio is naïve if not outright propagandist at times about certain realities of the Eastern Front.

Sure, you won’t have characters going “boy, I sure love Stalin, the man has never done anything wrong.” Yet your comrades are basically postcard-ready images of the perfect and motivated group of resistance fighters. You even have off screen missions to eliminate “bandits that pretend to be partisans.” You may also receive news of Germans forcing people to work at the mill, all capped-off with a wide-eyed shout of disbelief: “That’s slavery!” It surely would be somewhat awkward if the USSR also had a network of forced relocation and labor camps at that same time…

Is that you, Pyotr Aleksandrovich?

Politics aside, the writing of Partisans 1941 is fairly decent. The main cast comes from diverse backgrounds, and there’s an interesting variety to the types of missions that you undertake. This game hits all of the right notes for Eastern Front guerilla warfare. It’s generally good, even down to the level of actual grammar, which is not always a given when it comes to developers from non-English speaking countries.

The visuals I also found to be decent. In general, you’ll be left with the impression that Partisans 1941 is a very brown game. But this might be somewhat mistaken, as the game provides a variety of environments and seasons of the year that all bring it a bit of variety. I feel like textures and character portraits could have been more crisp, but that’s it. 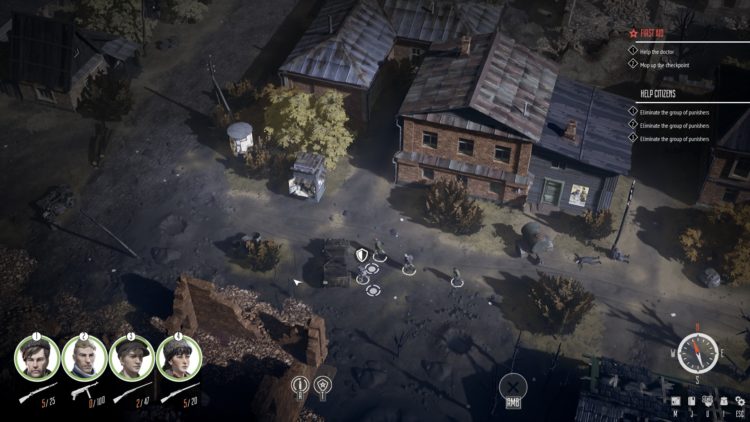 The audio quality in Partisans 1941 is generally great. The voice acting is good – no terrible Men of War accents here. This also makes the unit barks a lot easier on the ears. I have to say that this is the game where your characters have the least patience with you clicking them a lot. The sound effects follow suit, and you’ll definitely learn to fear machineguns both from their effectiveness and sound.

Partisans 1941 is an interesting, and dare I say necessary addition to the pool of World War II games. If memory serves, the only big title to have previously tackled red resistance was Company of Heroes 2, and that one was almost a piece of Nazi propaganda. So, if you’re mindful of the bit of possible Soviet whitewashing that’s in Partisans 1941, you can definitely enjoy this slightly unusual World War II experience. I mean, I love shooting Nazis as much as the next guy, but it does help to remember that the first “W” in World War II doesn’t stand for “Normandy.”

Partisans 1941 provides a fun way to stab Nazis even if the depiction of guerilla warfare on the Eastern Front is kinda sus.

By Will Backus21 hours ago
Reviews