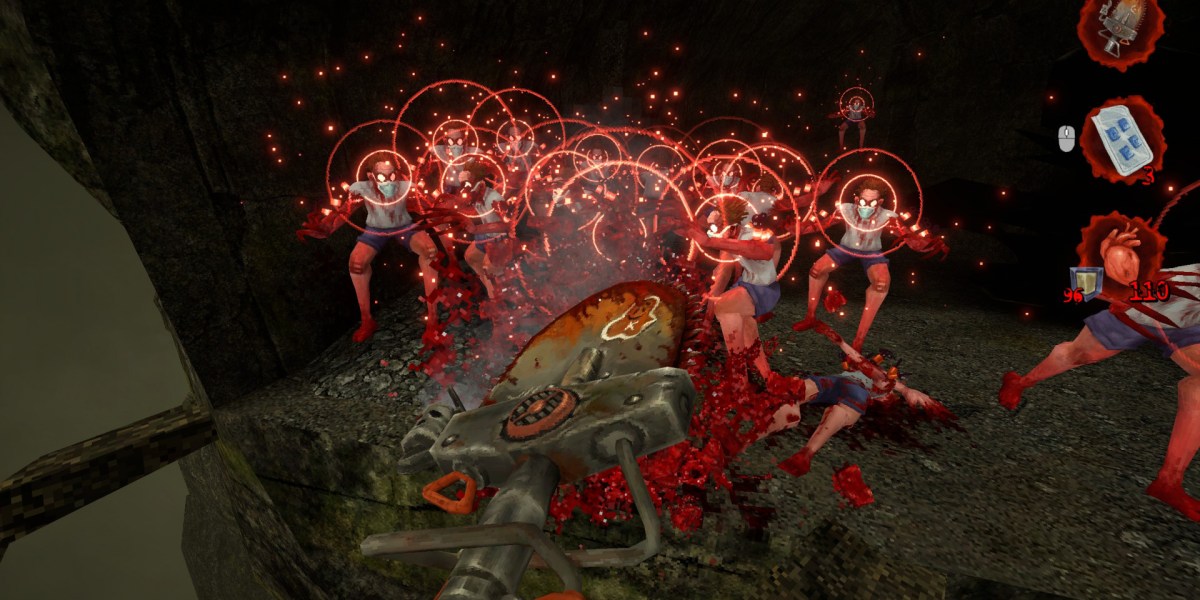 The reception to the Postal games was never really what anyone would call “positive.” There was a bit of hope for this to go the other way when Postal 4 spent a considerable amount of time in Early Access, allowing players to inform the developer of issues to try and make for a better final product. Then it released to a Metacritic average in the low 30s. Despite bearing the series name, Postal: Brain Damaged is actually very good. In fact, it’s quite close to being great. However, it’s held back by some worrisome bugs and notable problems with balance and enemy placement.

Postal: Brain Damaged isn’t a Postal game. Not really. It features the series’ protagonist and humor, but structurally and gameplay-wise, it’s very much a ’90s first-person shooter. The story is that the Postal Dude is asleep and dreaming about various things. There are three episodes with five levels (four standard and one boss battle), and each episode has the Postal Dude attempting to accomplish some sort of silly goal. The cutscenes are animated and well made. This is Postal humor, though, so the game’s not all that funny. But the creativity in the presentation can elicit some chuckles here and there.

The game’s levels are large and extremely well designed. Every last level has its own theme that isn’t repeated. The level construction is memorable and consistently unique, which makes the acts of exploration and navigation a joy. They’re the classic “find colored keys then open doors” variety, and the level design is so good that it rivals or possibly even surpasses Dusk. Seriously, the design is that good. The first level takes place in a cartoony suburban neighborhood, but you’ll soon end up at a caricatured version of the US-Mexico border. Later, there’s an asylum, a game convention, and plenty of other memorable environments that are packed with character. 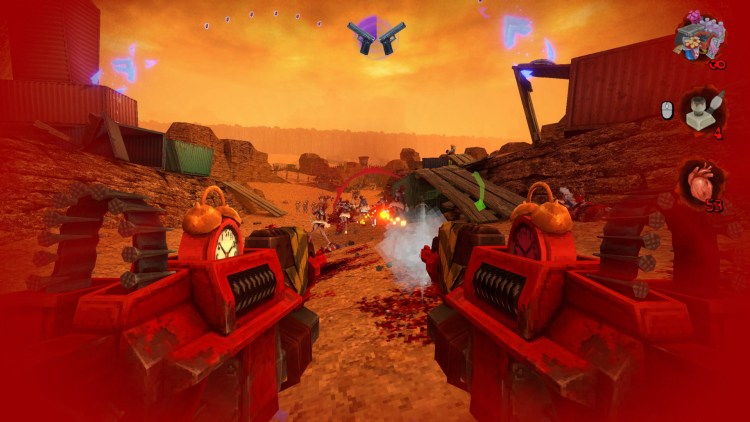 Only as good as the arsenal

Most of the guns all have alternate fire modes that are helpful. The pistol can lock on for three shots. The shotgun has a meat hook a la Doom Eternal. The machine gun shoots stasis fields. Huh. So much of Postal: Brain Damaged just radiates fun. It’s not a surprise the game already has an Overwhelmingly Positive rating on Steam.

Keeping the impressiveness going, the bestiary is mostly fantastic as well. Each episode mostly has its own enemies, but they do mix around some. Postal: Brain Damaged‘s visuals are very much like Quake, with lots of chunky pixels all around. Despite this, everything feels detailed and nicely established. The enemies come with as much variety as the levels too. Flying obese men who throw hamburgers, lizard people, a toy monkey that creates a ton of smaller toy monkeys that chase you, vicious furries. A ton of creativity went into this game. Enemies blow apart into gory chunks on death, and you can push their bodies around by walking or sliding into them.

The Postal Dude can’t run here, which initially seems like a mistake. But you’re supposed to move around by sliding, jumping, and then sliding again, which massively ups your speed while also making you harder to hit. Usable items litter the levels. Crack pipes heal you, portable armor vests give you full armor, different liquids give Postal Dude’s piss combat capabilities such as burning and freezing. Even if the tide turns against you, items can make a difference. This is one of those games where you lose all your shit between episodes, though, so there’s literally no reason to hoard anything. If Postal: Brain Damaged didn’t have some pretty serious problems, I’d mostly just gush more here and then drop an 8.5 or 9 below.

Those problems absolutely don’t irrevocably mar the game, mind you. It’s too good for that. But they definitely put a damper on the proceedings.

Let’s start with the bugs. I got stuck in level geometry. In one level, my attacks stopped hurting enemies and their attacks stopped hurting me. The second boss didn’t load at all the first time I tried the level. I’ve loaded a level only to find that no enemies spawned anywhere. Quick loading a quicksave from a previous level instead saw me loading back to the beginning of my current level. When I defeated the second boss for the first time, clicking “next level” started the level over again. The second phase of the final boss battle saw the boss lay down on the ground and stop moving, allowing me to steal an easy kill.

On the Steam forums, others have experienced similar issues of level triggers not working, demanding restarts. To put it mildly, Postal: Brain Damaged needed a considerable amount of additional bug squashing. But that’s not the only thing that could have used some more work. The amount of damage enemies do is mostly completely fair. But some enemies (the doghouse dog, the cars) do way too much damage and can kill you in three hits. This isn’t really much of a problem since you have a quicksave, but it can still annoy. 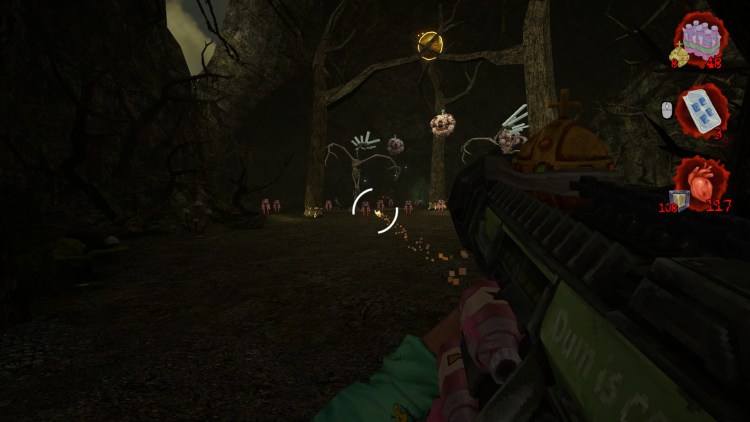 Is there something behind me?

A previous game from this developer, Elderborn, had an issue with enemy placement being sloppy and haphazard, which returns in force here. Enemies will often spawn behind you and shoot you in the back. One section has you ride an elevator downward. The second you reach your destination, three enemies immediately open fire on you. Some enemies shoot long-range, continuous beams and just melt you. A lot of this damage can feel quite cheap, especially when you often have to contend with three or four at once. The toy monkey can create situations where you’re swarmed by the smaller variations while struggling against too many enemies simultaneously. This is very much a “quicksave all the time because you’re going to take damage that’s beyond your control” game.

On top of that is the health distribution. For instance, in the first level, health can be too hard to come by in certain sections. In other parts of the game (specifically the third episode), I found so much health that  I was practically always topped off. The game was supposed to be harder here. The difficulty in general is often inconsistent, too. I was pretty happy with the balance during the first six levels. Although, level seven has an enormous difficulty spike, complete with a barely manageable arena battle. The game never gets nearly as hard again afterward.

But then there’s the cat vacuum weapon. Once you get this, the enemies become barely threatening. Not only is it pretty much the best weapon in the game, sucking up cats you’ve already fired practically gives you unlimited ammo. Plus the cats you’re pulling back to you also damage enemies. The weapon is insanely fun to use, but it turns the game into a cakewalk. I hardly used anything else for over a third of my playtime. The game took me about 10 hours, though, which is a perfectly acceptable length — especially for the low price. 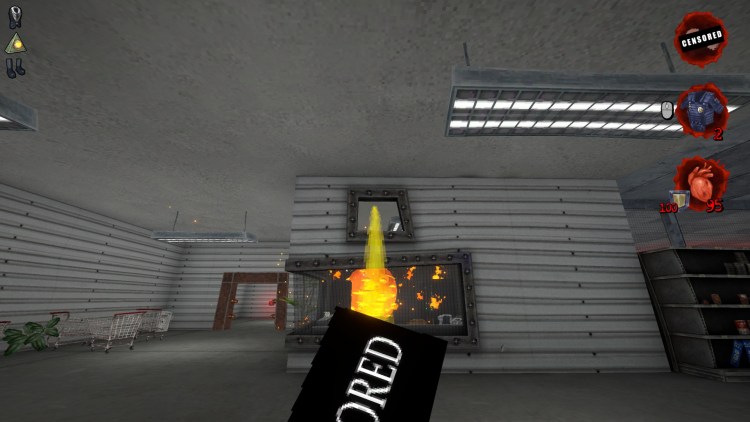 The good news is that Postal: Brain Damaged‘s problems are all fixable. Developer Hyperstrange went out of its way to patch up Elderborn after release, and I’m hopeful the same will be done here. With all of the above issues ironed out, this could be one of the greatest games in its genre. But even with all the problems, this is still pretty much a must-play for anyone who likes these throwback shooters. No amount of bugs or balance problems can make the visuals, level design, and weapons less of a sterling example of how to do the genre right. I’m going to keep an eye out for those patches.

A fantastic throwback FPS with wonderful levels, awesome weapons, and top-notch gameplay, Postal: Brain Damaged is held back by bugs and balance issues that can't ultimately tarnish this worthy game.

Diablo Immortal has made $24 million in revenue since its release