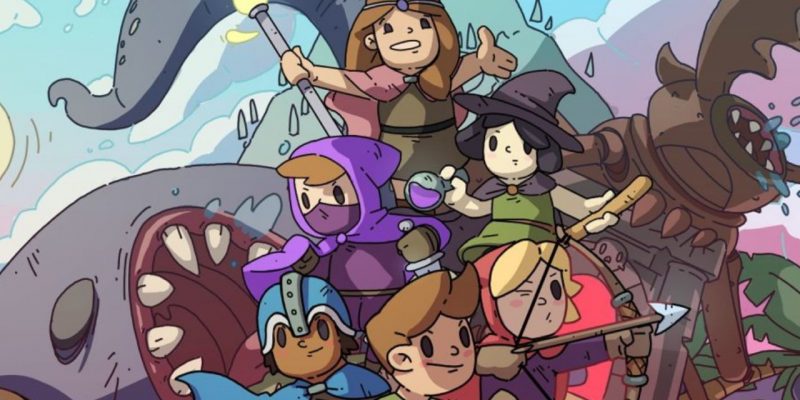 It’s no secret that Zelda is one of the most successful RPG franchises ever made. But across its 35-year history, Nintendo has yet to give it a chance to shine on PC. However, that hasn’t stopped other developers from creating Zelda-inspired games for us to play. Of the many Zelda-like titles I’ve played over the years, Rogue Heroes: Ruins of Tasos might just be the best.

Rogue Heroes is a top-down, retro-inspired 2D action RPG published by Team 17. I know them best for Worms, but it’s also responsible for The Escapists, and Overcooked. They have a reputation for publishing some of the most polished indie games on the market. A trend that Rogue Heroes follows. As for developer Heliocentric Studios, it’s previously made Magnetta and Gran Vitreous. Rogue Heroes: Ruins of Tasos is its first large-scale release.

Given its roots as a Zelda-inspired RPG, Rogue Heroes‘ focus on dungeons should come as no surprise. The dungeons are partially randomly generated but not in the way you may expect. Each dungeon will have a selection of man-made rooms assigned to every floor. Upon entering that floor, Rogue Heroes will then generate a layout using these rooms. 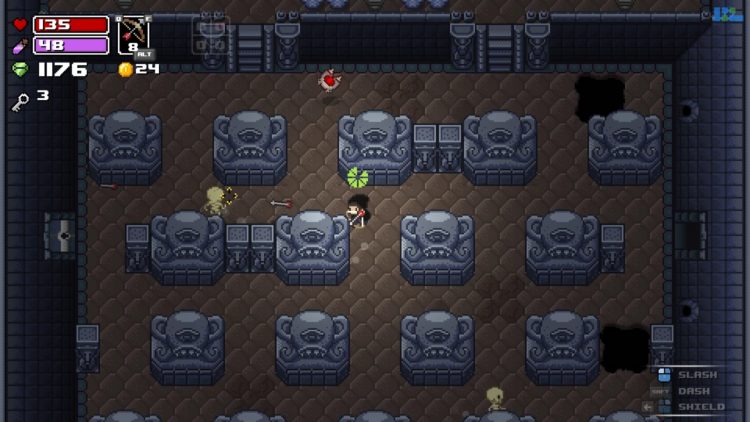 This has its pros and cons. On one hand, having man-made rooms avoids the biggest issue that true random generation tends to cause: generic layouts. Each floor is diverse and features interesting puzzles with combat scenarios reminiscent of the best ’80s RPGs. Speaking of combat, Rogue Heroes plays like a more refined Link to the Past. You have a sword, bombs, bow, grappling hook, and all of the usual things you’d expect from a game of this nature. Being so similar to such an iconic RPG is by no means a bad thing, but don’t go into Rogue Heroes expecting any huge innovations in this department.

Rogue Heroes‘ unique method of generating floor layouts can result in some bizarre dungeons. In one instance, I ended up with a singular floor that took over thirty minutes to complete. Given that each dungeon consists of three floors, that can make for a lengthy run. However, on another attempt, the room to unlock the boss key and the boss room itself spawned next to each other at the start of the floor. This resulted in me clearing the floor in less than three minutes despite the map showing another fifteen or so rooms that were seemingly unnecessary. 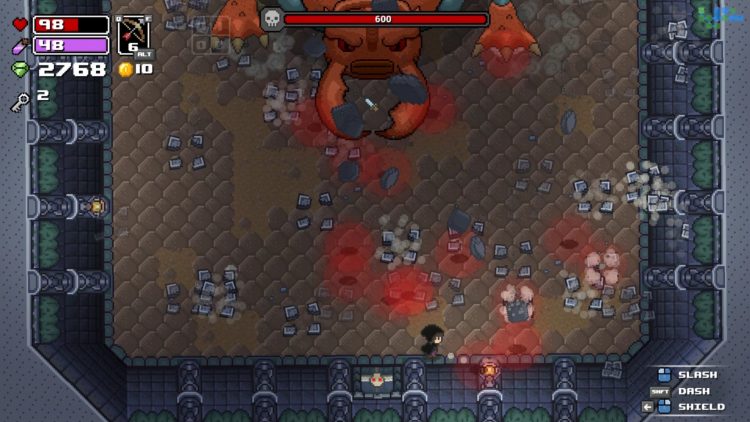 Regardless of this slight oversight, most of the time dungeons work as intended. And thanks to Rogue Heroes‘ dynamic difficulty, they never feel too easy or too hard. In Rogue Heroes: Ruins of Tasos, there is no set difficulty setting. Instead, you spend gems gathered in the dungeons to upgrade your stats, equipment, and town. This means that that the best players can try to conquer dungeons whilst being underequipped while more casual players can take their time. It’s a well-implemented alternative to a traditional difficulty system. I’d imagine this makes Rogue Heroes a prime game for speedrunners to conquer.

The biggest aspect that helps Rogue Heroes differentiate itself is its town management. This isn’t just a game about beating dungeons and finding loot. Instead, throughout your adventure, you unlock new activities through the purchasing and upgrading of buildings.

Many of these buildings are required to upgrade your stats. For example, the blacksmith provides access to an array of sword upgrades including base damage, critical hit chance, and weapon reach. Also, there are other shops that allow you to stock up on items before heading into a dungeon. Perhaps most interestingly, you can unlock magic threads that allow you to change your class. Every class has a unique ability, and varying levels of attack, defense, and mobility. 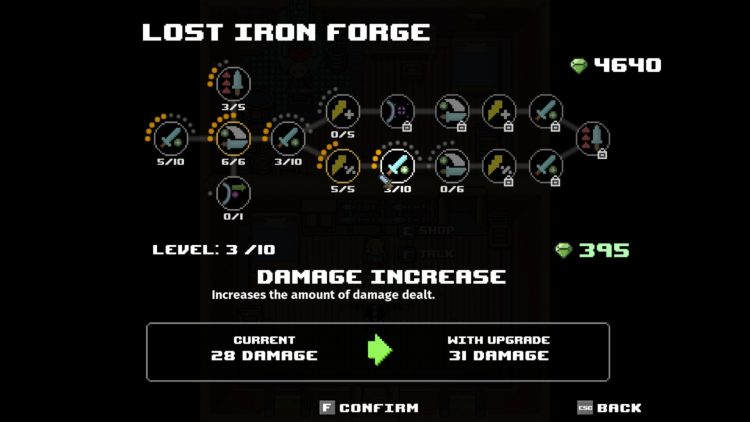 These classes let you fine-tune exactly how you want to approach each dungeon. A knight is great for powering through combat but moves slowly. In contrast, the Ranger is frail but can skip around enemies without being touched.

There are even some less traditional fantasy classes like the Reaper, a relatively balanced class that possesses the ability to gain health back from downed enemies. Some of Rogue Heroes‘ passive effects aren’t working properly as of writing this review, but developer Jonno has confirmed that Patch 2 will address this. 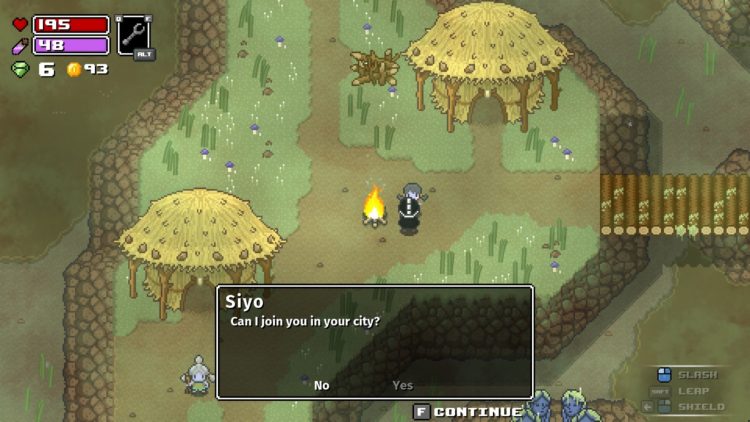 As well as upgrading your town, you’ll also be tasked with attracting and accepting new residents from all over the world.

At the start of Rogue Heroes, the only building in your town is a broken-down house that you live in. As you work your way through dungeons you’ll get more and more gems to upgrade your town. To take down the end-game content you’ll require not only all of the town built but most of the upgrades purchased from each building.

This gives you plenty to do and adds a good amount of replay value for those looking to get the most out of Rogue Heroes. However, be aware that this can make Rogue Heroes a little grindy in some parts. It’s by no means MMORPG levels of grinding, but it can be necessary to lose in a dungeon in order to return to town and upgrade yourself. Consider it to be a sort of roguelite but with less punishments for failure.

The colorful, modern pixel art style that Rogue Heroes uses is one of my personal favorites. We’ve seen similar approaches work in the past with games like Stardew Valley and Terraria. It’s a safe but sure method of delivering a great-looking game without spending millions on engine development. As long as there is a talented artist or two onboard, you’re bound to end up with some gorgeous visuals.

Performance-wise, Rogue Heroes runs fine, but it could be better. There is a hard 60 frames per second cap that I couldn’t find a way around. This is a little frustrating as most PC gamers could easily make the most out of higher refresh rates with a game like this. Although I’d be lying if I said this ever seriously impaired my ability to enjoy playing the game. 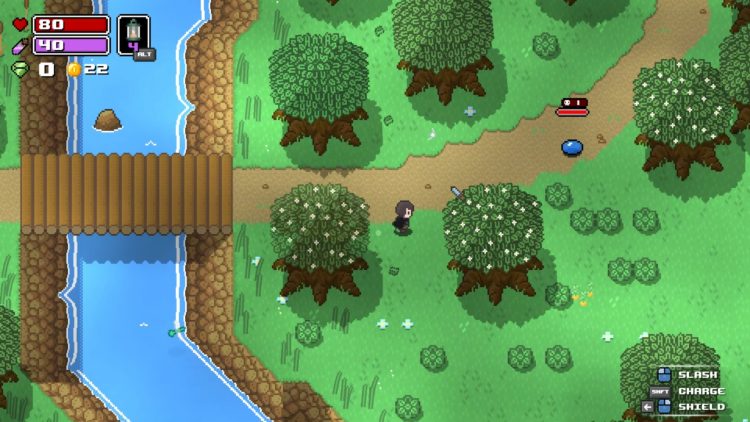 Given its retro visuals, just about any passable PC should be able to reach 60 FPS fine. The Steam store says that the minimum requirement is a GeForce GT 320, so as long as your GPU isn’t a Mayan artifact you should be good.

Unfortunately, the multiplayer is in a bit of a state right now. Be it net code or sync issues, online gameplay suffers from nasty latency and input delay. However, the devs are already aware of this and a fix doesn’t look too far away. If you intended to play Rogue Heroes as a multiplayer game, I’d wait for a patch or two first.

Rogue Heroes: Ruins of Tasos is something we’ve seen before. At its core, it’s a retro-inspired action RPG with a secondary town-building mechanic attached to it. And yet that simplicity is not a negative. Instead, developer Heliocentric Studios has managed to create something that does exactly what it set out to. At no point during this review did I question the purpose behind Rogue Heroes. It’s a fun throwback title that doesn’t do much wrong, and the few problematic things have already been identified by the developers. Having a passionate team behind any game that is willing to listen to feedback so openly is a huge positive.

From the start to the end of this review, Rogue Heroes kept me non-stop entertained. For me, that’s far more impressive than creating a needlessly complicated game just for the sake of it. Perhaps the steepest praise I can heap upon this is that most games I review don’t get touched again after I’ve finished working on them. But Rogue Heroes will be staying in my Steam library for the foreseeable future. And for such a reasonable price, you can’t ask more from a game than that.

Rogue Heroes isn't trying to be extraordinary, but for that very reason it ends up being a fantastic game. By not falling into the trap of doing too much, Heliocentric has delivered one of the best Zelda-inspired action RPGs on the market. And at such a modest price, you'd be doing yourself a disservice to not at least try Rogue Heroes.