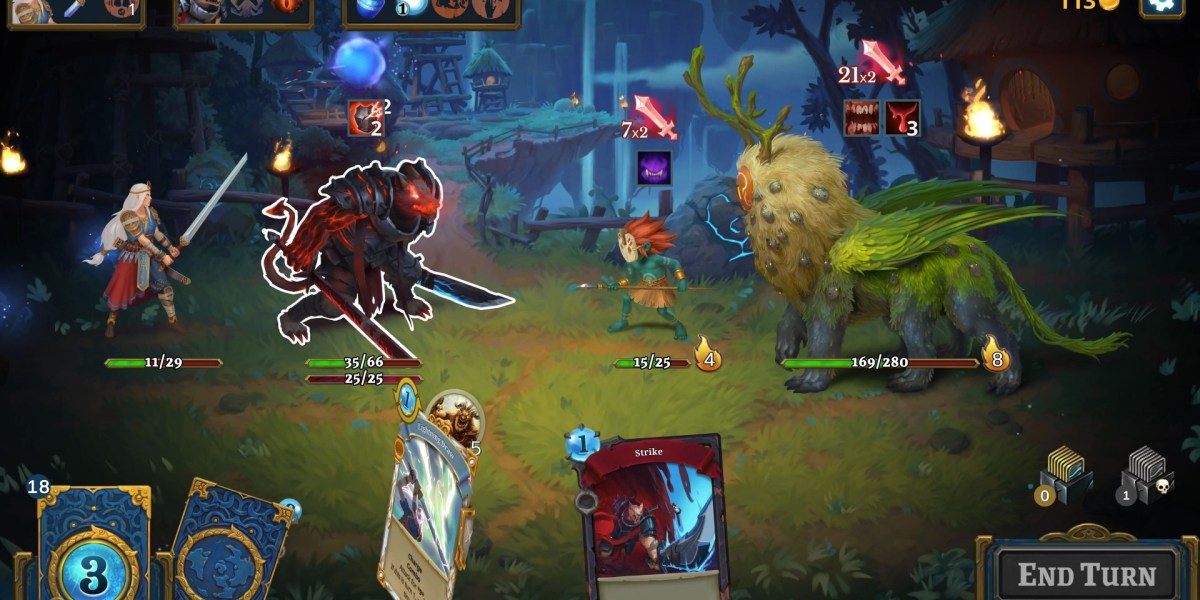 Deckbuilding games are not a new concept. In fact, at this point, they’ve been around for decades. While most of these sorts of titles were reserved for play around a kitchen table, finding a way to make the jump to video game form is all the rage as of late. The most recent attempt is a combination deck builder and roguelike by the name of Roguebook. Can this Kickstarted darling deliver on its initial sales pitch, or will it fall tragically short of fans’ expectations?

If there’s one thing that I’ve always disliked about the roguelike genre its the dependency upon your failure as a gameplay hook. I mean, who goes into a game with the goal of dying enough to level up their character? The last time I checked, the definition of insanity is doing the same thing over and over again, expecting a different result. Yet for whatever reason, in Roguebook, repeating the same loop doesn’t bother me so much.

There’s a reason why I didn’t want to pull my hair out from the endless repetition. It was partly due to the quasi-consistent progression between sessions in the form of unit leveling. Each character has a leveling bar that unlocks new potential cards and objects every time you ding a new tier. Along with this, there are also pages that you can collect to better flesh out the skill tree. Essentially, the level unlocks and progression, along the skill tree, are the only elements that carry over between runs.

A “run” in Roguebook takes place on a fairly standard hex-based grid, with a vast majority of the tiles/spaces being hidden. You cannot move across any greyed (or in this case, browned) out tiles. To traverse each stage, you need to use the paintbrush and inkwells to reveal tiles and allow passage.  You’ll want to use this ability to open up access to most of the map, along with a few dead ends to boot. You’ll find gold, additional card sources, and even key items strewn about the environment. The trick is, you have virtually no indication as to where a vast majority of these are hiding. 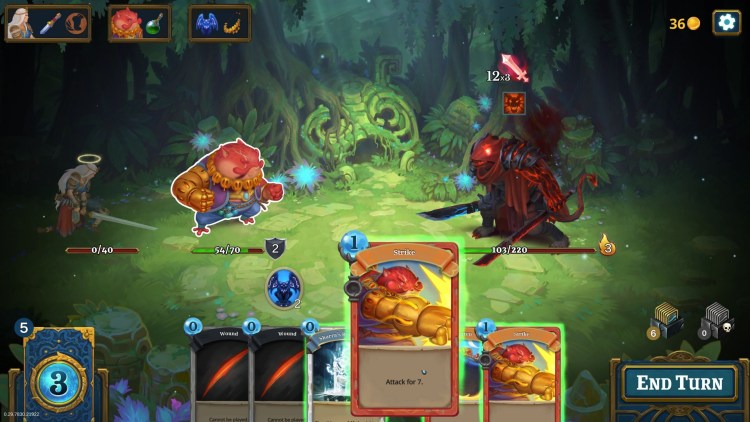 Each time around the horn, you start by selecting your partner, followed by updating the skill tree unlocks. If you have no other housekeeping that needs to be completed, this is where you dive into the shit, as it were. Early on, acquiring the cards needed to flesh out your deck is the modus operandi. You’ll need to do everything in your power to snag new cards because the base deck leaves something to be desired.

As you make your way around Roguebook’s stages, there are at least a couple of avenues for adding cards. Among them, you have the vaults of wisdom and the shopkeeper. Both approaches depend upon having enough scratch to afford their purchase. For a vault, you pay the standard fare of 25 pieces and are then presented with three potential card choices. Alternatively, you can also purchase single cards directly from the shopkeeper, at increasingly inflated costs. 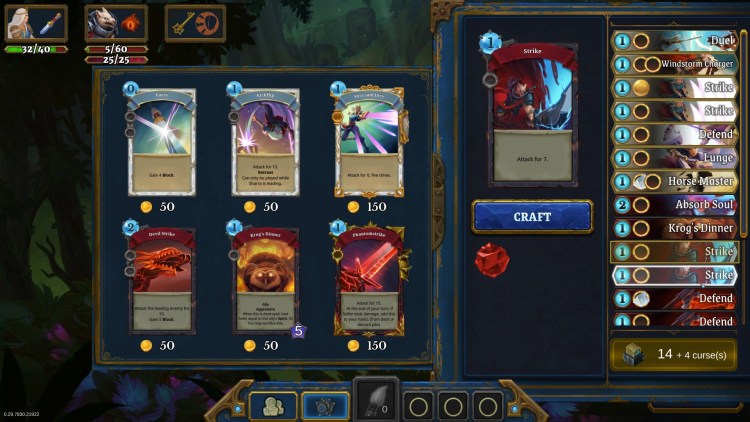 Depending upon your selected partner, the strategy you employ can shift greatly. I found this to be the most gratifying part of the experience, as it legitimately takes some time to establish what the go-to approach will be for each combatant. Strategy is also contingent upon the cards that you’ve had the chance to add to your deck throughout exploration.

The element of randomness is where things can get really interesting and sometimes, slightly frustrating. I can’t even begin to count the number of times that I had started a run with a certain plan in mind, only to take a 180-degree turn when the card options weren’t working in my favor. Eventually, I reserved myself to perfecting several strategies, because I clearly wasn’t always going to have the cards that I needed all the time. 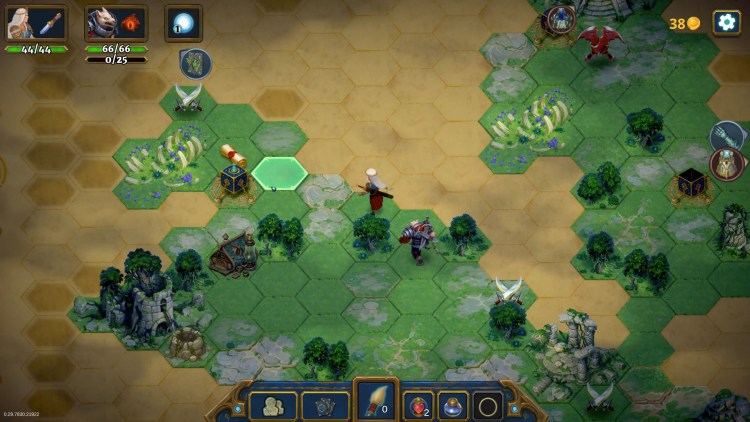 Amazingly, we’ve managed to make it this far into the review without talking about the actual combat. You can approach battles in numerous ways, most of which don’t even require going out of your way to fight non-boss enemies. By the time I had been playing Roguebook for several hours, I’d found a way to navigate directly to the boss battles in the first two stages, assisted only by brushes. No other side combat was needed. If you’re interested in exploring the game’s world and getting a bit more familiar with the current deck, several side battles can be initiated in each chapter. The trick is determining at what point the cost of lowering your character’s health is worth the potential payoff.

If you couldn’t tell, there is a shocking level of combat complexity going on under the hood of Roguebook. Everything from layered defenses to unique card combinations help give you a different experience with every run. For example, both defensive and offensive cards will force one of the characters to the front lines of the conflict. This unit will be the first to absorb damage if the incoming attack overpowers the shields. 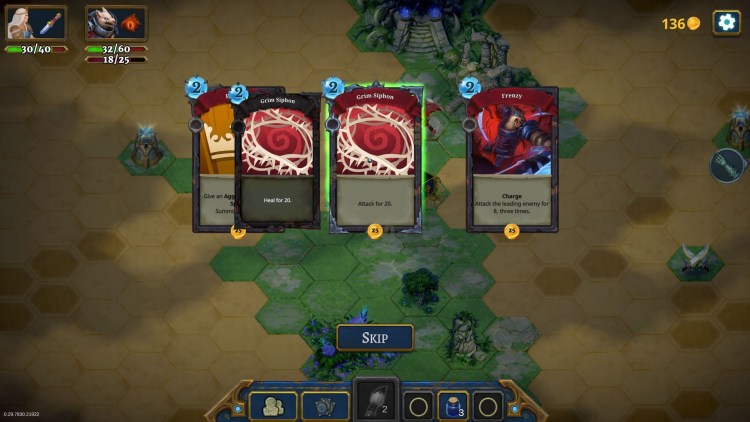 While character swapping plays into the strategy, it can also impact the way a card behaves. For example, there’s one card that will cause three points of damage for every time you’ve swapped player positions. It wasn’t out of the realm of possibility to see attacks that topped 40 damage by the end of a battle and even more if you made effective use of buffs.

Rage and courage buffs further modify the effectiveness of attacks. It’s crucial to pay attention to these elements to most effectively utilize each unit. Some cards even have mandatory buff levels that need to be reached in order to use them. Lastly, some minions are summoned from cards that can cause a variety of different effects such as additional buffs or direct damage to adversaries.

From the moment that you first dive into Roguebook, you quickly learn that the game is contingent upon one key concept: patience. If you’re a persistent person, content to re-grind your way through stages to build out your deck, you’ll likely enjoy the experience. Unfortunately, if you lack a certain level of fortitude, this is going to be a very tough sell. Your mileage may vary, but you might as well give this deck a serious shuffle.

If you have the patience, Roguebook is an interesting adventure, worth exploring. Players will be treated to a multifaceted strategy title, that keeps you guessing constantly. Why not have them deal you a hand?