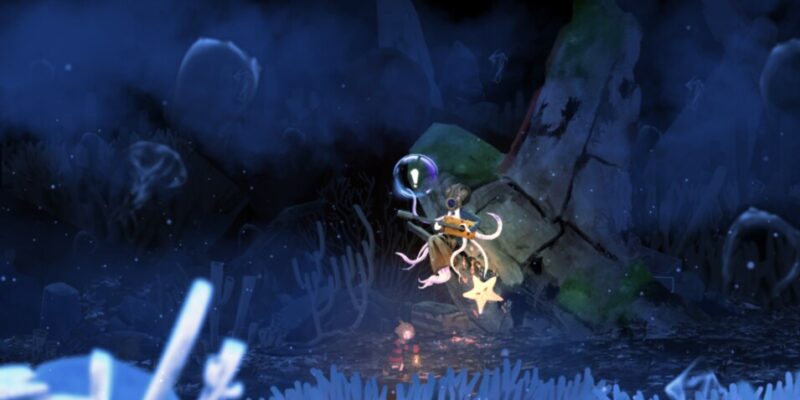 The ocean is a dangerous and considerably damaged place. Decades of pollution have made the once flourishing aquatic seas a wasteland — a horrifying display of industrialization and humanity’s general lack of caring. Plastic lines the floors of the sea, alongside wreckage from cruise lines and airplanes. The ocean is under attack, and Samudra exists as a cross between a platform to raise awareness and a video game. It makes sense that Samudra won an award from Unity for Humanity, a platform created to change lives and make an impact. But, it doesn’t always stick the landing in video game form.

Samudra is a puzzle/platformer that utilizes the folly of a polluted ocean to its advantage. A line of plastic rope acts as a barrier between you and your path, which you may end up clearing by moving aside a sunken laundry machine. You run and escape from deadly sea creatures until they can longer chase you — crushed under the immense pressure of fallen shipping containers. Samudra exists to illustrate a real problem, but there’s a tricky line to cross during its desire to double as a gaming experience.

The motion of the ocean

For what it’s worth, simplicity is the name of the game for Samudra. The gameplay feels stripped down to the basics, with only a few mechanics present at all. The main character, a little boy who found his way to the bottom of the deep sea, can only be controlled with five buttons. The majority of the time, you’ll be moving from left to right with A and D keys, sometimes climbing up a rope with W and S. Also, you perform all your actions with the press of a spacebar.

The limited actions available to you undeniably impact the intricacies of the puzzles, to the point of undeniable confusion. There’s a large stretch at the beginning of the game simply comprised of quick-time events, to the point where interaction feels incredibly limited. Some of the puzzles require little involvement at all. Many parts of the game only require you to burn rope blocking your path by mashing the spacebar. Some moments require a bit of stealth, as you weave your way through spotlights and other underwater beings, but those moments too are remarkably simple. It’s not a particularly involved experience, and even sluggish at times. But at a certain point, you understand that the game isn’t a traditional puzzle experience.

The amount of work put in to make Samudra beautiful is evident. The game is a beauty. The hand-illustrated graphics give the game a storybook feel, combined with the surreal moments of rescuing a giant sea mermaid or escaping from a massive deep-sea creature. There are so many little touches in the game’s different environments. Plastic bags diffuse into the water, masquerading as jellyfish with a soft glow. Gloves and surgical masks float around you, living alongside the fish in this deeply polluted ocean. The soundtrack too is at times gentle, other times ominous, but always fitting. 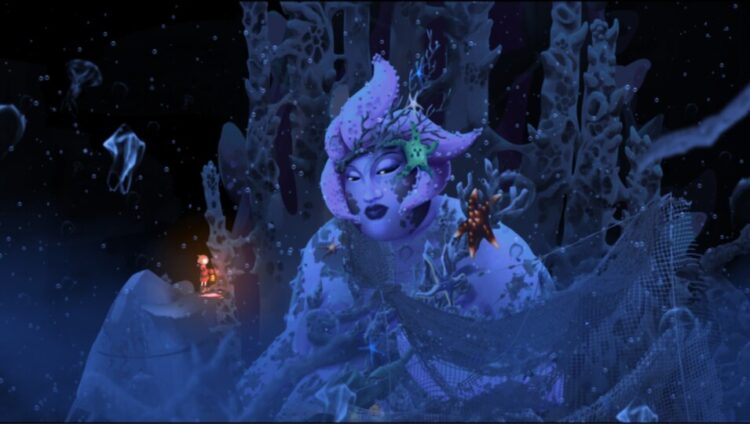 Story beats progress at a brisk pace, with the complete absence of dialogue. Instead of dialogue, we get conversations in the form of thought bubbles — cute, animated images that give us an idea of what’s really happening. It’s a style that mostly works for this type of game, lending itself to a gentle experience. It’s certainly more accessible too. Ultimately, the game doesn’t exist for the gameplay at all really. It functions as an engaging experience, but disappointingly, something to view rather than interact with.

But, your mileage may vary in that department, too. The total lack of dialogue, opting instead for atmosphere, makes the actual story somewhat tedious. It’s never particularly difficult to digest, but some of the emotional beats don’t carry through perfectly. It’s a design that can work for or against you. As it goes, it fits right in the middle for me.

There’s so much to respect about Samudra, and the game is never demanding. Samudra does have some replayability in mind, with collectibles and a couple of different endings. But, one has to wonder if the game couldn’t be a little more thoughtful with its mechanics. I wish we saw more of the ocean and the impact of the pollution, with a little more creativity on the puzzle designs.

But all-in-all, Samudra is pleasurable and very noble. Clearly, a lot of thought and care was put into this game. And while that’s not always enough, Samudra is good enough to recommend for a cool price of $10. The water is not always so fine, but you should still give the game a chance if you want something that’s not so demanding.

Samudra never makes any major waves but is still an enjoyable, gentle journey.